Zigzag17
2 years
Decided to do a story with Arsenal. Wenger's invincebles we're one of my favourite teams, So I'll be trying to return Arsenal to their former glory. So, with that short intro out of the way, let me jump straight into it...

Preseason & Transfers
My aim will be to carry on Wenger's legacy of promoting and developing youths. But reasserting the club into the top 4 and Champions League is the more pressing issue. The club transfers reflect this..

OUT
Rob Holding and Calum Chambers go out on loan hoping to gain some first team experience and challenge for a squad position in the future. The major transfer out is Danny Welbeck. Man City were showing interest for him, and I was happy to let him go for 22mil to fund some of my additions

IN
With the need to challenge for the top 4, strengthen the squad was paramount. Giorgio Chiellini comes in to boost the defense with quality experience. Danilo Pereira comes in to strengthen the middle and provide us with more physical presence. Our major transfer for the window is Nabil Fekir who should take the RW position for his own. 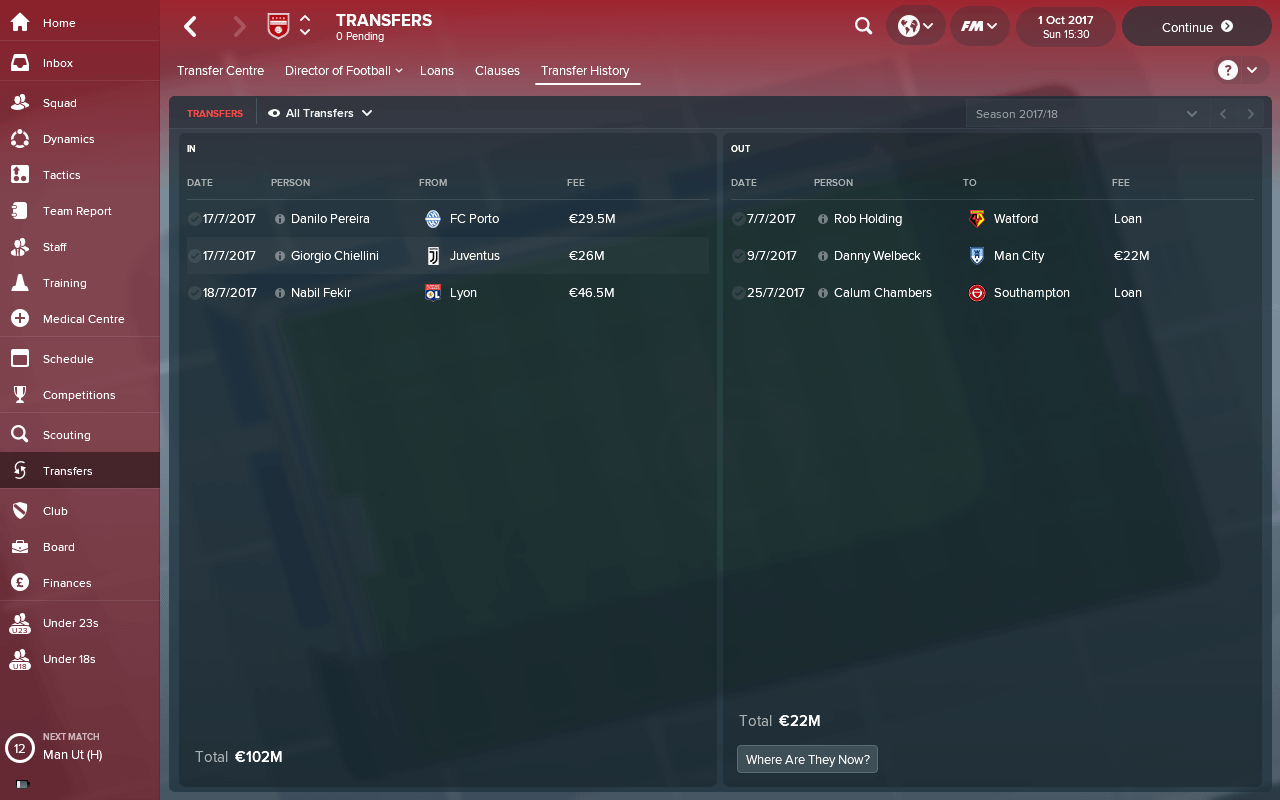 Not bad at all. Should be a comfortable progression.
Login to Quote 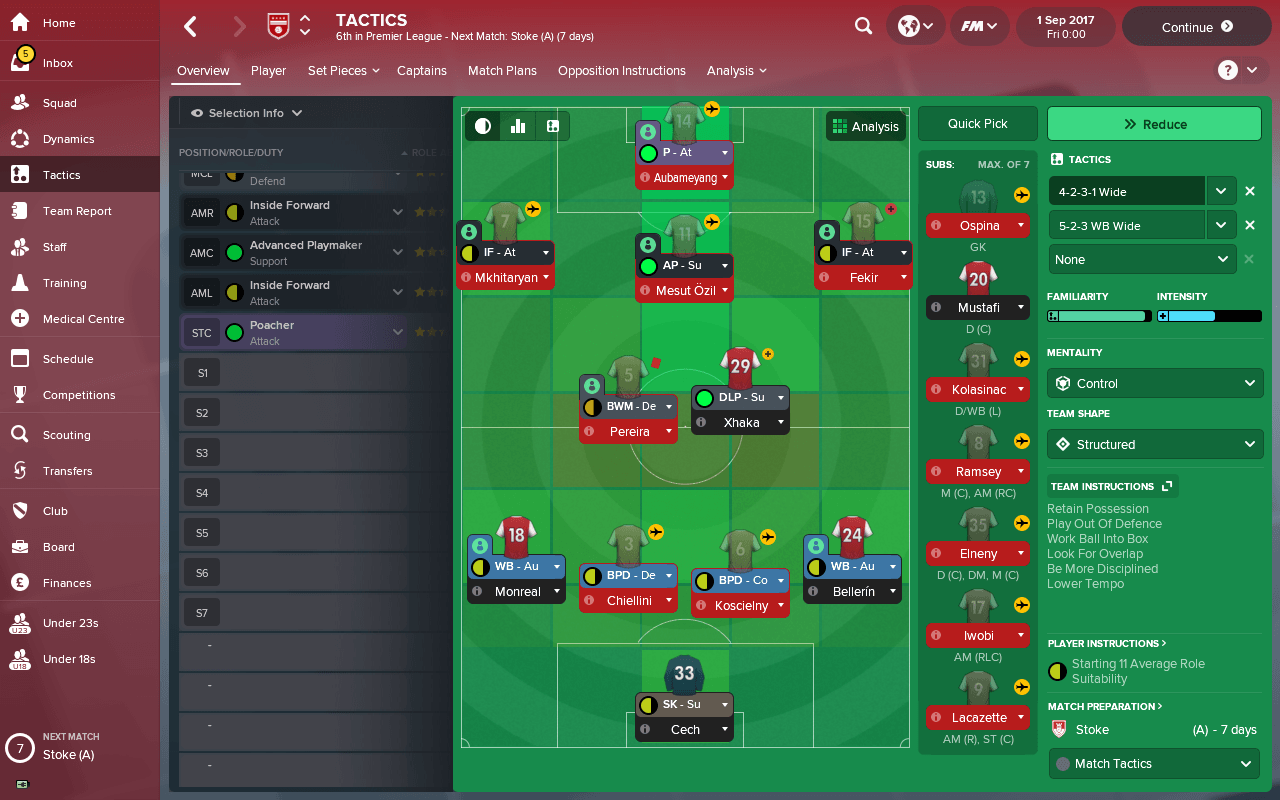 My planned starting lineup for the campaign. Fekir got injured early on which threw a wrench into my plans. So Alex Iwobi will have to step up for the first 2 months.

1-3 vLiverpool (A)
(Mkhitaryan)
Pereira gets a red card in 3 mins which allows Liverpool to run through us. Poor start to the season, but it was always going to be a tough one against them at Anfield.

4-2 vSpurs (H)
(Aubameyang 3, Iwobi)
We bounce back instantly to take down our London rivals. Very tough start to the season but 3 out of 6 isn't so bad, especially considering the favourable fixtures we have coming.

4-2 vSwansea (A)
(Mkhitaryan 3, Iwobi)
Tougher than the result would say, but the boys pulled through. Great performance from Mkhitaryan.

2-1 vVitesse (H) (EL)
(Iwobi, Lacazette)
Good performance considering that Mertesacker had us down to 10 for most of the second half.

1-1 vChelsea (H)
(Mkhitaryan)
Another tough result against Chelsea. We dominated possession but weren't able to make it count. Hazard was a pest as usual, but Bellerin managed to limit the damage.

p1-1 vBrighton (A) (LCup 3rd Rd)
(Aubameyang)
I don't know why we needed penalties to put win this one, but atleast we did.

3-0 vHuddersfield (H)
(Iwobi 2, Aubameyang)
Iwobi continues his fine form. Huddersfield were down to 10 for the second half and they never looked like challenging us.

2-0 vYoung Boys (A) (EL)
(Lacazette 2)
Great performance as we continue our fine form to start the campaign. 8 games without defeat!

1-3 vBrighton (A)
(Mkhitaryan)
And then it all came to an end. Our apparent bogey team shocks us with a classic counter-attacking performance. We were in with a shot at ending the period in 3rd place, but this result has us chasing the pack.Terrible result.

Review
Overall a decent run. The Brighton result was horrible, but we have another favourable run of games (after United who we face next) up until the christmas period where we end the year with a triple header against City, Liverpool, and Spurs. 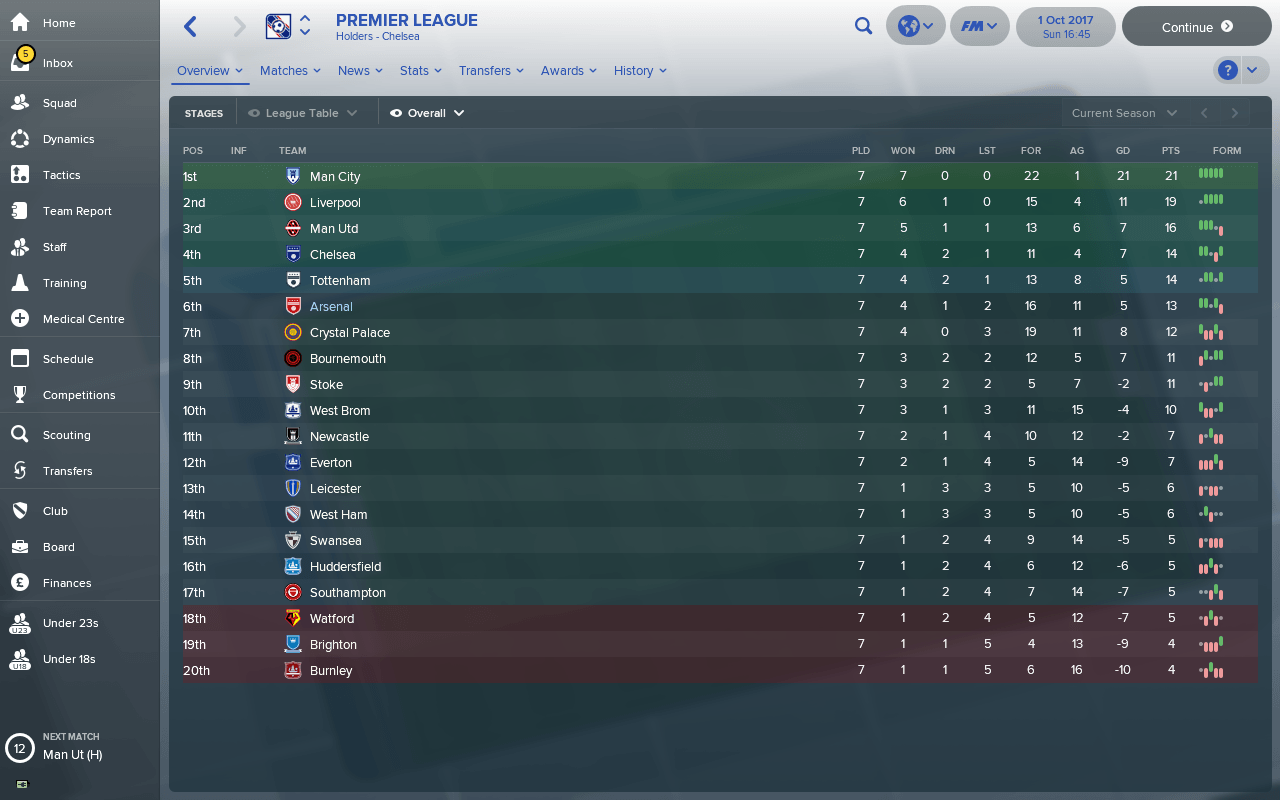 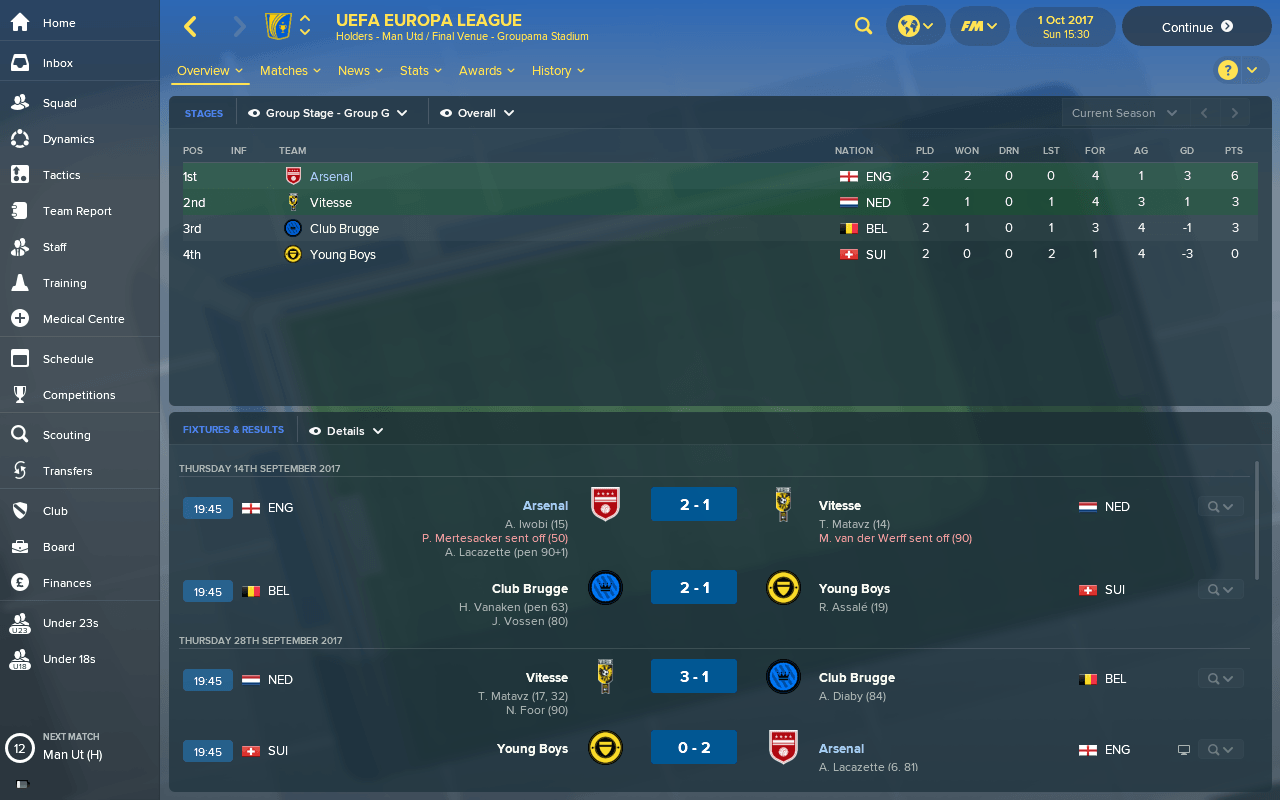 Best Player: Alex Iwobi
Iwobi ends the period with 5 goals, 5 assists, and an improved contract. Would've never bet on him to be the star for us at this moment. Will be interesting to see whether he can continue his form and fend off Fekir who returns from injury soon. 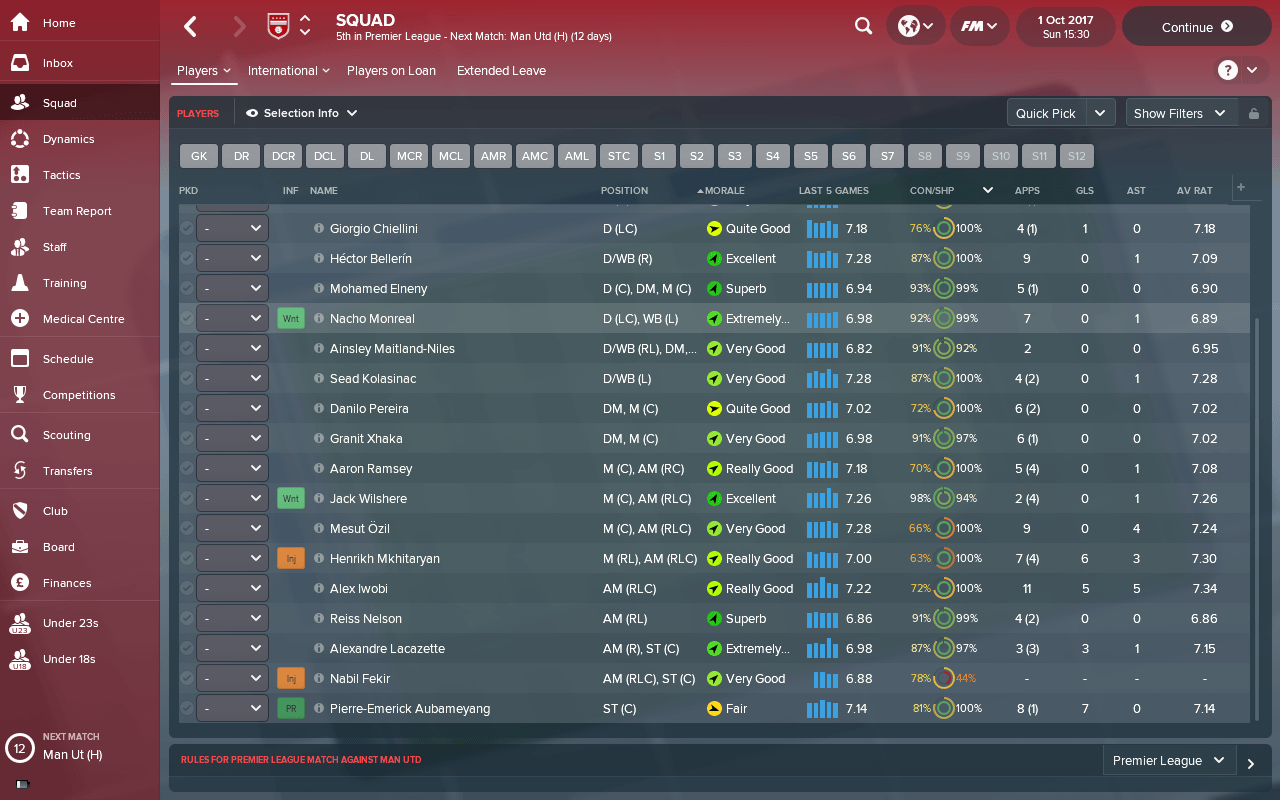 Schedule
3-1 vMan United (H)
(Iwobi, Chiellini, Aubameyang)
Crucial result, helped mostly by Valencia being sent off. Before then we were down one facing the same issue of controlling the game but not taking our chances. Fekir returns to make his debut, but Iwobi gets MoM to keep him as a backup for the time being.

Update
Finalized a deal for Andre Gomes from Barcelona

2-0 vClub Brugge (A) (EL)
(Wilshere, Lacazette)
Took a while to break them down, but the game was always comfortable. Iwobi putting in another MoM performance with 2 assists.

0-0 vBournemouth (H)
With a shot at going 3rd behind runaways City and Liverpool, the team absolutely screws up the chance. Considering dropping Aubameyang as his link up play has been poor.

1-0 vBurnley (H) (LC 4th rd)
(Aubameyang)
Wasteful finishing keeps the scoreline low. Lacazette gets injured too, just as I was considering him as my number 1 upfront.

2-0 vClub Brugge (H) (EL)
(Aubameyang, Wilshere)
3 in 3! Qualification secured in a group that we were always going to breeze through.

Update
Wilshere has been getting interest from City and he's come to ask to leave so that he can play Champs football. He's currently backup to Ozil, but I'd still rather not let him go.

2-1 vSouthampton (H)
(Mkhitaryan, Ozil)
Good win against the bottom team. After dropped points for some of the top 6, we make it to 3rd.

2-2 vEverton (A)
(Mkhitaryan, Aubameyang)
What's disappointing about this result were the the soft goals conceded and the 5 clear cut chances we couldn't make the most of (including a last minute 1 on 1 that Fekir squandered).

1-1 vVitesse (A) (EL)
(Fekir)
Another disappointing game, but with top spot secured, my main focus will be the league.

2-0 vWest Brom (H)
(Ozil, Mkhitaryan)
Routine win. Iwobi still being a champion with 2 more assists. Unfortunately, he picked up an injury keeping him out for about 2 weeks.

Review
Overall a good month, but our failure to capitalize on a run of games that only included 1 against the top 6 will hurt us. We're stuck 5th heading into a tough run. We've conceded 17, 4 more than any of the other top 5. Looking at the form of the top teams makes things worse. If we're serious about asserting ourselves into the top 4, we should be taking our chances. Our next 4 have to be wins because after that, we face the top 6 in 5 out of 7 games.

Liverpool have done well to overtake City and climb into first place. Spurs are slowly slipping whilst Stoke surge into 6th.

At the bottom, West Ham look woeful whilst Brighton make me wonder how I happened to lose to them

Europe has been better. Despite our draw to Vitesse, we've topped the group with a game still to go. I feel as though top 4 is more possible through the league so even when the knockout stages come around, I'll still probably put more emphasis on the league games. 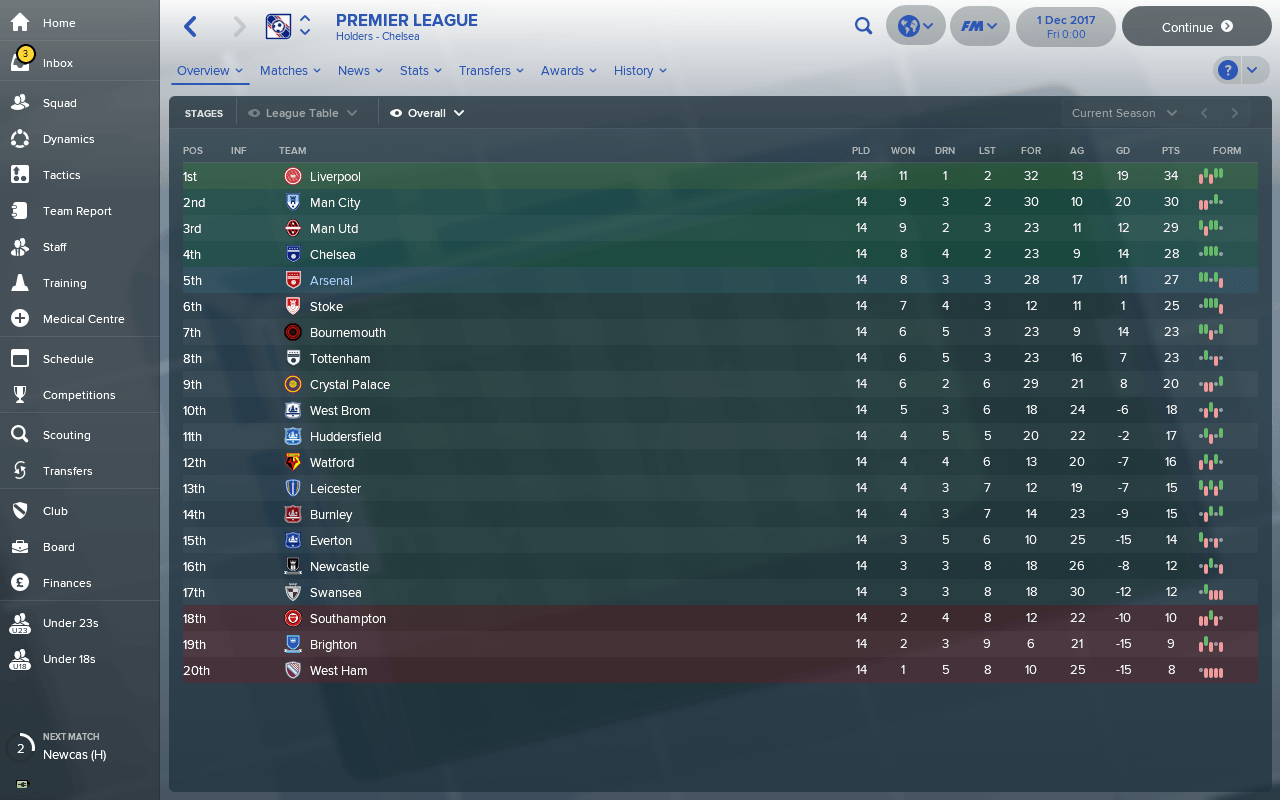 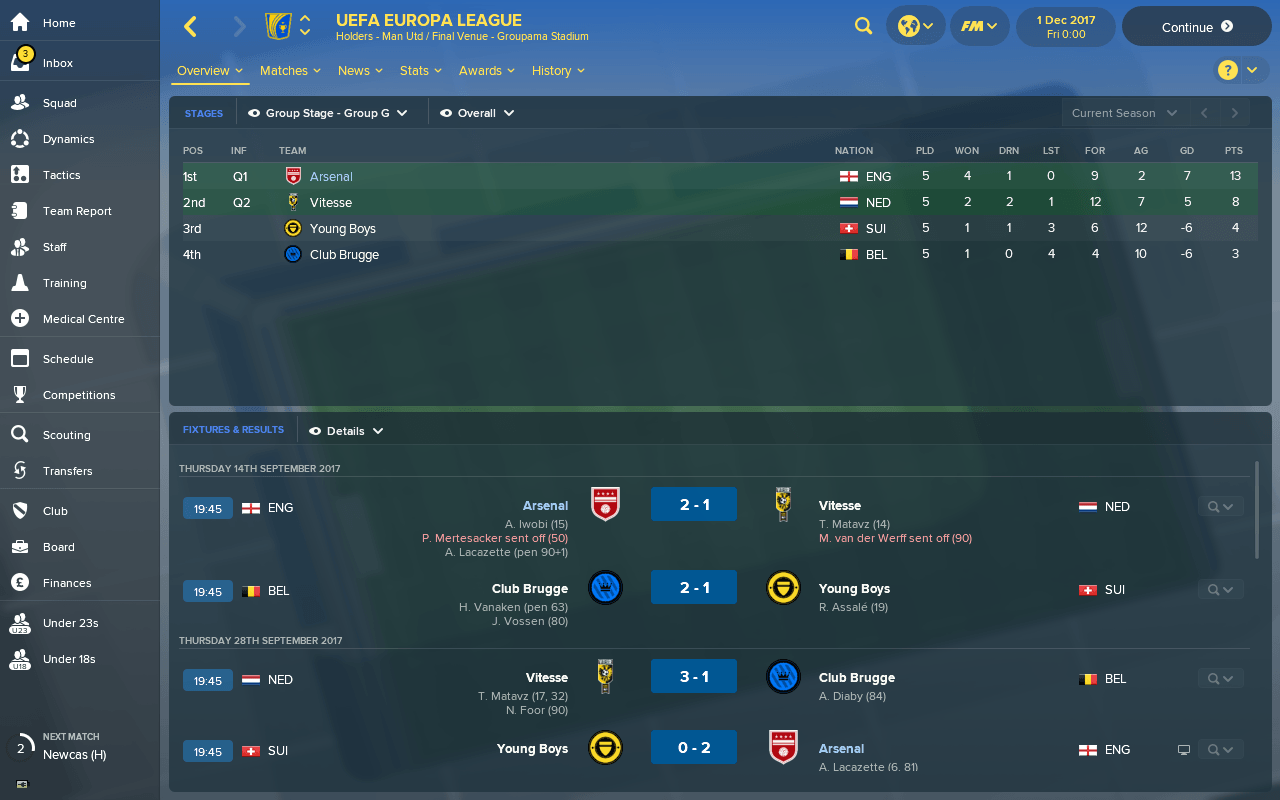 Best Player: Alex Iwobi
This was a close one between Iwobi and Mkhitaryan, but I have to give it to Iwobi. Mkhitaryan's goals have been big, but Iwobi has been the most consistent performer, assisting on 7 and scoring 1. His absence against Burnley may highlight his importance to the team at this moment. 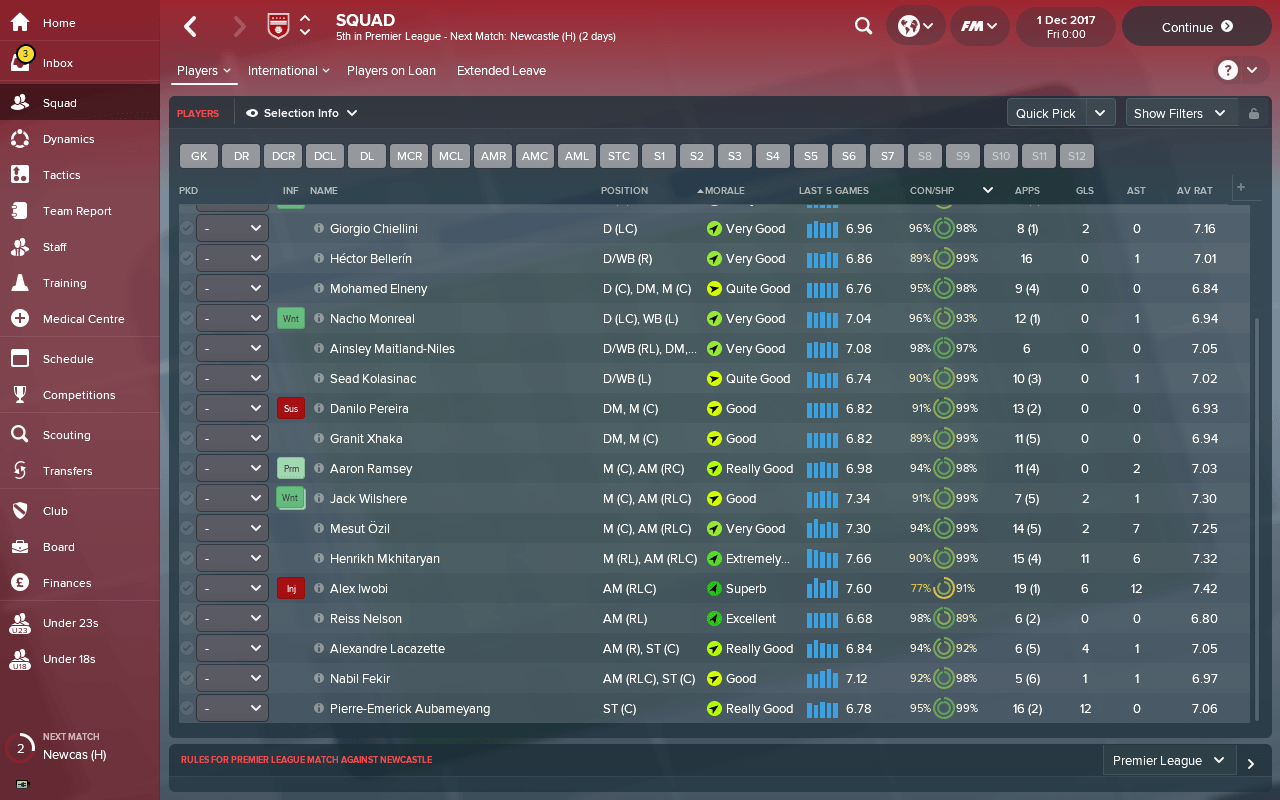 You are reading "Shooting Blanks: A Gunners Story".