JosephCurtin
4 years
Indie horror games tend to pull players into their odd worlds and force them to search about for clues, all the while facing a nameless threat we can only hope to outwit and outrun.

The developers behind Apparition try their hand at this formula by giving players the role of a paranormal investigator working a case at a small campground called Green Creek. The player chooses what tools the investigator takes with them to learn about the spirits haunting the area, and a few them provide protection.

The big downside about Apparition is the game mechanics because the investigator can leave the site at any time to return later. This effect discourages players from taking substantial risks in favor of earning more of the game's currency, leaving the area, and then returning with new, updated equipment they can receive with little effort.

An Investigator's Tools
The story begins with the paranormal investigator breaking down the basic story of the game -- they've learned about Green Creek's rich history for many years now. During the early 2000s a murderer known only as Plague had been killing many people in the area, and many tourists who visited who were once believed to be missing are assumed to have become the killer's victims.

Though, our investigator is not convinced. They plan to document any strange phenomena in the area, record it, and then return to sell it for a decent amount of cash. 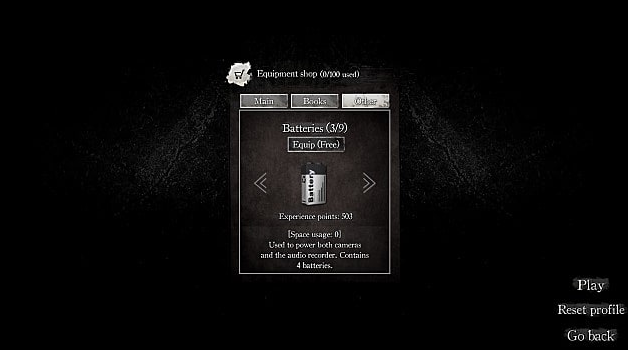 At the start of the game you choose from a list of various tools to take with you. These items vary from a camera, lighter, Ouija board to speak to the dead, helpful guidebooks, a crowbar, lockpick, and much more.

You can only carry so much on you, and each item comes with a predetermined weight. You have to choose wisely, and you won't acquire all of the evidence in a single run.

Cumbersome Gameplay
After you've chosen the tools you want to take with you, your character arrives at the camp area, and it's your job to explore it in the middle of the night. Your goal is to communicate to the dead, and the only way to do that is to take your Ouija board, a required item, and bring it to the single campfire in the area to speak to any spirits that may be nearby.

Though, to speak to the board, you have to locate small sheets of paper scattered throughout the area with questions written on them. Already this game mechanic feels like a forced way to have you run into any dangerous foes that are lurking in the shadows. Because who needs to find sheets of paper to think up questions to ask an Ouija board? Unfortunately, it's how you progress. The more questions you ask, the more evidence points you receive.

To accurately record the evidence you need to have brought along the tripod and camera, which your character sets up with the Ouija board. Every time your character asks a question and you receive an answer, you collect evidence points. These act as your currency, granting you access to higher quality equipment, such as a camera headset that contains unlimited battery life and records everything you see. 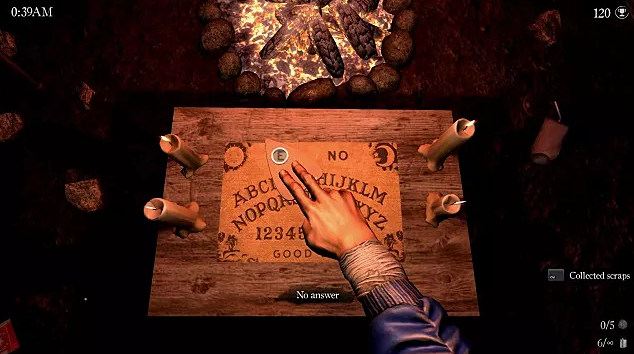 There are more ways to capture evidence. When you're first starting, you'll only have access to a simple camera. If you catch a spirit or suspicious figure in the distance, take a picture of it, and you'll document the find. You'll find that this way is more troublesome, and undoubtedly dangerous, as some of the figures you see are not the most friendly. Also, some of the stuff is too dark to catch on camera making the Ouija the best source for evidence points during most of the game.

Gaming The System
The game feels like a lot of trial and error. Your character can stay for however long the like, collect what they need, and then leave. After you leave, the evidence points you receive go to you to use to purchase new equipment. You then return to the main menu and start all over again. However, any new tools you unlock with evidence points remain unlocked, and when you're back at the campsite, you'll still have all of the sheets of paper you collected from any other game session.

For a player, this means you can rush to the Ouija board location, set up the tripod, ask as many questions as you feel comfortable, and then leave, over and over again. It's a great way to acquire as many points as you want to aim for the higher quality items and continue the investigation. Because you can leave immediately, any threat the monsters may have goes away, especially when acquiring the better items becomes as simple as having a high amount of patience.

Because you have a weight system to consider each new round, you won't be able to directly complete everything you need to do in a single run. You're motivated to leave the area and return. During my playthrough, I only perished once, and it was because I was curious what a demon was going to do if it caught me.

Another major problem is there's no apparent end goal. While my character routinely captures these creatures on camera and shows their presence to the world, they return to Green Creek over and over again, as if he waiting for something new to happen, when there's not much there.

Little Frights and Jump Scares
While you use the Ouija board, you're likely to hear various sounds in the distance. Distinct growls, moving bushes, and many other noises during the pitch-black night.

What you need to remain aware of are footsteps. These immediately give away anything coming at you, and if you hear those, you have the option to record and collect evidence about whatever is about to get you, as you run to your car. Again, having the ability to leave at any time downplays all of the horrors going on around you. 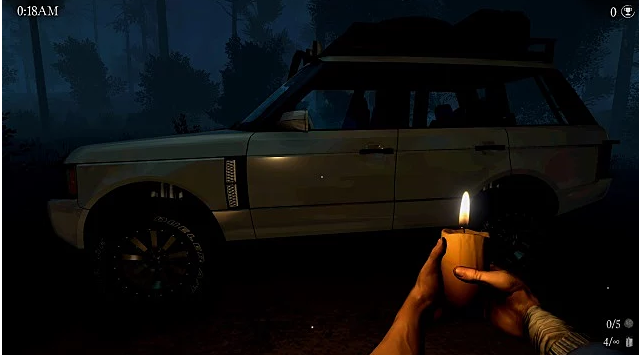 One thing that the game does do well is with jump scares. Every so often you're bound to be briefly visited by a ghostly figure that appears in front of you for a single second, followed by intense music and your character's pumping heart, but that's about it.

As soon as you grow accustomed to seeing the figure and you know what to look for when an enemy is approaching, all of the horrors washes away, and you're able to focus on acquiring evidence points. If it were not for the scary music, the dark environment, or their odd shapes, they'd be more akin to dangerous creatures you're trying to capture on camera than supernatural forces you have no practical idea of how to handle.

There's also a small crafting system in the game you can use to lure demons to your location, capturing them on camera with more advanced equipment. There was an obvious intent by the developers to create a unique horror experience, but they missed their mark due to the shallow and repetitive gameplay.

The Verdict
The Apparition had the potential to become a popular Indie horror title with the interaction with demons and the Oujia board. But it turns out it's a slow, shallow game with little to offer, except for the same thing over and over again. There's no apparent end goal, except to find as many scraps of paper as possible and communicate with the dead, or demons, who haunt the empty campgrounds.

The game doesn't even make for a good Halloween game to pass around to your friends at a party.
Login to Quote

You are reading "Apparition Review: There and Gone Again".