ScottT
6 months
Good work there. A tough loss against Arsenal though.
Login to Quote

Again, come unstuck vs a very good Spurs side. We performed better than the Arsenal game, but still not good enough, losing 1-0 to a Kane 88th winner.

Did well in the cup competitions. Didn't really rotate that much, which wasn't that great.

Sitting in 3rd which is what my goal is, but losing to Arsenal and Spurs in that fashion isn't a great sign 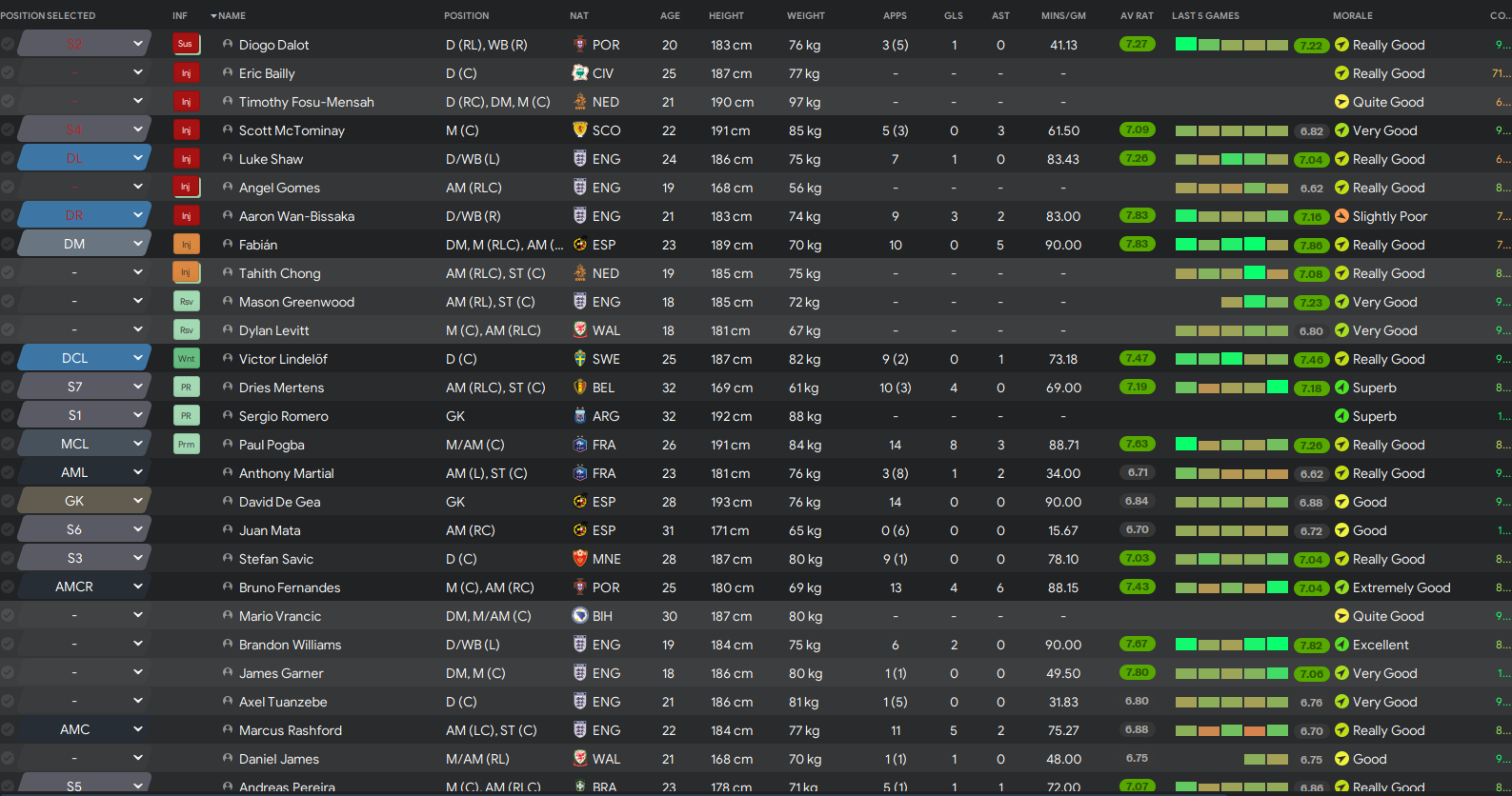 Injuries are the name of the game at the moment. Looking at some depth players for sure in the January market. LB is an issue I need to address and maybe another forward.

Martial made his first start in 2 months vs Torino, so could be good things to come. Still one to monitor.

Only 3 games played between them this month, will update next month.

James Rodriguez' price has dropped below 30m. Starting to become quite tasty. Only thing would be the wage.

Reports have been updated for our youth players. Talles Magno, Thiago Almada, Ryan Gravenberch, Bruno Amione, Tomas Esteves are the 5 that are performing extremely well. Bukayo Saka is one who I'm monitoring for that LB position, but would probably be extremely difficult to get hold of.

Easier month, but on a bit of a road trip. See how we go.

Over the last couple of months, I've seen an emerging trend. We lose out on possession almost every game. I'll use 2 of the more recent games as examples. Arsenal in the Carabao Cup and Torino at home in the Europa League, both games we won. 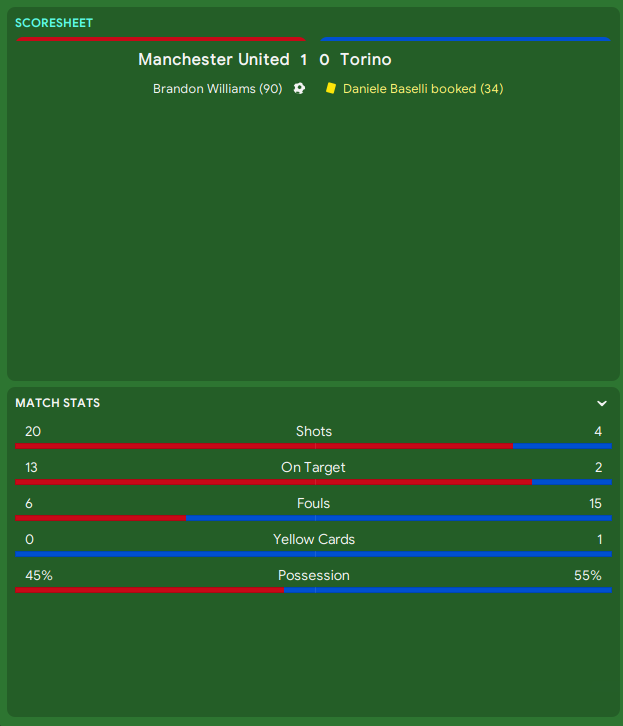 Vs Torino at home we had 45% possession compared to Torino's 55%. However we won every key relevant stat that goes into winning games. 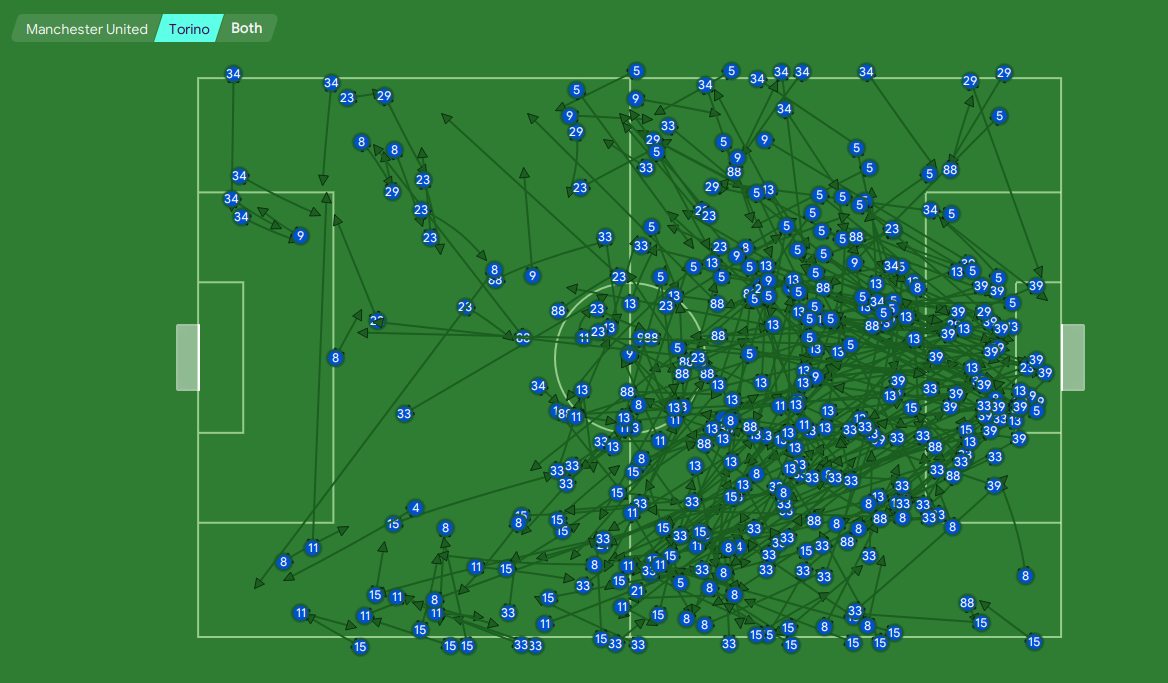 As you can see, even though Torino had 55% possesion, their threat is almost non existent.

out of their 383 passes, this is how it breaks down.

Take a look at the heat map 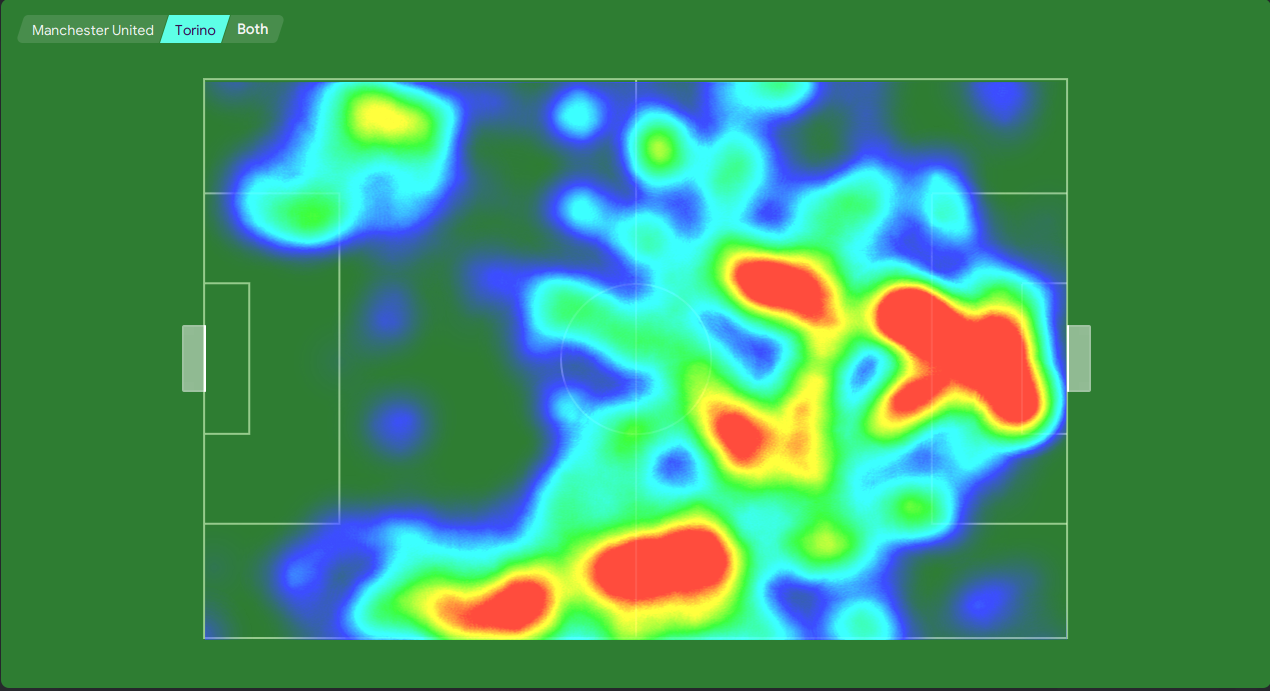 Lets compare that to us 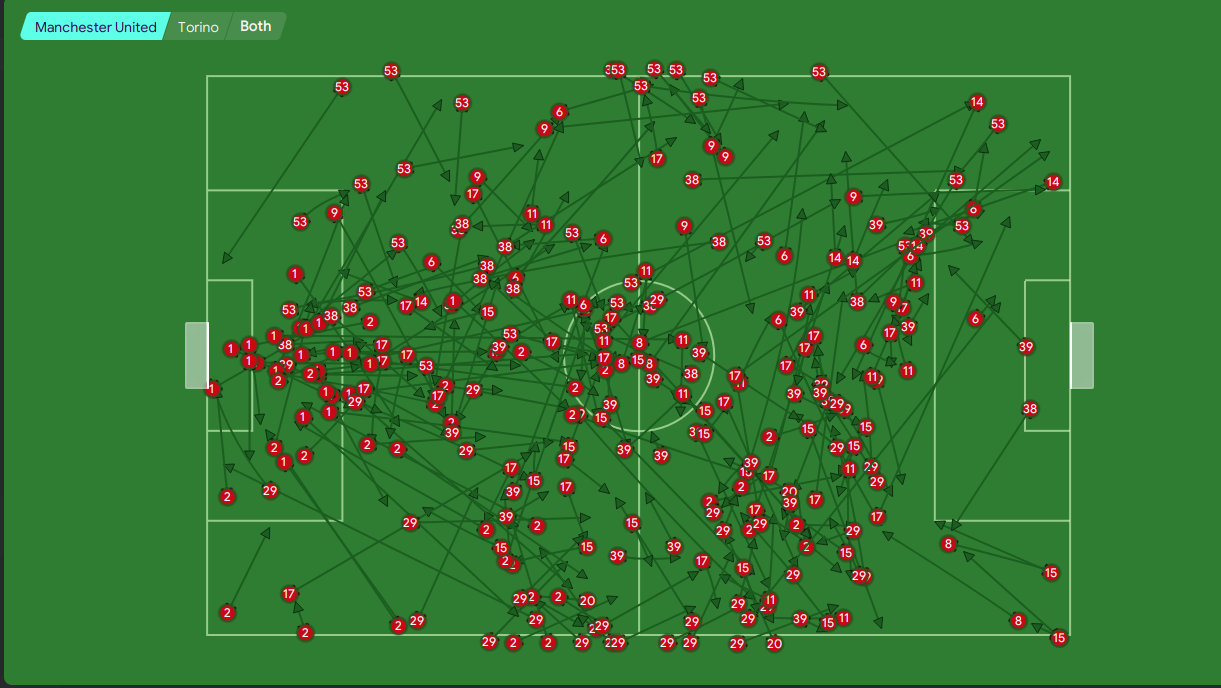 We completed 258 passes. Broken down 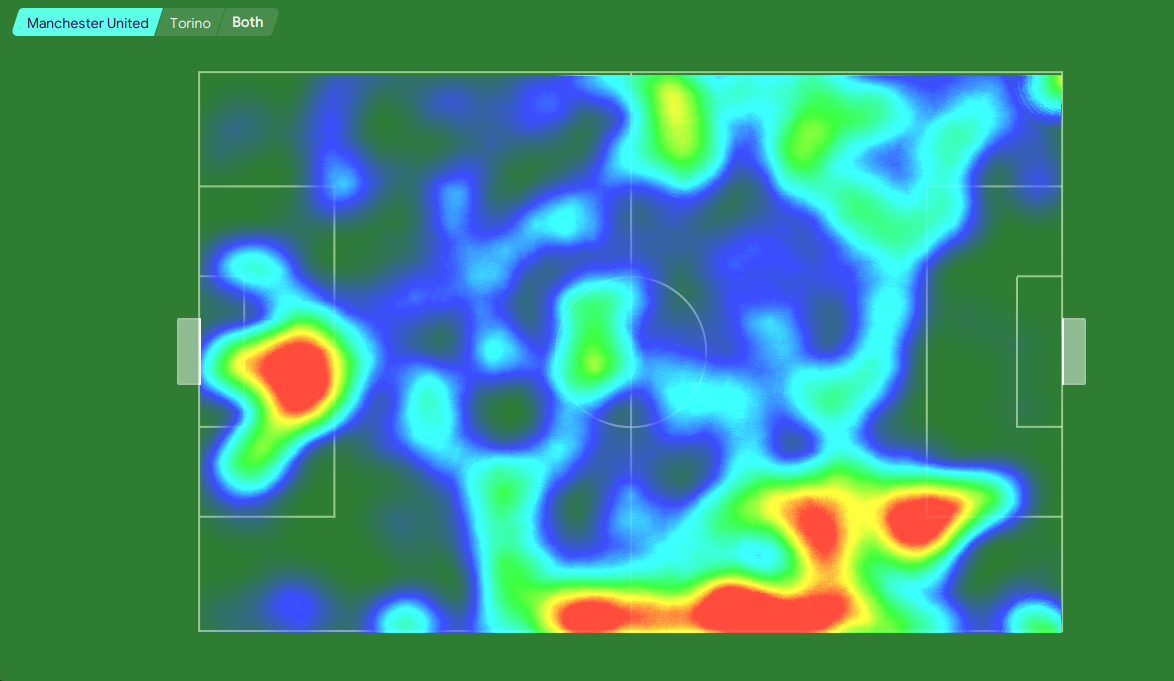 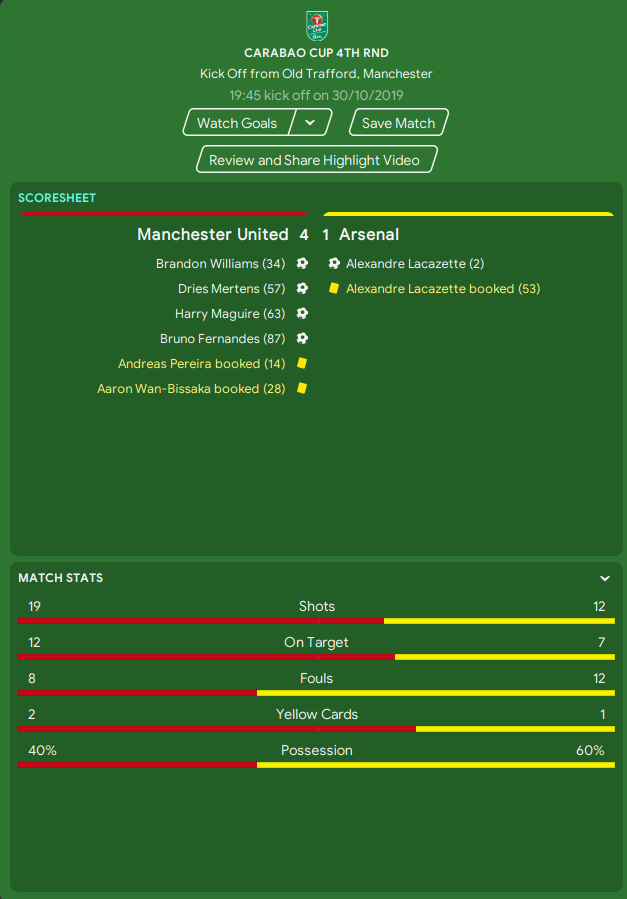 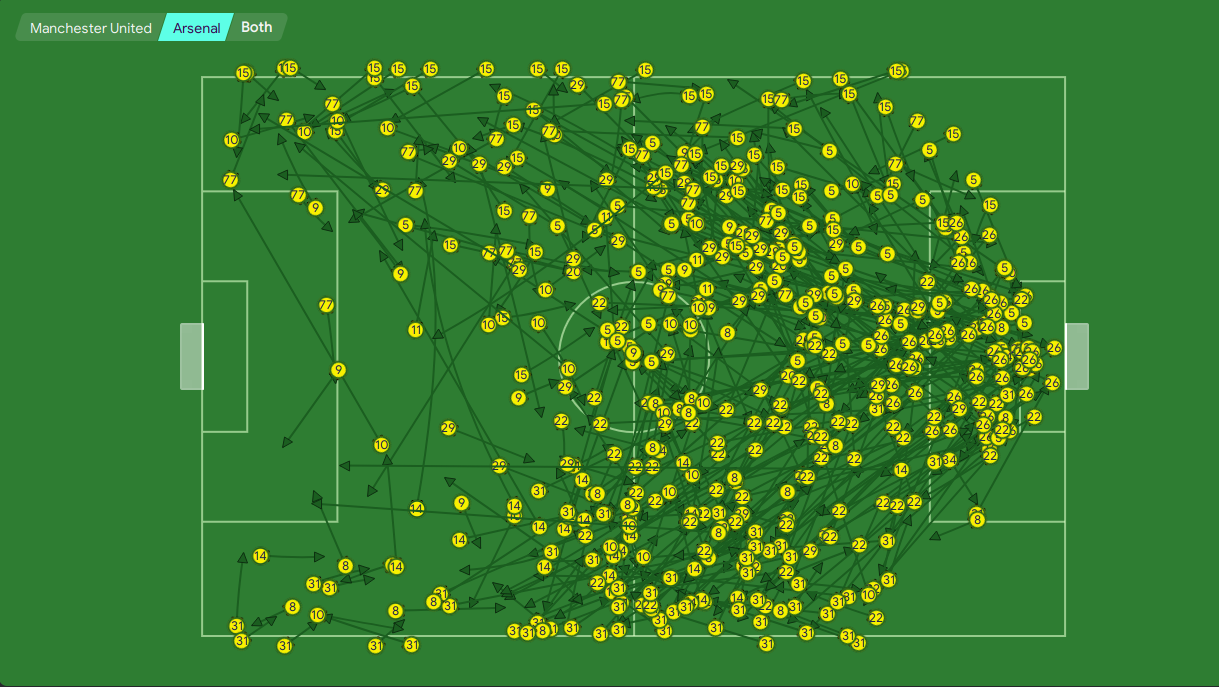 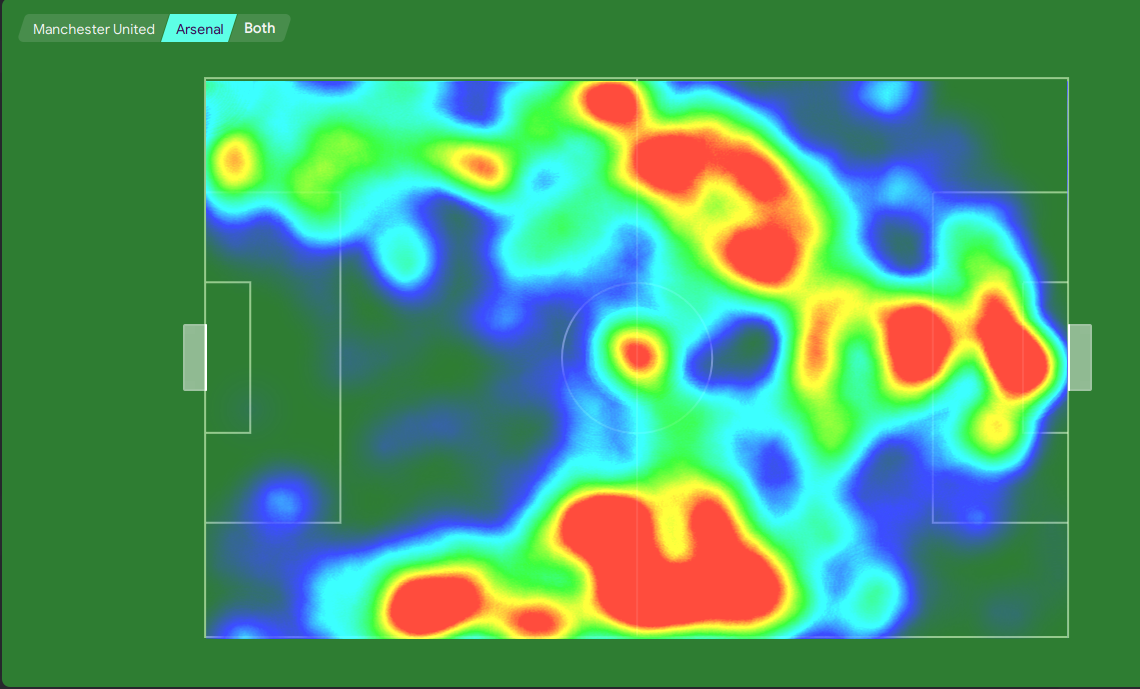 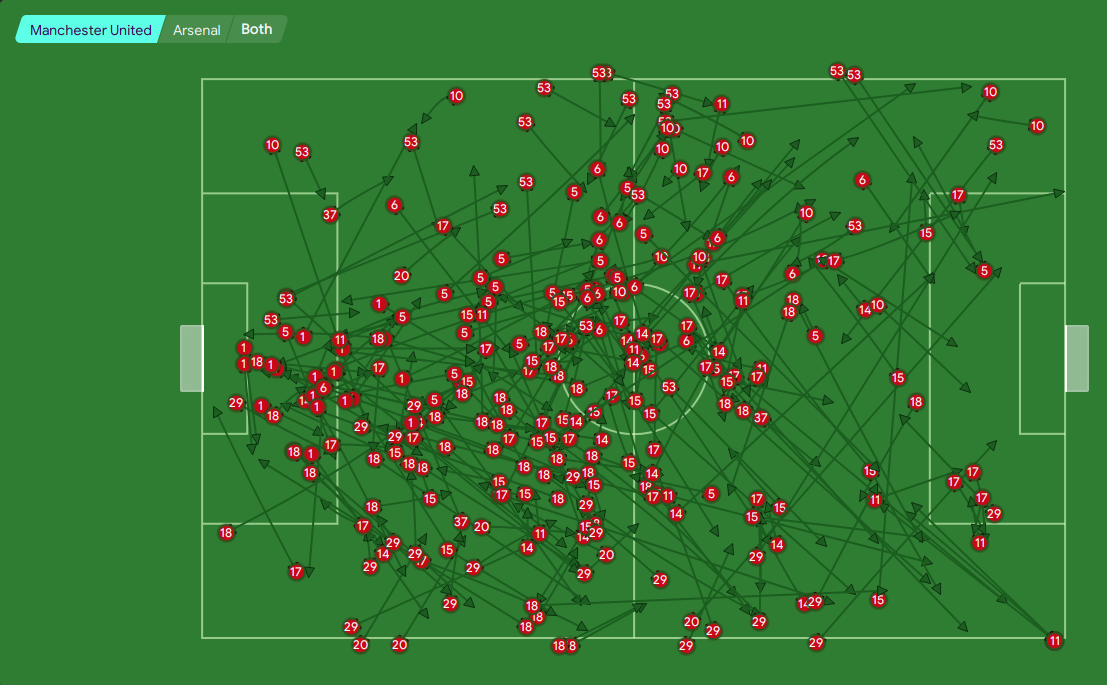 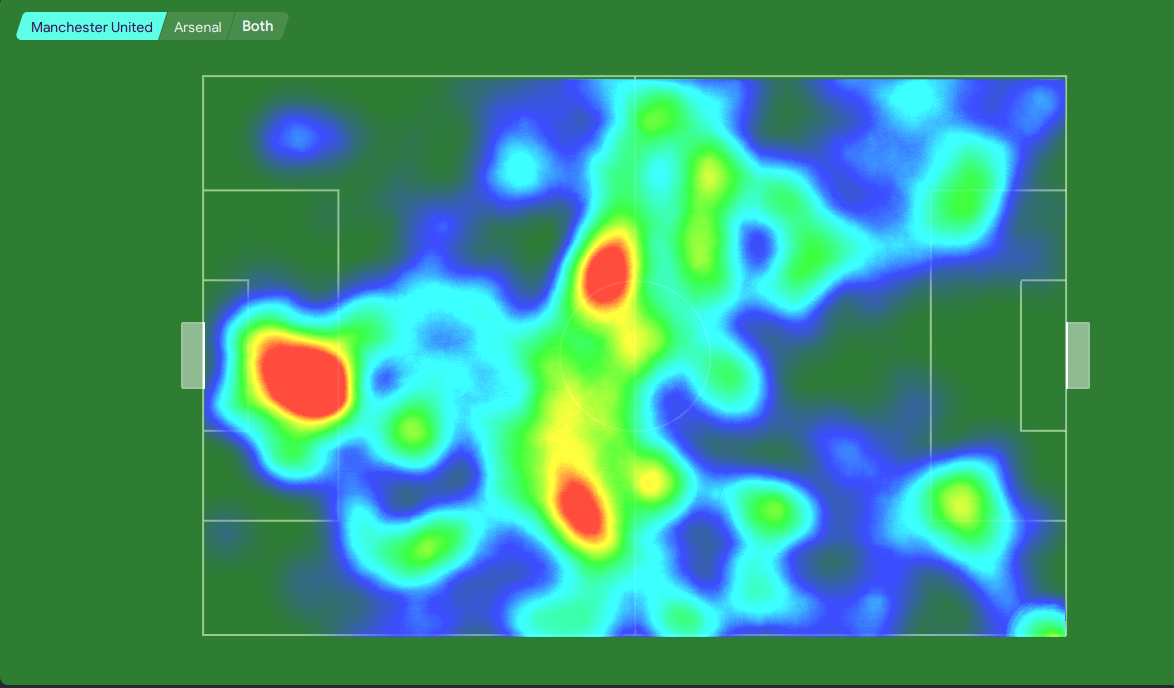 Even though we lose the possession battle, we keep the ball out of dangerous areas. Having a the bank of 3 forwards as our immediate press who sit a lot deeper without the ball, makes forward, accurate passes difficult to complete. I'm more than happy losing the possession stat since it results in them passing it sideways or backwards in their own half a lot.

We are a lot more direct with our passing and using our IWB on the right hand side is extremely effective as you can see from the heat map. Will do a write up the important on the IWB at a later date.

I'm extremely happy with our tactic at the moment. The way that we are setting up defensively is pleasing.

swanny8589
6 months
This is brilliant. Probably the best story I’ve read on here tbh. Only think I don’t like is the fact Newcastle are so trash haha
Login to Quote

ScottT
6 months
I love the analysis there. A useful breakdown to help understand your tactic and something that is often overlooked and underappreciated.
Login to Quote

OohAhCantona
6 months
Possession doesn't equal winning! I'm impressed that you still managed to do some much with slight to solid disadvantages in possession. Getting so many shots / shots on target like that is impressive, I usually need 60+% to pour it on my opponents.
Login to Quote

Great month. We have advanced top of our group in the Europa League and undefeated in the League for the month.

Brandon Williams' performances have stunned me. He has been a revaluation. Good to see Garner getting some more game time. Some of the more fringe players like Savic and Tuanzebe getting minutes is also great to see. 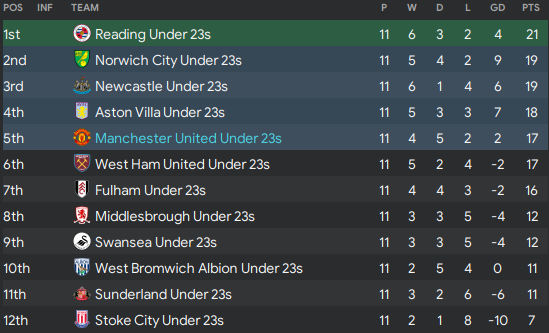 Reserves had a good month, after a shaky last few. Traore, Barlow and Laird are the usual standouts.

Hannibal has been training exceptionally well and is quite easily the best player in the U18 league. Has 35 key passes, 2nd best is 14. 3rd top scorer. In the new year, he will be advancing to the reserves. I can't keep him back any longer. He probably should have started in the reserves.

Value wise, James value continues to drop as his contract continues to run down. Fischer and Anton Miranchuck are looking tasty still. Big month ahead as I look into the transfer market

Youth we have a few fresh faces. Florentino Luis, Senad Bajic, Forent Da Silva join my list of ones to watch. Next month will be decision time on who to pull the trigger on.

Massive month. Chelsea and Man City away, with Liverpool at home. Also got a couple of trickies with Everton away and Leicester at home.

Also a big month for transfers. Looking to bring in a bunch of youth players and a couple of value/bridge players. Time will tell.

swanny8589
6 months
What about having a look at Soumare?

Eoin97
6 months
An incredible analysis all round. Terrific work, it really is. I recommend you add Thomas Partey to your watchlist. He suits the counter attacking style of football that you are currently playing atm, with his vast experience under tactical mastermind Diego Simeone. He has incredible mentals and physicality. Have small look, if he doesn't suit what you ultimately want, that's fine, great work!!!!
Login to Quote

ScottT
6 months
Hopefully a few players can be churned out from the youth squads and developed into great players. James Garner is one particular player to keep an eye on.
Login to Quote