TheLFCFan
1 year
Great to see you back mate. Look forward to following along with Fraser's career and hopefully toppling the Glasgow domination in Scotland. Although the immediate attention will be placed on a promotion for the first time in a good couple of decades. Good luck!
Login to Quote 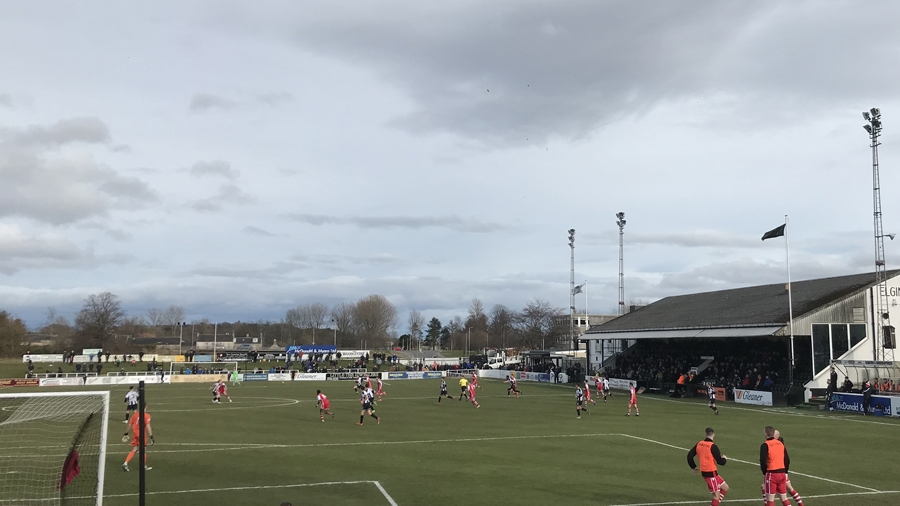 Since my arrival at the club I have worked tirelessly to prepare for the upcoming season. I agreed with the board and directors that it would be in the best interests of everyone that the existing backroom staff under Gavin Price remained in place to ensure there is a level of consistency and not a complete upheaval. I was given permission to add to the staff at the club and throughout our discussions, I have been in contact with numerous people to get a complete backroom team in place prior to pre-season.

Today I can confirm the appointments of Jack Byrne and John Stewart to our scouting team. Jack will be our Chief Scout whilst John will operate underneath working alongside myself to identify potential targets to bring to Borough Briggs - whether that be for the first-team, the U23's or the U18's. Given the club has had to cut back on youth recruitment due to financial limitations - meaning there will be no youth intake for the foreseeable future - it is imperative that we operate effectively in our recruitment across all three squads.

The third and final addition to the backroom staff is the appointment of Colin Shearer as first-team Coach. He will work alongside both Head of Youth Development and Reserves Manager Robbie Hope and Goalkeeping Coach Steven Dunn.

We are also delighted to announce our first, second and third signing ahead of the new season. Myself and the scouting team recognised we had inherited a rather bereft squad with very little depth, in particular on the left of midfield.

Therefore it was key that we operated quickly to ensure we bring in talent and give them plenty of time to integrate alongside the rest of the squad over pre-season and over our campaign in the Betfred League Cup - where we have been drawn alongside St Johnstone, Alloa Athletic, Forfar Athletic and Peterhead.

Having been released from Sky Bet League One side Blackpool over the summer, we are delighted to announce the arrival of Finlay Sinclair-Smith. The Liverpudlian made his senior debut in August 2017 in a 1-1 draw against Wigan Athletic in the EFL Trophy before signing a professional deal in 2018.

The second arrival to Borough Briggs is another left-sided midfielder as Marco Koelewijn joins on a one-year-deal. Born in Airdrie to Dutch parents, Marco is eligible to play for both Scotland and the Netherlands and has been attracting the attention of national scouts for either nation despite having yet to make a senior appearance.

At just sixteen, Marco is hoping to make an impression in League Two and will be competing alongside Sinclair-Smith for the number seven shirt.

Our final addition to the squad at this time is central-midfielder Romário Vieira on a free transfer after the 20-year-old was released by his previous club Leeds United at the end of the 2017/18 season.

Romário joined the youth setup at Leeds alongside his brother Ronaldo, who was already a first-team regular, on a one-year-deal from Tadcaster Albion - a Northern Premier League side - having rejected the opportunity to play his football over in Czech Republic. After impressing in the U23 side, he was named on the substitutes bench for the first time against Hull City and would be named within the substitutes again the following week against Cardiff City.

Following the sacking of head-coach Thomas Christiansen, Romário found his chances limited and was subsequently handed his release that summer. He enjoyed trials with numerous Football League clubs including Doncaster Rovers, Bradford City and Notts County but never agreed terms.

An international for Guinea-Bissau having been capped as a second-half substitute against Burkina Faso in March 2018, we are excited about what Romário will bring to the side, usually operating as a more defensive-minded option in the middle of the park.

All three players will feature in our opening game of pre-season away to Lothian Thistle at Saughton Enclosure on Saturday 6th July.

Justice: Thank you very much

Seb: Cheers mate! Indeed the focus has to be on the immediate future and guiding Elgin out of the depths of the fourth-tier once and for all.
Login to Quote

J_ames
1 year
Hopefully we can get some money into the bank quick smart, so that we can get some form of junior coaching and youth recruitment started at the club! It's imperative for a club like Elgin to have young players coming into the set-up, and it's disappointing to see that it's something that has fallen by the wayside in years gone by.

I really like the look of Romário Vieira, who looks like he'll become a crucial piece to the puzzle. Marco is also quite impressive for his age, but Finlay will have to work pretty hard if he's going to impress me this season.

You've taken the first steps toward success, and I look forward to seeing your next moves.
Login to Quote

Justice
1 year
And in stark contrast to James writing a novel in his comment....

Jack
1 year
Despite being undisputedly outshone by his brother, I could tell Romario and Ronaldo Vieira were both very talented individuals and it's no accident that they both stuck out enough to be picked up by Leeds. A great signing for you there.
Login to Quote Our pre-season preparations were fairly limited as we were only able to book two friendlies ahead of the beginning of our Betfred League Cup opener against Forfar Athletic. We would however book an additional friendly against Brora Rangers of the Highland Football League in-between our opening game and the proceeding clash against Scottish Premiership side St.Johnstone as we sought to prepare ourselves as best as possible for the upcoming Ladbrokes Scottish League Two campaign.

We began pre-season with a victory against Lothian Thistle whereby a poor first-half performance was cancelled out with a much better showing in the final forty-five minutes. Daniel Mackay scored almost immediately from kick-off to present us with the opener before Finlay Sinclair-Smith netted on his debut to hand us a 2-0 win.

This would be followed up in excellent fashion as Craigroyston proved to be no match for us. Brian Cameron opened the scoring before goals from Shane Sutherland, Ross Graham, Daniel Mackay and Marco Koelewijn followed. Ethan Smyth did manage to pull one back prior to Koelewijn scoring the fifth but it was a comfortable evening for us as we were never really tested and forced to come out of first gear by our hosts.

The final pre-season fixture to discuss is another humbling handed out by us via a 7-1 thumping of Brora Rangers. John Pickles initially equalised after half an hour before the floodgates opened and Elgin's superiority began to shine. Both Conor O'Keefe and Kane Hester bagged braces with Daniel Mackay continuing his excellent scoring run alongside Andy McDonald and Archie Macphee.

We also used this time to strengthen the squad(s) further as we made further additions with the signings of four fresh faces. The first of these additions was the arrival of Armstrong Oko-Flex on a season-long-loan. The deal came able following a deal being struck between Elgin City and Celtic to become affiliates to one-another. Oko-Flex arrives at Borough Briggs without a single penny being spent towards his wages which will be entirely covered by the Scottish champions.

The seventeen-year-old Irishman has yet to make a senior appearance for his parent side following a switch to Celtic Park last summer from Arsenal where Oko-Flex was also unable to find his way into the first-team fold.

Jordan McLaughlin arrives at Borough Briggs on a free transfer having yet to have signed a professional deal prior to signing on the dotted line for us. Jordan is a young right-back at aged sixteen with plenty of scope for improvement but with an abundance of potential waiting to be unlocked. Jordan will be looking to compete in the senior side this season.

Another sixteen-year-old joining the club is David Eadie who will be closely monitored in the U18's by Reserves Coach Craigh Stewart in the next twelve to eighteen months.The left-back has signed a deal that will keep him at the club until May 2023.

Elgin's fourth and final signing to discuss is the arrival of target-man Stewart Cooney. The 6'1" Arbroath-born striker will be joining the U23 side for the forthcoming season whereby he will receive plenty of game-time to further his skill-set rather than competing alongside more established stars at the club such as Shane Sutherland, Kane Hester and Russell Dingwall.

James: I wholeheartedly agree and it is very disappointing that the youth recruitment and junior coaching has had to be neglected in this way. Improving the financial situation at the club will be one of the key missions for Fraser.

Glad to see you're pleased with the signings of Vieira and Koelewijn. I'm sure Sinclair-Smith will make it his mission to prove you wrong!

Jack: I was very surprised when he accepted our offer. I seriously think he's much better than the fourth tier of Scottish football but I'm not complaining whilst he is contracted to Elgin City.
Login to Quote

J_ames
1 year
Some solid pre-season results, and the squad can go into their opening game knowing that they're more than capable of finding the back of the net. Armstrong looks like he could play a big role for the club on the right this season, with him screaming out 'assists' at first glance. The other lads are very young, so expectations are quite low, but I look forward to seeing their development over the course of the season.

Best of luck against Forfar Athletic

Jack
1 year
Those hammerings handed out to Craigroyston and Brora is one way of raising morale for that cup tie! Oko-Flex always seems to be a name that I associate with good talent in whichever lower tiers you choose and with that on-the-ball ability as well as his crossing it would be hard to say otherwise. All the best in the cup!
Login to Quote

James: Most definitely. Regardless of the opposition, scoring plenty of goals and playing well is always a massive confidence booster for any team. I have high hopes for Armstrong. He has good competition in Daniel Mackay and having such quality to compete alongside should only help everyone get the best out of each other's games.

Jack: He definitely looks a coup on paper. I'm hopeful that his ability will translate onto the pitch. Much appreciated!
Login to Quote

Jack
1 year
A strong pool of players going into the new season. Sutherland looks fantastic and hopefully he can win points on his own - just depressing that he's leaving at the end of the year!
Login to Quote

Justice
1 year
Very cunning. Do you shop at House of Fraser?
Login to Quote

TheLFCFan
1 year
A good pre-season with some massive results there. The real early test of this team will be the Cup though and I am excited to see how Fraser's side goes. The squad is exciting, with an abundance of young talent throughout. I am particularly excited about Marco, Oko-Flex and Jordan McLaughlin, all who I think could have big seasons this year.

J_ames
1 year
Some really impressive players on your books. I particularly like the look of Ross Graham and Brian Cameron, along with the players that have been mentioned before [Vieira and Armstrong]. The next year will be spent finding a replacement for Sutherland, as every other striker you have atm is pretty awful in all honesty. It's going to be tough to attract anyone decent unfortunately. The return of Gunn maybe!?
Login to Quote