Honestly, I didn't expect this... because... I started this FM21 after 8 years of not playing any game.. and this was the first time playing FM again, so was out of expectations at all! Have picked Real Sociedad because they are very nice club with nice players such as Isak, Oyarsabal, Merino, Silva... Actually D. Silva was my favourite from FM 2009.. I remember Valencia CF in that time with Villa, Vicente, Silva, Mata, Albelda... so I wanted to play again with Mata and Silva, and I bought Juan Mata for R. Sociedad, it was amazing buy!! He had most assists and 10 goals. Let me show you my story: 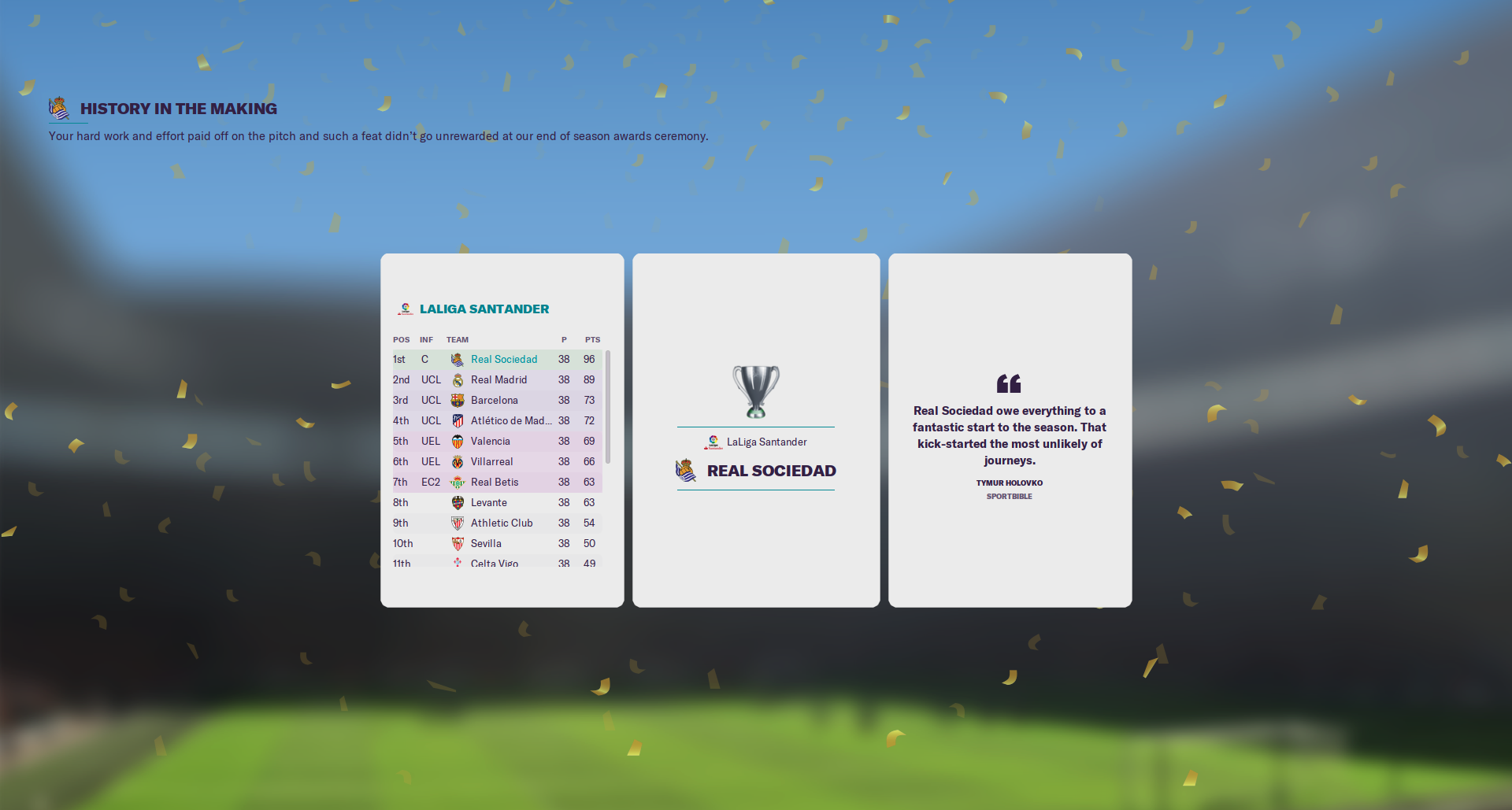 Amazing season, looking forward to building an amazing team but hey, I have it right now no need to bring anyone else to the team?!

Here are new arrivals of the first season, excluding D Silva, C Fernandez.. they were part of the team already! So I bought Robben just for fun.. . he is too old! Francisco Trincao was on loan, to help from the bench... and the best signing was JUAN MATA! Oh, Lord... he was just fantastic!!! 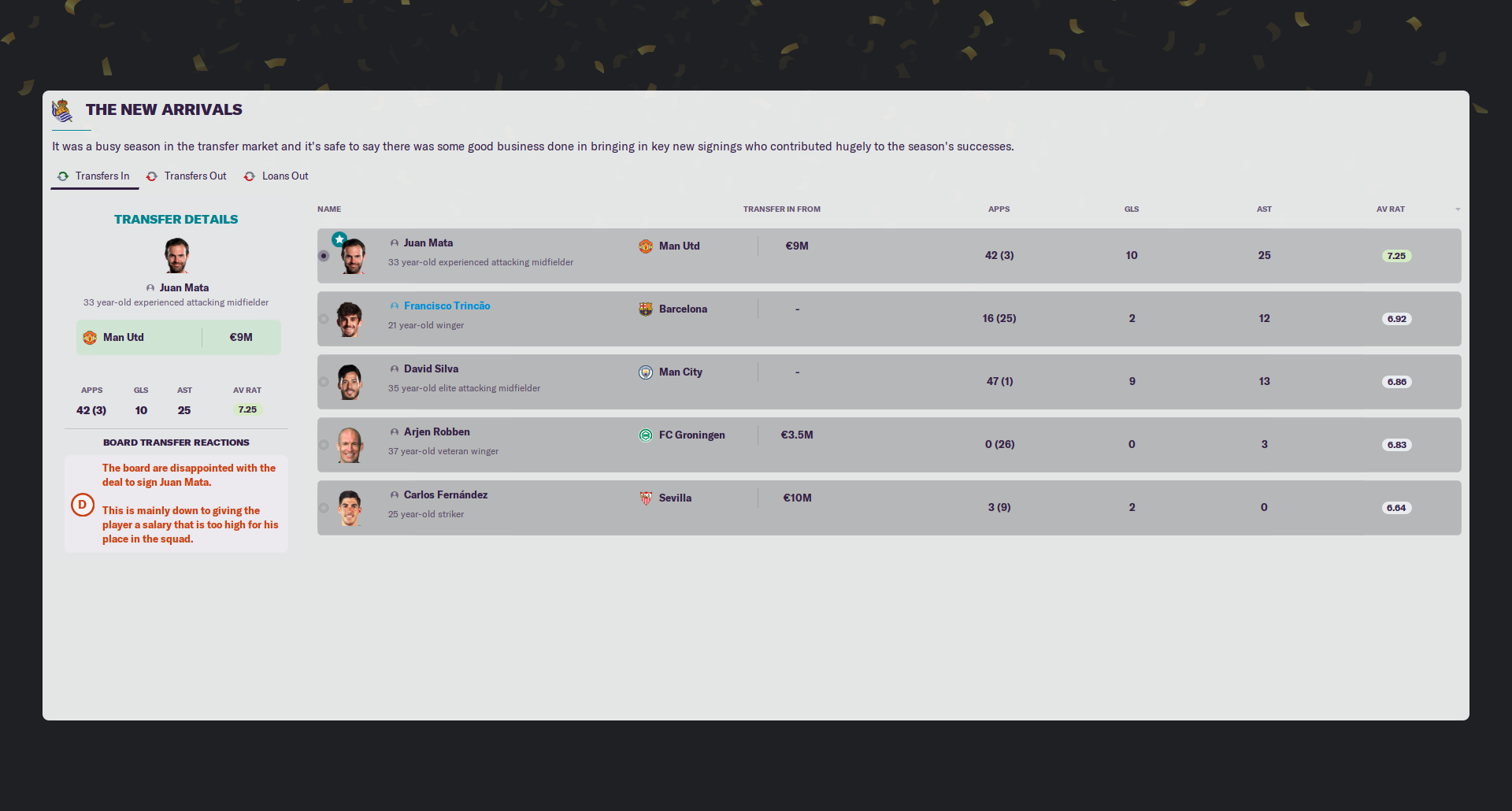 And this is the final standing of the LaLiga first season! 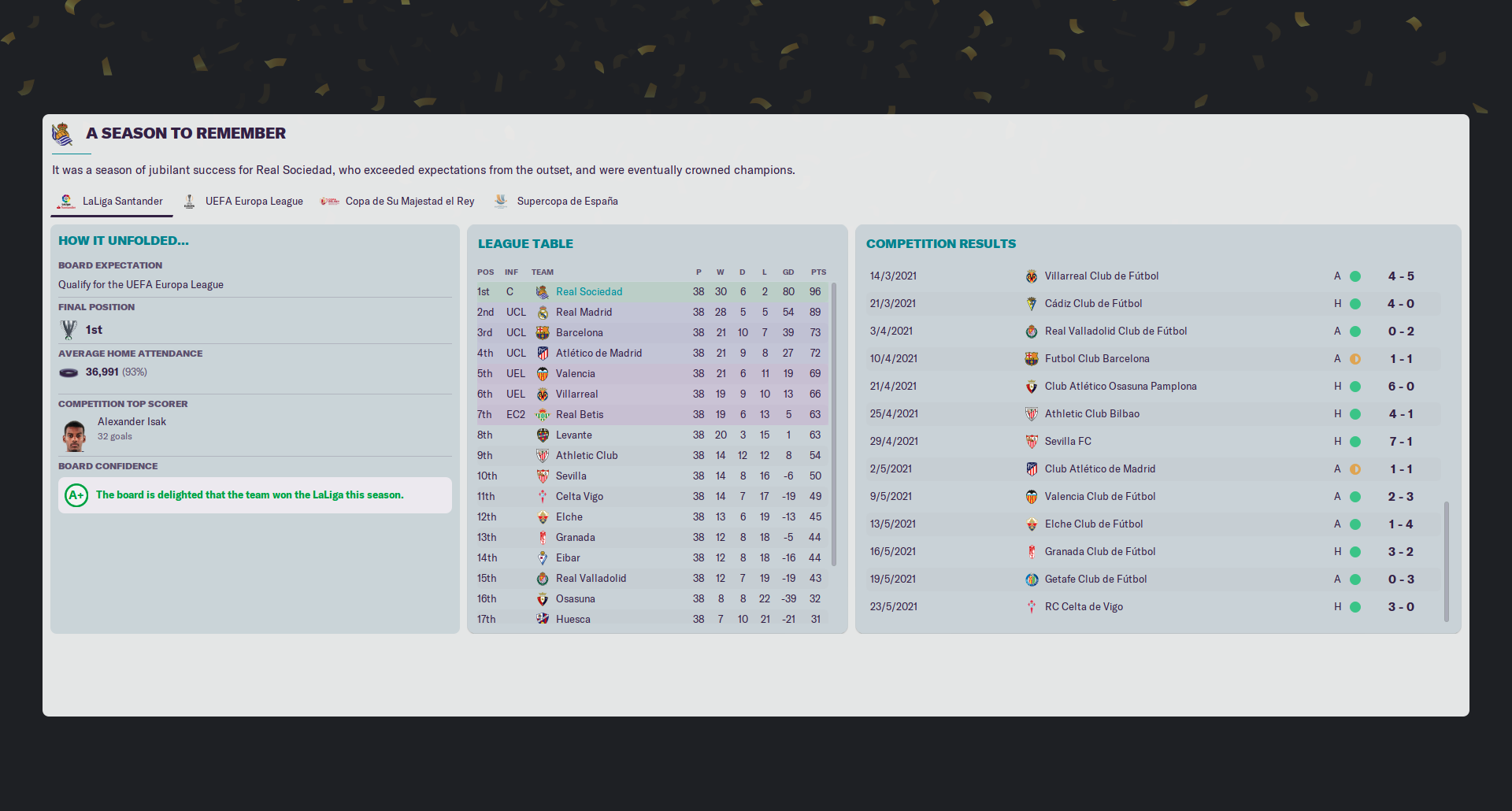 I will share also Copa del Rey, reached the finals against Real Madrid, but lost in an interesting match (3-2). 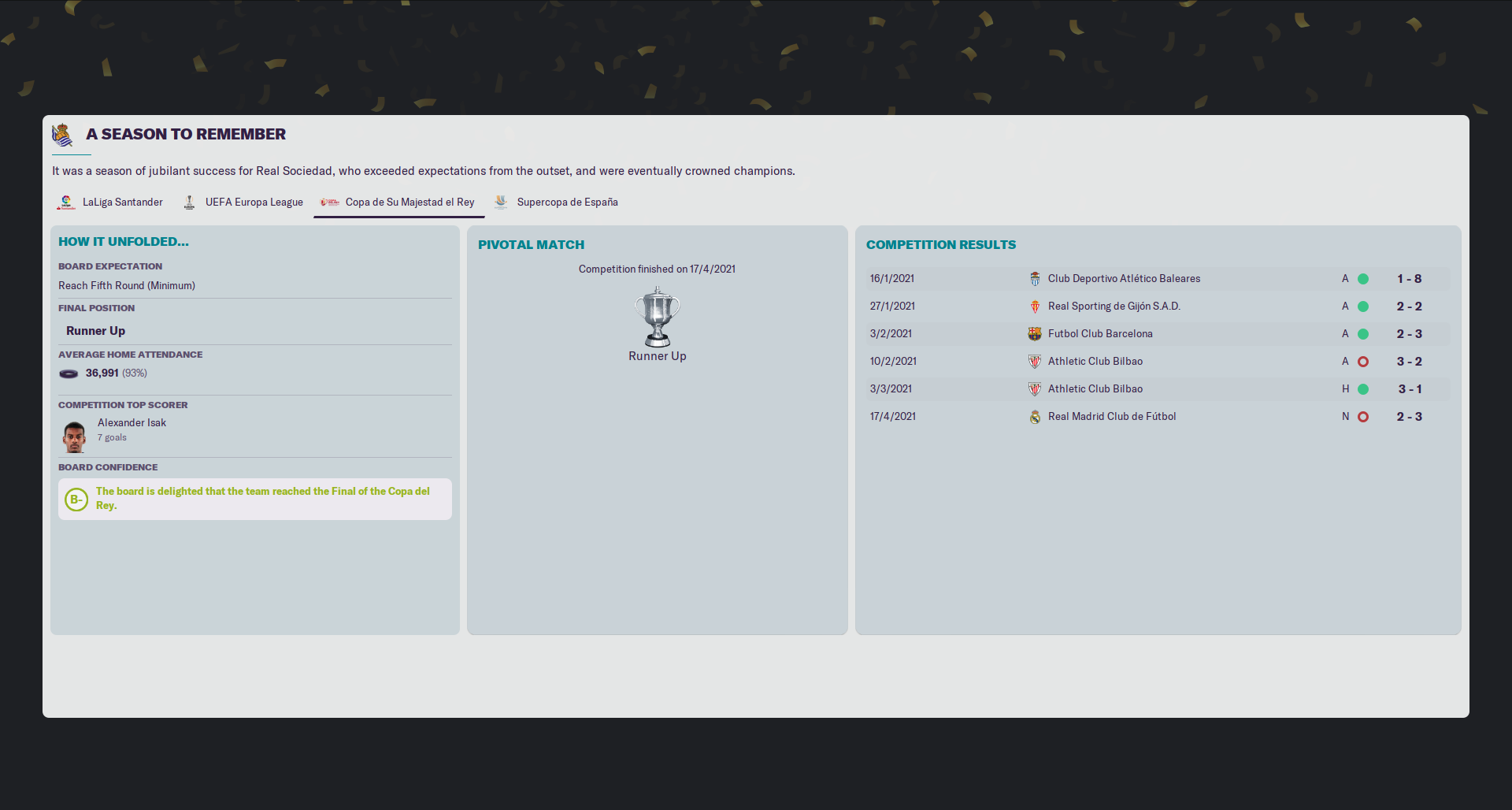 This is the best team that played all season long, almost all Spanish! Juan Mata the only new player to the team. Foreigners Isak & Le Normand. 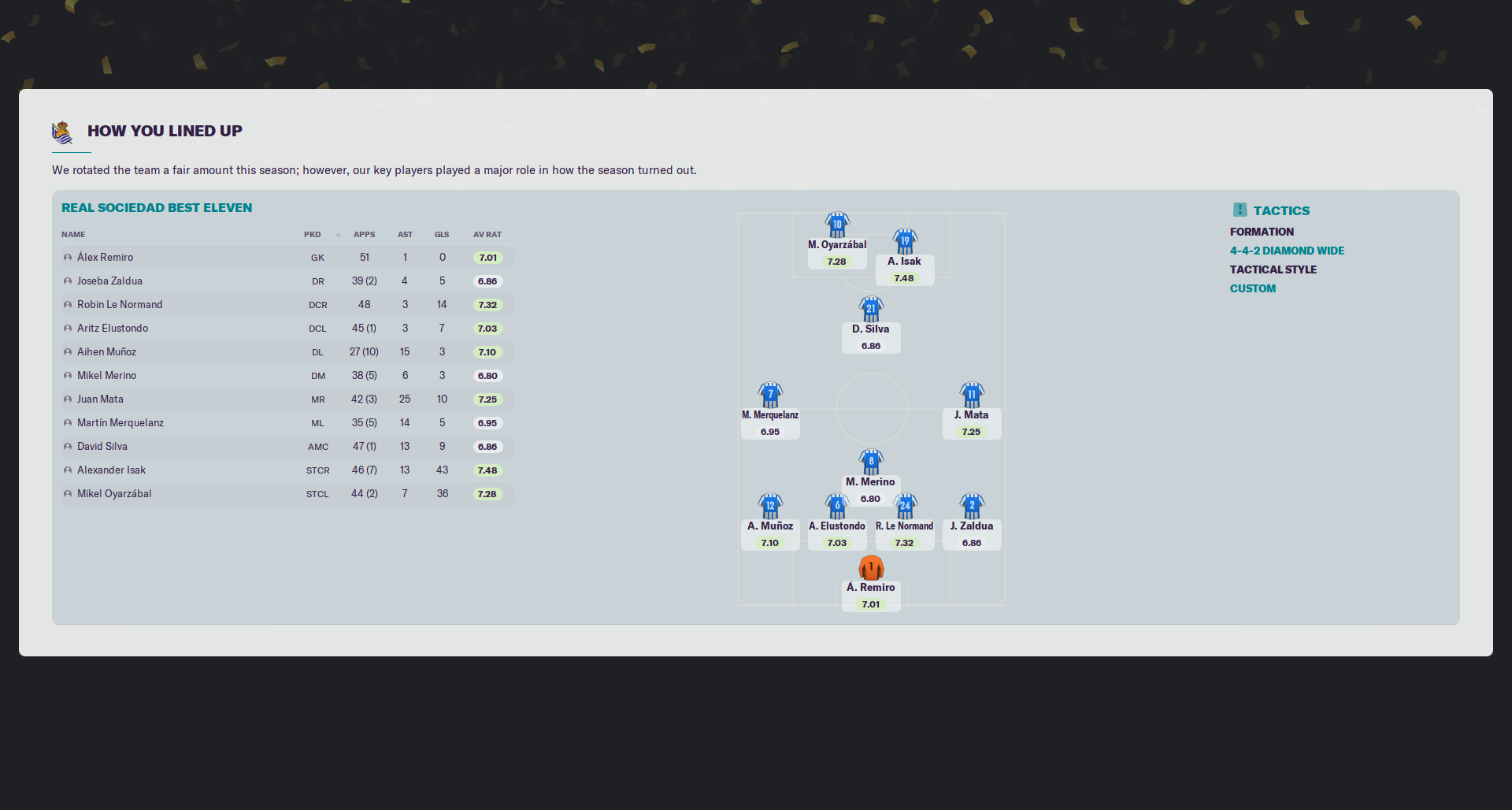 The most goal scorer... Alexander Isak! Juan Mata the most assists. I must say that Oyarsabal was just fantastic also, with a bunch of goals, 2nd goal scorer. 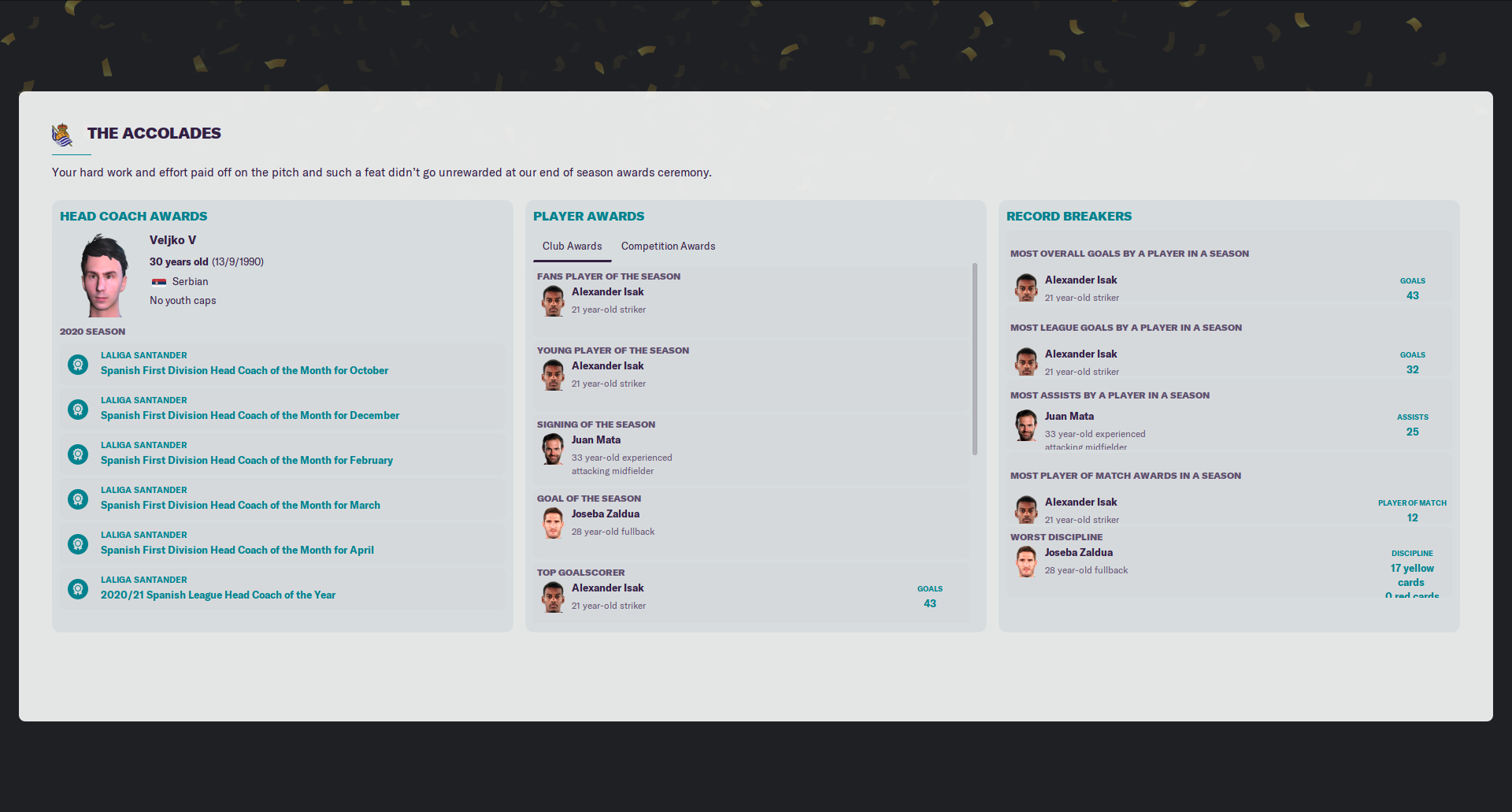 And some moments from the season... 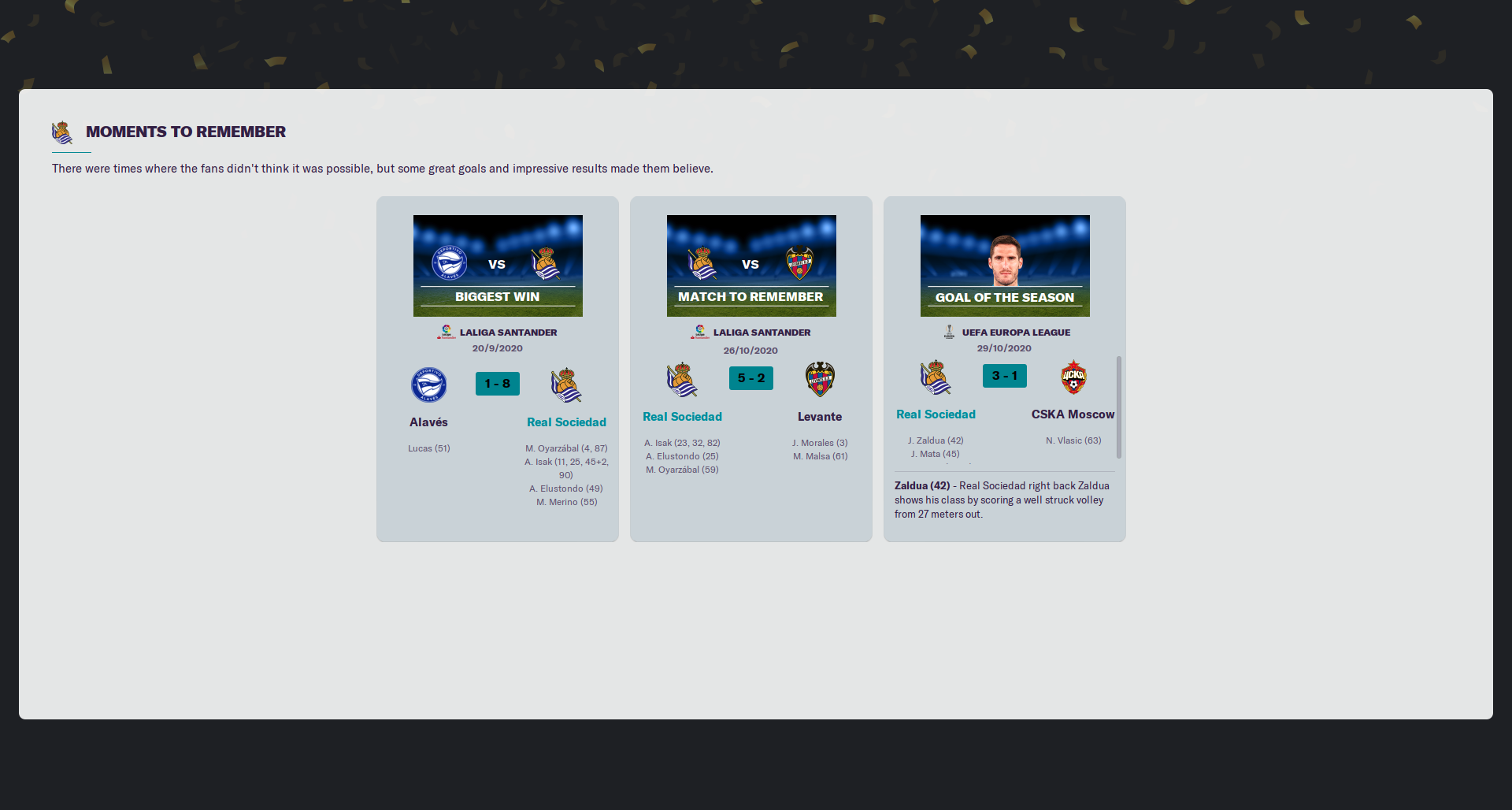 The best XI of LaLiga 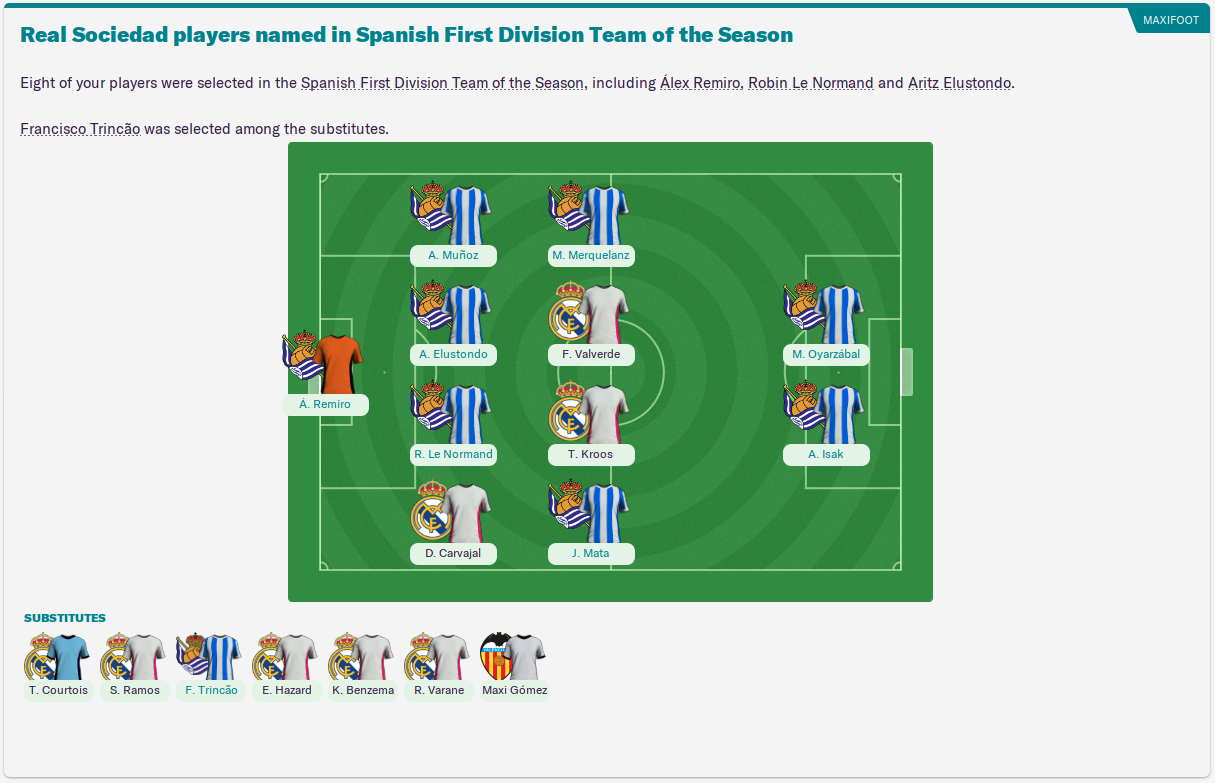 Finances, squad and tactics... I must say that I used Bossanova V3 tactic from this site. Thanks to author!! 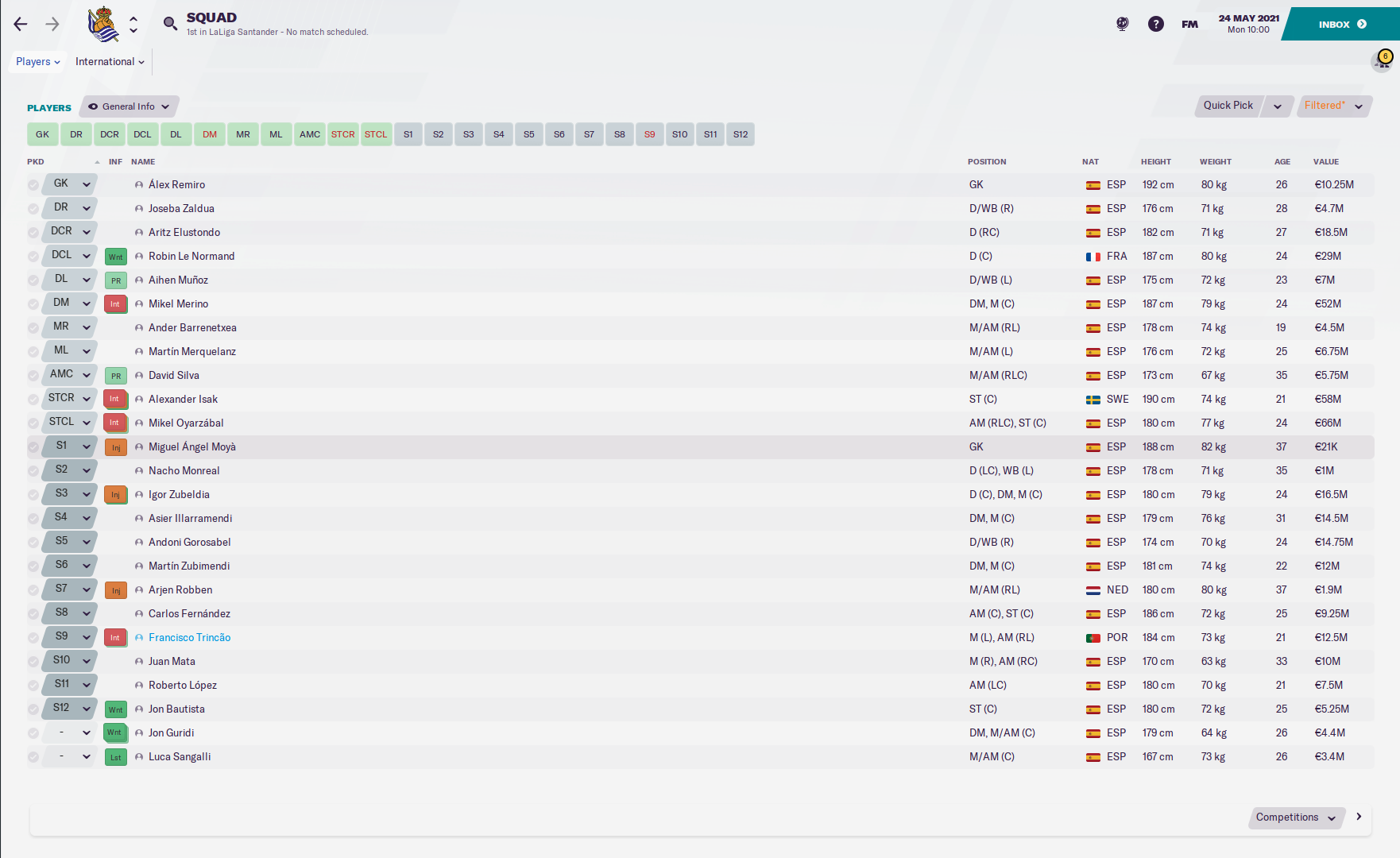 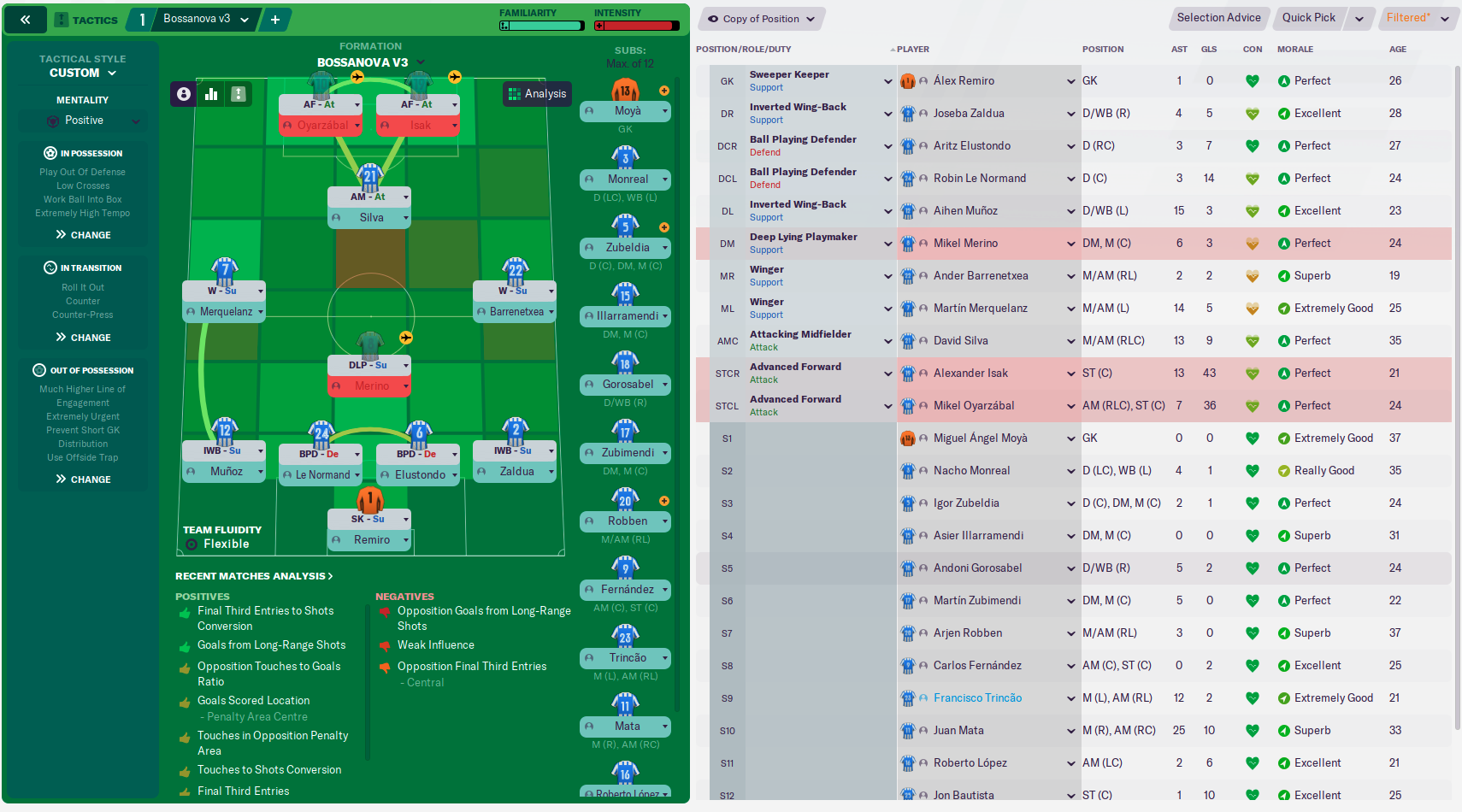 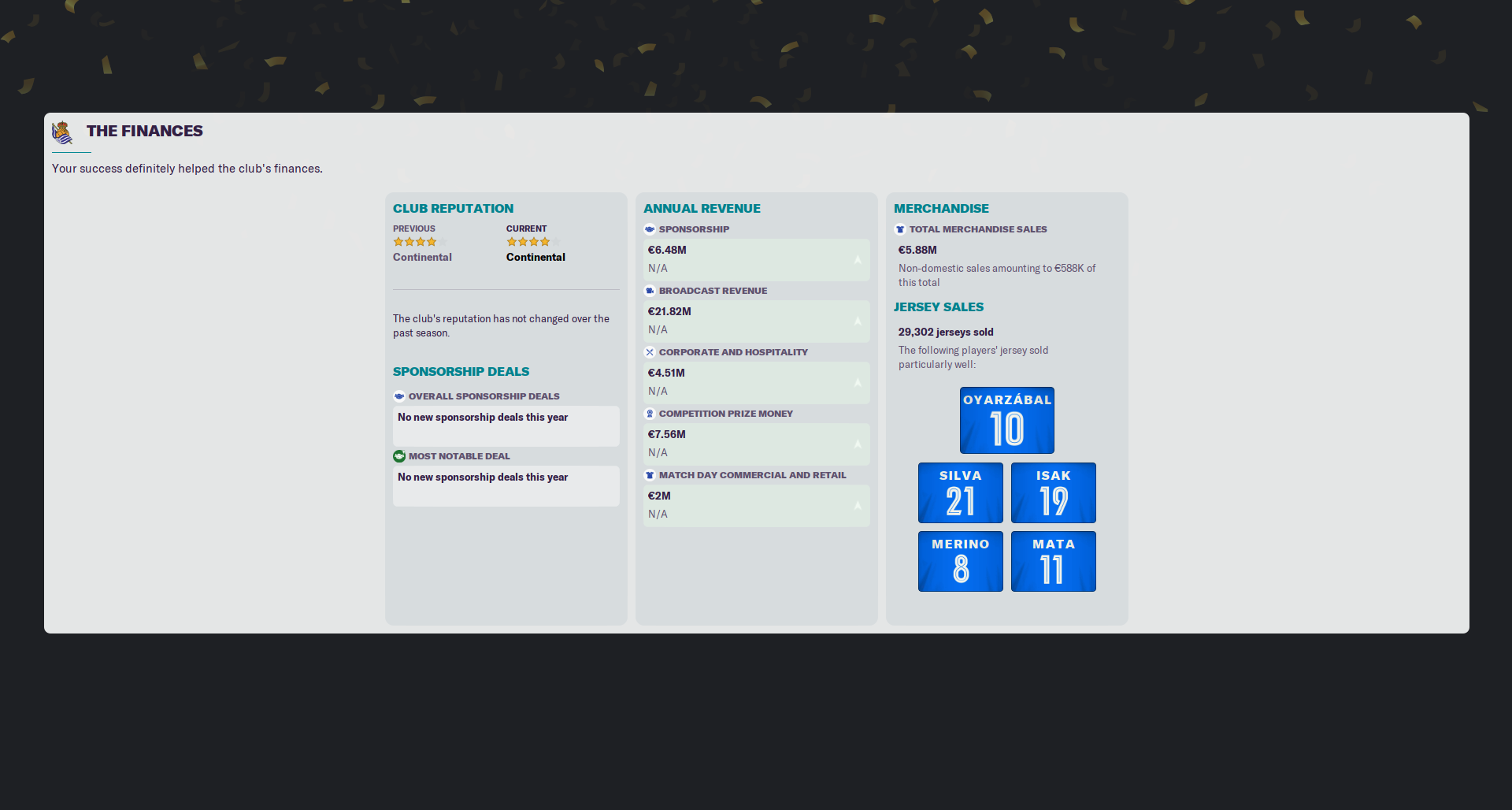 This is the staff behind Real Sociedad, bought some coaches, physios...

The best players, look at these attributes and ages. A mix of young and experienced.
Defender Le Normand scored 14 goals. Merino is a new Xavi. Silva and Mata were assistants. Isak and Oyarsabal goal machines.

Planning to sell A. Robben and other players who were sitting on the bench, and to try to sign Javi Ontiveros... should be a perfect fit for the team.

I always tend to buy players with nation the same as club. I like to work that way but yes sometimes I must buy some foreign player, but looking at the previous season it worked!

There are some youngsters in the team like A Barrenetxea, Robert Navarro... they for sure will be a part of the team for the new season.

Looking forward attacking the Champions League in the new season. 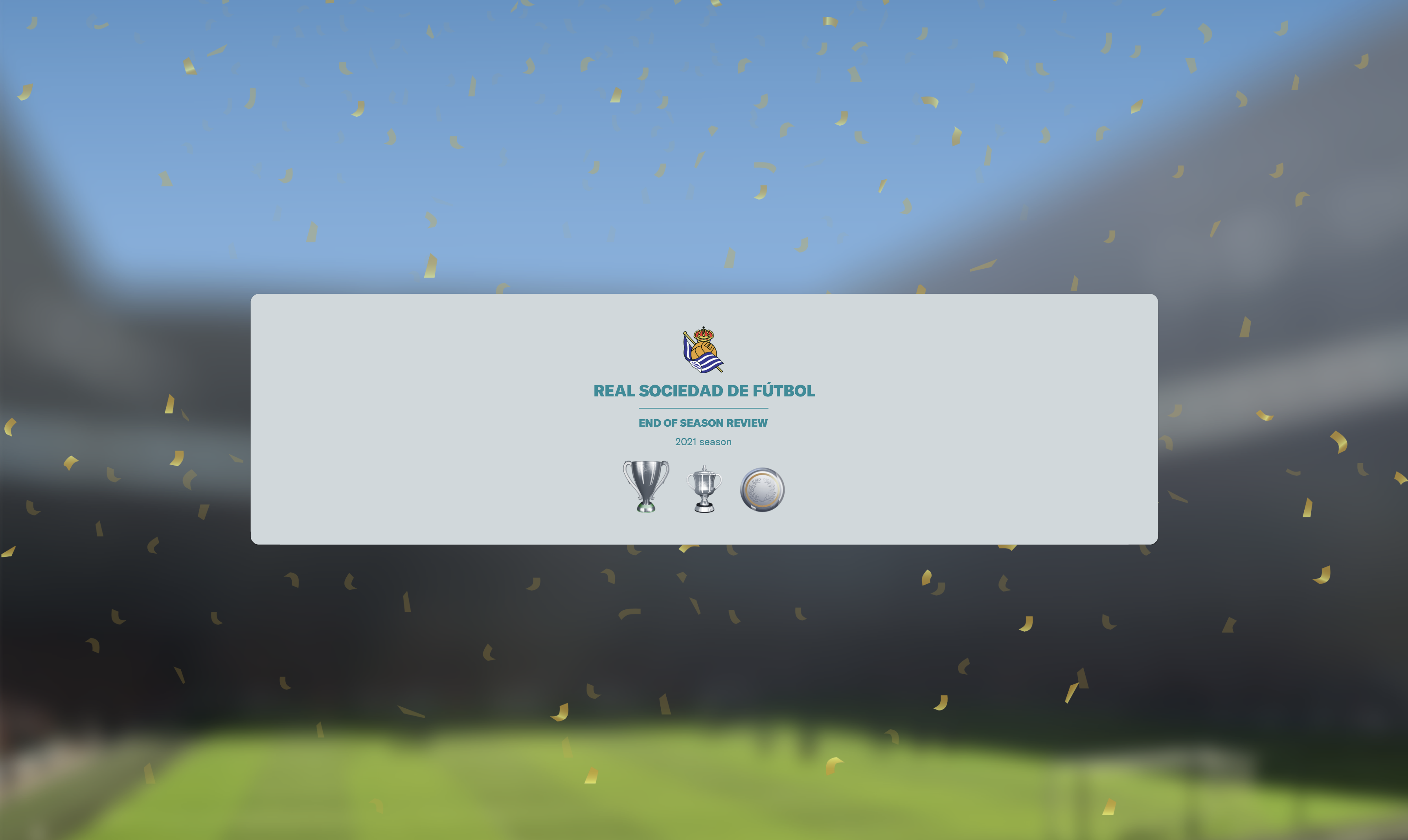 Yes, I bought Javi Ontiveros and he was amazing. This is the best 11 played all season long. 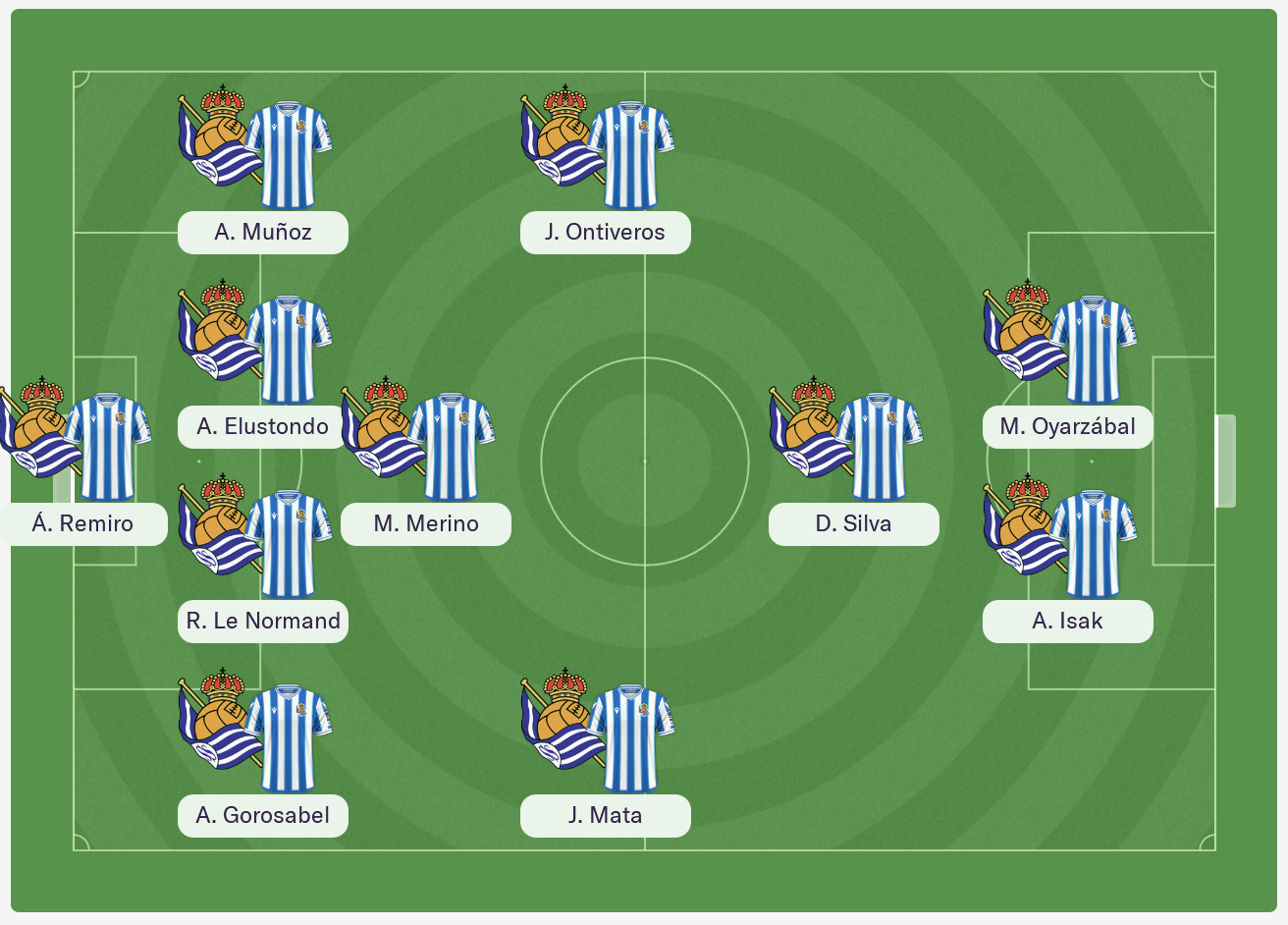 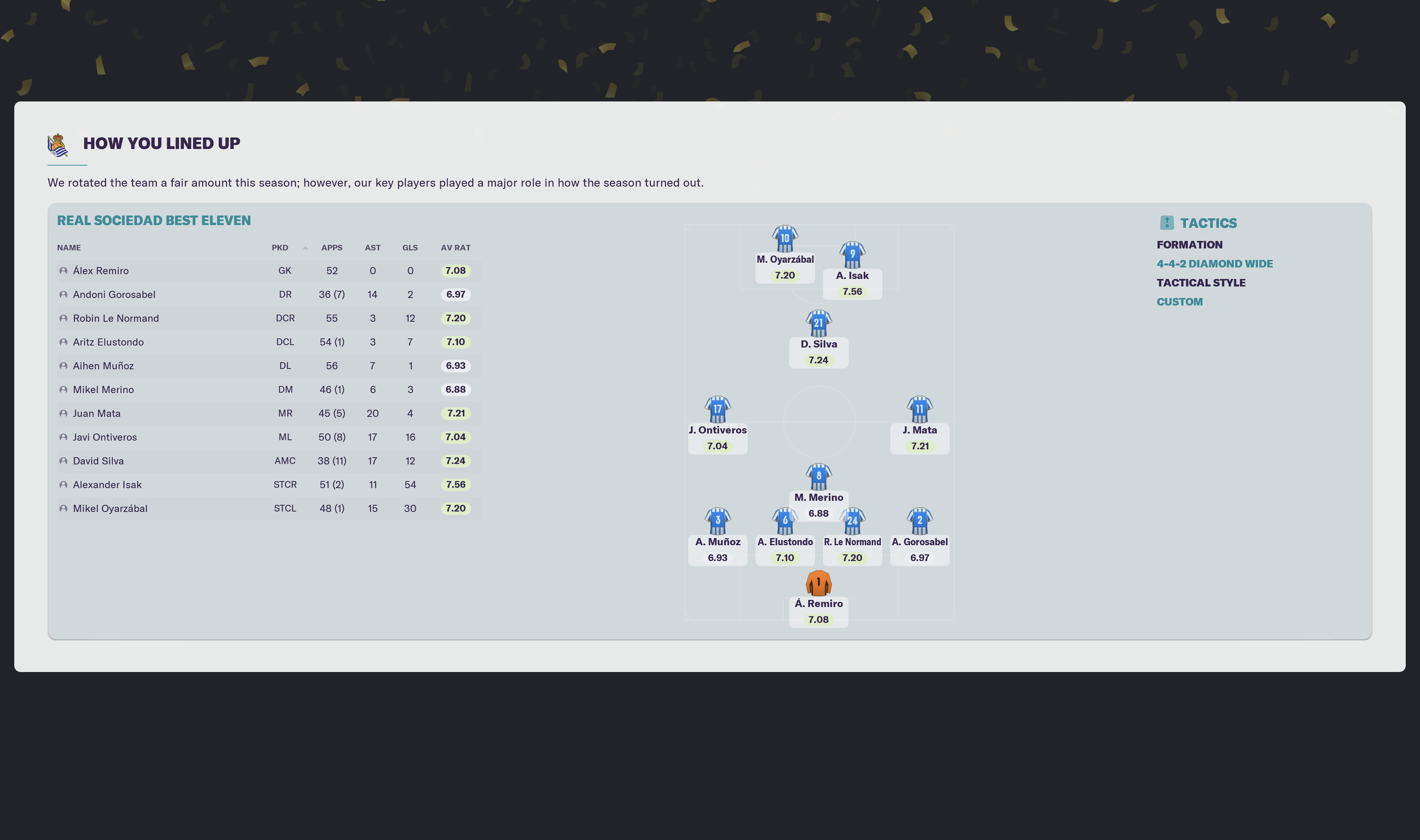 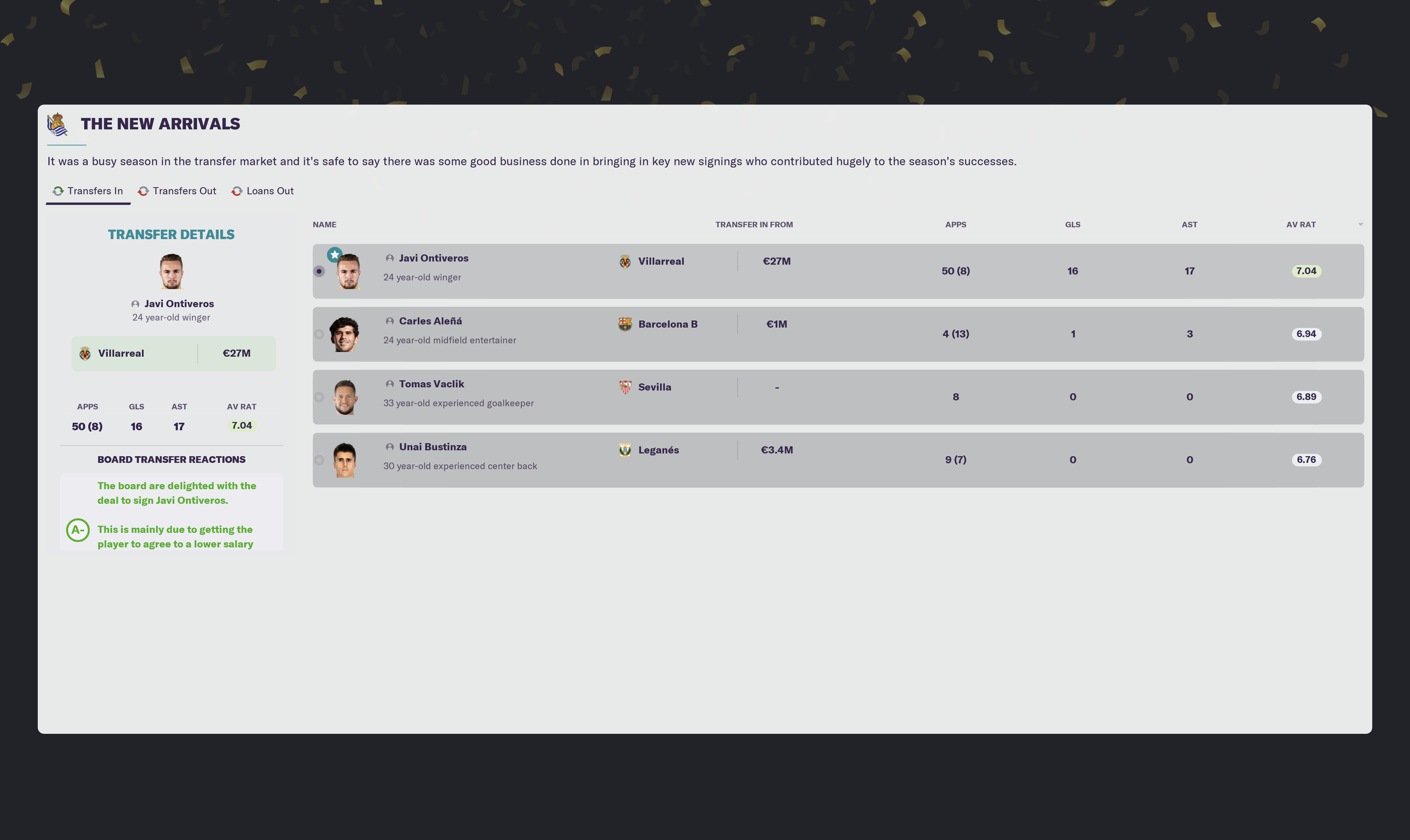 This is the standing of LaLiga, more points this time comparing the last season. 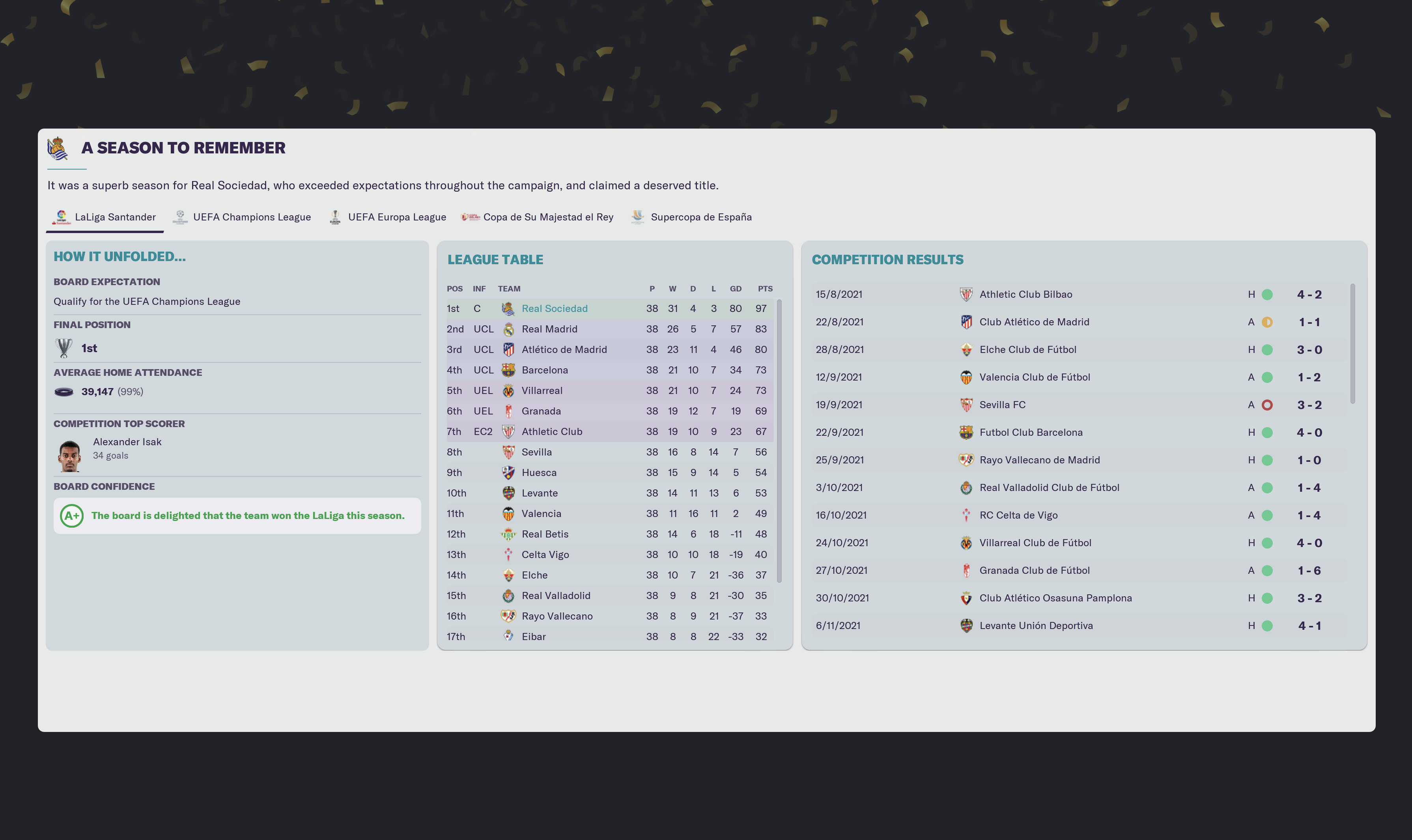 Alexander Isak was just fantastic!! Scored above 50 goals! He is like a new Anatoli Todorov (for those who know who that was) 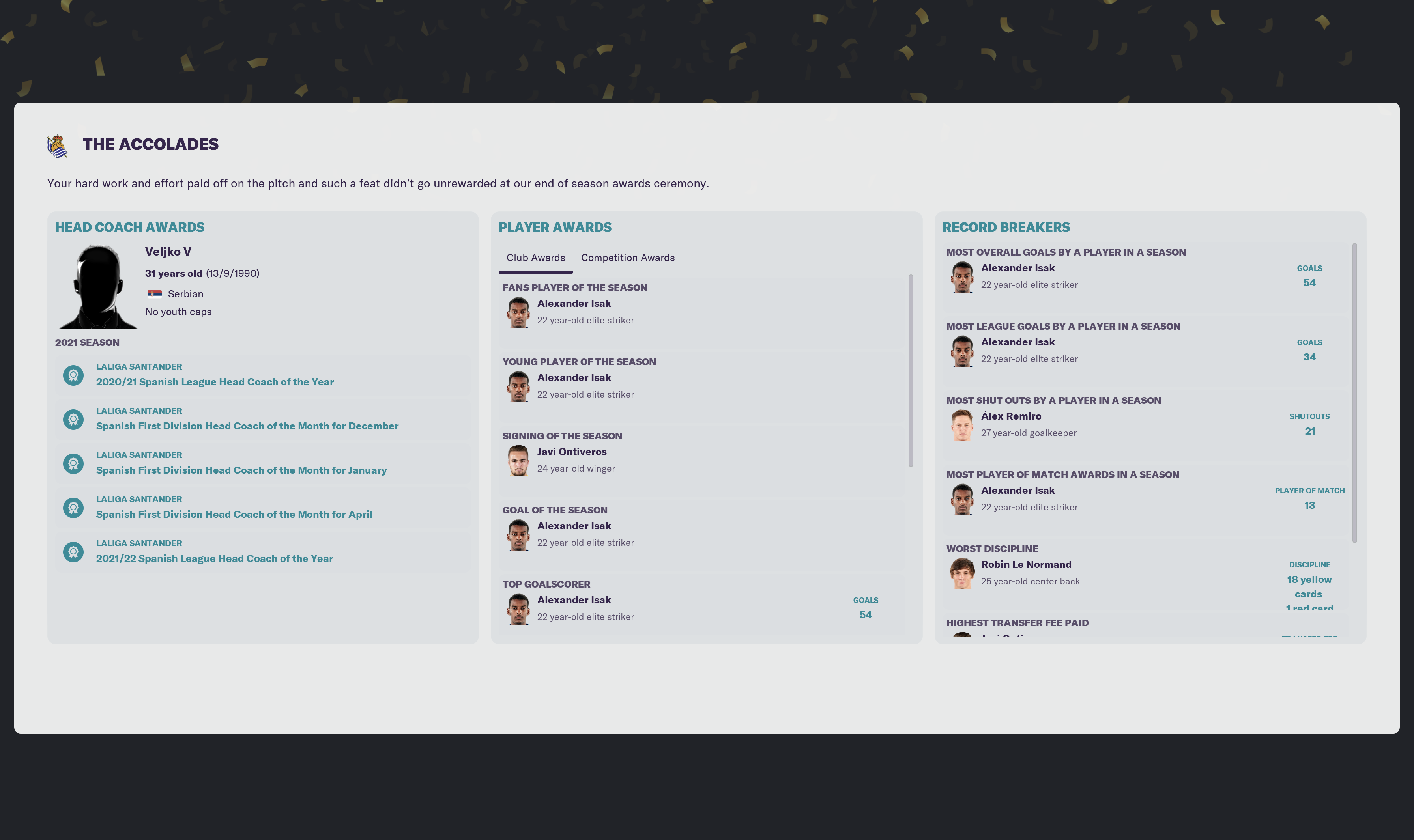 I forgot to mention that I was bad at Champions League, finishing the 3rd place in a group.. then in Europa League reached the semi finals, lost against Arsenal in a hard game.

Next steps to take in a new season:

I would like to buy (and I bought already) Thiago Almada, young prospect or a wonderkid from Argentina? I bought him for nearly $10M and he is now estimated in my team for $37.5M, which is great.

Sadly, I need to shake hands with David Silva, he is now too old but was superb! I want to make things more interesting, he didn't want to extend the contract.. I have also Juan Mata who is also older, 34 years atm... but he will be in the squad as a backup.

For the new season, I bought Carles Alena from Barca B, Patric from Lazio (free transfer) and there is Willian Jose who was on loan and now is back in the team. I have still to spend since I have a lot of money in the budget, around $53M. But want to be smart in buying and to continue the club's tradition of buying Spanish and Basque players. I forgot to mention that I sold Zubimendi to Valencia for $24M, Carlos Fernandez to Betis for $15M... they were unhappy with the time spent on the pitch.

Got Otavio and Lodi on loan. Otavio should replace Mata, and Lodi to help from the bench.

This is the current squad and not planning to change anything, will go for another LaLiga title. 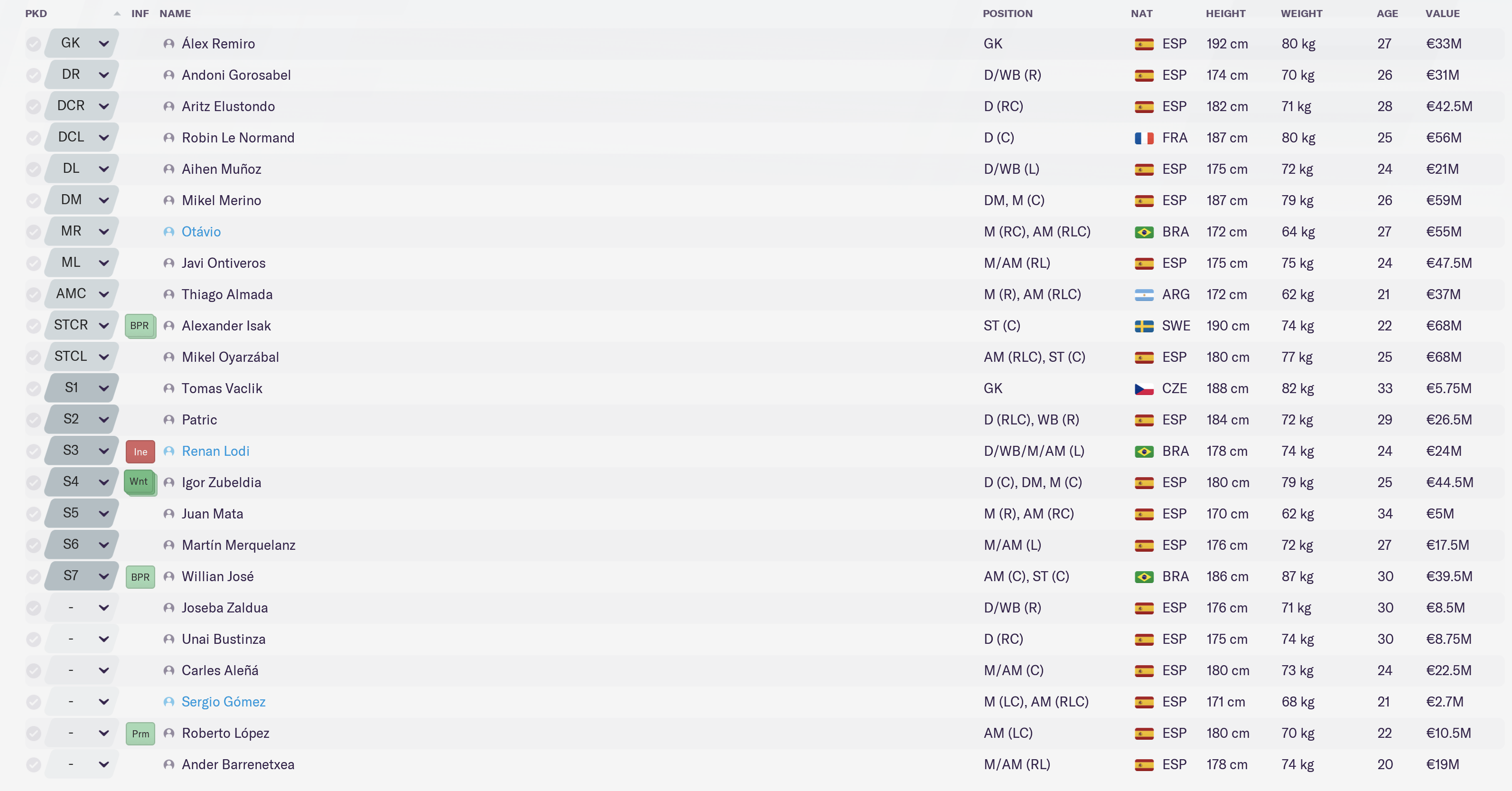 Alexander Isak is a new Messi! Scored 62 goals this third season! A beast! His awards below: 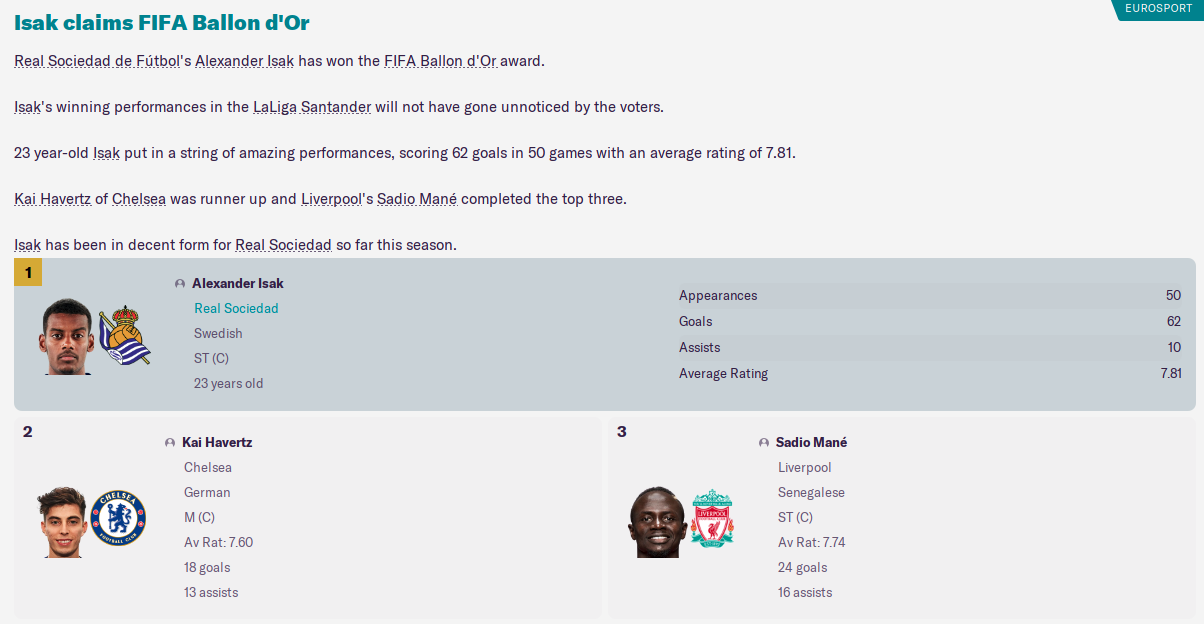 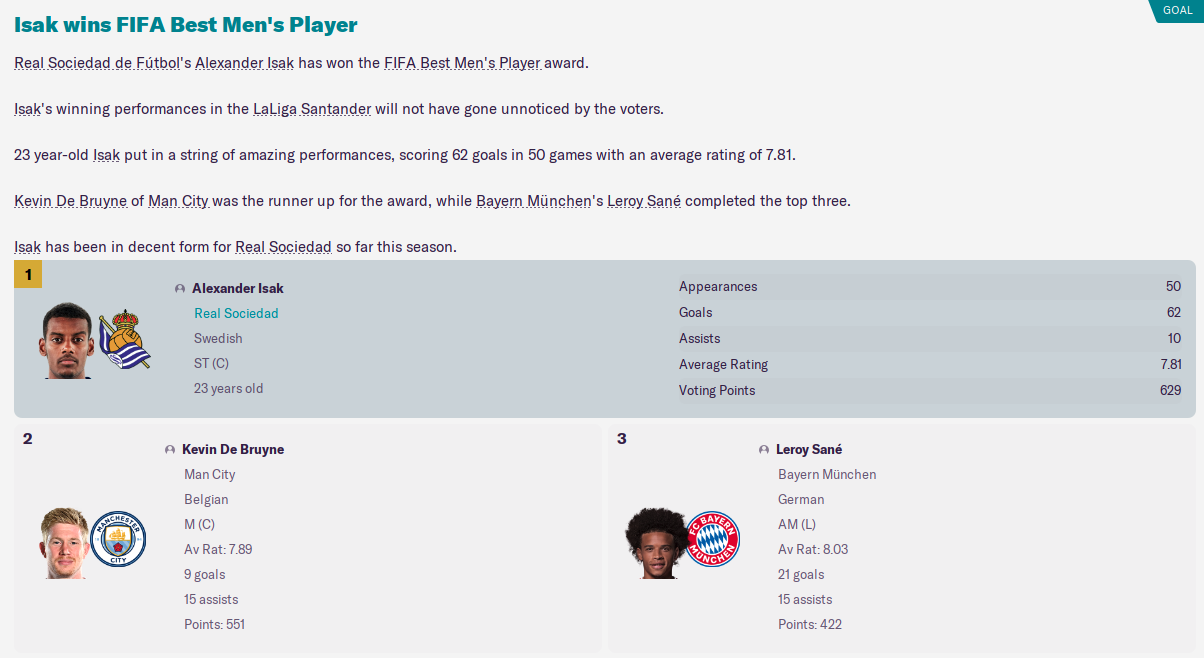 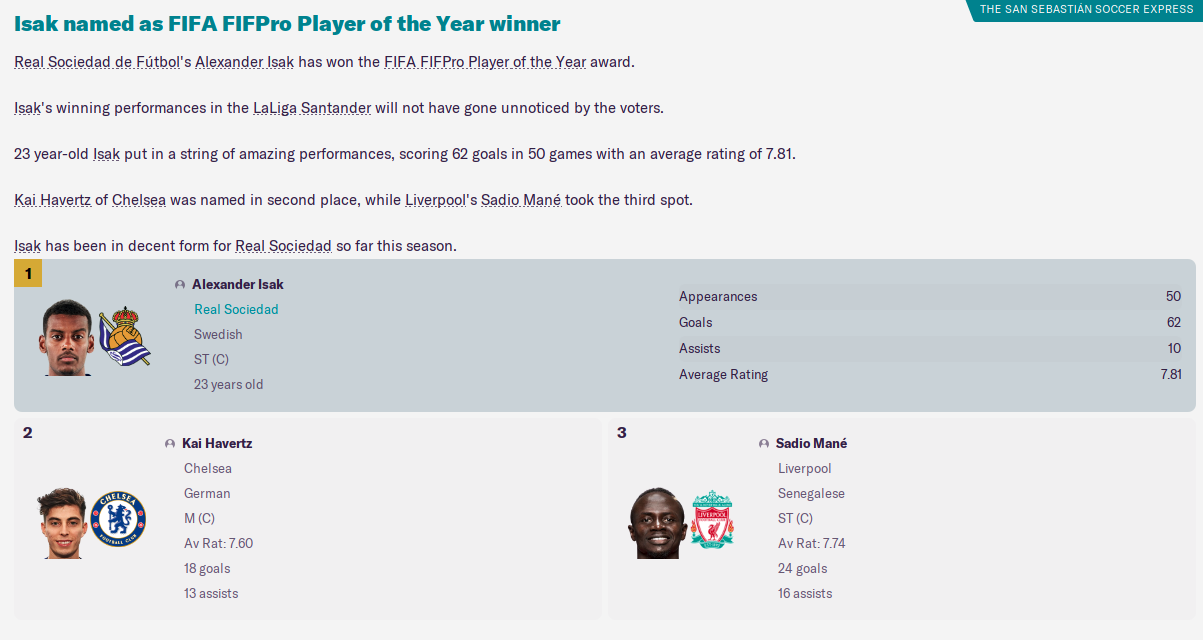 Luckily, he wants to stay at Real Sociedad CF, yay!

Unfortunately, this season Mikel Oyarzabal, a captain, wanted to go for a new challenge. He decided to go to Chelsea for a $108M... 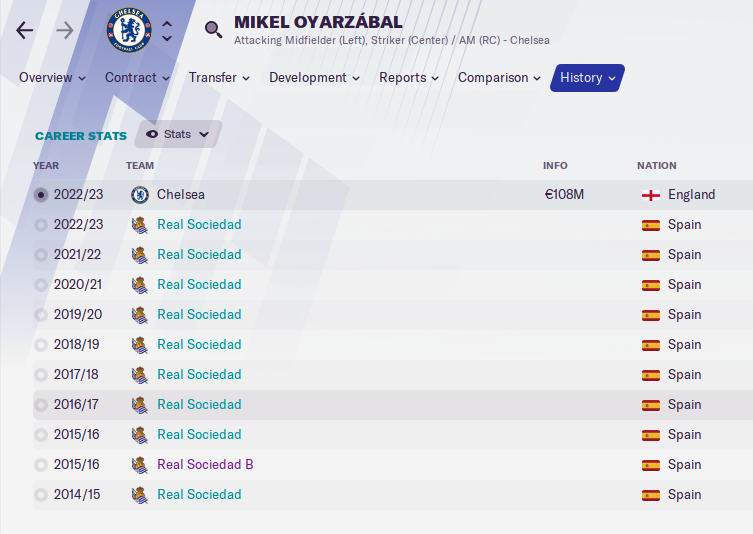 I'm not happy about it, but I decided to let him go and also decided to reform the team.

So I bought Asensio!!

And looking forward to buying Evanilson from Porto FC!

In the meantime I sold also Zubimendi, Zubeldia.. they were unhappy to be in the substitute.. replaced them with some Spanish players, loans and small transfers stuff.

These are the best XI of the third season. 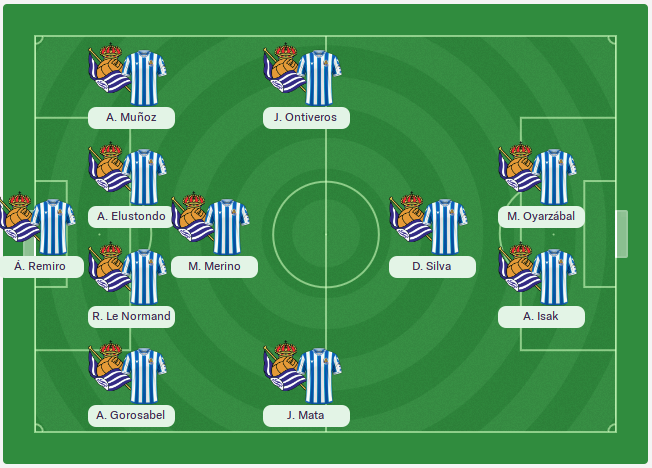 I bought this wonderkid from Newells OB:

Best moments of the 3rd season:


Looking forward to defending the title and try to be better in the Champions League, until they bring that Superleague to the place.. I don't like it, hehe.
2

AlexSonwild
1 year
Fantastic stuff lad, what a season! I'm a big David Silva fan myself and might fancy a go with Real Sociedad on FM21 as well. Actually, I had a great season with them back on FM12 which was my first FM game! I remember bringing Jon Bautista in the first team back then when he was like 17, how's he performed for you?

Keep us updated on how next season goes with the title defence and Champions League!
Login to Quote

2021-04-14 22:39#283187 AlexSonwild : Fantastic stuff lad, what a season! I'm a big David Silva fan myself and might fancy a go with Real Sociedad on FM21 as well. Actually, I had a great season with them back on FM12 which was my first FM game! I remember bringing Jon Bautista in the first team back then when he was like 17, how's he performed for you?

Keep us updated on how next season goes with the title defence and Champions League!

I forgot to mention that I updated the staff roster... bringing some good coaches, physios, fitness coaches.. even assistant manager. Maybe that also helped winning the title! I'll update the post with the staff team.

Jon Bautista scored nearly 10 goals, he was very good but played mostly from the bench. So I will keep him playing in the second half and sometimes giving him the whole match (when resting Oyarsabal, Isak..injuries..).

What I like to do is to make things more interesting like selling the best players to gigants like Real, Barca.. players such as Isak or Oyarsabal for huge money... changing the team, even when everything's good and in place, just for fun.

I also forgot to mention that Le Normand, a french defender in the team, scored almost 15 goals by his big head!

veljkho
1 year
There was an update on this post! The second season has ended. Please scroll the post if you already have seen the first season.
Login to Quote

veljkho
1 year
I updated the post with my 3rd season stats! Again won LaLiga, seems like Real Sociedad is the best club in Spain in my virtual world.. hehe. No more Barca, Real or Atletico... now's the time for SOCIEDAD! VIVA!