Winning the league and cup is a simple task with Sheriff and should be won year in year out, however, I want to build the league around me and help my foes out. My short term goals are to build a Moldovan core to my team and use foreign players to strength the areas were I struggle to find talent. Once this is well underway, I will then look to sell and loan players to rest of my division to try and make more than one team competitive in Europe. Long term, I want to dominate Europe with a Moldovan core to my team

I will be using this more as an update site and hopefully can have you onboard for the journey with me. Our league campaign starts in March, so the plan is to complete a big chunk of the season in the first updates then, it will be monthly until our departure from European competitions. If we do get knocked out early, I will finish the season in the next update.
1

The league registrations rules are strict in this league you must have the following in your squad;
With these squad rules I knew I'd have to promote youth early so the below 4 players were moved straight into the main squad. The potential is there for these players to offer something to the team straight away.

We also made the signing of 2 new Moldovan players to start to bolster our Moldovan core.

With all this include, this is the squad we will be starting the season with and hopefully European qualification is on the cards. 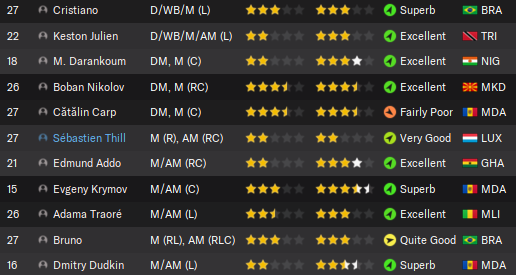 @Gagagagica - Thank you for your comment. I'll be needing the good luck!
Login to Quote

So our campaign started with a game in the Moldovan Super Cup following us winning the league in the previous season. We met Petrocub in this game, who I saw as a rival in the league as they maybe one of the only teams to cause is an issue in our game. A simple 2-1 win saw us lift our first piece of silverware under my management. The first of many I hope. 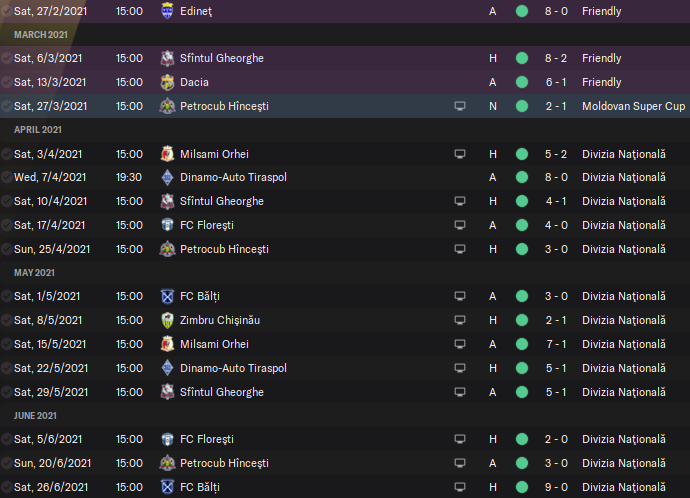 Following this our league campaign so far has been somewhat simple, scoring goals is easy for this group of lads and young Oprea is making a name for himself in the league. Hattricks are a standard in games for this boy. Lets hope a bigger team in Europe don't come looking at him, as he will be influence for us. Although Oprea is making noise in the league, the other youngsters and established player are sure helping him do this.

Next up sees us take on Bodo/Glimt in the Champions League First Qualifying round. All games in this competition will be tough for us for a few season until we can sign some established players. If we do lose this tie we do get a second attempt at qualification for Europe, in the form of Conference League qualification.

NTBgaming
4 months
Nice Idea for a save, i always love the Idea of building a nation, so i'm interested to see how you'll do!
Login to Quote

All eyes were now focused on the Champions League qualification. First up we travel to Norway, in which I believed was a winnable tie. We went out with the same tactic and the same squad, we held possession well during the game and had the better chances. Unfortunately, we went behind first and could only force a draw. Disappointing result and the boys knew this.

The home leg of this tie should have been straight forward, no injuries in the squad meant we could field another strong side, however, hours before kick off our starting left back Cristiano left the club. A transfer was confirmed meaning he would be joining OH Leuven for 200k, this was an offer I couldn't refuse for a player who is replaceable.

An early goal was the only part of the game which we showed any fight or character, from this point we were on the back foot. Bodo/Glimt were the better team across the tie and were deserved winners. The boys knew they had a second chance at European qualification with a tie against Prishtina of Kosovo.

First up we would play our home tie, and what a tie this was, the boys clicked from the first kick of the ball and the result just shows this. A record win for Sheriff capped of this performance

With the tie being dead and buried, a few of the younger boys got a run out in this leg. The boys showed they are ready to fight for their places in the team. A late Pristhtina goal did spoil the aggregate result as this wasn't deserved.

Progress is on the cards in the Conference League with a tie against Neftci of Azerbaijan in the third round. This tie is packed in a busy August.


@NTBgaming - Thank you! Season 1 has been so capturing for me and can't wait to get further in.

J_ames
4 months
This was a save that I looked at doing, albeit with a different Moldovan club, so I'm pleased to see that someone has attempted it. I ended up electing to do my 'Build a Nation' in Malta, which is a much different climate to Moldova! It'll be a very interesting journey [and difficult!] but with the resources/infrastructure that you've got at Sheriff: that'll be extremely beneficial.


First up this August we travelled to Azerbaijan, we took control of the game early doors with 2 quick goals, Neftci pulled one back just before the half drew to a close, however, the rest of game was just ultimate control from us. Yet we couldn't hit the back of net. Although the second half didn't go our way, we do take a 1 goal lead back to Moldova

The return leg was a carbon copy of the first half of the first leg, we took control early on in the half with 3 goals scored going into half time. But yet again a goal before the close of the half pulled Neftci back into the tie. The away team came out for the second half fired up for the game more than us, a few changes from us to freshen the team up cam back to bite us. 2 goals in the second half gave Neftci a draw in the tie, however we were strong enough to hold out and qualify for the next round. A tie with Shamrock Rovers awaited us in the next round.

Again, we made the trip away for the first leg. What can only be described as total domination from us happened for 90 minutes with and early goal giving us the upper hand. In the dying minutes of the game we lost control and collapsed. A weak challenge in the 90th minute gave a penalty to the hosts to bring the game back to 1-1. With the last kick of the game the host took the victory and the upper hand in the second leg.

Following the first leg, I knew we were the better team on the pitch and like the first game we controlled the game. A simple but effective game plan gave us a 3-0 win on the day and qualification to the Conference League.

A group draw of Roma, Vittesse and Omonoia puts us in the toughest group on paper. Hopefully we can win a few games to put our foot in the door of European football.

This month has been tough with travels across Europe and a total of 9 games, however, we do still hold 100% record in our domestic campaign.


@J_ames - I did plan on doing a different club, however, the club ratings are so poor and knocking Sheriff of the top spot is a task in itself. That's why I plan to buy and loan players to help clubs out in the league. Malta sounds difficult, good luck with your challenge
Login to Quote

You are reading "A New Sheriff In Town: Building a Nation".