PJGrieve7
10 years
Okay this s a story i am looking to be a long term game unless otherwise ie( National job, GB,Olympics etc). I have been giving no transfer budget but i have got rid of a couple of players, transfer update in next update.

So. . This is my Everton Story which was me getting inspired in djwatto's Everton story. They have a good squad with experienced players and players for the future.

I hope to get them back into European football. They have been in the UEFA Cup but i hope to get them into the Europa League or maybe even better the Champions League. In a couple of years time i hope to be title contenders with Sir Alex, Arsene Wenger, Harry Redknapp will retire sooner than later. But they will still be a threat.

I have set a target of a top half finish. I want European football though. I just went for a top half finish as it was not making a difference to my transfer budget as i got no money at all.

So that is my intro.. I am welcoming your all your criticism and please all your tips and suggestion. Thanks.
Login to Quote

PJGrieve7
10 years • Edited
I have decided to just update every five games
So here is how my Pre-Season went... 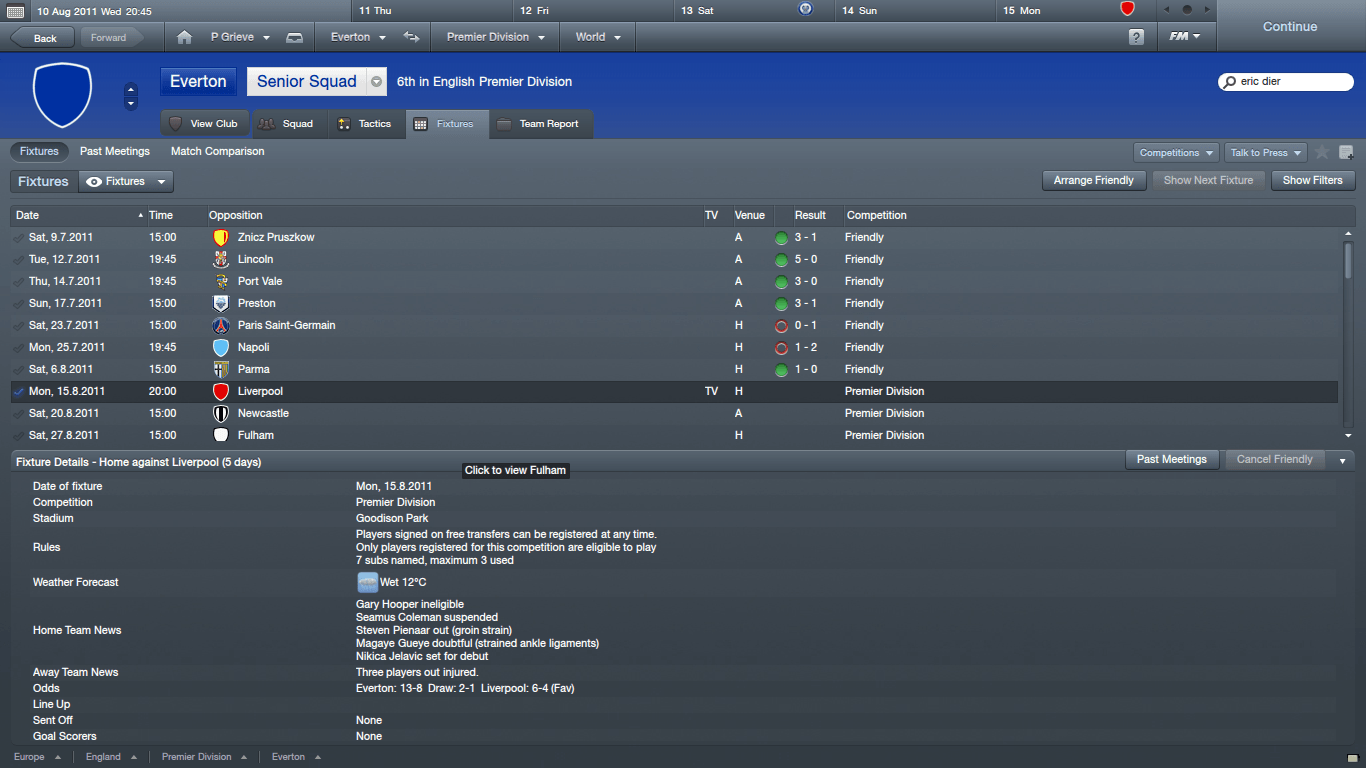 
In this update i had five league games and one cup game. My cup game was HERRIFOC!

An overall update for this update is i have taken 13 points from a possible 15 points. This is a great start of the season. I couldn't off asked for more. This leaves me joint top of the league with Manchester City.


Well now the transfer window is closed here is my activity in the window. 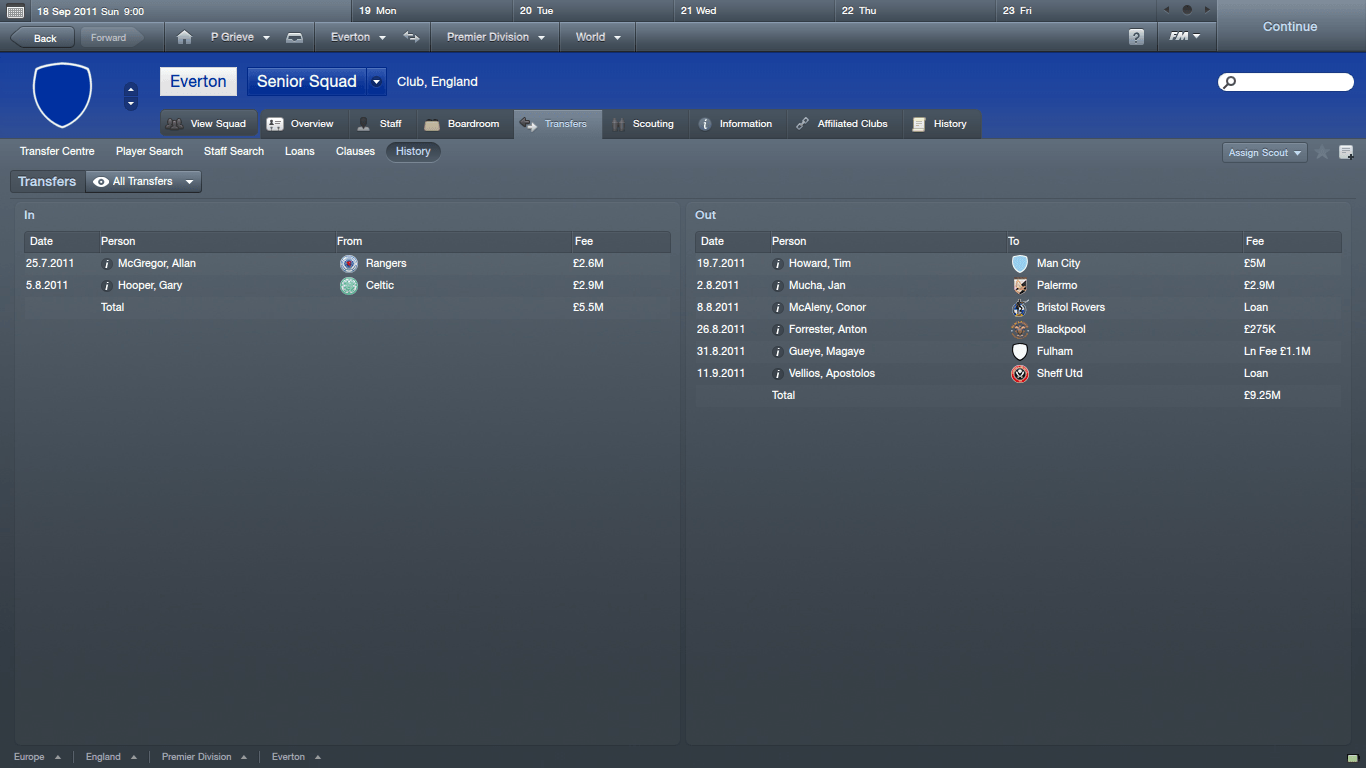 
So after a good start i was hoping for the form to continue... TBC

So i have remained unbeaten for 5 games going into my home game against Stoke. But i have went four games on the trot without winning. I held a team meeting though just to keep morale high and that worked so i think they are fired-up for next couple of games. I am pleased with the start of Alan Mcgregor who has had alot of outstanding games fot the club. I am still lying in a good league position.
Login to Quote

newcastleguy
10 years
Hi m8
See you Everton like me like I say try for Griffiths cheap and good look forward to next update from you.
Login to Quote

PJGrieve7
10 years
i know but i stand by my decision, i only sold him because he wasnt getting any younger and could have done with the money, but i do regret signing hooper, well a little:P
Login to Quote

PJGrieve7
10 years
Okay then i just noticed this, what a result lol. 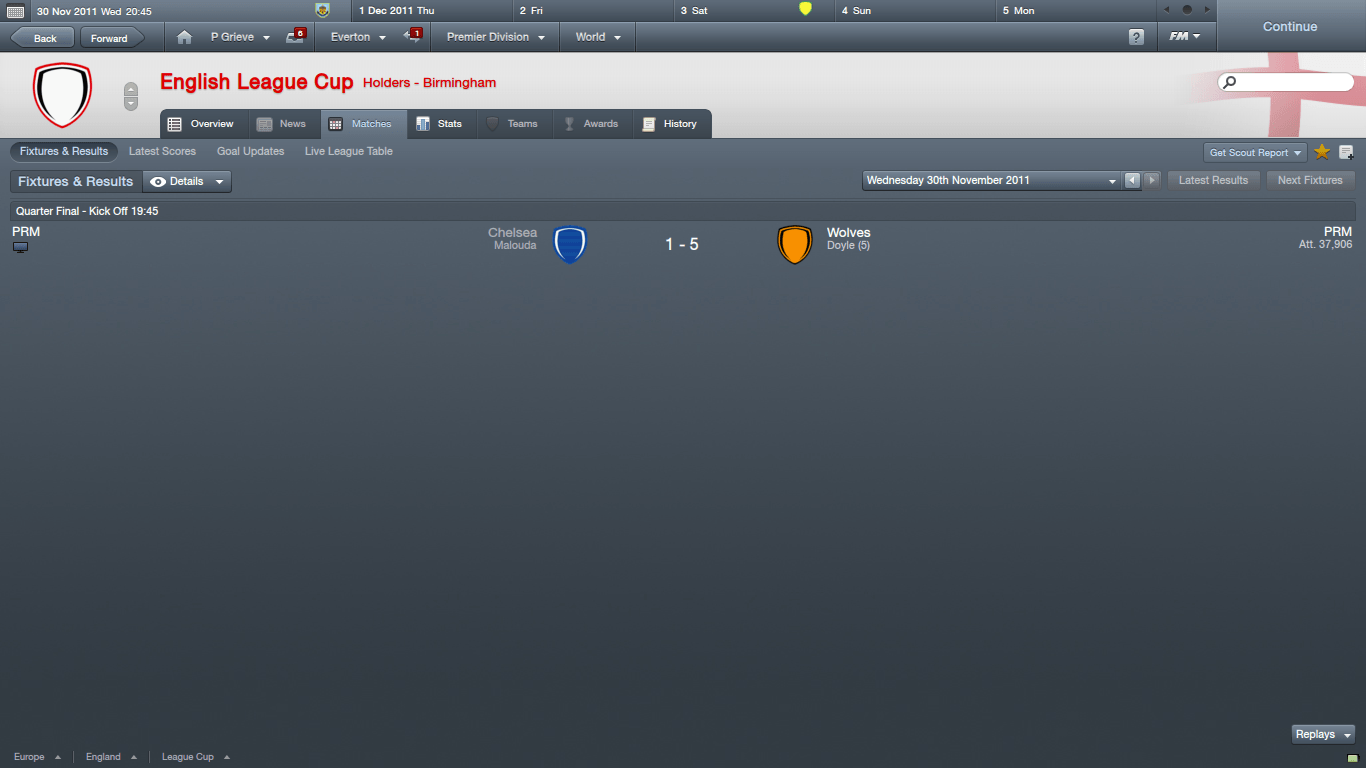 welshwiz1972
10 years
That's what we like to see, Chelski getting stuffed although why is there only one Wolves goalscorer listed?
Login to Quote

Ory1997
10 years
Dude by Lorenzo Crisetig, Rafael Toloi Albin Ekdal and Sarabia. Quick before the are bought!They are not expensive, Crisetig can be bought for 850 K and becomes a world class. If you don't belive me check him out in my "Future England and Manchester United Stars".
1
Login to Quote


Okay then so mixed results getting me eight points. Two games that i could do nothing about but maybe a little more effrot would have been nice. The nowwich game was unlucky but still should have been won. The Chelsea game was a good result but we hit the post and bar twice each. I thought we could have got more in the swansea game but we still won. After the Man U game and Spurs game morale is low. I have Liverpool after my next game against WBA i hope for a win again against my Meryside Derby!
Login to Quote

jamstoe
10 years
Great story mate! Doing an Everton one too. Try and play Jack Rodwell as a CM deep-lying playmaker as he creates and scores loads of goals!
Login to Quote

You are reading "Can we do Europe? Everton Story".