chrisyboy23
8 years • Edited
NOTE: This is my first post, so have patience! But please post any suggestions, improvements etc. but only constructive criticism! Thanks

“I am delighted to have been hired here, it is a dream come true; every since I left here after playing, I have wanted to return as a manager. It is a huge job, I know, but I am certain I have the attributes to succeed. The club has come a long way since then, and I hope to further its development. I believe there are trophies to be won for Liverpool this season and I will strive to take advantage of any opportunities presented.”

I knew I had to get to work quickly to give us any chance of a trophy this season. It was not going to be easy. I only had about £7 million available to me.

I took a look at the transfer market, and noticed a few top players that would be available cheaply. I sent my scouts out and they came back with good reports, so I put in a couple of offers, which were accepted. Soon enough, I had my first two new players.

Joaquin– a 30 year old Spanish right winger signed a 3 year, £83,000 contract after making a £3.9 million move from Malaga. He would take over the right wing, which was then manned only by Dirk Kuyt. This would allow Kuyt to play other roles, such as striker or left winger.

Seydou Keita– a 32 year old Malian central midfielder signed a 3 year, £100,000 contract after a £2.5 million switch from Barcelona. Keita would help rest Lieva, Adam and Rodriguez when Gerrard was off injured. He has plenty of experience after helping Barca to numerous trophies.

I was pleased that I could make these deals with no major departures, save for two loan deals for Jack Robinson and Nathan Ecclestone.
Login to Quote

lross
8 years
A concern would be big wages for people who will only give you a good season or two at best mate, no-one to take them off your hands after and may settle for paying them off until they retire or leave in general. Like them both as players though and the transfer fees were low which is a bonus! who you got at LB ?
Login to Quote

chrisyboy23
8 years
Thanks, I was concerned at Keita's wages, but I really needed him as Gerrard would be out for a while. I had used Joaquin i na past save so I knew he was good enough to deserve that wage.
At LB I have Enrique and Aurelio to back him up
Login to Quote

lross
8 years
yeah good thinking, I reccommend scouting 'Kara' CB/CM really good stats and would be a long term solution to defensive midfield options which after Lucas and now Keita, Liverpool do lack.

I forgot about Enrique!

1650 Yo
8 years
i pesonally would of signed another striker carroll isn't rated very well and will probably do very little, and if you lose suarez, then you gonna have to use players that are better elsewhere i.e kuyt & bellamy
Login to Quote

#55577 lross : yeah good thinking, I reccommend scouting 'Kara' CB/CM really good stats and would be a long term solution to defensive midfield options which after Lucas and now Keita, Liverpool do lack.

I forgot about Enrique!

yeah i will do actually, any idea how much he will cost going into my second season?
Login to Quote

#55641 1650 Yo : i pesonally would of signed another striker carroll isn't rated very well and will probably do very little, and if you lose suarez, then you gonna have to use players that are better elsewhere i.e kuyt & bellamy

did think about that, but really didn't have the money, and I knew no one would pay anywhere near to Carrol's "value"
I have used Carrol, Saurez and Kuyt up front, and Bellamy in a few situations
Login to Quote

As soon as I entered my office, I was bombarded with questions from the staff. After listening to all of them, I decided to work out a plan of action. It seemed there was a lot of work to do to get Liverpool back on track.
I delegated some of the jobs, like pre-match prep to my top staff, to give me some time to get my head around the toughest jobs. It had to think of line-ups and tactics for the upcoming games. Eh, what games? Oh yeah, I still have to do that.

Eventually I had it done. We would face a mixture of fairly easy and fairly difficult teams. We would start in Scotland, facing Hibernian before travelling to Mexico to face Cruz Azil. Then we would take on FC Bayern at home, after that it was away again to Nice, in France. We would finish at home against PSG.
And we would face these teams, and the Premier League teams, in an attacking formation. It planned to have the regular back four behind a lone central midfielder, who in turn was behind the wingers and an attacking midfielder, with two strikers up front. I was aiming to take the game to the opposition. It could be successful, but it could flop. It being used in England would depend on a good pre-season.

After holidaying in Scotland for three days, we finally got under way. Both Charlie Adam and Craig Bellamy grabbed us a goal each to give us a 2-0 lead. Unfortunately, In Mexico, despite dominating, we were unable to come away with anything but a draw. Then we came home. Amazingly, we thrashed Bayern 4-0! Maxi Rodriguez got two, Bellamy one, and Raheem Sterling one. We continued our form to beat Nice 3-0 (Bellamy-2, Kelly) and a 1-0 win over PSG (Carroll)
Login to Quote

DeeVDee
8 years
Try Kiko Femenia from Barcelona B for 4.8m in the second season,Very good young right winger.
Also Yoni Bruyne is a good DM..his stat's ain't the best but he is a very good young talent,he will cost no more then 2.5m from Standard.
Login to Quote

Glenn T
8 years
Hey mate, how do you post pictures from the net onto this website? Like the pic of King Kenny, Keita, Joaquin.
Login to Quote

#55769 DeeVDee : Try Kiko Femenia from Barcelona B for 4.8m in the second season,Very good young right winger.
Also Yoni Bruyne is a good DM..his stat's ain't the best but he is a very good young talent,he will cost no more then 2.5m from Standard.

Cheers, i will try to get Femenia, but I don't need Bruyne.. as you will see in the January update (when it comes)

And Glenn T, I did it by uploading the files from my computer, then just put them in the post, but I couldn't do it in the 2nd update, I'll try to find out how to though

chrisyboy23
8 years • Edited
SUMMER UPDATE:
I took a long look at the schedule for this month. It would be tough, but all the games were winnable. In the Premier League, we would face Wolves and Sunderland before taking on Derby in the League Cup, then it would be back to the League again for Tottenham.

Away at the Molineux was always going to be difficult, but we had the quality to win by a couple of goals. Although, with Gerrard out, it would be much tougher on us. Things didn’t start well for us as our top left winger, Stewart Downing suffered an injury that would keep him out of the line-up for a couple of months. We had to wait until just past the hour mark for a goal, one that came from the penalty spot. Daniel Agger sent the ‘keeper the wrong way to score the three points for us. 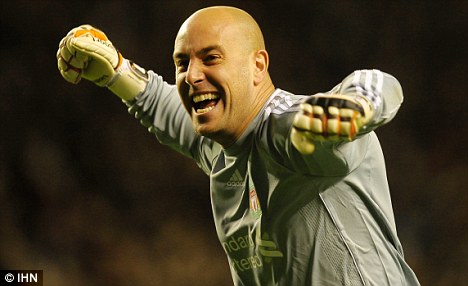 Back home at Anfield, things were getting tense in the run up to the Sunderland game. I could just feel it in the air. They were a top team and we would have to play very well to beat them. Once again the first goal came from the penalty spot. Craig Bellamy powered the ball over the Black Cats’ ‘keeper. Just three minutes later, we had another penalty, but Rodriguez failed to score. Craig’s goal stood for us despite the constant pressure from Sunderland; I was very nervous we would concede late. But then, out of nowhere, we succeeded in scoring on the break; Leiva knocked home the header.

We would stay at home for what seemed to be a relatively easy game against Derby in the 2nd round of the League Cup. I knew this cup was one we had to win this season to prove we are going somewhere. But we didn’t get off to a good start. We had trouble early on and Glen Johnson ended up getting booked after just two minutes. I could not work out what was going wrong here. I gave them a bit of a hair dryer treatment at half time to ge them going, but it still didn’t work. Eventually, and luckily, Rodriguez grabbed a late goal to win it for us. The insurance goal came from Charlie Adam just four minutes later. Our struggles had counted for nothing—thank god.

If the Sunderland game had made us nervous, I dreaded to think what state the team would be in for this game. Even I was feeling the nerves for once. It didn’t seem I had a reason to be nervous from our start. We took the game to them from kick off, and were rewarded for it. We were given our fourth penalty in three league games. Dirk Kuyt obliged by putting it home. The Dutchman doubled his own tally barely a quarter of an our later. We seemed to be in control and destined for three easy points. But then Adebayor popped up to make it 2-1. That made half-time very difficult. We were sluggish out of the blocks for the 2nd, and paid our price; Defoe and van der Vaart netted one each to give Spurs the lead. But just more than ten minutes later, Kuyt grabbed his hat-trick. It remained tied until the 79th minutes, when Dirk Kuyt scored again!

I sat back in my office, and sighed. This job was pushing me to the limits already! Even when playing, I had never known this amount of pressure. And yet there was more to come, Manchester United was coming up in the next month...
Login to Quote

mwichmann
8 years
To the question of how to get images into the posts, whoever it was asked, look around in the help sections of this site, there's information. Pretty much, find one of the free pic sites, upload there, and use the links they provide you with to point to the pics in your posts.


I see why you went for a pair of good players to quickly shore up the club. The fact that they'll only give you a few years isn't that much of a problem if you've gotten just the right people, and they give you that boost you need - except if they then get in the way of a rebuilding project. The transfer fees are nothing to worry about but the salaries a bit of a pain. Well, what's done is done, good luck! (And I really did like Joaquin in one game I had him at Newcastle - as I recall that career was back on FM08, but it was several years in before I landed there and brought him over so probably about the same "player age". Sure could pick out a deadly cross on occasion).
Login to Quote