Paris Saint-Germain Football Club also known simply as Paris Saint-Germain and familiarly as Paris SG or PSG, is a professional association football club based in Paris, France. The club was founded on 12 August 1970, thanks to the merger of Paris FC and Stade Saint-Germain. PSG has been playing in the Ligue 1 since 1974, the current championship record, and is one of the most prestigious outfits in French football having won two League titles, eight French Cups, three League Cups and two Trophées des Champions. PSG, along with Olympique de Marseille, is one of only two French clubs to have won a major European trophy, claiming the UEFA Cup Winners' Cup in 1996. PSG was named IFFHS World's Club Team of the Year in 1994 and ranked 1st in the UEFA Team Ranking in 1998. The capital club is the only French club to ever achieve these honours. PSG is currently ranked 16th in the IFFHS and 46th in the UEFA Team Ranking.


American manager, Marshall Northwood takes charge at Paris Saint-Germain after being touted as one of the favourites to take on after Capellos era. Quoting the manager, the pressure of managing PSG is high, due to the high expectations of the board : "Whoever takes Carlo Ancelotti's place will be under stress to manage meeting expectations".

Later that night, Carlo Ancelotti has been quoted saying : "Marshall would be a great replacement for me, and I hope he can carry on my legacy". The media was surprised after Ancelotti's statement.


Transfer targets publically announced. Ceara departure is close, as Anyukov is close to being transfered to PSG. 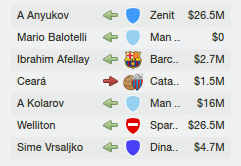 shaneo insaneo
8 years
With the amount of money PSG have . Would have been good to see better signings,.. and yet another vrsjalko story lol
Login to Quote

crisrko
8 years
I'm not gonna buy messi/ronaldo. Vrsjaliko is a target, not a sure transfer meng. And don't underestimate Balotelli/Welliton
Login to Quote

crisrko
8 years
Great pre-season as PSG wins all their matches except the draw against Werder Bremen. Wellinton enjoys two hattricks in two pre-seasons matches, as Balotelli, Vrsjaliko and Anyukov prove themselfs too.

The final squad and transfer updates have been issued onto the fansite. 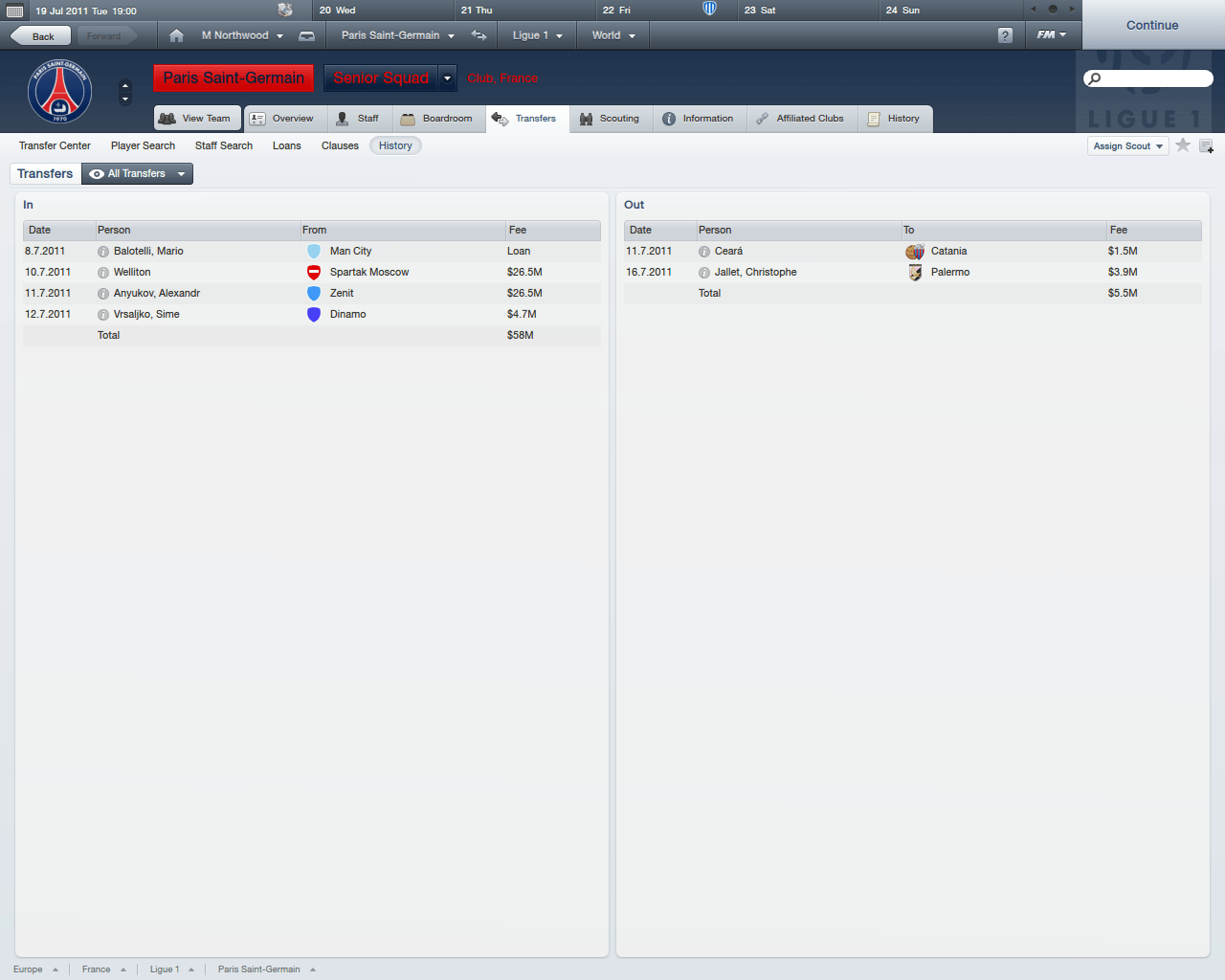 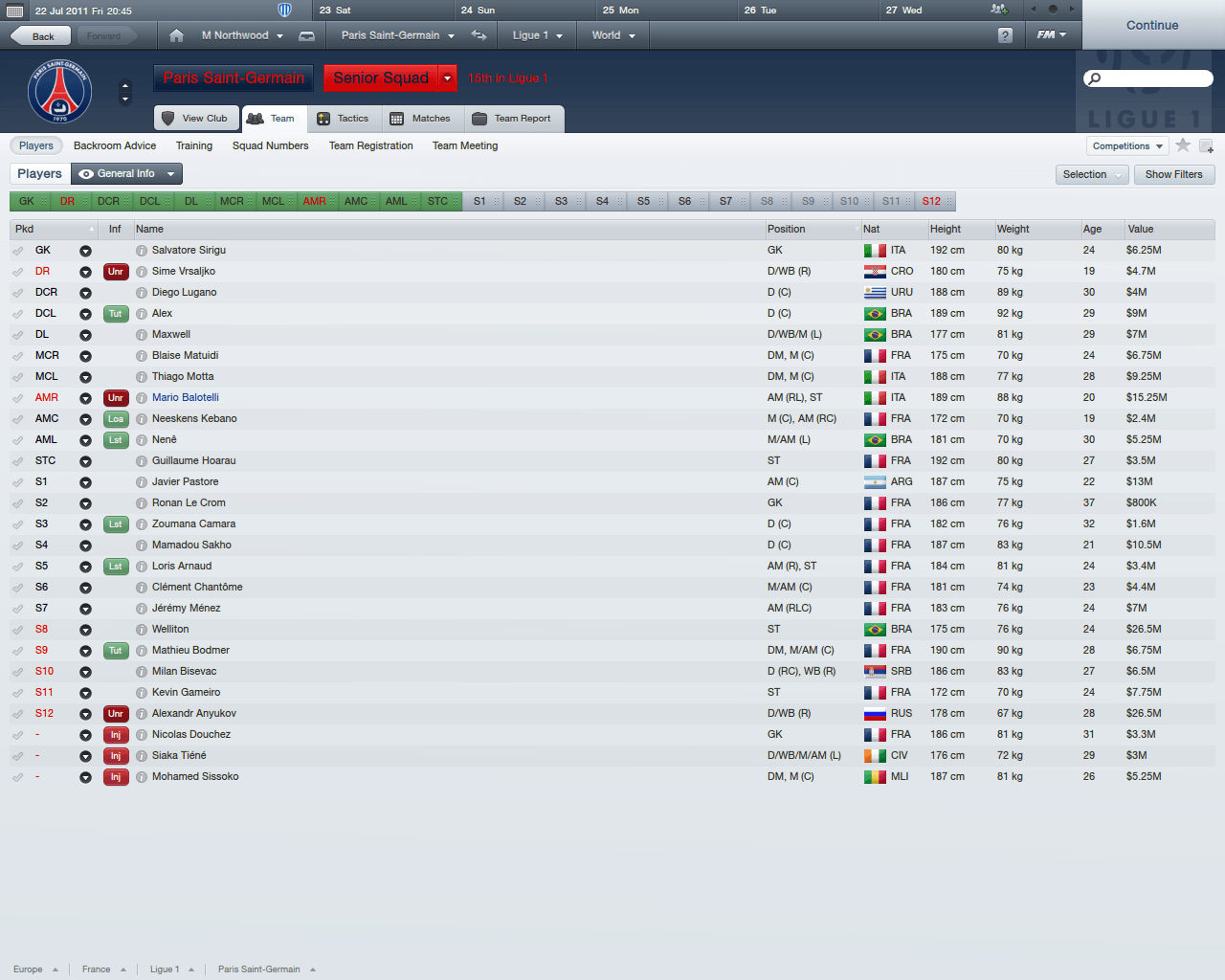 crisrko
8 years
Never succeeded in getting cavani for low :(. And I don't like damiao

#59649 FMRegen27 : why did you sign welliton for that much you could've got damiao for that or even cavani


I was thinking the same thing until I saw him values are in $.
PSG has a lot of money but spend it well. What are your goals? French Ligue I win this season, followed by Champions League in the next 2?
Login to Quote

crisrko
8 years
Well, winning the Ligue 1 is a board must. And I should go to atleast (I think) quarters in the europa league. Will be a tough season, but with these players, I'll make it!
Login to Quote

crisrko
8 years
PSG announce the shoking transfer of the young german attacking midfielder Marko Marin, for a fee rumoured to be around 26.000.000$.
PSG had a decent month, residing third place into the french league with 11 points out of 15, due to drawing to Toulouse and SB 29.
Login to Quote

You are reading "A manager's tale - Marshall Northwood".