Craig Barton a 27yr old from Sheffield appears to be applying for managerial jobs with nothing on his CV except a long list of Football Manager Achievements. He has no real managerial experience and has never played any higher than Sunday league level and even there he never excelled. Barton got the idea of applying for jobs whilst having a heavy night in the pub with friends. Deciding it would be a laugh he’s giving it a try. Surprisingly he’s nothing but confident and has asked me to write about his Comedic efforts to break into Real life football management........................TO BE CONTINUED
Login to Quote

Sensationally Craig has been offered 3 job Roles after been rejected by England and Hereford Barton was delighted to get some positive news. He’s been offered part time managerial roles at PoPa FC, Bela Krajina and Szeged 2011. After weighing up his options he’s decided to leave England behind and accepted the offer from Bela Krajina.
It’s not known why he was offered this job but it is widely believed the chairman’s lack of English could be to blame. It’s possible he miss read Barton’s football manager achievements as real. However Barton isn’t going to highlight the mistake after being offered £1.1k p/w on a yr contract.
There are not a lot of finances available with only £40k transfer budget and £500 wage budget available. He will have to work within tight boundaries and it remains to be seen how Barton will fair in the Slovenian 2nd league.
Login to Quote

But now that you have written the backstory, it will be interesting to see what/how you write about the actual matches.
Login to Quote

Kiwi
10 years
Ouch GBP500 wage budget. How many loaners are you allowed per season?

Good luck, nice intro....tell us about the club, the staff, your facilities, transfer targets etc.

I'm sure you will do very well!
Login to Quote

barton6435
10 years
The Club
Although formed in 1926 the club has no history to speak of, The Trophy Cabinet is completely bare other than a few cobwebs. The Club Play its home games at SRC Loka with a maximum capacity of 1517 all-seater. The training facilities are adequate at best and the youth facilities are almost non-existent.

The staff are pretty inept but as they are all on under £100 and finances are tight Barton has decided to give most of them a chance although he quickly dispensed of the clubs only scout and set out to find at least 2 new ones.
During early pre season the squad was assessed and seem to be fairly average, although Saso Ogric stands out as the clubs best player. Although close behind is Marko Zagar the clubs LB as been handed the club Captaincy. 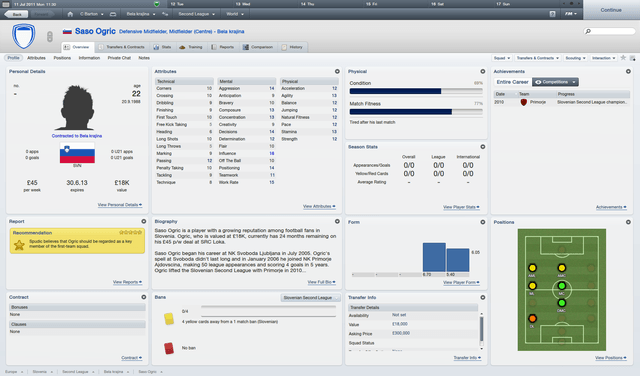 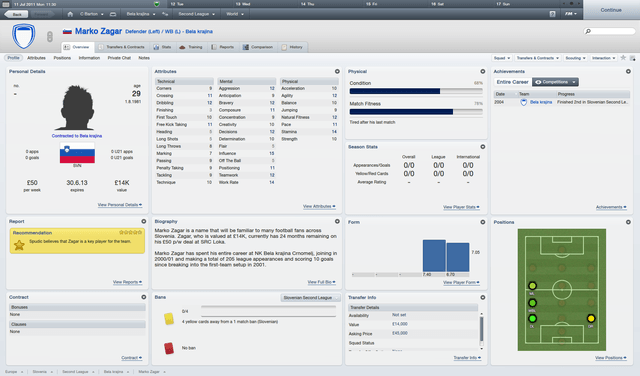 There are no specific transfer targets with Barton keeping any deals close to his chest, although he has identified DM, CM, AMR and DR as the main positions to be strengthened. Barton Also let it slip that he will be playing a 4-1-2-2-1. 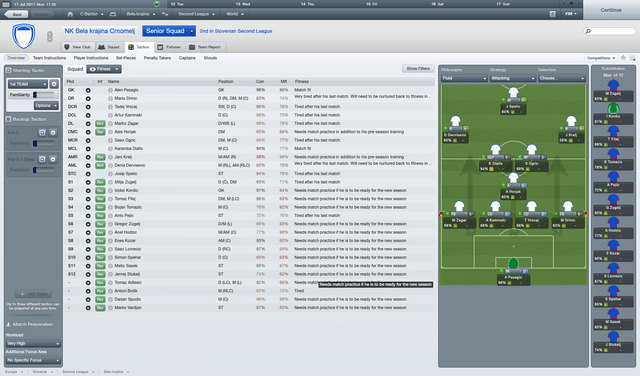 Well after Pre Season Barton seems to be struggling to make the switch from PC to real life management. Barton came in and his first friendly was against Kolpa a Slovenian lower lge team. After a good start Barton’s men swiftly brushed them aside with a 4-1 victory. However Barton's men went on to lose 3 of their next 4 friendly’s and drawing the other the score lines were 2-0 , 2-1, 0-0 and 2-1 dropping Morale dangerously low in the dressing room. 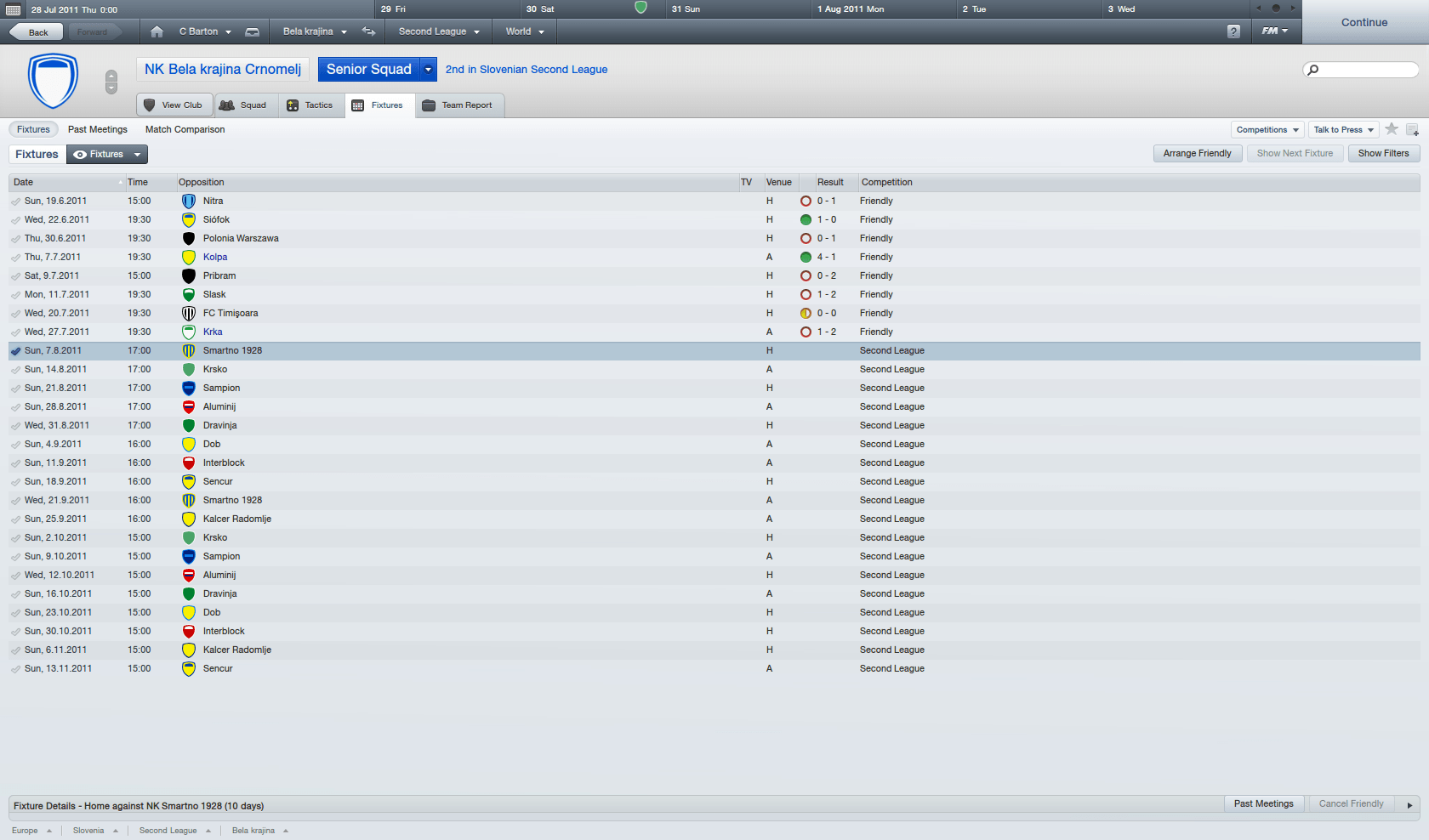 However Barton has been Very active in the transfer market despite having little funds to work with he’s managed to bring in 8 new players whilst retaining all the players he inherited. Barton has spent a grand total of £4.1k on all players but does now have to reduce his wage budget by a total of £2. 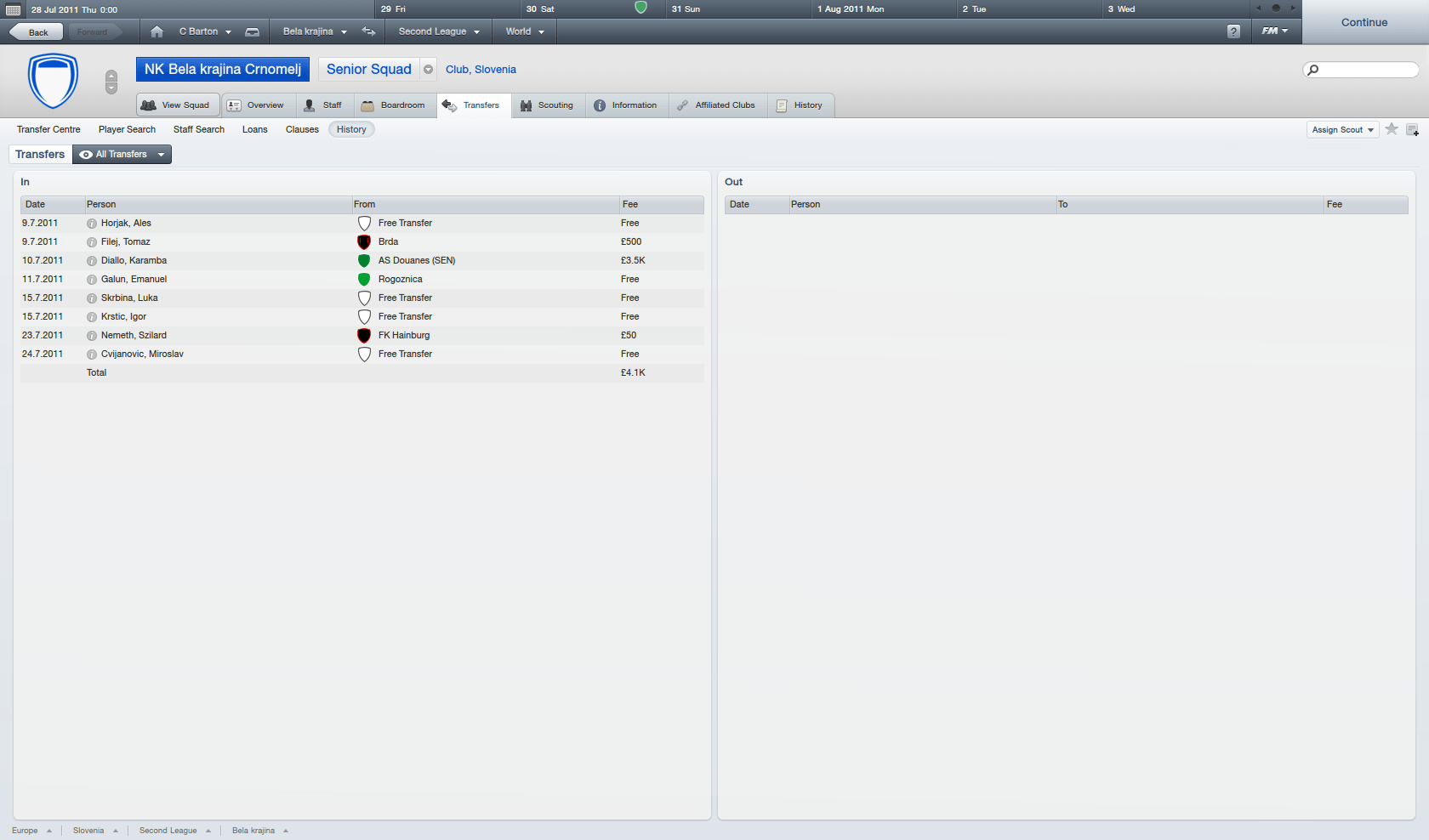 Barton’s best captures are arguably Karamba Diallo for the Cm position and the better known Szilard Nemeth as a backup striker. 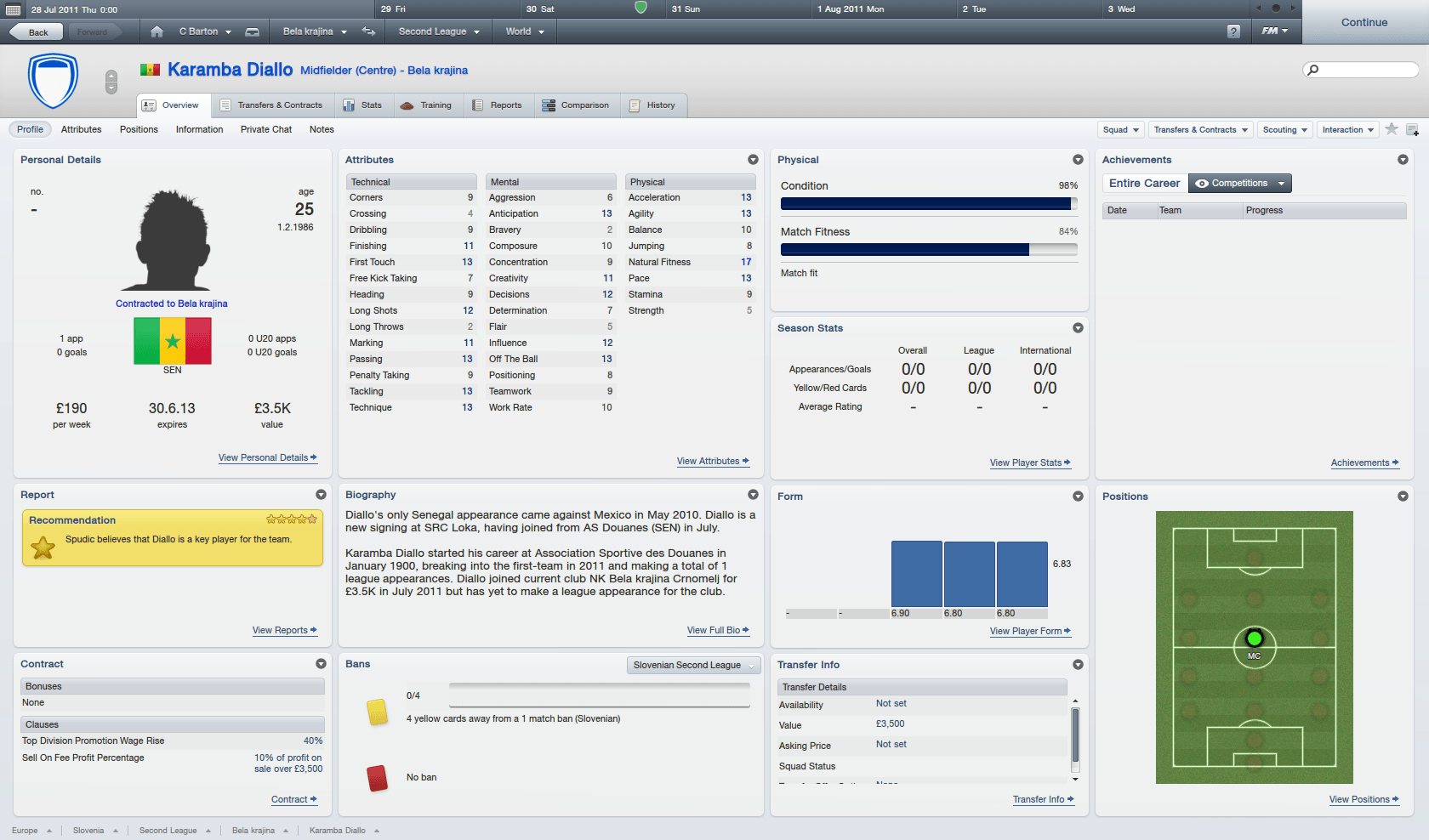 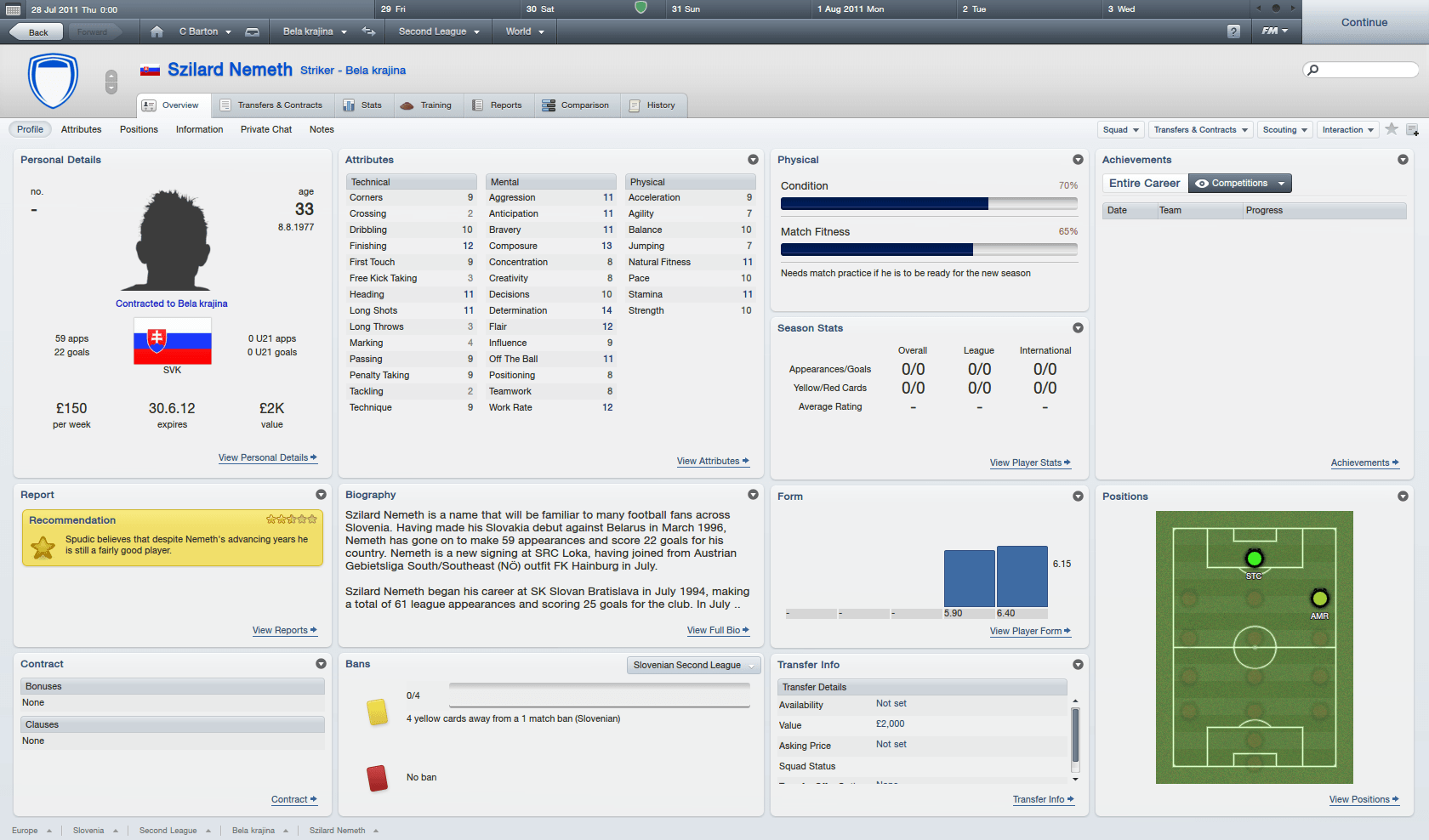 Mixed results in august has left Barton scratching his head, unfamiliar with this lge he’s unsure fully as to whom he should be beating. With 6 games played in august Barton came away with 3 wins one of which saw his team progress to the 2nd round of the cup, early results soon slipped away as Barton’s men also suffered 3 defeats leaving them currently perched mid table.

The Stand out player for the month is Denis Dervisevic playing 6 games scoring twice and providing 4 Assists. 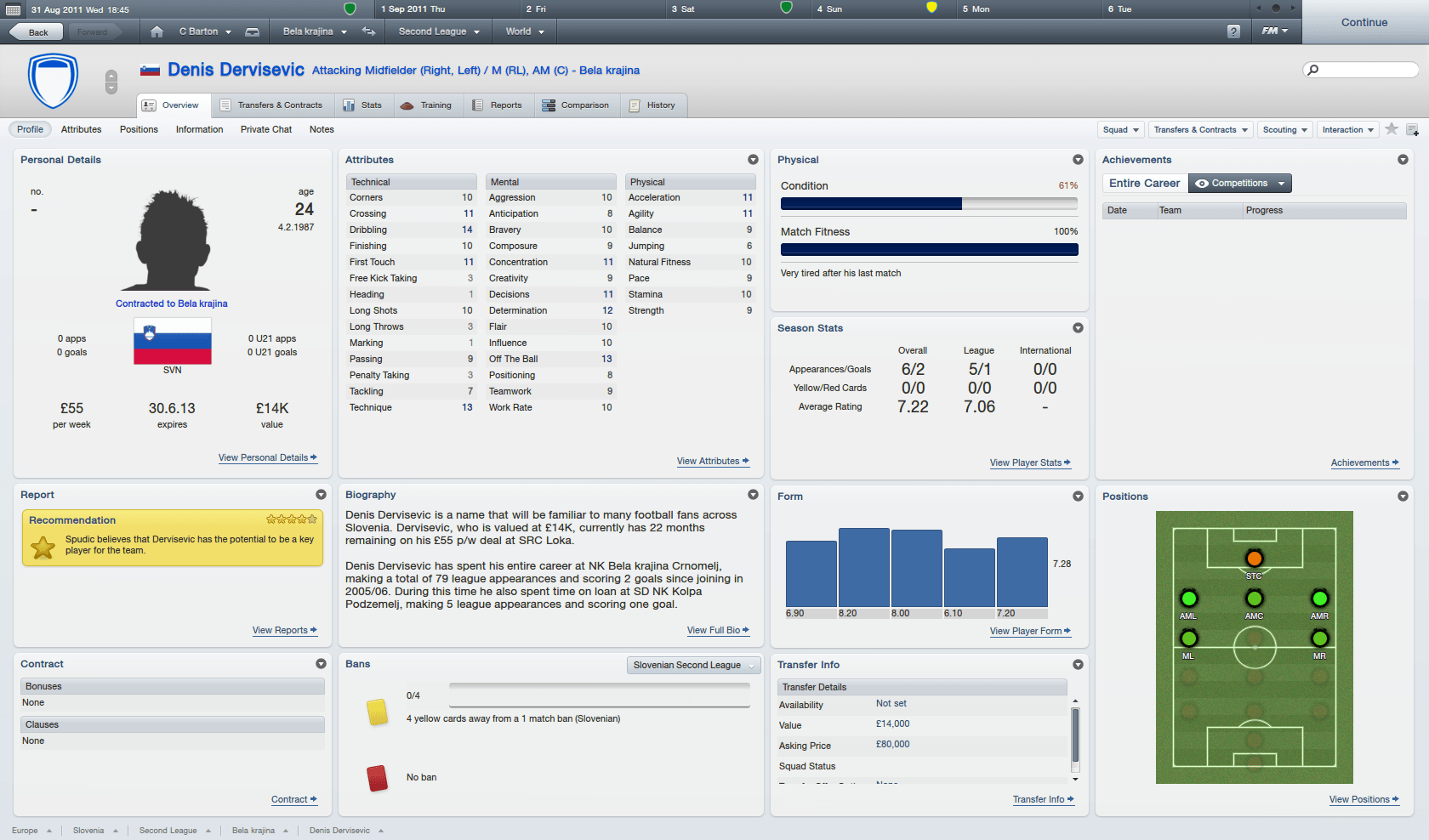 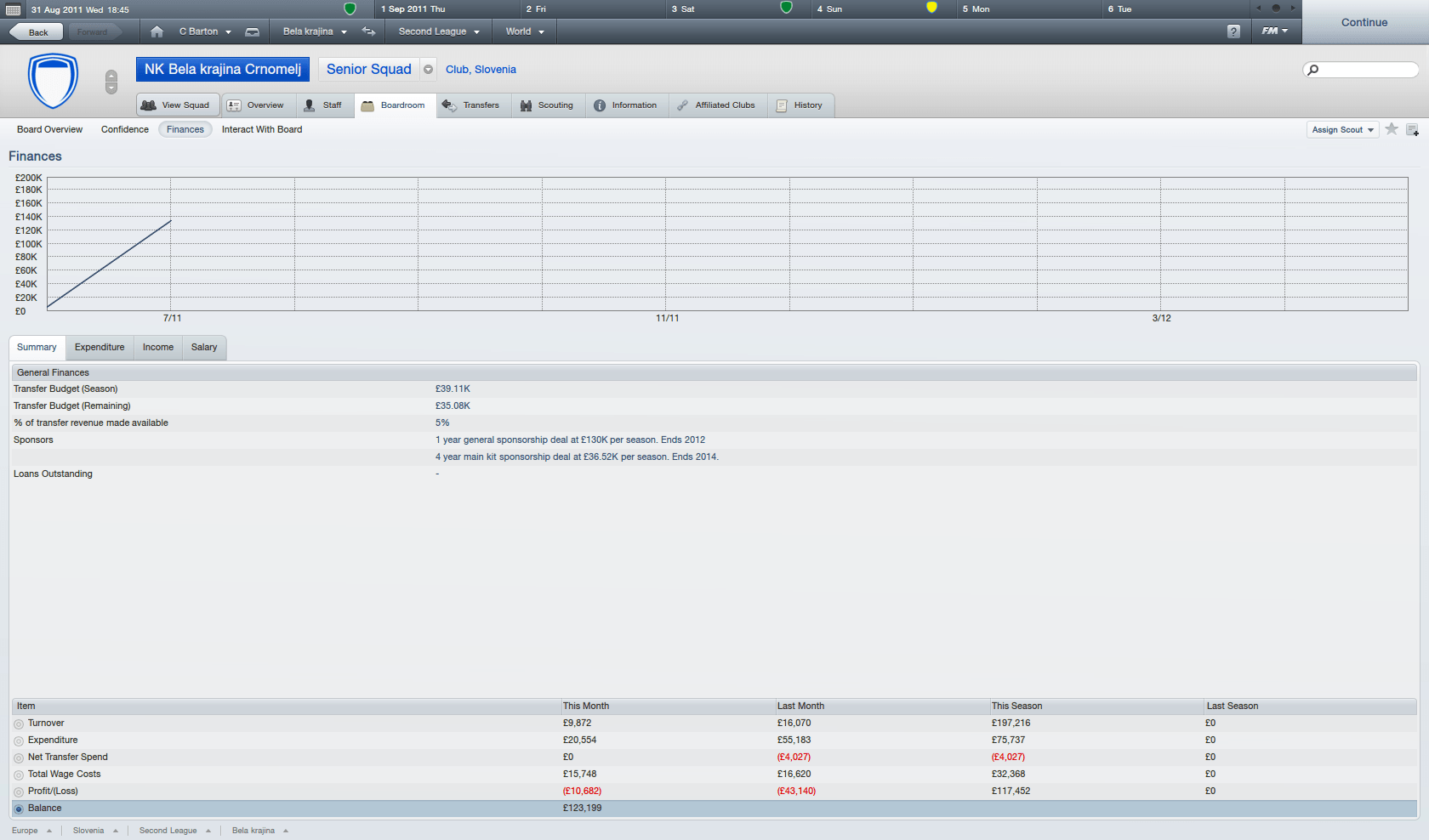 Again September as brought a bag of mixed results, with 6 games played Barton’s set about winning their first 3 games. They even managed to beat Domzale who currently sit 3rd in the 1st division and are Bela Krajina’s Parent club. Barton’s men didn’t just fluke their way through to the quarter final they beat Domzale 4-2 on home soil. Again after the 1st 3 games results turned and where followed by 1 draw and 2 defeats. Barton’s men currently sit 7th and a 10 team lge. 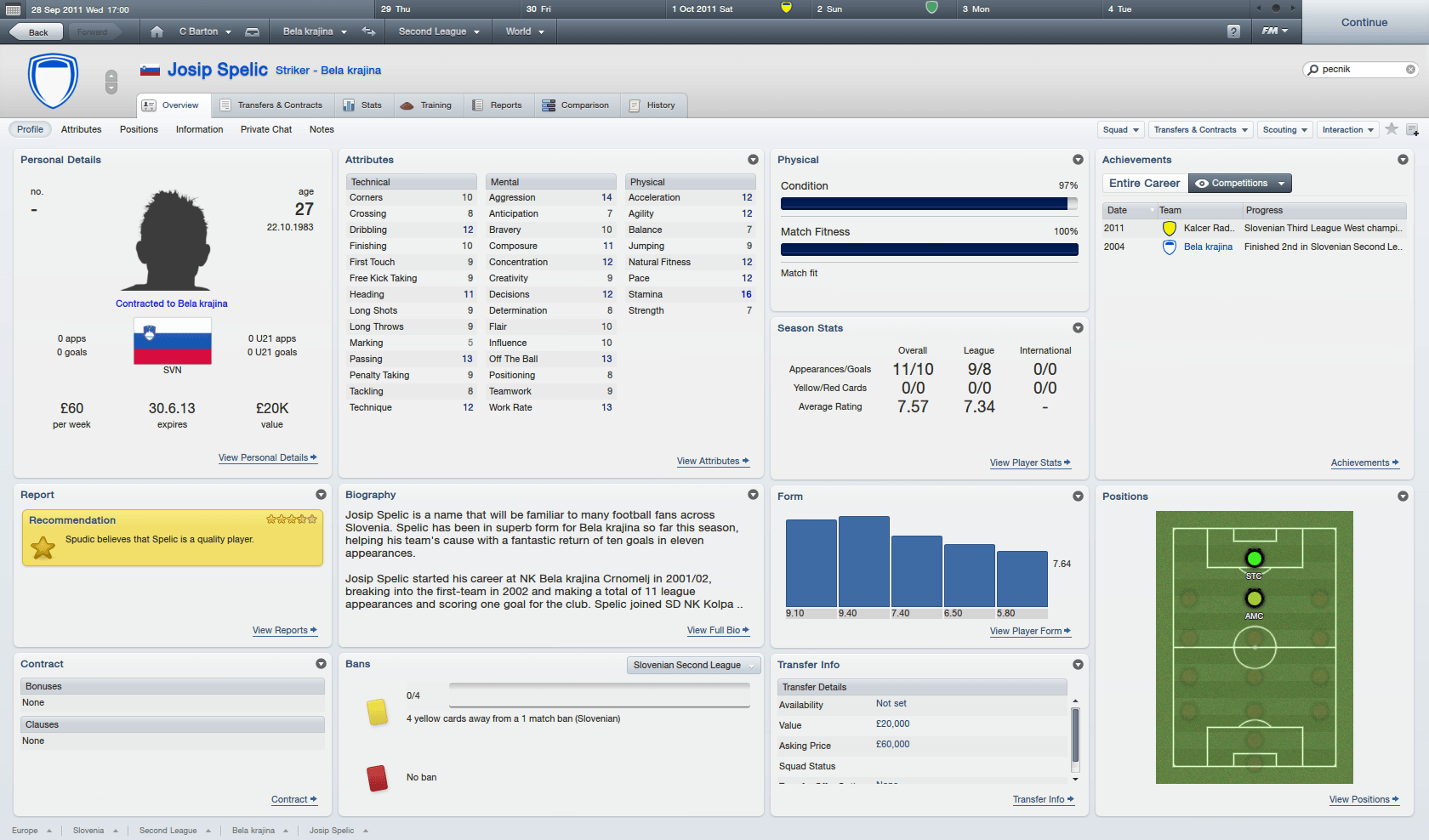 Despite qualifying for the quarter final of the cup the finances still make a worrying read. £29k was the reported loss for this month leaving the club with only £89k left in the coffers. With the club only utilising 27% of the stadium on match days something has to be done to bring in more cash and fans.
1
Login to Quote

Akash
10 years
What is wrong with your finances? Are you paying too much for appearance and goal bonuses, or is it the agent fees? Better rectify the problem, because the club will surely sack you if you don't have control over their money.
Login to Quote

Well a fantastic 3rd month in charge of Bela Krajina for Barton not only has he somehow masterminded the club qualifying for the semi-final after a 2-leg victory against non-league Paloma, but he’s also gone the month unbeaten. Drawing only 1 of the 7 games the month has seen Barton's men fly up the league into 3rd spot with a game in hand on 2nd and currently on the same points. 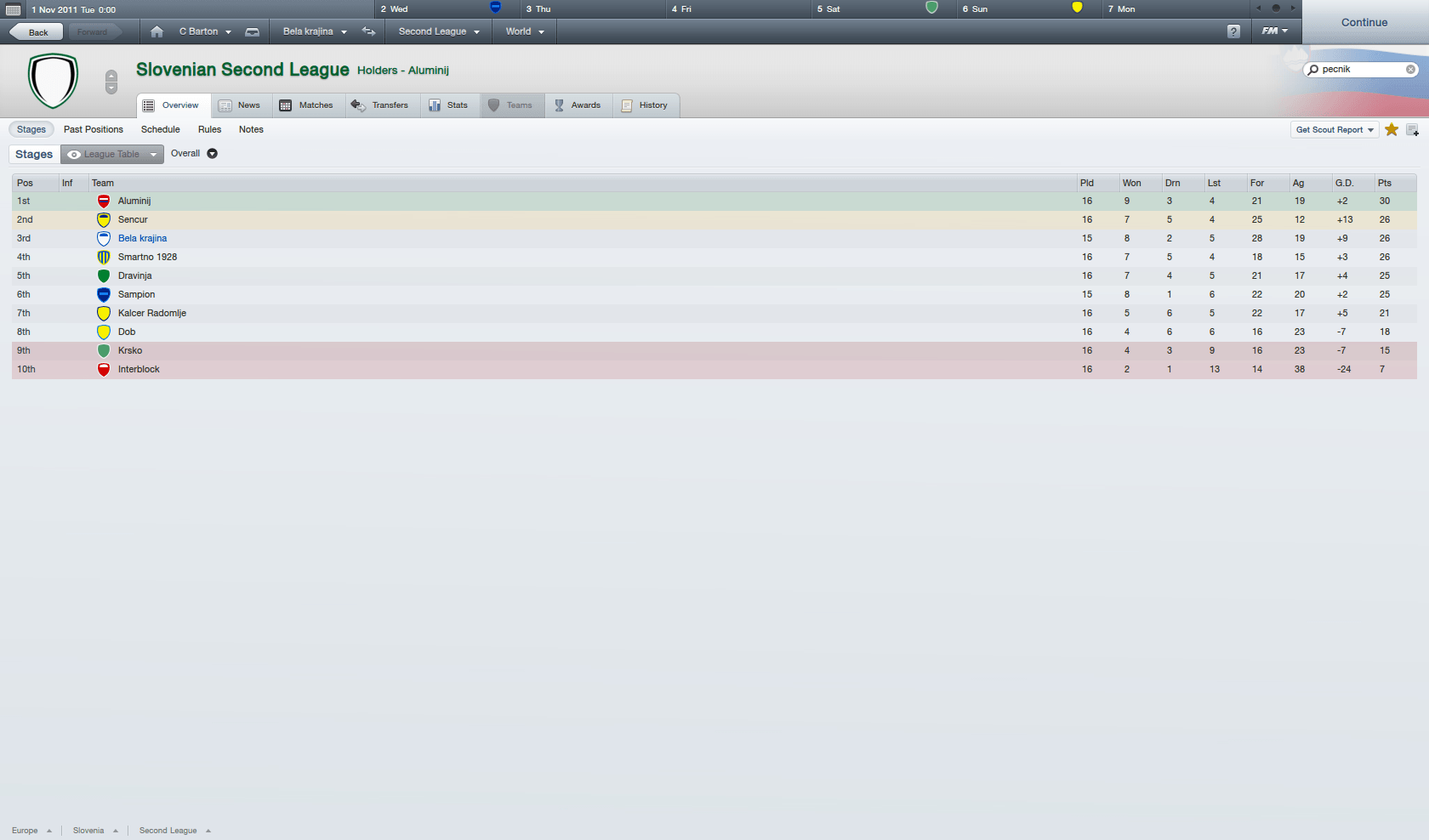 Barton is putting this month’s success down to some sterling performances from his CB Tadej Vrscaj, who Barton as also crowned the team player of the month. 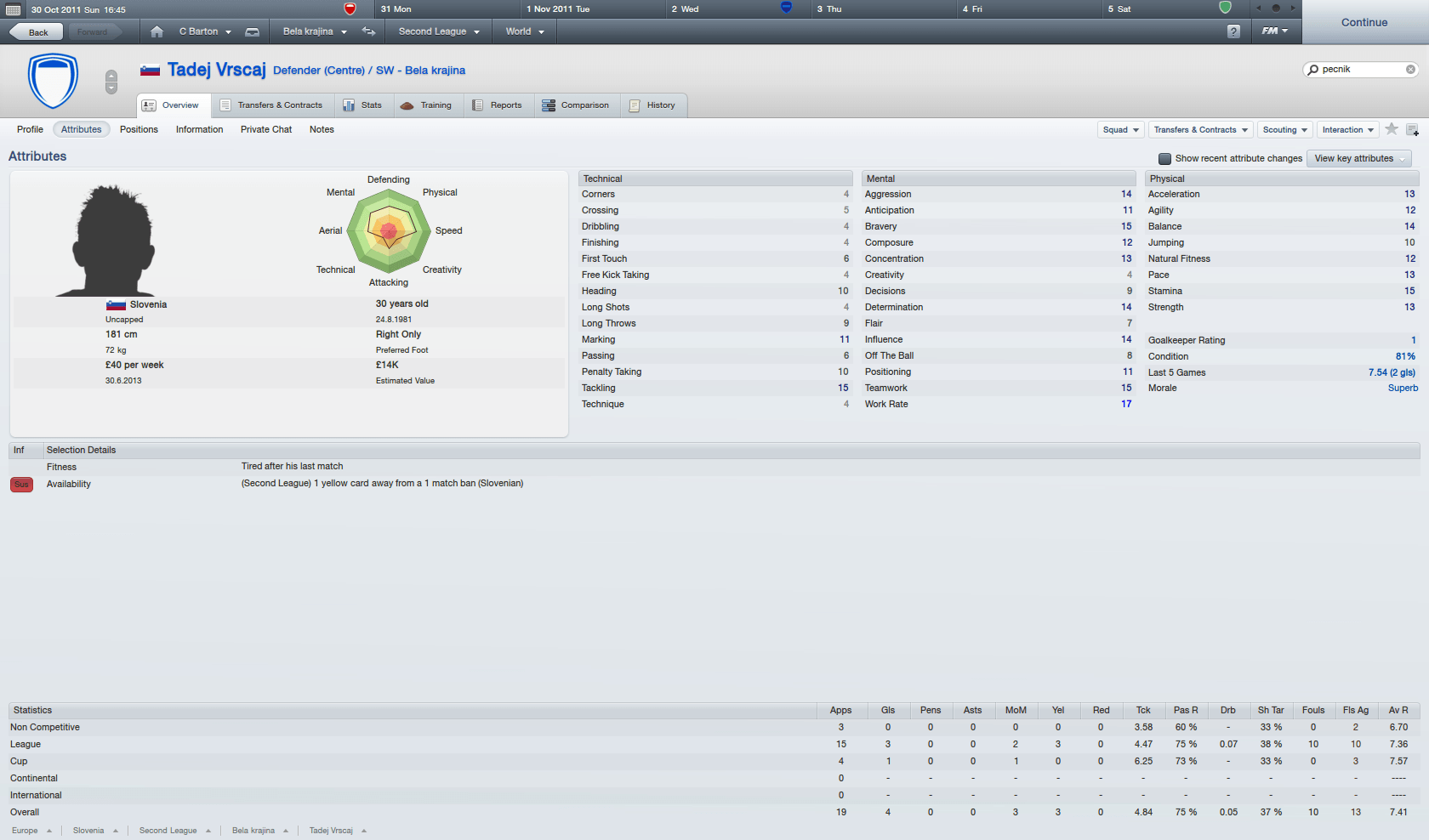 Again the finance report makes for miserable reading with a £25k loss, leaving the club with a mere £64k left in the bank. However with only 3 league games left there should be enough left in the coffers to see the season out without any threat of administration. Chairman Andrej Fabjan must surely be dreaming of a cup win now to help boost the depleted treasure chest.
Login to Quote

its me
10 years
regarding your finances. u need to offlaod some players to clear the wage bill. it doesnt matter whether your under your current wage bill, the fact is your still losing alot of money every month
Login to Quote

barton6435
10 years
Come the end of the season think just about half of my squad are out of contract so will give me chance to get it sorted, Hopefully
Login to Quote

With only 3 games played in November Manager Craig Barton was keen for his men to finish on a high before the winter break. Barton’s men duly delivered Shooting themselves to the top of the league and are now sitting 4 points clear. Barton’s men put in some good performances winning all 3 games scoring 5 and only conceding once. 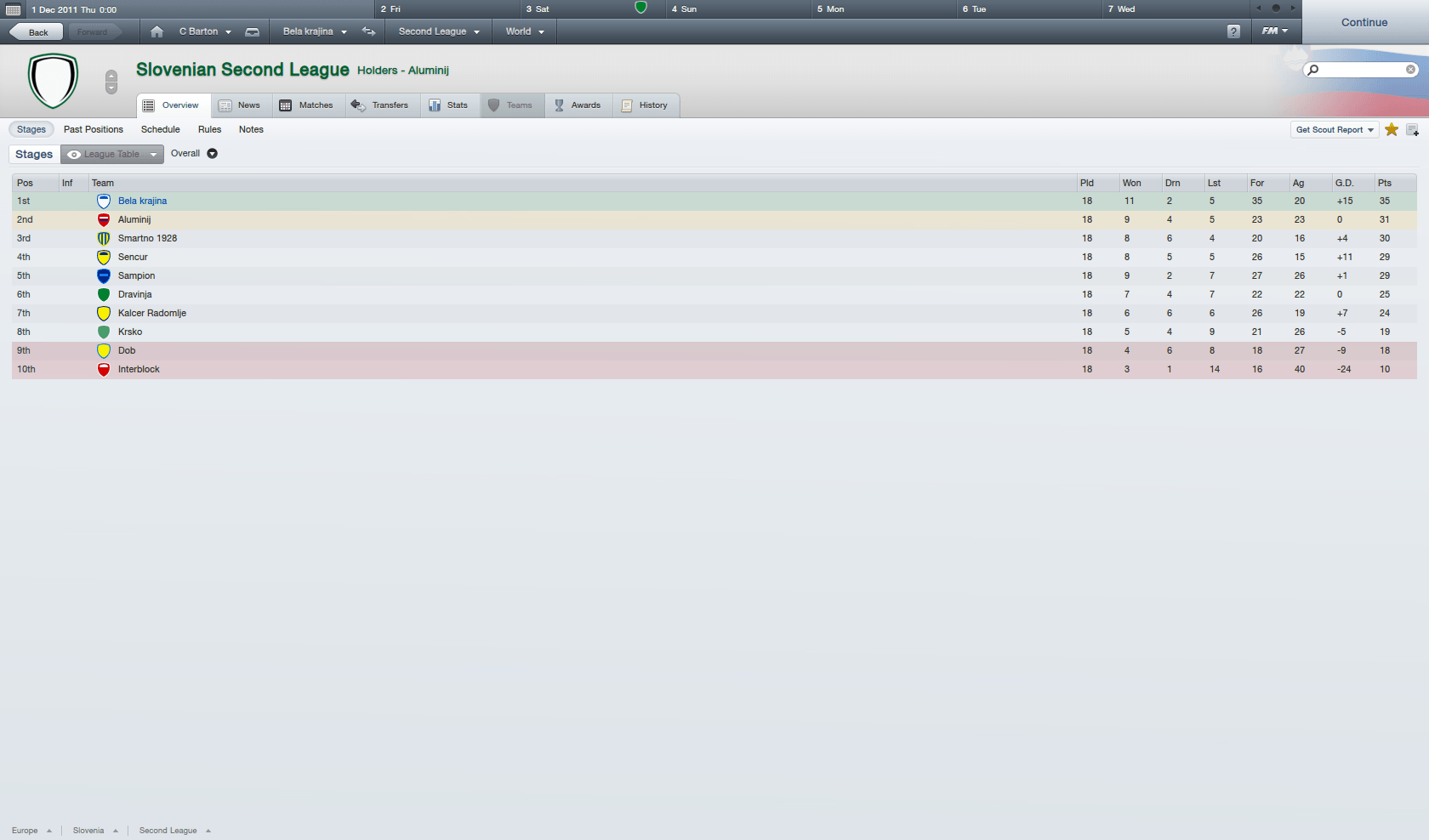 With no stand out player this month there was no player of the month but Barton stated this month had seen everyone play above and beyond there abilitys.
The Finances still make for a worrying read again losing £24k and now with a mere £40k in the bank. With the club paying approx £2200 a week on wages this is set to be slashed but still wont be enough to save the worrying decline in available funds. To make things worse for the club they don’t have another competitive game until March and it appears it costs more than they receive back whenever they arrange a friendly. 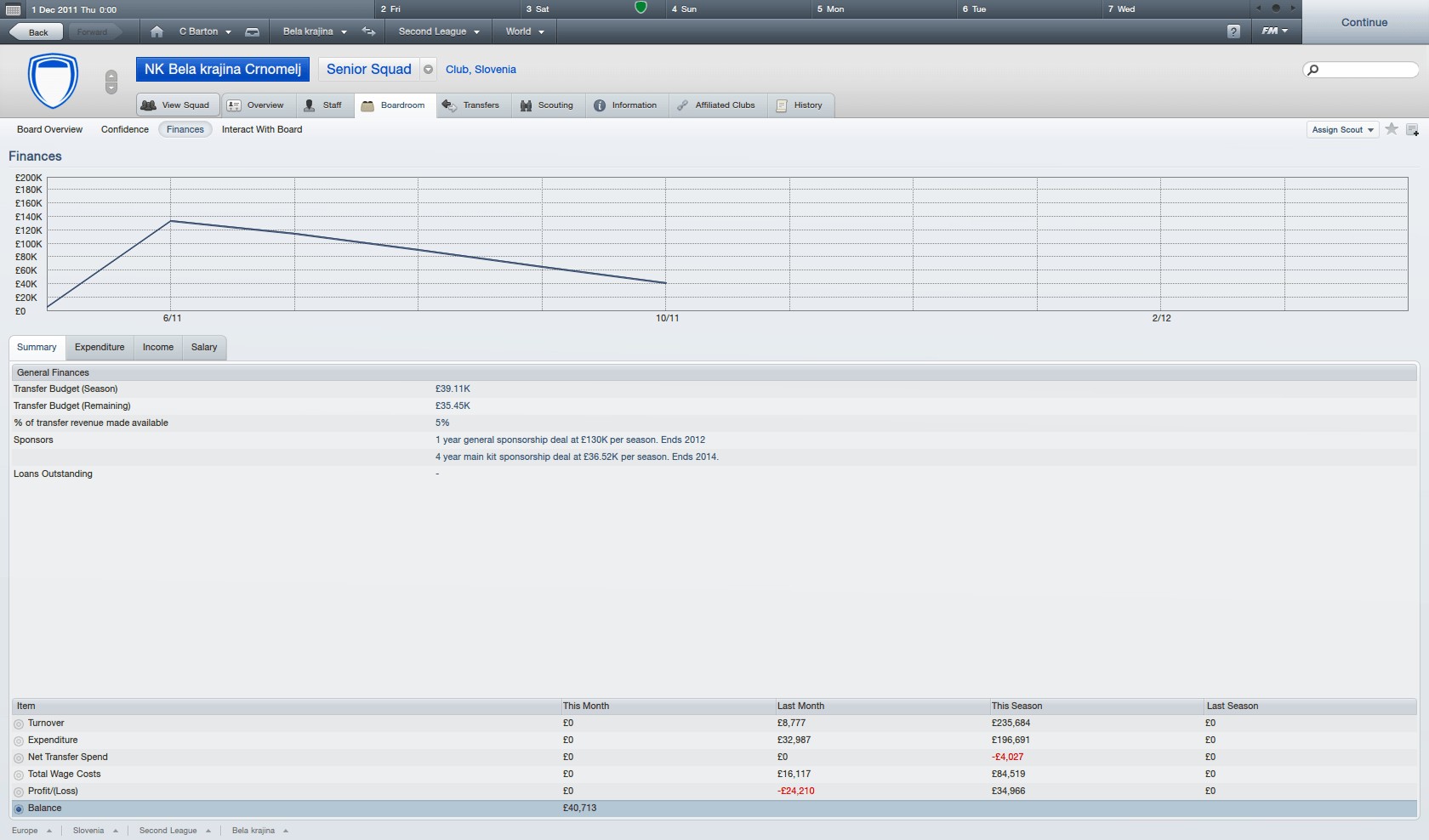 Rex_Wrex_Wrecks
10 years
You should hopefully be getting the sponsor money sometime soon which ought to fill your coffers. But other than that, how do you intend to cut losses before the season ends? Are you planning to do anything about it or are you just going to carry on and assume the board wouldn't sack you because you're not above the wage budget? Personally, I don't think you'll be fired because you're under the wage budget and also you're doing well in the league. But I think if your balance gets reduced, you may have a very small transfer budget next season.
Login to Quote

You are reading "Barton Zero To Hero".