Given that the Northampton job was not really a prestigious one, with the club predicted to finish mid-table in League Two by the media, the Northampton board certainly had their work cut out for them as they set out to find a replacement for Boothroyd.

They finally found the right man in Glenn Tham, a 29-year-old Englishman of Asian descent. Tham, born in Liverpool and bred a Liverpool fan, originally attempted to sign on as a youth coach at Northampton after years of managing in the small-time Sunday League, but the Northampton board made a bold decision to appoint Tham as manager as no one else expressed an interest in the position. 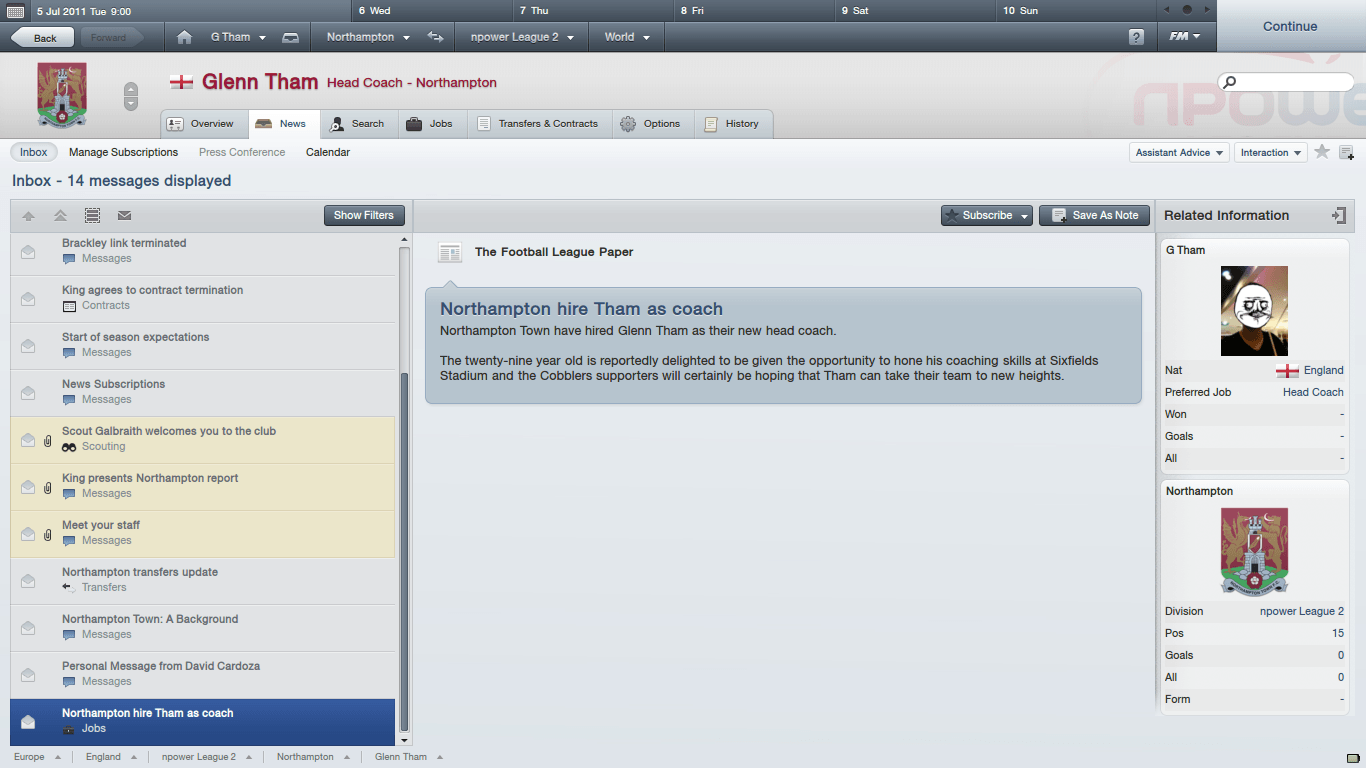 Although a few fans expressed their doubts over a completely unproven manager, most of them were excited about a new manager on the scene. After receiving an encouraging personal message from the board on his first day as Northampton manager, Tham was all ready to finally kick off a managerial career he never intended to pursue. 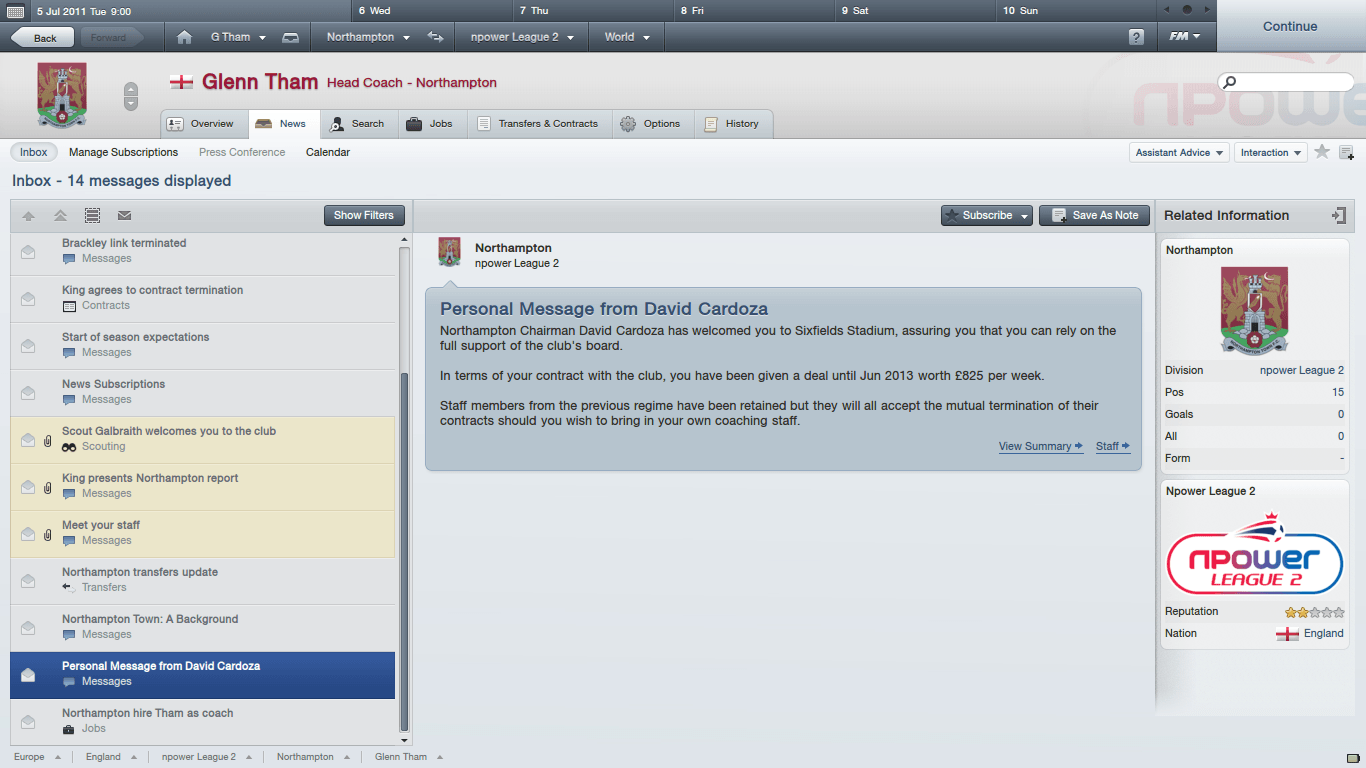 As he took the time to make phone calls to the current Northampton backroom staff, calling them for a meeting in his new office, Tham checked out the history of Northampton on their Wikipedia page. 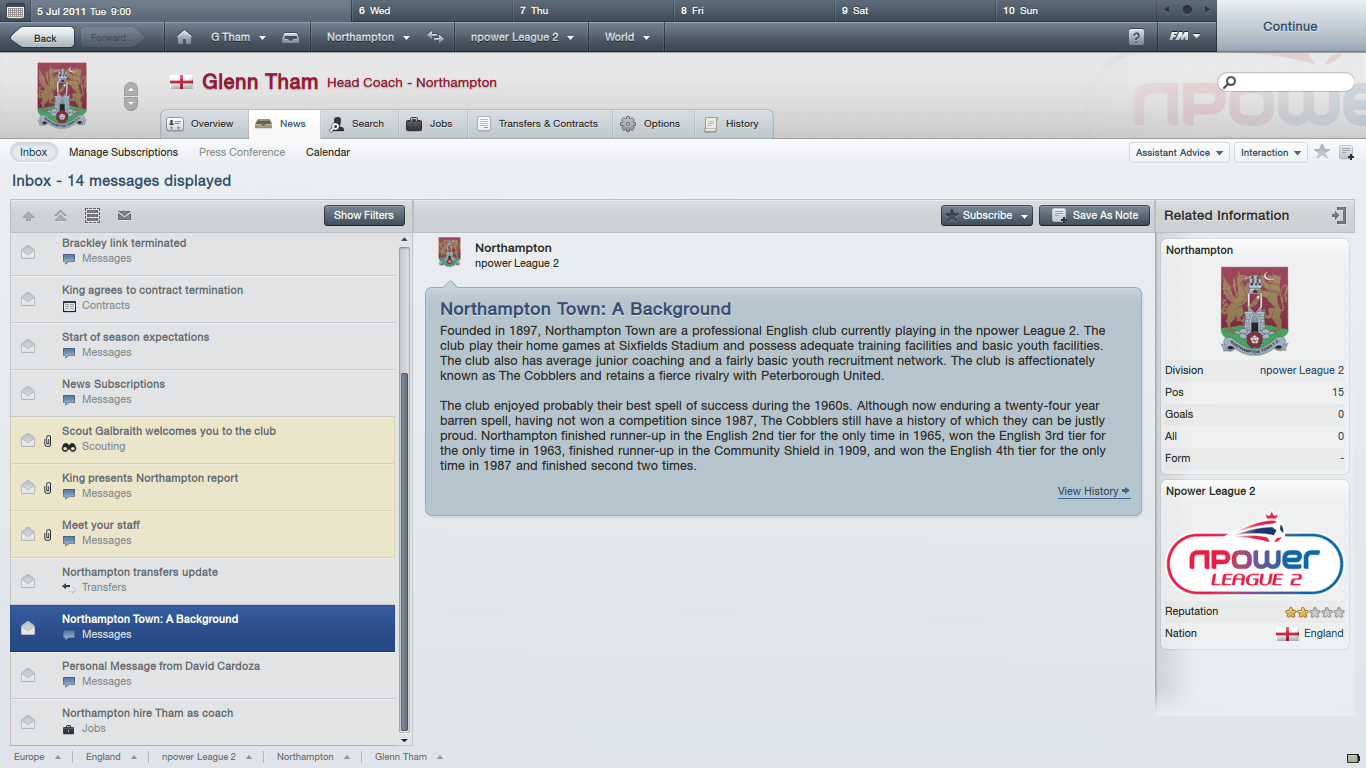 Akash
10 years
Loving the in-game profile picture. All the best!
1
Login to Quote In my first ever press conference, I explained to the media that I was confident of being a huge success at Northampton and that I would be looking to bring in a few new faces, players & staff alike. My predecessor Aidy Boothroyd had brought in many players that didn't fit in my plans, unfortunately it looks like I'm going to have to keep them for at least a year because of their reluctance to leave the club so soon after joining. I also said that the financial difficulty of the club would not stop me from taking Northampton forward, while also warning that I would be "re-shaping Northampton from top to bottom". Lastly I told the media assembled at the Sixfields Stadium that the players could "come to me for anything", be it something concerning them, they had problems, or just for a casual chat.
Login to Quote

Glenn T
10 years
My meeting with the current backroom staff at the club took place right after the press conference.

"Hello there gentlemen," I greeted them, hoping I sounded confident. "As you all know I'm the new manager of this club and your new boss. I would like to have some of my own staff at the club so to make way for them, the reality of the situation is that some of you will have to leave."

Some of the staff looked at each other with worried faces, others remained calm. I looked at the assistant manager, Andy King, who had worked closely with Aidy Boothroyd. "I'll be looking to bring in my own assistant manager," I told him, and although he possessed a calm look, I knew that he had already predicted what was coming next. "Thanks for everything you've done for the club."

Andy King offered a smile. "It's no problem mate. Alright, good luck in your new role. Northampton is a great club and I believe you've got what it takes to lift the club to greater heights." I offered King a handshake, which he took, and after that he left the room, and Northampton, for good.

King was soon followed out of the Northampton door by youth coach Trevor Gould and two physios, Julie Frost and Stuart Barker.

When the staff who had been spared the sack left the room, I made more phone calls, inviting unemployed coaches & physios I had heard of down to the club. My last phone call was made to David Cardoza, the owner of Northampton and essentially my boss, that I would like to cut off the club's link with Blue Square Premier side Brackley Town.

I ended the day by successfully negotiating contracts with a couple of my new staff. A hectic day but all is well. 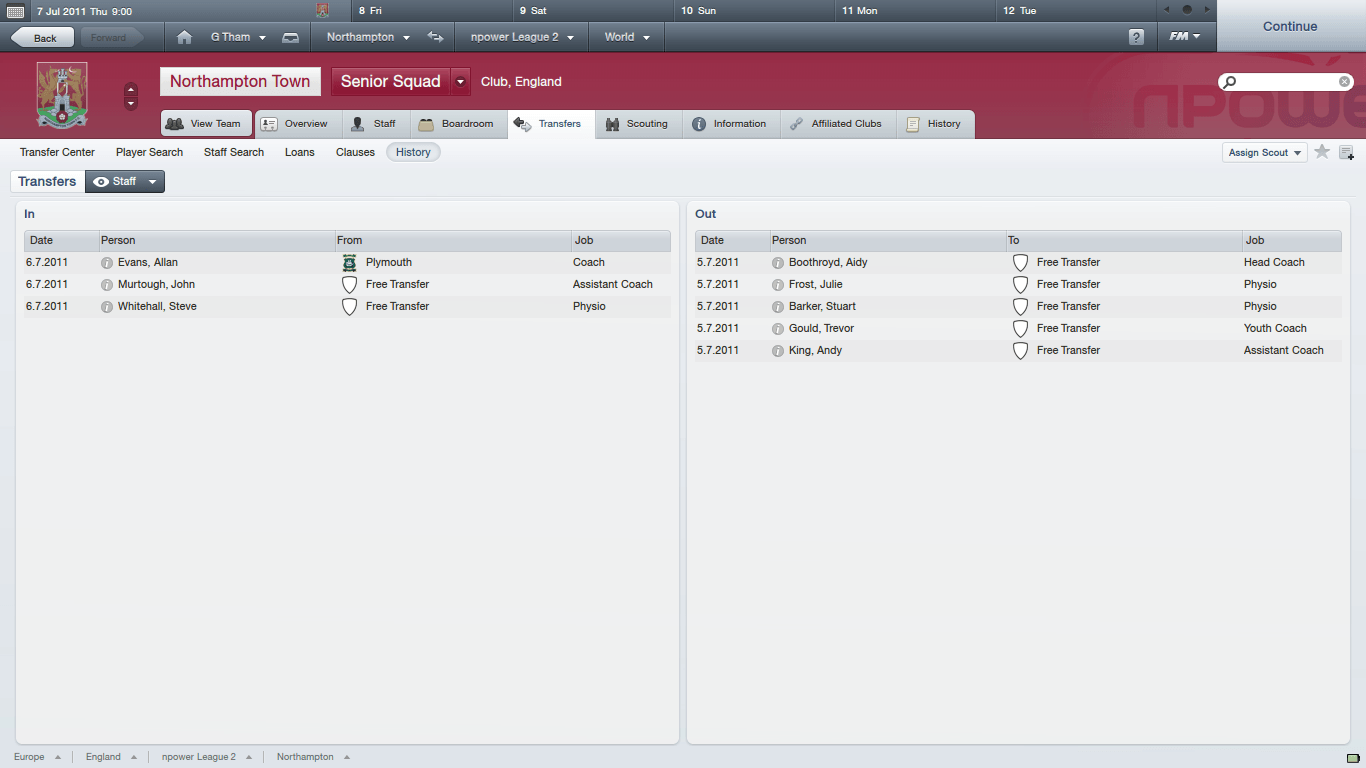 Glenn T
10 years
My first match as Northampton manager ended in an embarrassing 1-1 draw with my Reserves! Really embarrassing but maybe I can take that we haven't really had a formal team meeting yet as an excuse.
Login to Quote

barton6435
10 years
good detail, liking the storyline keep it up
Login to Quote

Glenn T
10 years
Transfers
I have brought in three fresh faces for Northampton and I am certain this players will do very well for the club. All are on free transfers so I didn't spend a penny. 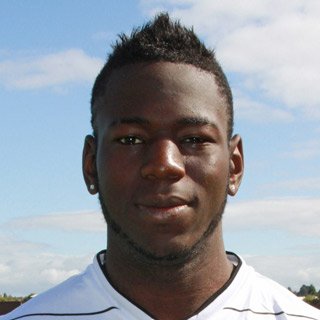 Released by Hereford, I've snapped the 19-year-old French defender on a free transfer. My coaches say he can become one of the best in the lower leagues and can probably deliver for higher leagues too like the Championship and the Premier League. Starting his career at AJ Auxuerre, he failed to establish himself in the youth team and dropped down a division to play with the youth team at Angers SCO in Ligue 2. Also failing to break into the starting line-up there, he moved to England and joined Hereford on a free transfer, and unfortunately also failed to establish himself nor make a single senior appearance for the club. He will be looking to change his fortunes at Northampton and I'm certain he'll become a big star here. 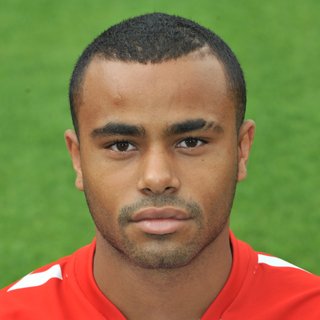 A young 20-year-old Irish striker, Adam is not rated very highly by my coaches but as long as he works hard I'm sure he can accomplish anything he wants at Northampton. Coming from the youth set-up at Barnsley and making only 3 senior appearances over a period of four years at the club, Barnsley finally released him and I managed to convince him to transfer to the club. A 31-year-old Spanish striker, Counago was released by Ipswich Town after an unsuccessful loan spell at Crystal Palace last season. He offers both experience and talent and will be a guaranteed first-teamer, well, until his form starts to dip, that is.

Transfers out
Seth Nana Ofori-Twumasi, a very talented right-back in my Reserves and probably the only talent in my entire Reserves + U18s, has been farmed out on loan to Macclesfield to gain first-team experience.
Login to Quote

Glenn T
10 years
We finally had our very first team meeting the day after the draw against the Reserves, in my rather small office, although as of now we had a small squad so it wasn't overcrowded but I'll probably have to find a bigger location for team meetings once I start expanding my squad. New recruits Adam, Kanoute, & Counago joined us. "It's wonderful to finally be able to meet you all in person," I said warmly. The Northampton squad didn't look tough to manage. They all didn't have big egos like the players in the Premier League. "Well, as you all know, there are sure to be some players in the squad signed by the manager before me that don't fit into my plans. Some of the players I'm thinking of selling have just arrived at the club, signed by Aidy, and these players I'll keep for a year or two at most, and then they're out. If you persist and attempt to stay at the club, you will not get enough or any playing time at all and if that happens don't blame me for that."

I paused as the Northampton players all nodded slowly, some had grim faces. I had expected someone to speak up, saying this was unfair treatment, but no, no one did. I was rather pleased with my first meeting with team, and when it ended, I had one-to-one chats with some of the more influential players in the squad to get to know them better.

It all went well and we are ready for our next friendly fixture, which is against Dunfermline Athletic, who play their football in the second tier of Scotland. 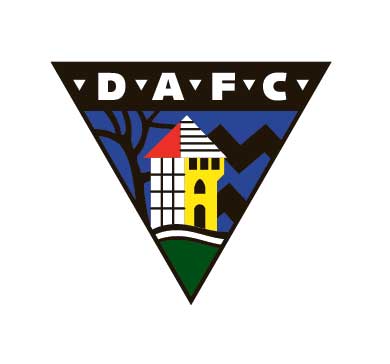 Kiwi
10 years
Get bored with Spurs Glenn??
Login to Quote

Glenn T
10 years
An average pre-season while we also lost 1-0 to Accrington Stanley on our first League 2 match of the season. 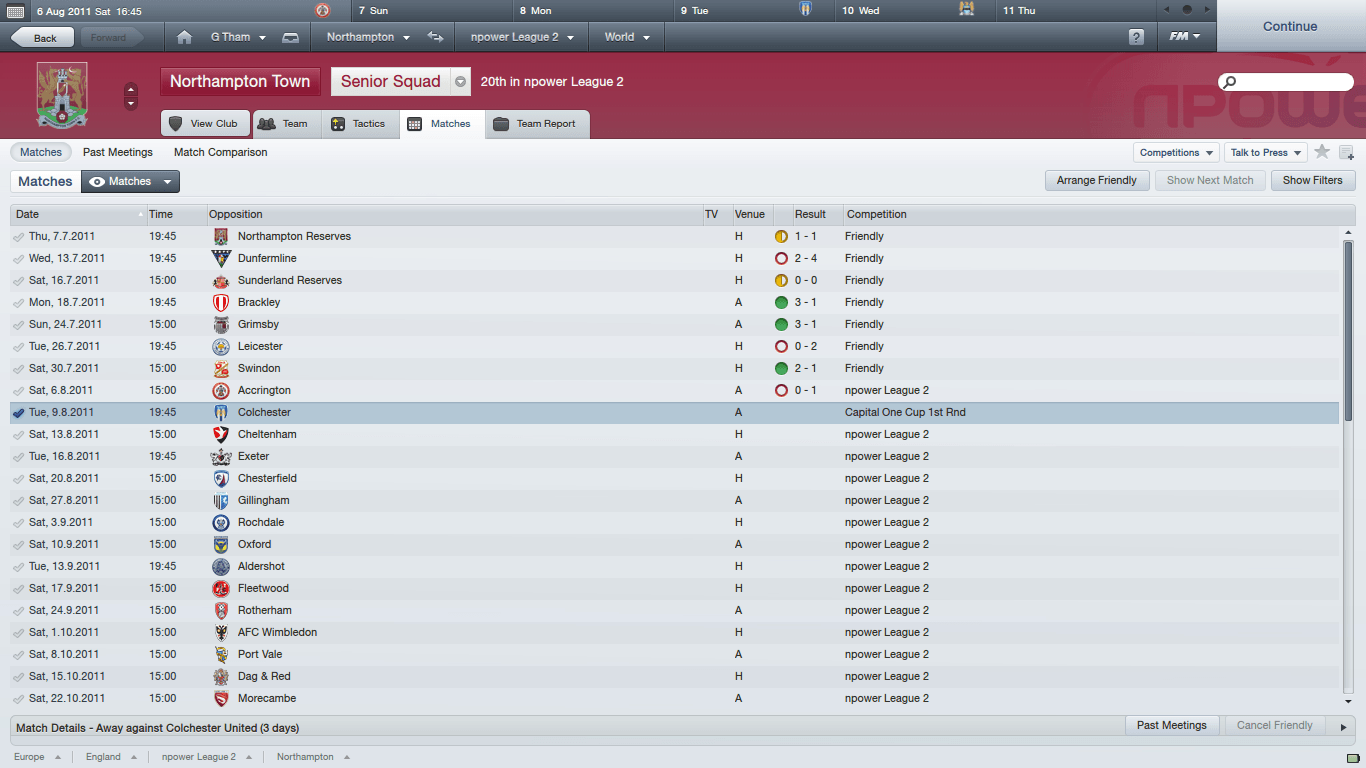 We have also announced a few new signings on free transfers. 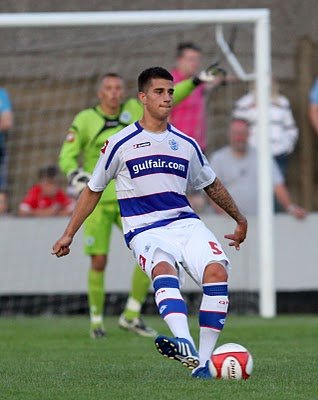 His former club Queens Park Rangers were so desperate to get rid of him that they were willing to let him go on a free. He might not have succeeded at QPR, but with a whole lot of lower league clubs chasing his signature, he chose to join us on a free and signed a long-term contract. The 19-year-old German defender at such a young age is already our best defender and is still improving, we have a real gem of a player here. 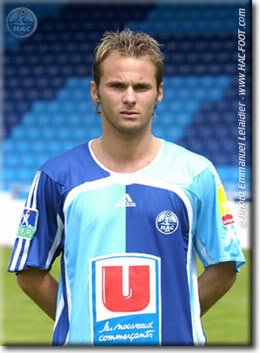 Brought in to be backup for the right winger position, Laurant is not such a good player now but promises to develop pretty well in time to come. Released by Kilmarnock after not making even one league appearance, Laurant comes from the Le Havre youth system and is as of now only 19 years old. 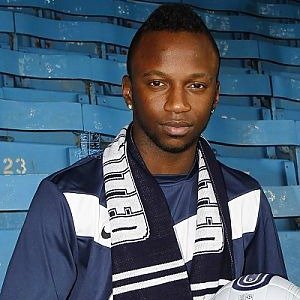 Johnson was released by Dover Athletic and had a number of clubs chasing him, as was the situation with Max Ehmer. However we successfully captured him and the 26-year-old winger will offer competition on the left. Known as a bit of a journeyman, Johnson came from the Manchester United youth academy and has played for Blackburn, Wolverhampton, MK Dons, Southend United, Dover Athletic and even went to Russia before to play for Lokomotiv Sofia. Although not the youngest, 31-year-old Carl Regan was released by Shrewsbury and linked up with Northampton on a free. He is the best natural right-back in my squad currently and is also a journeyman, having played for Everton, Barnsley, Hull City, DroyIsden, Chester City, Macclesfield Town, MK Dons, Bristol Rovers, and Shrewsbury.
Login to Quote

Glenn T
10 years
After failed contract negotiations with different unemployed scouts who wanted higher salaries than what I was prepared to offer, hearing that Scottish coach Ally Maxwell had accepted our offer of 350 per week to be the club's goalkeeping coach at least brought me some good news.
Login to Quote

Glenn T
10 years
A rather brilliant win against Colchester, who play their football in League One, in the first round of the League Cup, with my new signing Pablo Counago scoring the two goals to propel us to the second round. Glenn T
10 years
After overcoming Colchester we next face Sunderland who play in the Premier League. To win will be a tough ask and I would consider us outsiders for this one...
Login to Quote

You are reading "Northampton: Road to Glory".