The Leeds United board have rocked the Leeds fans by sacking the manager Simon Grayson, despite having a successful season. In a statement released by the club, the sacking was in no way cynical and the club felt it was time for a change and a fesh start.

"We have dismissed Mr Grayson due his unfulfilled promise that the club would launch a promotion assault last season. This was unsuccessful and we have decided we needed a manager that can meet his own aims. This dismissal was in no way cynical as the two parties (Grayson and the club) came to a mutual agreement to terminate his contract with the club. We said to him that we have opted for a fresh start with a new manager and Mr Grayson left in order to stabilise his position so to not have an unsettling effect on the team. We thank him very much for what he's done- especially regarding the return to the Championship- and wish him all the best for the future. He will always be welcome back at Elland Road"
Login to Quote

Ex-Leeds United and England centre-back Josh Townend has taken on the position of Leeds United manager. The 46-year-old from Pudsey made 718 appearances in a white shirt scoring 78 goals from 1982 to 2002. He was renowned for his reputation as a no-nonsense tough-tackling centre-half which invariably got him into trouble on a few occasions picking up 21 yellow cards and 3 red cards. He also had a reputation as a real gentleman on the pitch as well as off it, always helping his opponent back to his feet after a crunching tackle, staying with his opponent as they were stretchered off the pitch and making sure no one on the opposite team was left without a handshake at the end of the game, including the backroom staff and even ground staff on away games.

On the international stage, this fearless gentleman reputation followed him as he made 72 caps and scored 32 goals, smashing the record set for most goals by an egland defender, which previously stood at the 6 goals scored by Jack Charlton.
Login to Quote

Josh Townend has today completed his first day at Leeds United. The new arrived at Thorpe Arch this morning where he was greeted by his new assistant manager Glynn Snodin who then introduced Townend to the rest of his backroom staff. They all sat in his office for two hours to discuss tactics, potential signings and youth prospects.

He then had an hour break to meet the agent of Trinidadian left-back Jlloyd Samuel who was available as a free agent. a contract was agreed upon and the ex-Bolton man just needs to complete a medical at Thorpe Arch tomorrow morning.

He was then visited in his office by chairman Ken Bates. A very confident man given his popularity in this part of Yorkshire, he stated he expected the to reach the playoffs. He was pleasantly surprised when he heard Townend say he didn't just want to reach the playoffs, but to be promoted. After a statement of ambition, Bates laid his cards out on the table for the gaffer. He was going to entrust Townend with a £375,000 transfer budget with £185,000 a week to spend on wages, of which there was approximately £20,000 a week left for new meaning that Townend would either have to have his eye out for a bargain or sell before he could buy.

After lunch with his staff and the chairman, Townend hit the first dressing room at Thorpe Arch where he met his players for the first time. He outlined what he wanted from them in the coming , how he wanted them to play and what his draft starting XI was. He then called Paul Connolly, Aidy White and Tom Lees into his office for seperate private meetings to tell them that he expects them to leave the club during the transfer window- Paul Connolly will seek permanent employment elsewhere, whilst White and Lees will be looking for clubs to take them on loan for the year in order to gain some first team experience.

He stated he was particularly impressed by the likes of captain Jonny Howson, winger Robert Snodgrass and Ross McCormack who linked up beautifully in the training match which saw Howson pick out Snodgrass on the right with a spectacular ball over the top as the Scottish waltzed past Ben Parker and picked out Ross McCormack who finished off the move in style.
Login to Quote

Tom_BcFC
7 years
What happend to your old one?
Login to Quote

joshleedsfan
7 years
It was on my dad's laptop because mine was broken. And thanks TheDoctor. Its my favourite team so I decided to go for it
Login to Quote 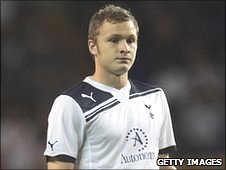 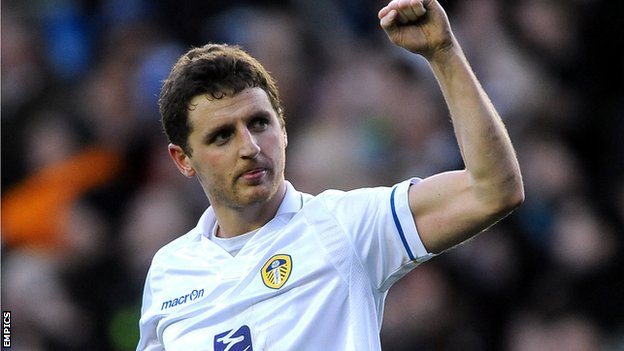 Leeds 3-1 Leeds Reserves
A that took us a while to get going against our own reserves after going 1-0 down to a Simon Lenighan strike. Second half goals from Snodgrass, McCormack and Nunez made sure we didn't literally embarass ourselves.

SK Brann 1-1 Leeds
Very even contest, nothing in it. Trialist Andreas Hinkel started before heading for the bench at . A mistake from loanee John Flanagan put us behind but McCormack popped up 10 minutes from time to bag an equaliser.

Sandefjord 1-2 Leeds
Game of two halves. Went behind on 25 minutes, before our routine switchover at half time replacing the entire starting XI. McCormack and Nunez it for us in the last 10 minutes. Signed Hinkel on permanently afterwards

Truro 0-3 Leeds
Made it look too easy at first goals from McCormack on 8 minutes and Majstorovic on 25 put us 2-0 up. Brown added a third in the second half before getting sent off. Vayrynen missed a penalty.

Bodmin 0-4 Leeds
Put a non-league team fully in their place. Nunez after 20 seconds to make it 1-0. Snodgrass scored in the opening seconds of the second half to make it 2-0 before adding another on 64 minutes. Daanny Pugh scored on 50 minutes to make it 3-0.

Guiseley 1-5 Leeds
Another satisfactory result with youth proving their worth whilst the first team rested for the home friendly the day after. Lenighan bagged a brace, Poleon and Taylor one each before Jacob Giles stuck it in his own net to put us 5-1 up.

Leeds 3-3 Zulte Waregem
Clinched a draw despite selection cock-up of the century as I accidentally put Lonergan on the wing in the first half by which time we were being battered 3-1 with Lenighan grabbing us a consolation in that first half. Brought out first team for second half in which Ross McCormack and Daniel Majstorovic sparing our blushes by making it 3-2 then 3-3. Second half very encouraging.
Login to Quote

joshleedsfan
7 years
FUCK SAKE!!!! MY LAPTOP DECIDED IT WOULD RESTART WHEN I HADN'T SAVED MY GAME SO I'VE LOST ALL MY PROGESS ON THIS SAVE. WILL BE BACK, JUST NEED TO EDIT EARLIER POSTS AS I WILL TAKE CHARGE OF LEEDS AGAIN BUT I'M SOOOOO PISSED OFF RIGHT NOW!!!!!!!!!!
Login to Quote

joshleedsfan
7 years
PLEASE NOTE: THIS SAVE HAS BEEN AN UTTER DISASTER DUE TO TECHNICAL ISSUES. SO I'M GOING TO SACK IT AND START UNEMPLOYED THEN TRY TO GET THE LEEDS JOB IF THE MANAGER GETS SACKED. SO FROM NOW ON, THIS IS A DIFFERENT SAVE. SORRY FOR ANY INCONVENIENCE CAUSED
Login to Quote

joshleedsfan
7 years
For the new story, head over to Leeds United- The future's all white
Login to Quote

You are reading "Leeds United- Movin' on up".