With the sudden departure of David Moyes from Everton after an alleged falling out with the board Jim Hammond was shocked to find a letter in the post. It was asking for him to come in for an interview. Jim had only had non-leauge managerial roles and he had only been assistant manager of Bury for 6 months. He thought it was a joke, but he soon found out it wasn't.

Jim Hammond took a deep breath, raised his hand and knocked on the door of Bill Kenwright's office door. He was hit with a surprise, there were many people in the room. They were the Everton Board members, Jim was startled.

"Ah James! I am very happy to meet you, do please take a seat." said the chairman, Bill Kenwright. "Now, I am sure you are very excited to be here, and so are we. You are one of the picks of young coaches out there, and we know of your successes. Leading St. Albans to the Evo-Stik Southern title by winning every match was certainly impressive."

"Yes, now if you don't mind, we will ask you a few questions."

"Great, now, why should we hire you even though you have no managerial experience at a high level?"

"Well, Mr Kenwright, I would like to say that not everything comes with experience. Just look at people like Mark Hughes, he has experience, but yet my 3 year old son would make a better manager. I have what you need, I have proven I know my way around tactics, with St. Albans."

"Ok thank you James, we have run out of time.We'll be in touch."

Jim made his way out of the office with a million things buzzing in his head. Did he sound confident? Was his reason good? He was bricking it, and he had finished the interview!

Well there you go! My first post on my new story, hopefully this will go well! I plan to run this story out like my Arsenal one on fm12, but with more focus on the story, and the matches set out better.

Hopefully you guys will enjoy it!

Jim Hammond was doing what he did pretty much every Saturday, watching the quality show that is Soccer A.M. Tubes was being his hilarious self.

Just as the highlight of the show was coming on (Frankie's Away days) Jim's phone started to ring. He was tempted to just leave it but he forced himself to get up and answer it.

"Hello James, this is Bill Kenwright, I have some news you may be interested to hear. The board have made our decision. We are going to give you a go. However we will only be offering you a one year contract to start, so you need to prove you deserve to be the manager in the long run."

"Oh my god! Thank you so much Bill. I will give all my effort on this! When do you want me in?

"8:00am on Monday at the training ground please James, I look forward to seeing you."

Jim couldn't believe his luck, he had finally met his aspirations of becoming a football manager in the Best League in the world. Well, he had at least for a while.

And so, the Legend that is Jim Hammond got his big break.

As Jim drove up the drive to Finch Farm he took a double take. He still couldn't believe that he had been given such a prestigious job. The facilities at Everton were amazing and Jim was very impressed.

As he got out of the car he was met by Steve Round, the assistant manager of Everton.

"Hello there Mr Hammond, I am Steve Round, I will be your assistant manager. I'm glad to meet you."

"Now would you like to follow and I will give you a tour of the facilities here."

Jim continued to be impressed with the facilities, especially the pitches. So much was racing through his mind. He already had a list of players he wanted to sign and he was very keen on this one brazilian chap. 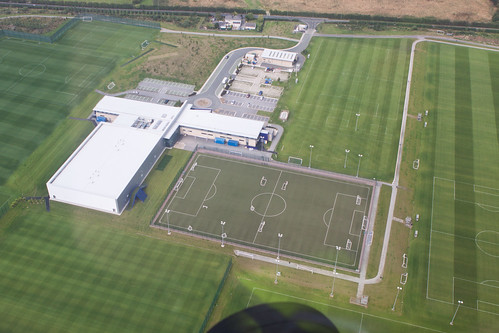 The moment Jim had been nervous about was fast approaching; meeting the players. Jim was standing in the main room on the 1st floor of the main building, waiting for the players to arrive. Gradually they all entered. The last of them was Victor Anichebe, he looked like he had been awake for about 10 minutes when he arrived. When they all finally had arrived the Chairman started to talk, but Jim wasn't listening, he was completely zoned out, he was terrified. What if the players didn't like him? What if he looked like an idiot? What if...

"Oh yeah sorry," Jim replied. As he made his way to the middle of the room he heard the players chuckling amongst themselves. He was worried he had made a bad impression. He thought to himself, do or die.

"Right guys, If you don't know me, which I suspect is the case, I am James Hammond. Now if you want trophies, I can tell you we don't have much money. But what I do have is a very particular set of skills; skills I have acquired over a short career of coaching. Skills that make me a dream for people like you. If you accept me as manager and respect me, that'll be the great. I will not fine I will not drop you. But if you don't, I will look for you, I will fine you, and I will drop you into the U21's. Thank you. And with the cheesy film quotes out of the way lets get down to it and lets win some trophies!"

Jim was met with a round of applause and numerous cheers by the team, he was relieved.

Right Guys, I hope you got( and liked) my Taken reference. I will try and intend to make this story very interesting and a good story, but I want it to be amusing.

Kiwi
8 years
What are your targets for the year? Mid table finish? Top four?
Login to Quote

on the game I told the board but I actually want to finish in the top 5 so I get some sort of european football. I did this so if balls it up I don't get sacked

It was the second day of Jim's job at Everton. He was going to hold his first training session and then hold a press conference.

Jim kicked off training with laps around the pitch. However they each had separate amounts to do. These were the rules:

Surprisingly, Tim Howard was the best. Not surprisingly though, Victor Anichebe was the slowest. After the warm up the team did the usual, tried and tested drills.

After the training session Jim went and got changed into his suit, ready for the press conference. As Jim made his way to his seat in the press office he was stunned at how many journalists were in the room. The room was full! Jim sat down and said,

"So, who wants to ask a question?"

"So Mr Hammond, are you excited about managing Everton?"

"No I'm very annoyed about getting the job, next question please."

"Who are you looking forward to playing the most and why?"

"Well, that's quite simple, it has to be Qpr, they have the worst manager in the world. I'm going to enjoy beating them."

"Is there going to be a certain philosophy you are going to adapt whilst managing Everton?"

"Yes, yes there is. I am going to have to buy young and cheap because I have next to no funds available to spend. This means that I will have to use what we already have. We have some players here who are most definitely Champions League standard. I intend to bring in more."

"As Everton being nicknamed the toffees, do you like toffee?"

"No I hate it, now I think that's all we've got time for, thanks for coming."

After what could possibly the shortest press conference ever, Jim left, happy with the way he answered the questions.

Love a bit of clarence park
Login to Quote

Jim had to get down to the nitty gritty stuff now, he had been in charge for a week and had settled in quickly.

He decided to start devising his tactics. His priority was to make sure the team wasn't shipping in constant goals. His philosophy was: If you concede 5 goals in a game you can play excellently on the attacking front, score 4, and lose. This may appear negative, but it is true. You cannot win trophies with a team who can't defend.

Trust me guys this may not look much, but it's really good.

With just one game left of pre-season to go Jim still hadn't made any signings, he had spent night and day looking for someone who was exceptional, and he could afford.

He finally found his man;

Wellington Nem
Jim had watched him play many times in the Ligo do Brazil and he had been impressed each time. His playmaking abilities were exceptional for someone who was only 20. The best part however was that he had a release clause of just £3.5m. That would be a bargain.

After numerous phone calls Jim finally got through to the Fluminese chairman.

"Hello, this is James Hammond, manager of Everton F.C. I want to buy Wellington Nem."

"Ok, fine, Wellington will be on the next flight to Liverpool then."

Jim was very surprised as to how easily that went. He was very happy it had been done quickly. It was up to higher powers in the club to finalise the transfer now.

You are reading "Everton - Tasty Toffee.".