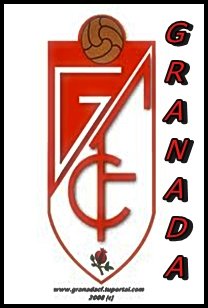 Juan Antonio Anquela on the way out!

Breaking news coming down from the city of Sevilla, as Granada head coach Juan Antonio Anquela has been fired by the board, despite a serie of good performances in the past season. To spicen up the news, past english international Daniel Clarke has been hired to take over his reign. Daniel Clarke's player career had him playing at several clubs, including Bradford City, Southampton, and finally Tottenham Hotspurs.

Clarke's career has come off short, after a brutal injury sustained in a clash against Gravesen, in a match of international level. Gravesen has broken his leg in a fierceful tackle, which has cost Clarke his career.

Clarke will be, apparently on a wage of 17500$ per week. Our sources say that Granada is in a good financial position, and, in spite of that, Clarke will not have any transfer funds to work with.


"Manuel Lucena is on his way out!
[Reporter] Mister Clarke, what do you think about this new job you have been granted? Are you enthused of it?
[Clarke] I am delighted, and happy that the chairman has offered me the job.
[Reporter] I see. How do you find the conditions here, on Nuevo Los Carmenes?
[Clarke] Incredible. The training facilities are a wonder, but I did not expect anything less.

Clarke nods firmly, before he points over to a reporter in the back of the conference room.

[Reporter] Mister Clarke, rumours have that you are looking to transfer Granada icon, and at the same time, captain, Manuel Lucena. Is this true? How much will this affect the fans?
[Clarke] The rumours are true. Manuel Lucena is past his peak, and cannot, unfortunately, keep performing at such a level. Due to the wage budget restrictions, I am forced to take financial action. I will try to hold onto him, and, even though I expect incuring the wrath of the fans, I will have to take this risk.
[Reporter] I see.., what about the tactical department? Is there any formation "written in stone"?
[Clarke] Actually, I have already thought about the tactics. If you look onto the plasma panel to my left, you can see what our first eleven and formation look like, including the players that are in my plans. 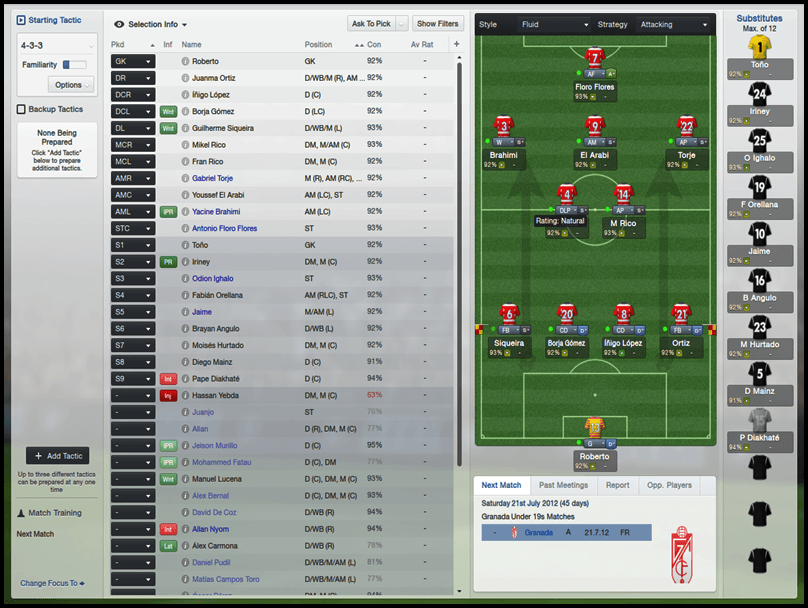 [Clarke] Now, we must bring this to an end. I must focus onto my team.

*Clarke would dust out of the room, holding an envelope, along with a cubanese cigar in his spare hand*
Login to Quote

AlexSonwild
10 years
Nice start m8, I will be following

Kane
10 years
Good luck, will be following :)
Login to Quote 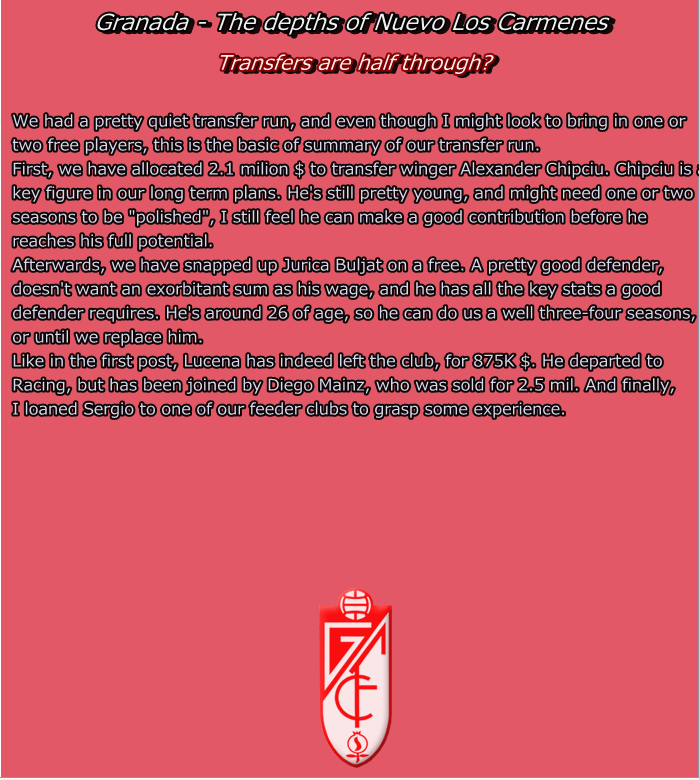 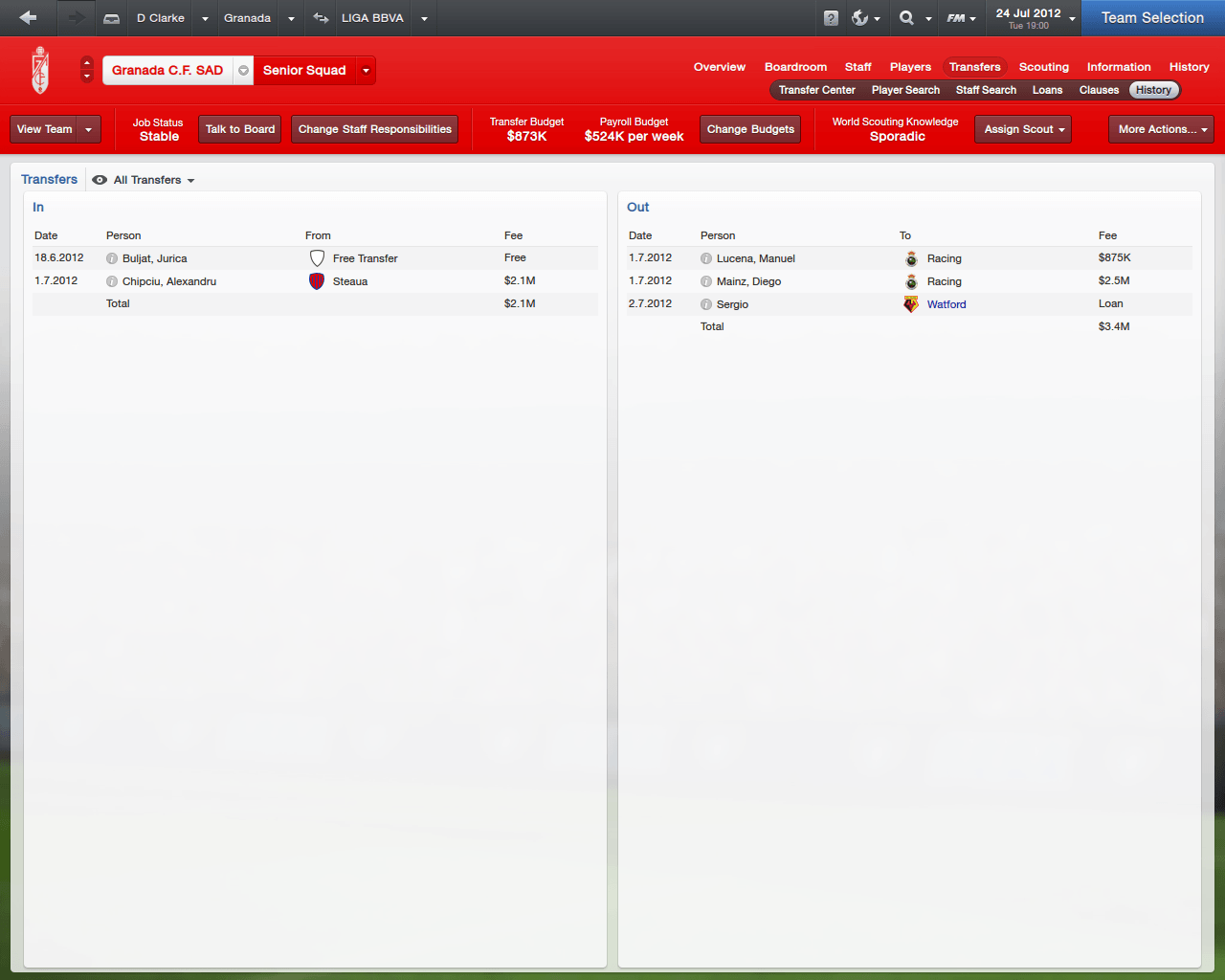 shylax
10 years
From my experience with Numancia, Granada are the jobbers of La Liga, it'll be interesting to see if you can get them to respectability.
Login to Quote 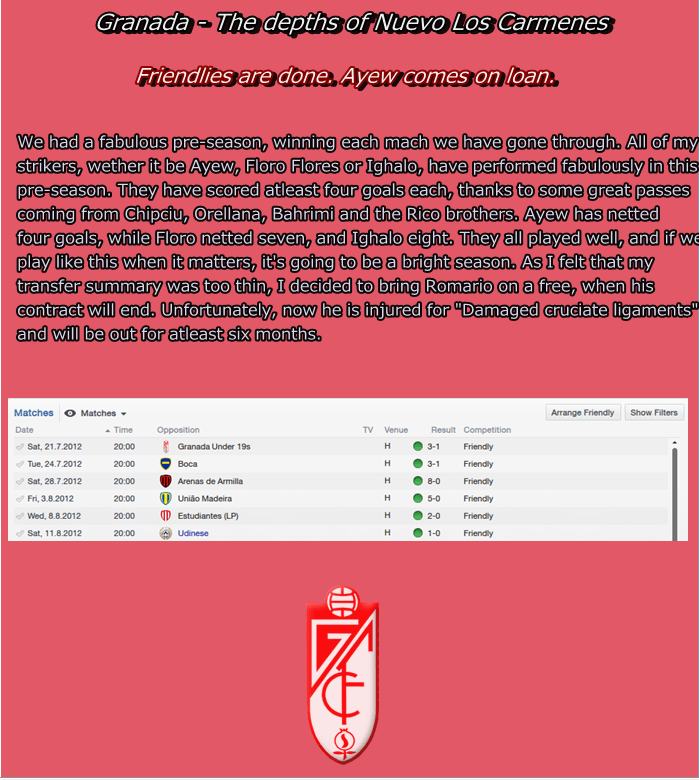 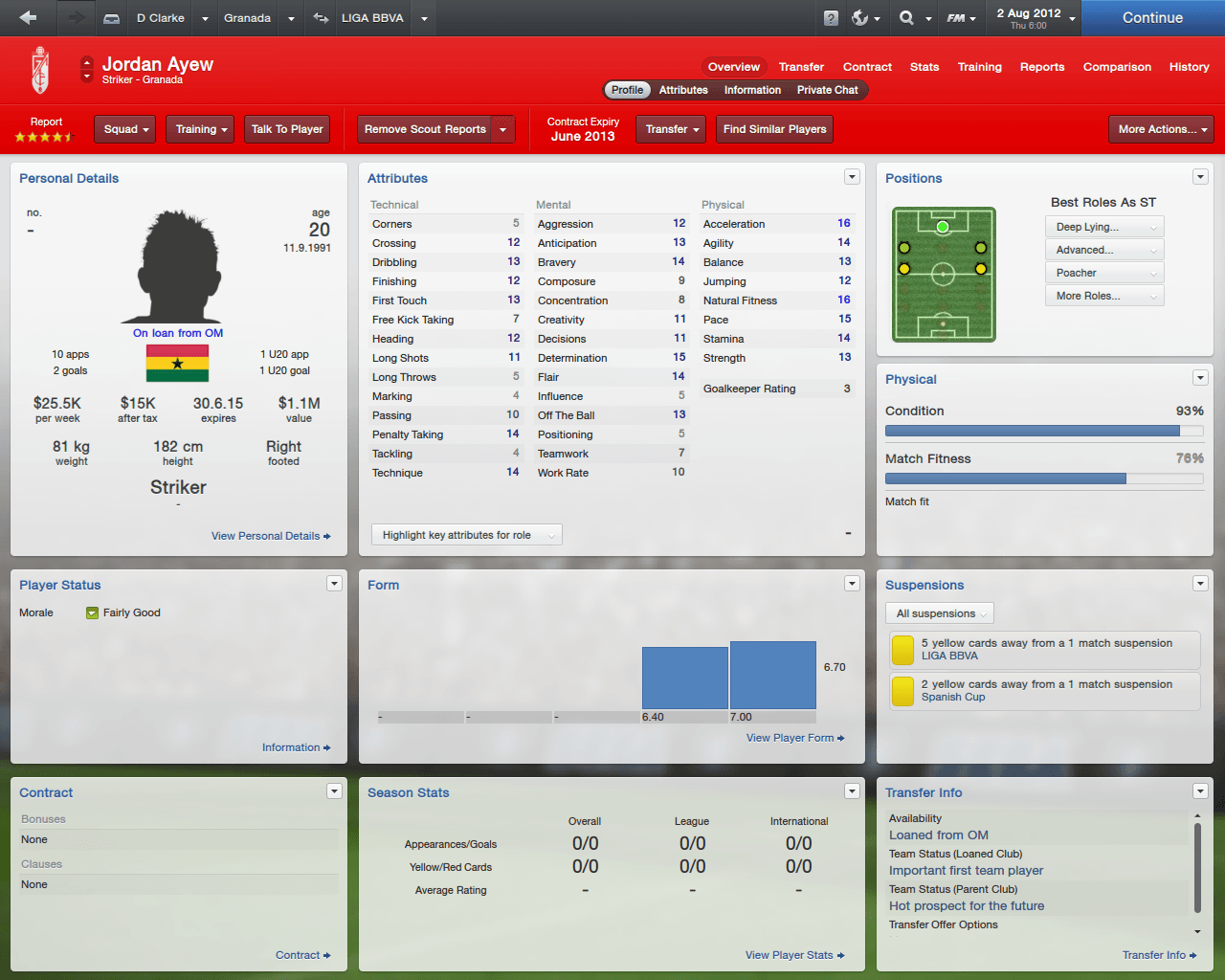 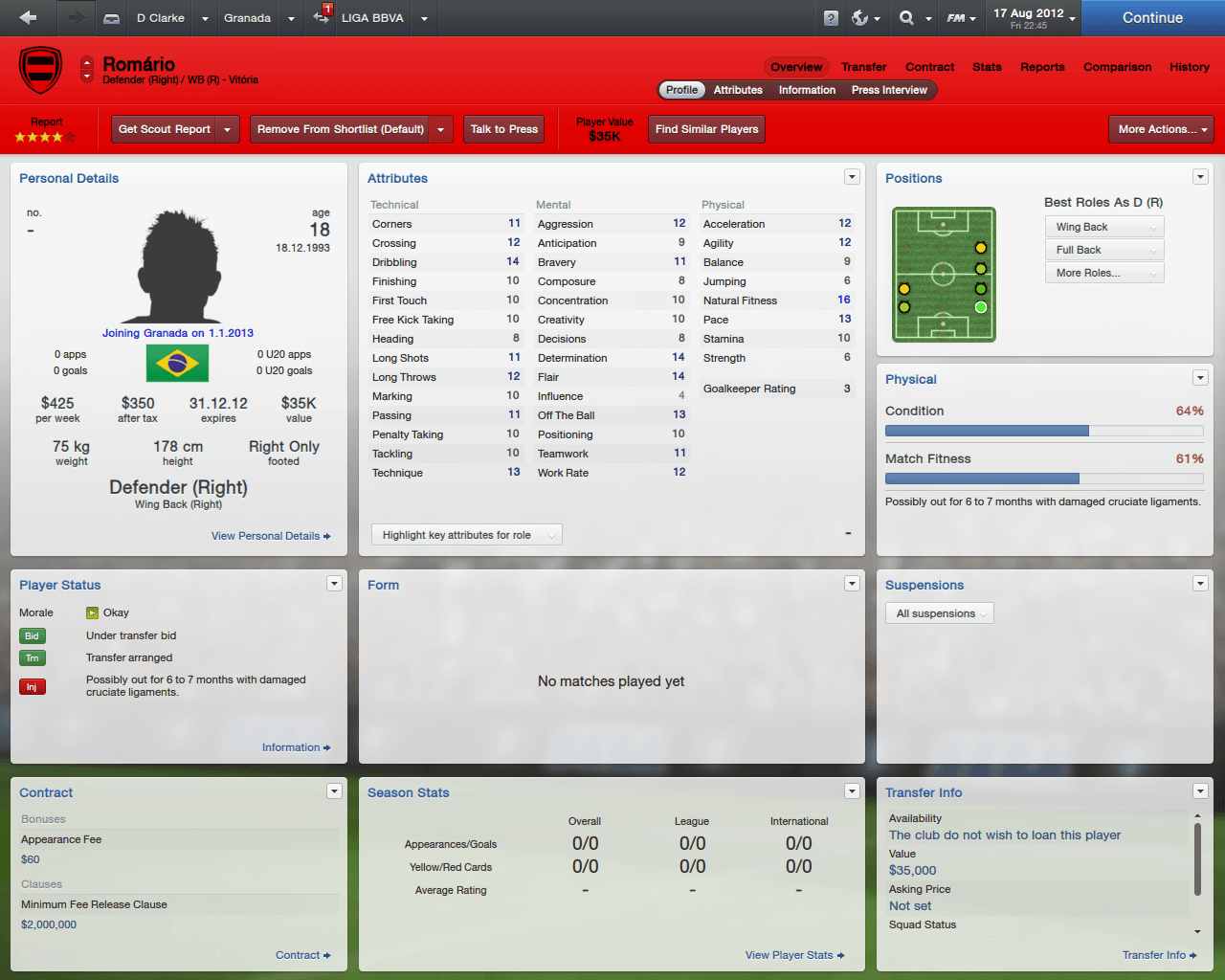 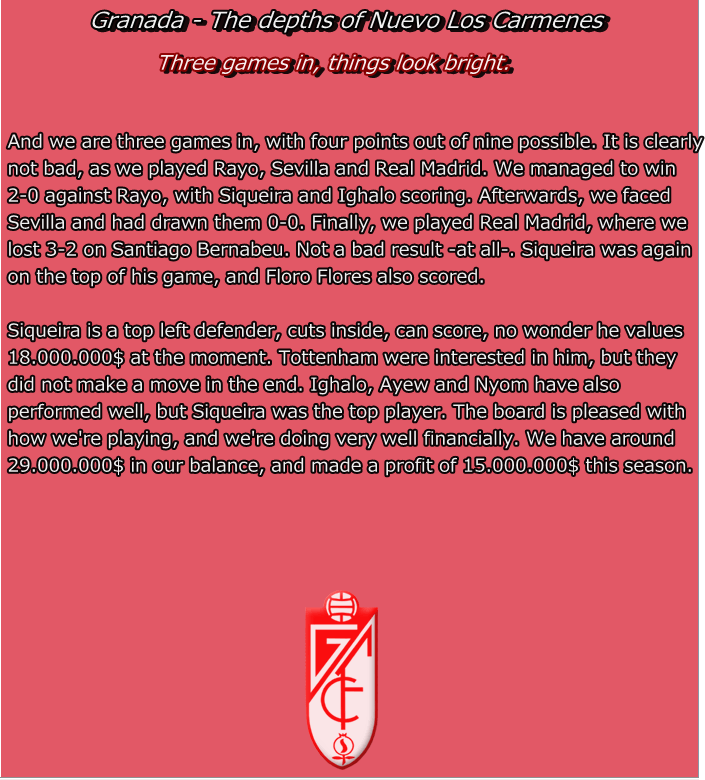 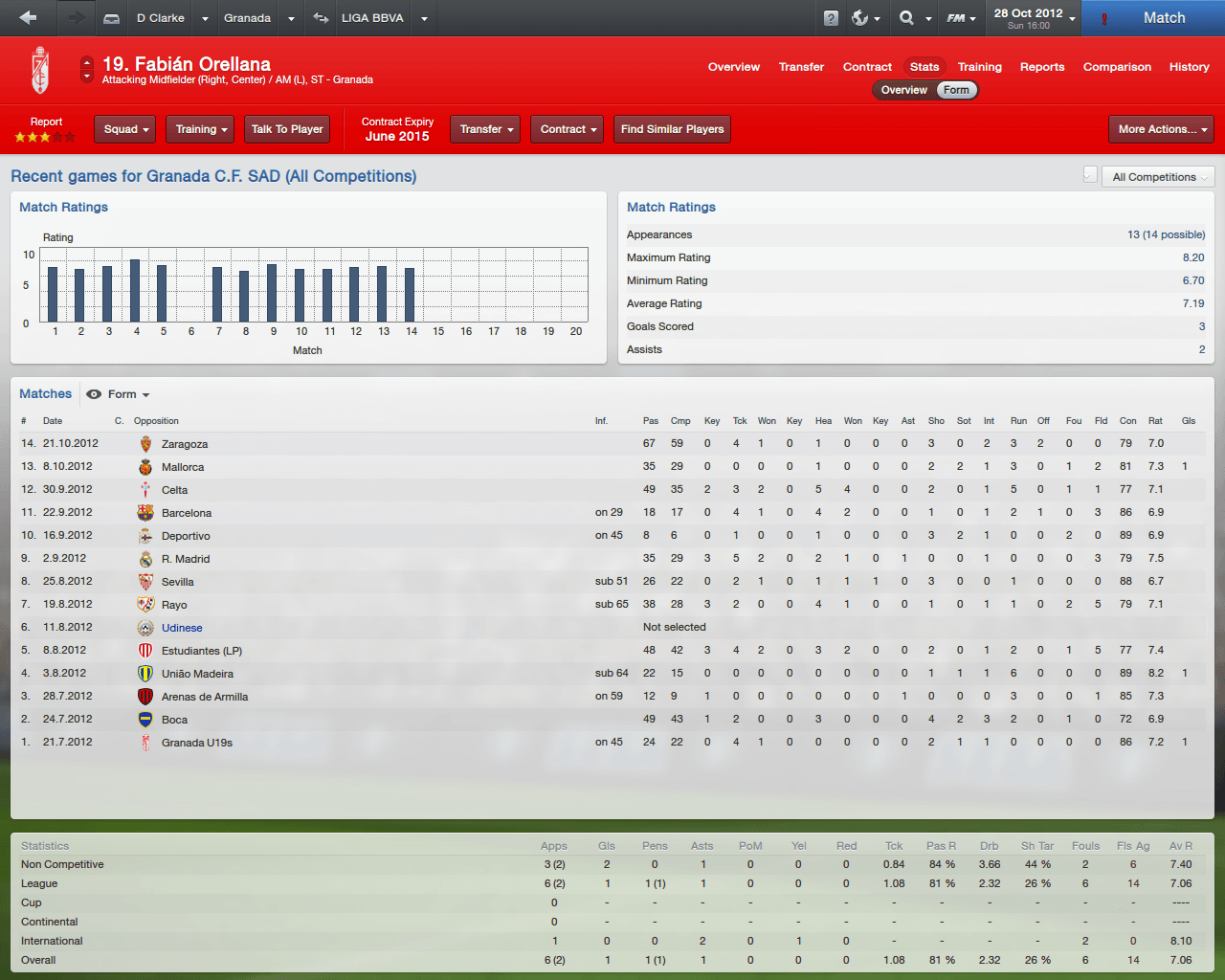 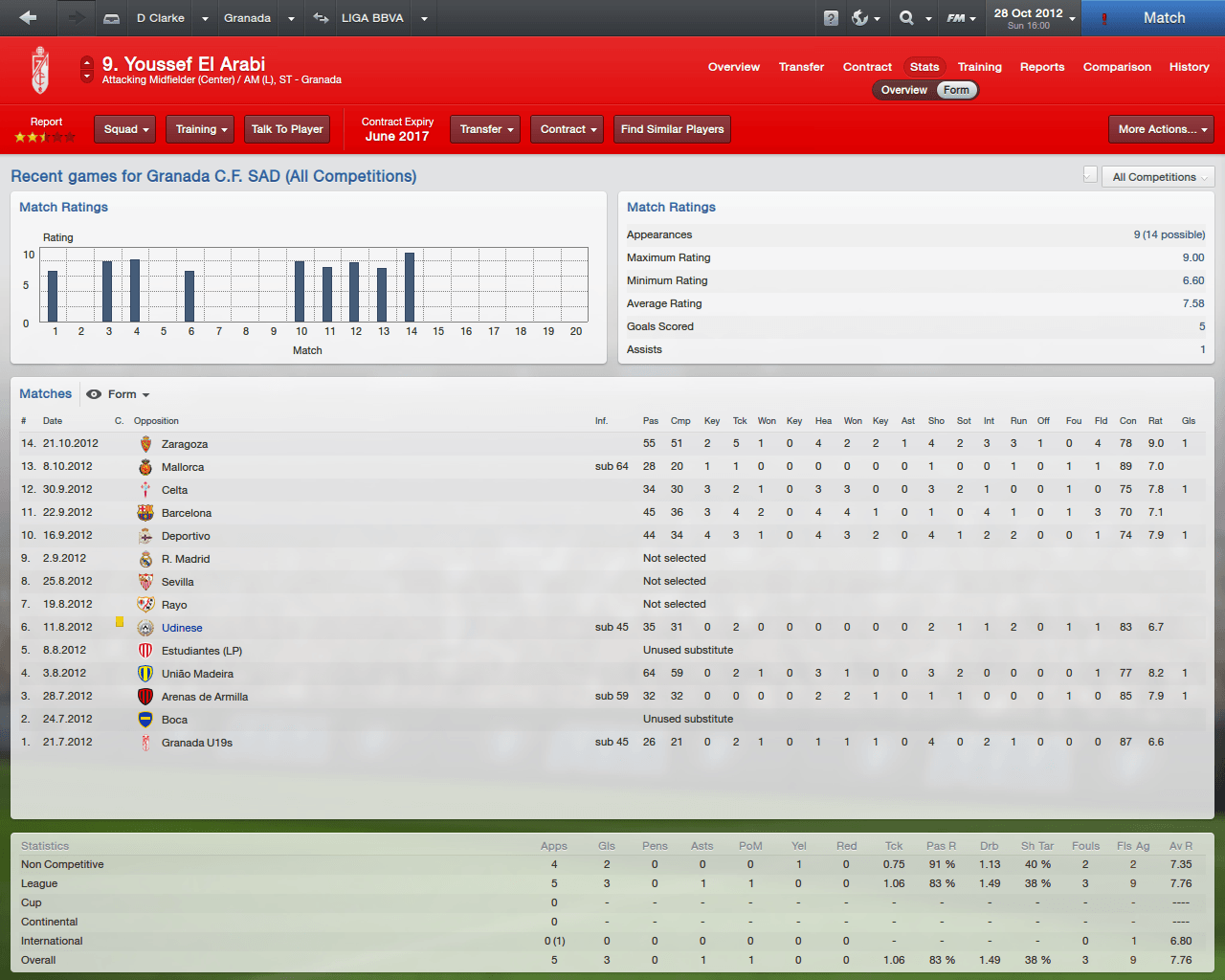 crisrko
10 years
Granada proud with their new headcoach. My 4-3-3 works WONDERS on Granada, as their team has alot of pace, and pretty good crossers and strikers. 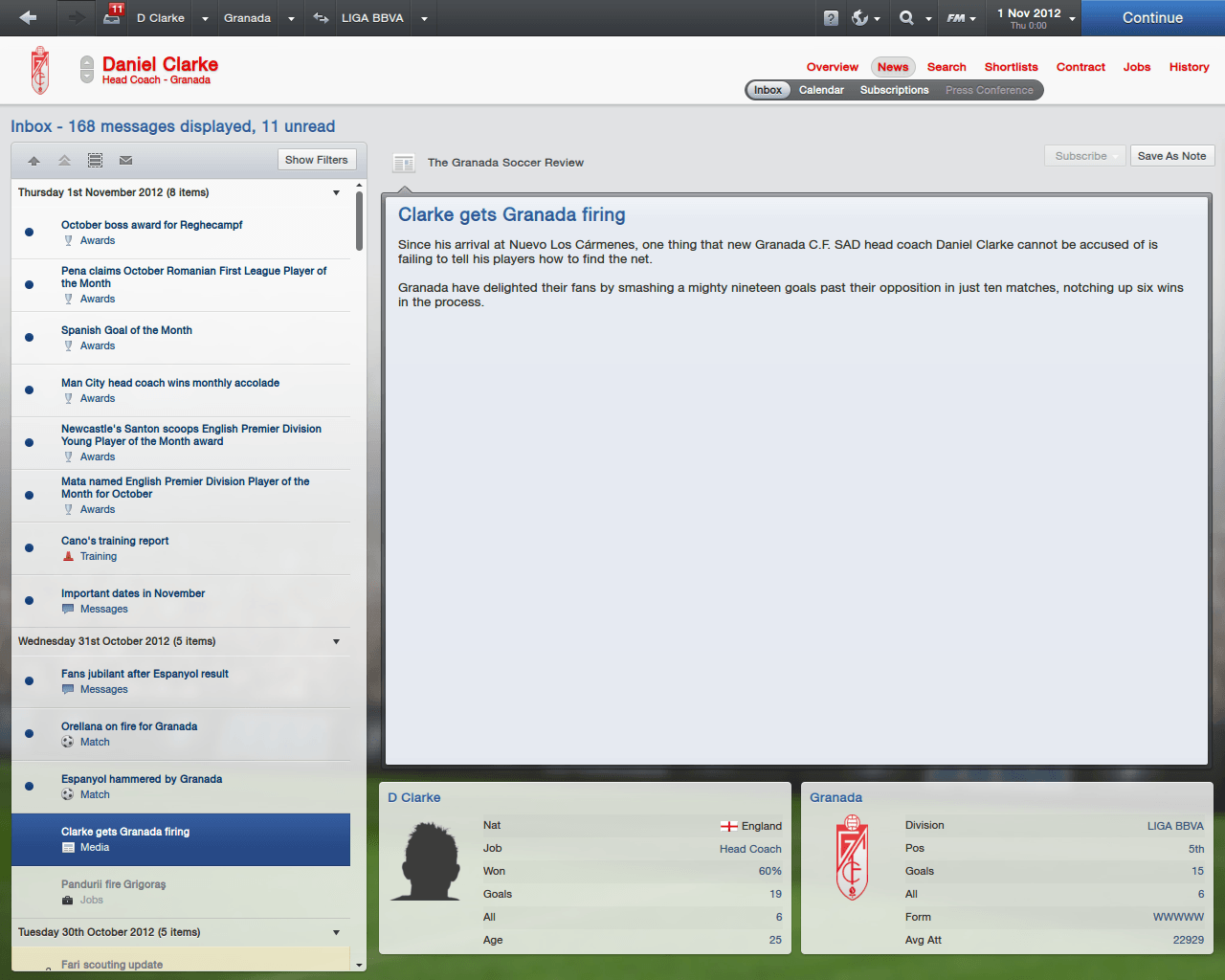 Orichieva
10 years
I am liking this story so far mate. Good approach and nice layout. Good luck for the season.
Login to Quote 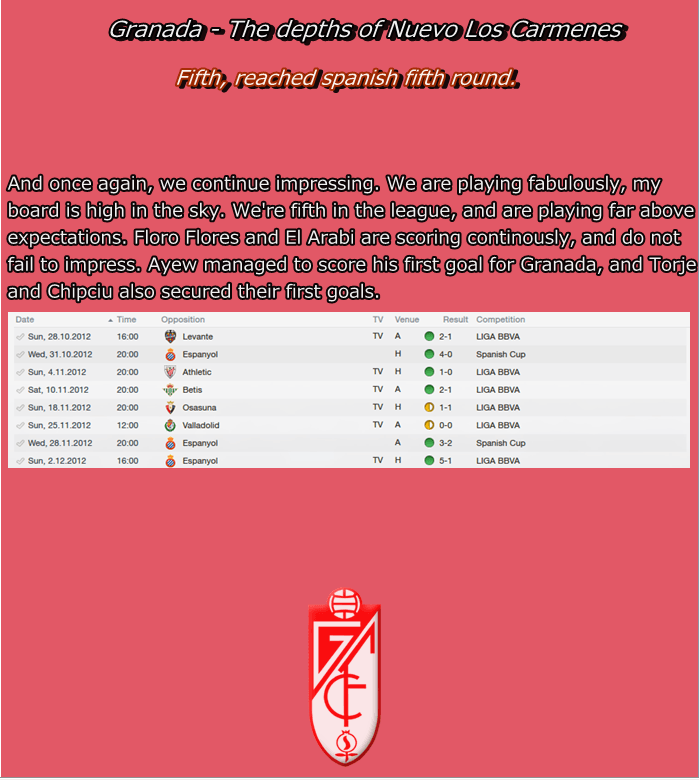 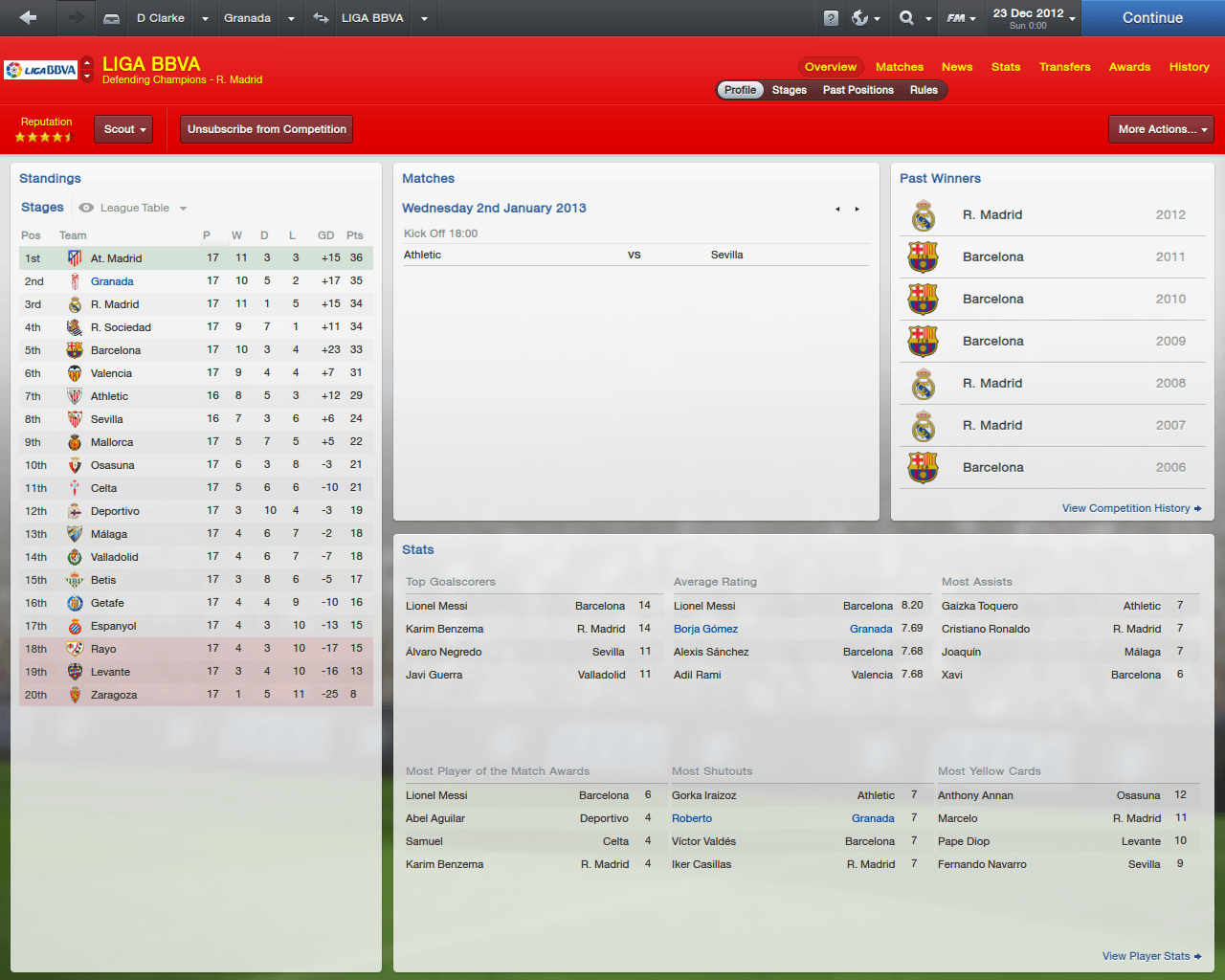 np66uh
10 years
Hi my friend can you put a pic from the training method?you are playing in a great league

You are reading "The depths of Nuevo Los Carmenes".