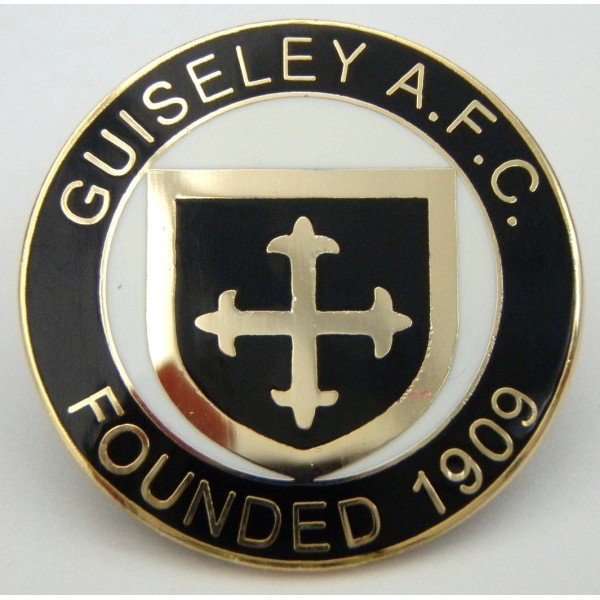 Guiseley’s board have today surprised Guiseley fans by sacking manager Steve Kittrick. In an official statement on the teams’ website, the Chairman, Ian Brown stated that, “Steve had promised promotion last season from the Blue Square North to the Premier division. An agreement on his contract was in place that if he failed to do so, he would leave the club without compensation. Unfortunately, we have been placed in this strange position and had to make a choice.We will be looking towards future candidates.” Nothing more has been announced.
Login to Quote

Today Sky Sports has learned that in experienced manager, Hugh Keenan, has been placed at the helm of the Guiseley. Ian Brown, Guiseleys’ Chairman, has announced, “Today we have beside me Hugh Keenan, Guiseleys’ new manager. We are aware of his lack of experience but his football management simulation speaks for itself. His Football Manager achievements are great and he has dedicated most of his time to his role at each club. He has youth on his side being only 25 and that alone should bring fresh ideas.” Hugh announced he will meet the press in the coming days.


Keenan: Thank you all for attending today, I am delighted to have joined Guiseley. I am looking forward to the future with this club.
Press: Doesn’t your lack of real experience put you off?
Keenan: No, not at all. I feel that I will quickly learn the ropes and lead this team to glory.
Press: Realistically, how far do you think you can go?
Keenan: How long is a piece of string?
Press: Do you have an idea of what players will stay and go, and will you be making tranfers?
Keenan: I have a fair idea, but I will be putting players through the paces to see who is up for the challenge. And yes, it is something I will be doing, although there are no choices made as of yet. I think that is all for today guys, once again, Thanks for coming.
Login to Quote


Keenan: Thanks boss for taking the time to meet with me, I appreciate it.
Brown: No problem Hugh, now down to business. It’s great to have you here at the club, and we are looking forward to a bright future.
Keenan: Yes, me also and thanks for this chance to prove myself with Guiseley.
Brown: What are you ambitions for this season? We would love promotion.
Keenan: I feel that I can win this league for you and the fans boss.
Brown: Great! Well I will set up the club meetings with Chris and the staff we have. Best of luck.
Keenan: Thanks again boss, see you soon.
Login to Quote

looking forward to it
1
Login to Quote 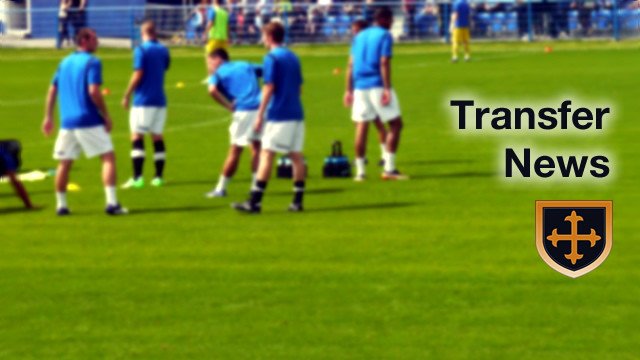 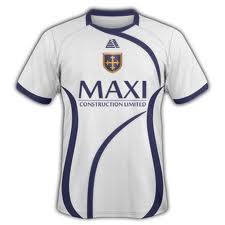 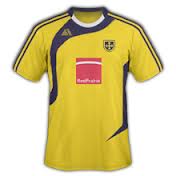 Founded in 1909 by a local group of enthusiasts, the club’s first success came in 1913 when they won the local Wharfedale League. Following the end of the First World War the club switched to the Leeds League, achieving little until 1924 when another switch, to the West Riding County Amateur League, eventually brought success. A treble of league championships followed in the 1930s as well as two appearances in the last 16 of the old FA Amateur Cup, against South Bank in 1932 and Cambridge Town (now City) in 1934.

Higher status was gained in 1968 with the club entering the Yorkshire League, and after moderate success the Division Two championship was won in 1976. Promotion to the First Division followed, with runners-up position achieved in 1980 along with a League Cup success over champions Emley. Success also arrived in the West Riding County Cup with a hat-trick of trophies won in 1979-80-81. 1981 also saw the club’s first taste of FA Vase mania, Guiseley reaching the quarter-finals before losing at home to eventual finalists Willenhall Town.

2011- 2012 was a successful season with the team finishing as runners-up in the Blue Square Bet North, its highest ever league position, but it was followed by another play-off defeat, this time to eventual winners Nuneaton Town.
Login to Quote

Orichieva
8 years
Thanks Mark and Blue, I will be adding the player profiles soon and then the August update.
Login to Quote 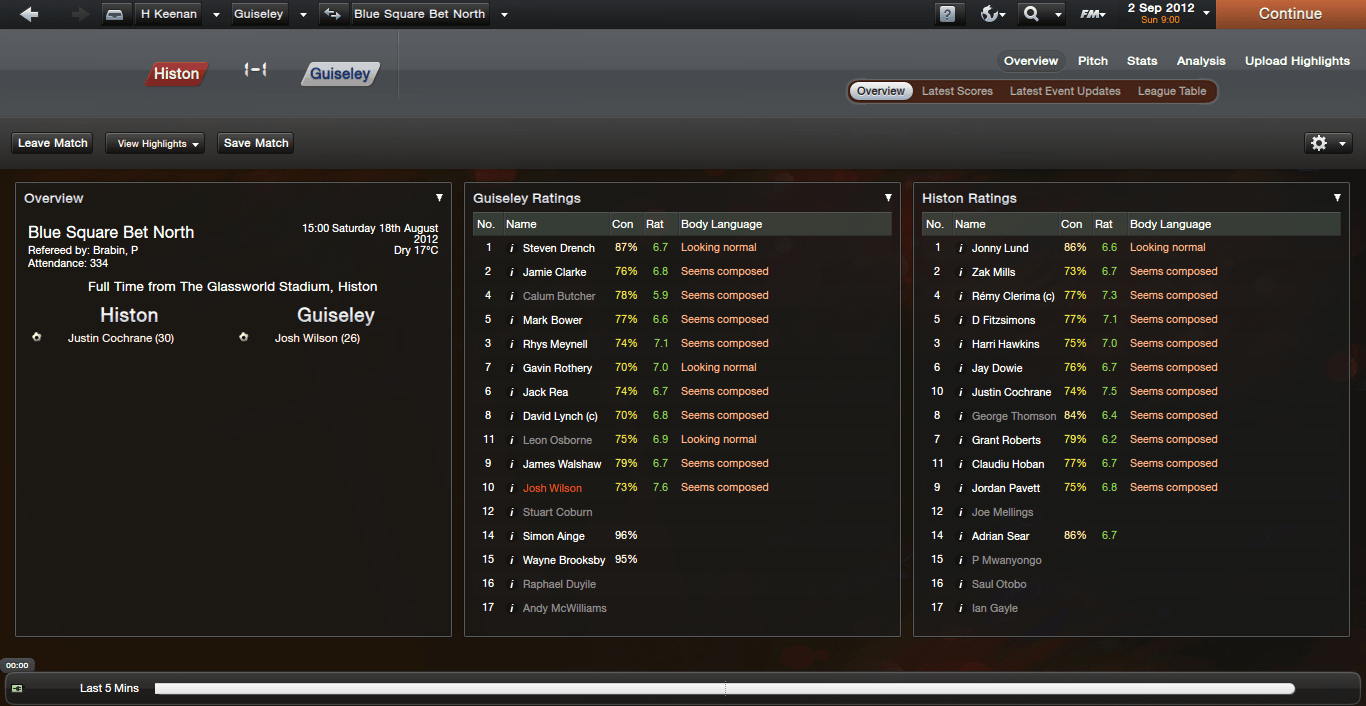 So we started out well, controlling the game to begin with and scoring the first goal. It only took six minutes though for all that to change, with that I knew it was going to be a tough season. I remained calm with the guys and told them that they were unlucky with the result. Most of them reacted well and we looked towards the next match. 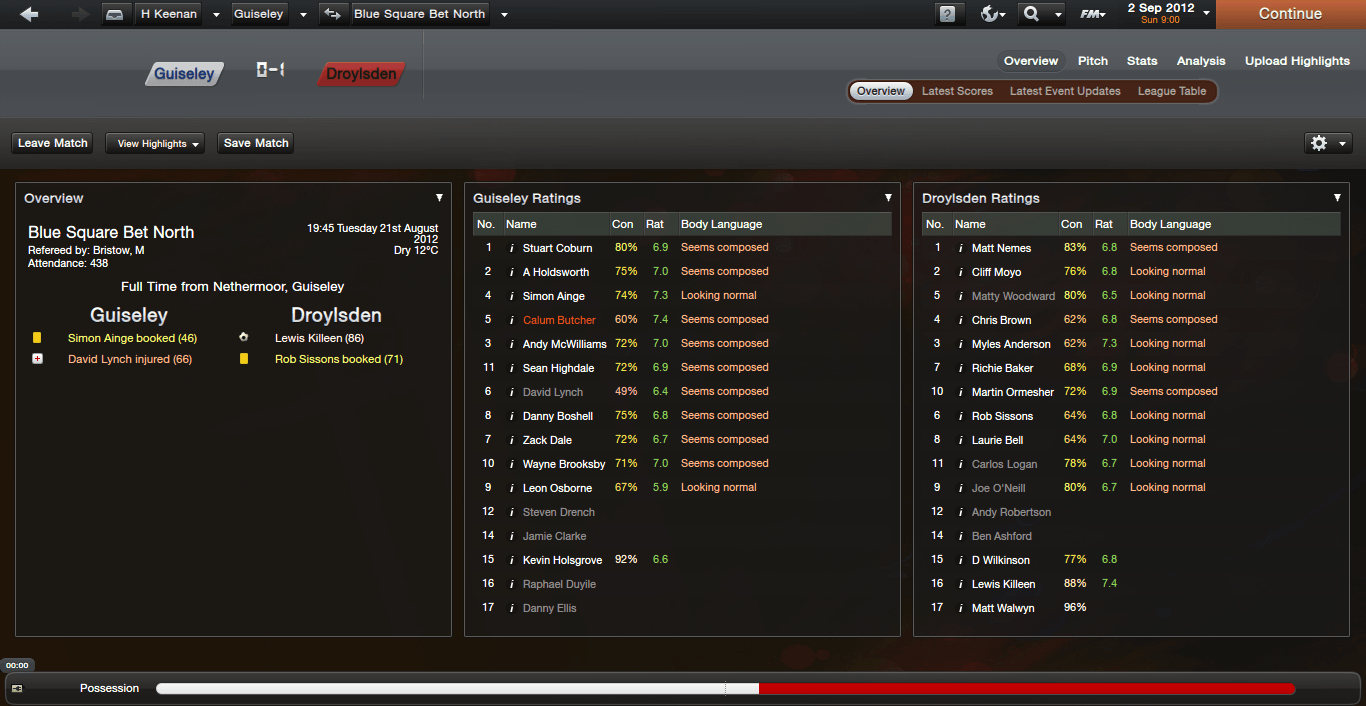 We never looked comfortable in attack. Despite controlling the game and playing ok, we lost the game in the final 10 minutes were Droylsden just controlled their final third. They finally scored and I just couldn’t fight back. I told the guys I was unhappy and they looked inspired. So once again, time for the next game. 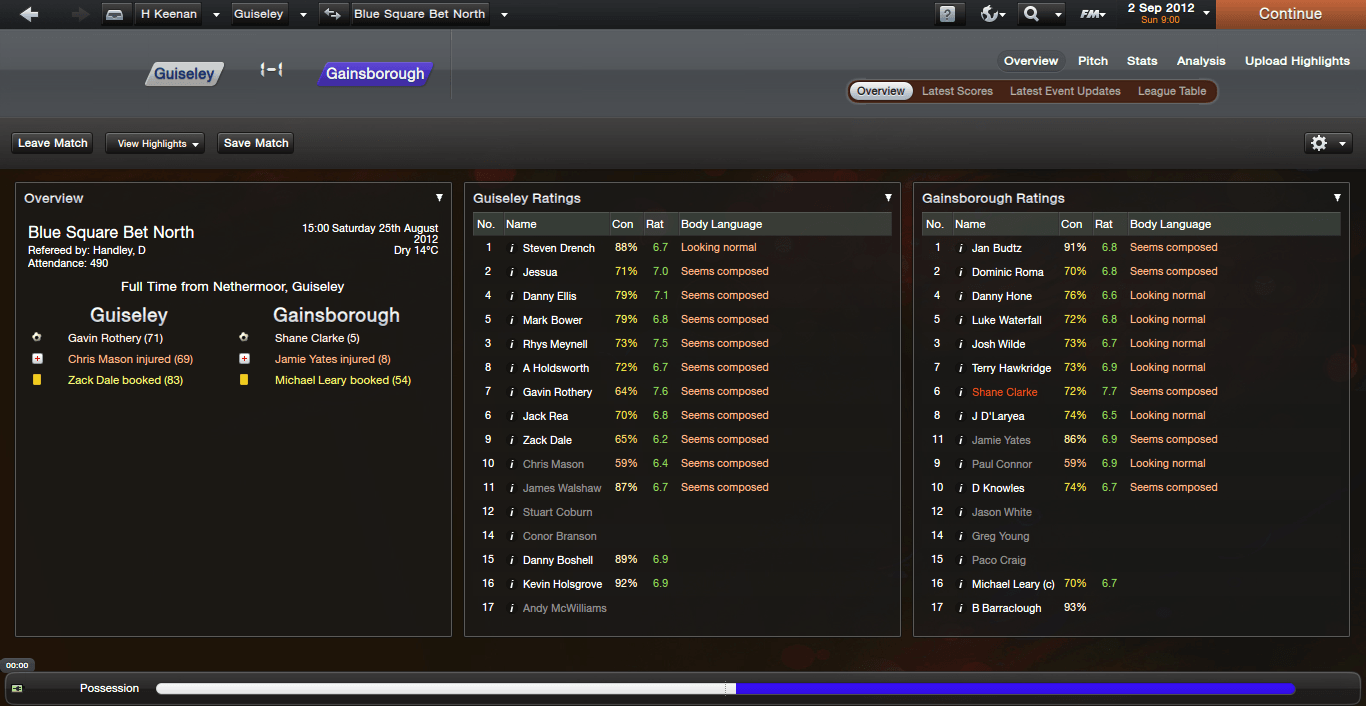 Once again we controlled the game despite going 1-0 down after 5 minutes. We were once again useless up front, but the midfield controlled the game for me and so it was a midfielder that scored my equalising goal. We tried hard to get our win but just couldn’t do it. I criticised the strikers and praised the rest of the team. All players looked happy with my talk. 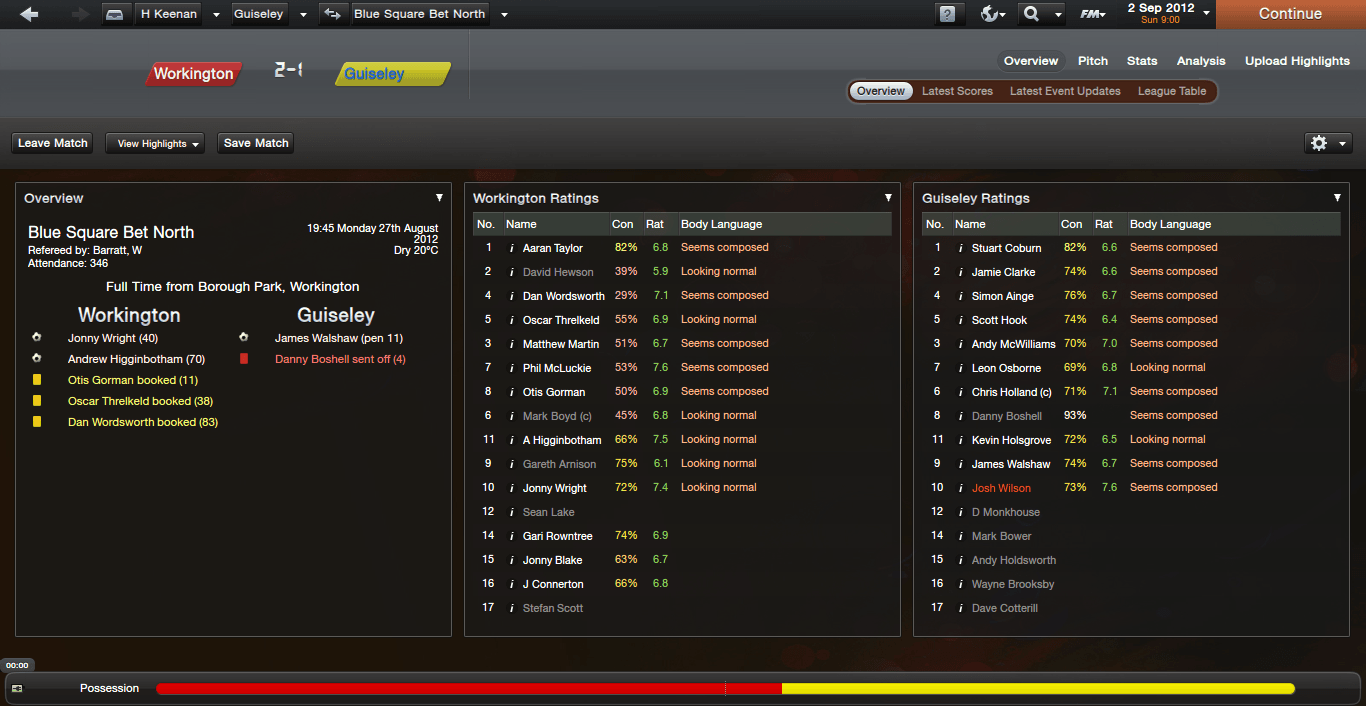 So this game was a shocking performance. With Danny getting sent off for just a simple bad tackle I was certain this game was going to go really bad. But I was shocked when James scored a goal not long after the red card. Things were looking good. Coming close to half time were I could encourage the team I let in a corner. It really struck the guys hard. The looked weak in the second half and again midway through the second half we again conceded a corner and the guys looked distraught and angered. I told the team I was furious with it and all but one looked inspired.

And so ends August, and awful start with only two points from 4 games. I think it’s time to try different approaches in tactics and hopefully my job ads for new staff will assist in my training to help the team gel and fire on all cylinders.
Login to Quote

JasonRM
8 years
Really great start to your story, the signings look to be quality, especially Duyile and David Lynch. Some Ok results, but I see your first win coming soon


September came thick and fast and I had to work hard to make sure the team fought hard and well to get points on the board after a dismal August.

In this game we started out well, but still conceded the first goal. It went on to the second half before the guys could really settle in and hit the opposition on the break. We finally equalised on the 68th minute. We fought harder and finally got our elusive and deserved win in the 86th minute through Gavin Rothery. This game was really difficult to watch as we both played well and the football was fast. Colwyn controlled the game for most of the match but we finally made the breakthrough with James Walshaw stepping up to the mark to help us claim our 2nd victory. 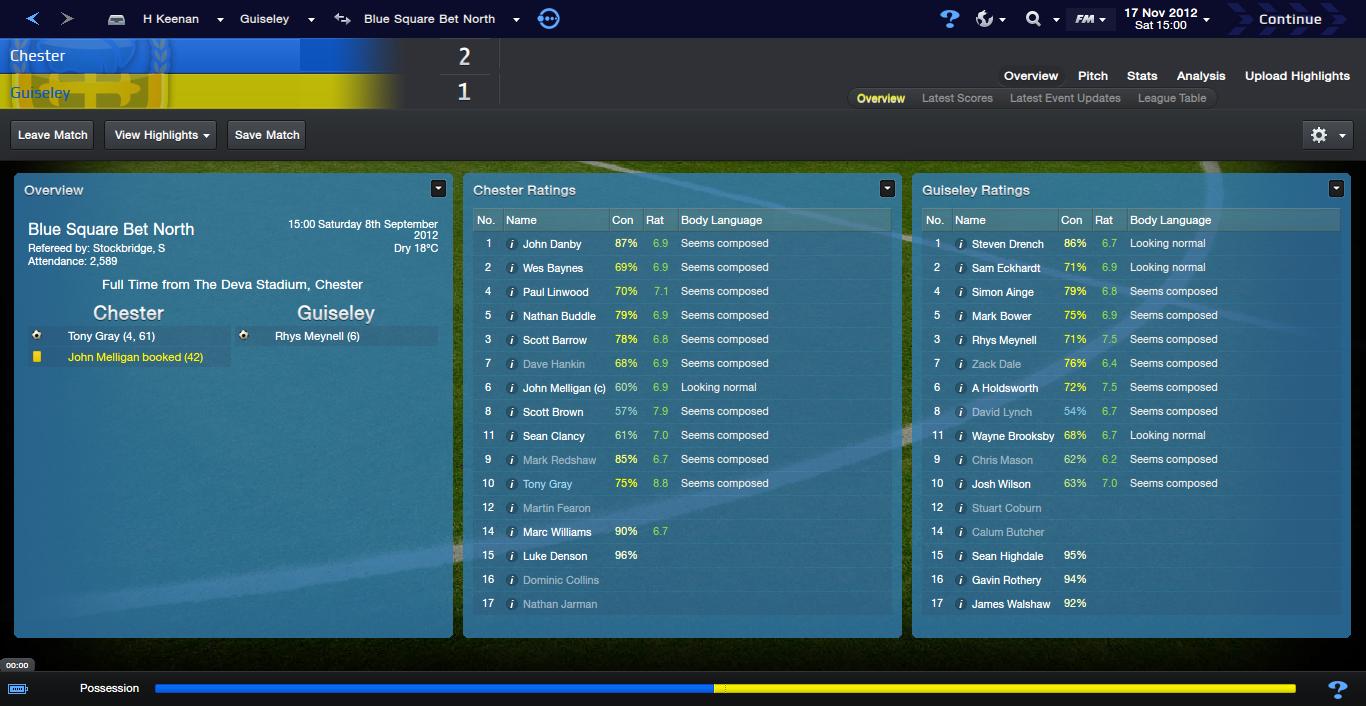 Another hard fought match, we went behind very quickly but struck back just as fast. Both teams played good football but Chester had just too much for the team. Chester looked much stronger and I began to realise that my defenders and GK's weren’t up to their tasks. 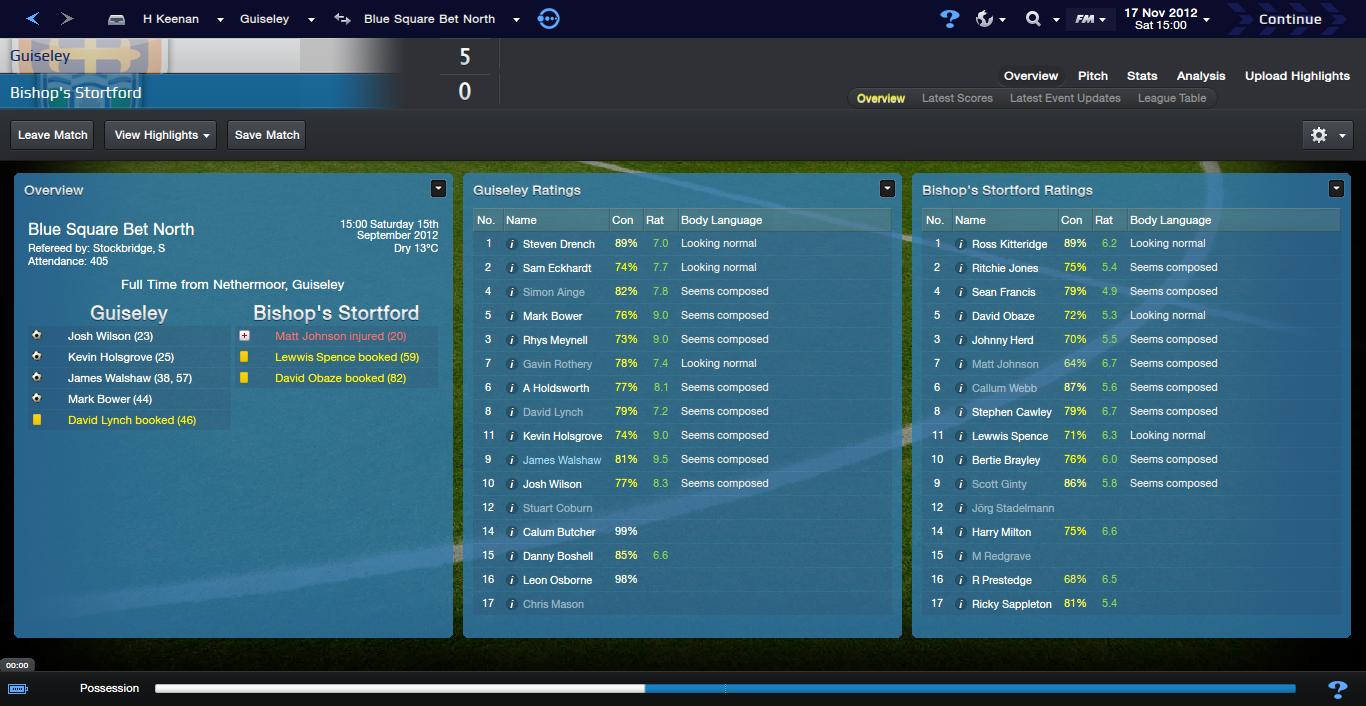 This game I asked the players to win no matter what. We needed points to keep the pressure on FC Halifax. They were taking the league by storm. The guys went out there with vigour and venom and knocked 5 goals past a lacklustre Bishops Stortford. James Walshaw is looking easily like my best player. 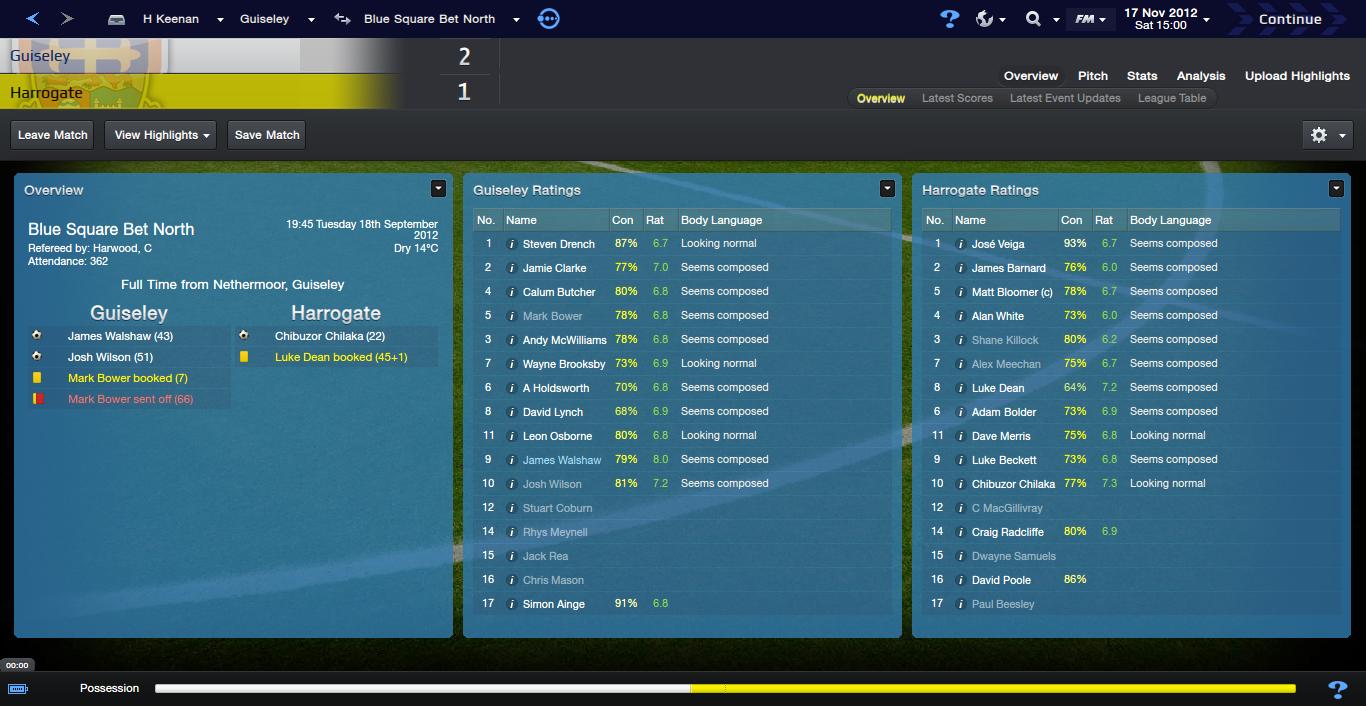 This was always going to be a nervy game playing against a local team, and sure enough they hit first with their top goal scorer Chilaka hitting a super goal from 20 yards. We didn’t sit on that though and equalised just before half time with that man Walshaw again. It didn’t take long after the restart were Josh Wilson stepped up to score his first goal for the club. The club claimed another great victory. Things were looking great for us, finally.

I made the choice that my team needed extra firepower to assist Walshaw in attack so I signed Harrogate’s leading goal scorer Chilaka. 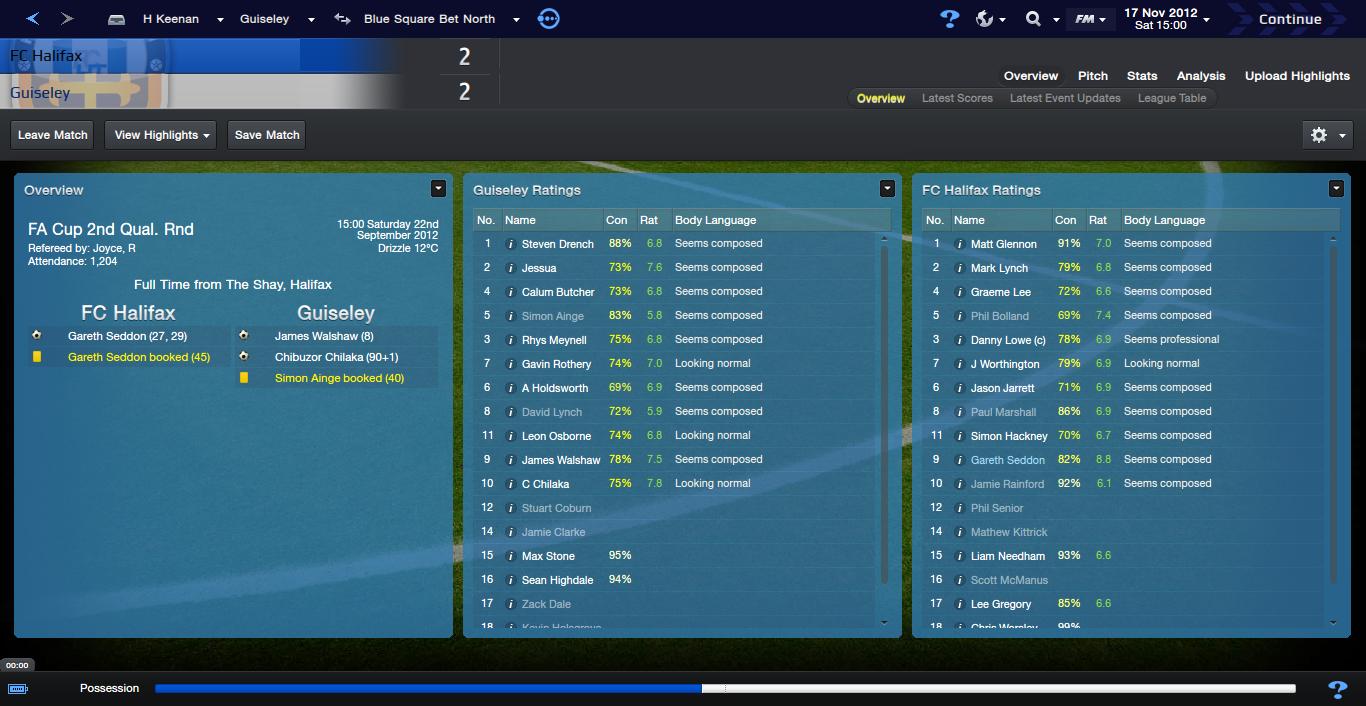 Ahh the FA Cup. A great source of income for smaller clubs. But this first test was no easy one with my opposition being my fierce rivals, FC Halifax. We took the opening by storm and Walshaw once again added to his club goal tally. But that pain in the backside, Seddon stepped up and ruined my day in just 2 minutes. He was relentless and admittedly, unlucky not to get a hat-trick. Things looked bad for us, but new boy Chilaka showed his prowess and scored what was the equaliser in the dying minutes which resulted in a replay. 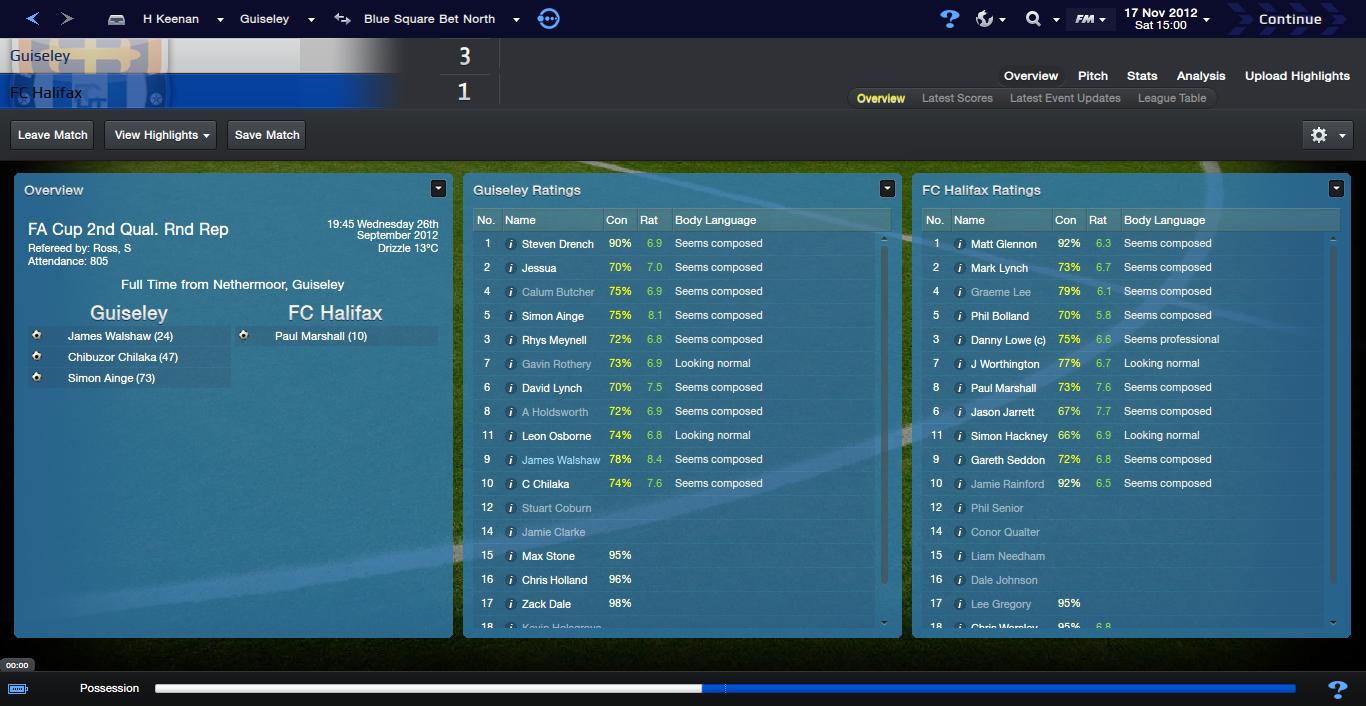 Replay time. FC Halifax at home, fans buzzing, and players raring and ready to go and give it all. It only took 10 minutes for it all to be dashed. I could see it turning sour, and with Seddon looking to spoil my party, I was shaking in my shoes. But my Hero Walshaw quickly settled mine, and the teams nerves with yet another goal. 1-1 at half time. I pushed the players on and it proved to be the right choice with Chilaka turning on the style and scoring almost immediately after kick off. We looked comfortable and in control, and in the 73rd minute Simon Ainge powered a header home from a cracking corner. 3-1, and safely through to the next round were we are to face North Ferriby. 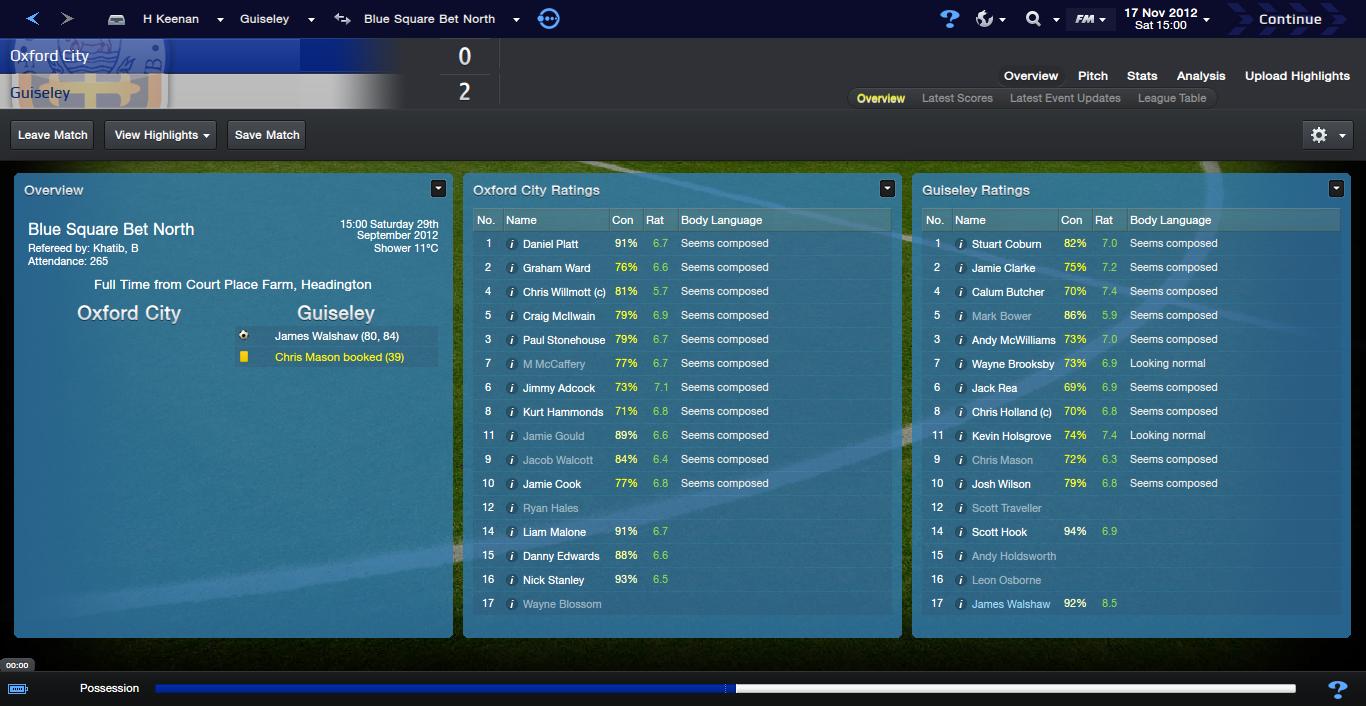 I was able to put a second team out here knowing that Oxford were inferior to my side. How wrong could one man be? Oxford really took me to the test. They tried and tried to score but thankfully they didn’t have decent finishers. But, neither did I. We wasted too many chances. In the 70th minute I made to choice to introduce James Walshaw to ruin Oxfords day and he did not disappoint me. He scored twice within 4 minutes to give us another win, and propel us a step closer to 1st place.

September was a great month for the club only losing one game and claiming valuable wins in the league but also a momentous win against FC Halifax to help us continue in the FA Cup. Fans looked happier and the board were content. I had issues still with some players at the club and was convinced that my GK’s were useless at handling shots, and their positioning was awful. I ordered my club scout to scout all those players in the Blue Square North and South who were unattached to contracts at their clubs to see who I could bring in to enhance the side and increase the clubs chances of winning the league.
Login to Quote

15Marty
8 years
I love Guiseley man! Got them to npower Championship in FM12. Is the Norwegian Tomas Halvorsen still there? In the reserves?
Login to Quote

Orichieva
8 years
Madrista, my victory finally came, along with a few others. Hopefully I can maintain this run and keep the pressure on Halifax.

Marty, I got them to League One before moving on to FM13. Unfortunately Halvorsen isn't there. I am disappointed in that. He was a scoring machine for me in FM12.
Login to Quote

You are reading "Guiding Guiseley to Glory".