This is the first save I have done on FM13 and I can't wait to show you the journey I took. The reason why I have decided to start with Middlesbrough is the fellow Australians in their side in Scott McDonald and Captian Rhys Williams. My goals in this save is simply to seal promotion into the top flight, qualify for Champions league within 3 seasons of being promoted & win the Champions league (with any team).

Also this is my first Story I am ever attempting so I hope you guys enjoy it! I am also a busy man with work and training so I will update when I can

A Background of Middlesbrough

Founded in 1876, Middlesbrough are a professional English club currently playing in the npower Championship. The club play their home games at The Riverside Stadium and possess top training facilities and excellent youth facilities. The Middlesbrough reserve team play at Rockliffe Park. The club also has good junior coaching and an established youth recruitment network. The club is affectionately known as Boro and retains a fierce rivalry with Newcastle Utd and Sunderland AFC.

Middlesbrough are a team currently in the second division but look to be back on the rise.


First Update will be up shortly!
Login to Quote 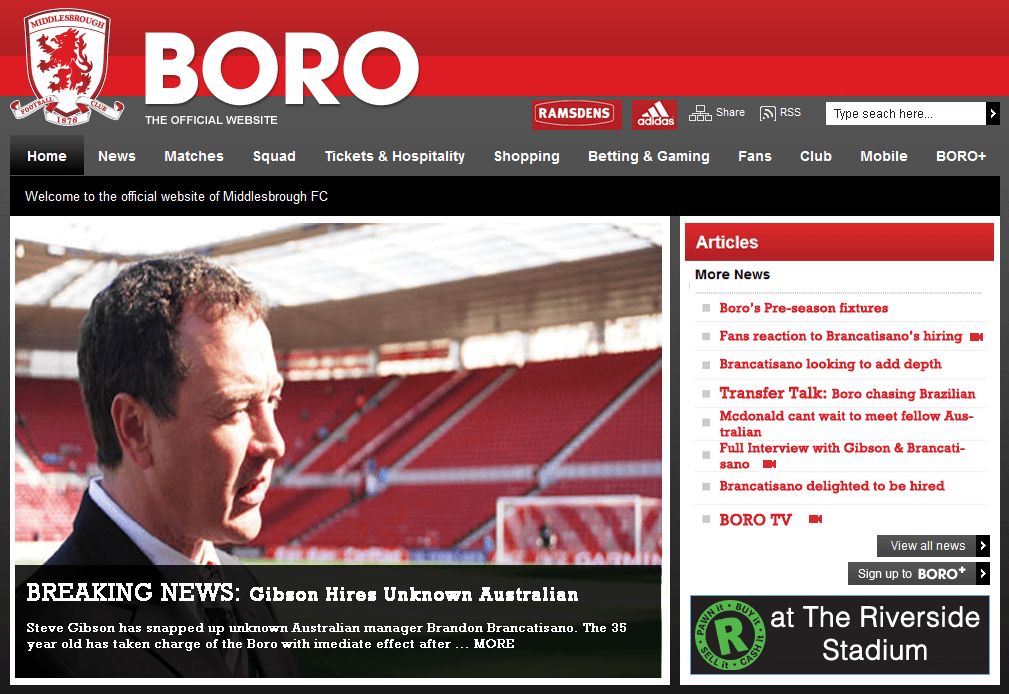 Steve Gibson has appointed appointed unknown Australian Brandon Brancatisano to take charge of Boro for the 2012/13 season. He has been appointed after the resignation of former boss Tony Mowbray and is set to be on a one year contract worth $17,250 a week. Information leaked by a Middlesbrough insider has revealed has has two clauses locked into his contract. One of these clauses is to ensure that Boro boss Brancatisano plays attacking football while the other clause is to develop Boros youth team to challenge for a spot in first team squad.

With no past managerial skills or professional footballing experience it leaves to wonder why Middlebrough Chairman Steve Gibson has appointed someone as the manager of a club of Middlesbrough stature. Whatever the reasons Brancatisano has begun his job at full speed ahead already signing Everton's 19 year old youngster Jake Bidwell for a undisclosed fee. Brancatisano is delighted with the signing and says that Bidwell can become the future of Middlesbrough and is the start of a long term vision for the club. The signing of Jake Bidwell has come after the club sold Joe Bennett to Aston Villa a few weeks ago.

But it was not the only signing Brancatisano has made in his 2 day tenure in charge of Boro as he has brought in some of his own backroom staff with high profile names from Brazil Batista dos Santos and Marco Squarizi joining Brancatisano at Middlesbrough. 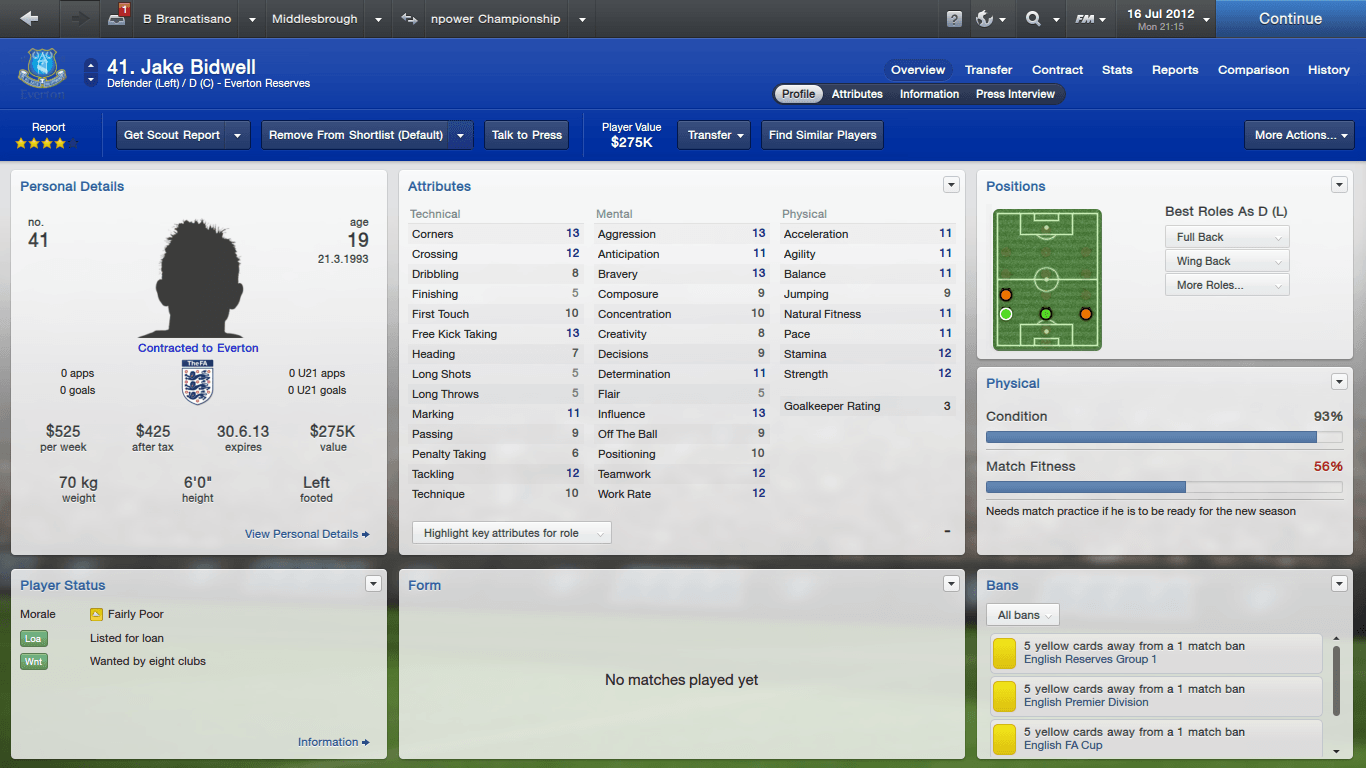 20legend
10 years
Love the effort put into this already, looking forward to pre-season!
Login to Quote

JasonRM
10 years
This is an incredible start Toffee, the effort you are putting into this is unbelievable! Good luck with the preseason

Arvind
10 years
Nice job with the article! How did you make it?
Login to Quote

Jer
10 years
TELL ME YOUR SECRET!!
Login to Quote


As in the website? I used photoshop to do it

Thanks guys will try and update as much as I can. Pauker I cant


It was a good Pre-season for the squad. With the vigorous training schedule and some tough opponents to be played it was never going to be easy for any player and would truly test them and prepare them for the season to follow. After a couple of weeks of getting to know the team and a lot of fitness training I thought the squad would be ready for the first challenge, Liverpool. This wasn't the case however, Liverpool came out to play and my boys never showed up. I was disgusted with the outcome and told the lads that this will never occur again under my reign in charge.

The travel to Celtic was good, although we lost heavily there where passages and times in the game where we were on top of them and played lovely football. The game against Norton was a different kind of challenge. Against a non-league team we had to remained focus and we did beating them comfortably. The game was a success in my eyes boosting the team morale and putting some confidence into our team especially the strikers.

Playing a rival in a friendly is an unlikely situation teams will find themselves in during pre-season. It was a tough loss to take as it always is against Newcastle but it showed us how much the gap between us has become and how much work is ahead to get us back on par with Newcastle. The two matches against Bedlington and Coventry went well. Our striker are getting amongst the goals and the team is linking up in play and starting to understand my philosophy. The 5-2 victory against Coventry shows in my eyes we are ready for the season ahead.
Login to Quote 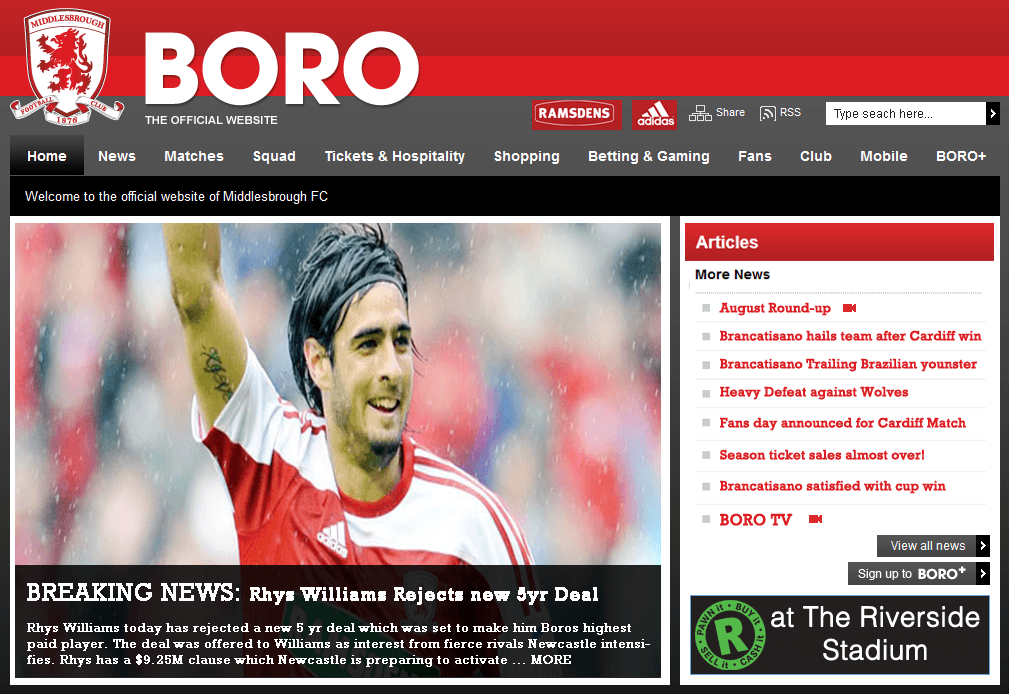 
Capital One Cup: First Round
http://icons.iconarchive.com/icons/giannis-zographos/english-football-club/128/Middlesbrough-FC-icon.png


Capital One Cup: Second Round
http://icons.iconarchive.com/icons/giannis-zographos/english-football-club/128/Middlesbrough-FC-icon.png

Players of the month

Player of the month: This award goes to Jonathan Woodgate. This is because he has played exceptionally well in August with an Average Match rating of 7.37. Woodgate has even chipped in with a goal in a match he was outstanding claiming Man of the Match award in the Capital One Cup: First Round against Chesterfield.

Young Player Of The Month: The young player of the month goes to Jake Bidwell. The young teenage defender a recent arrival into the Boro squad has made the most of the match opportunities handed to him by Brancatisano. A solid performance against Chesterfield where he set up Ishmael Miller in a great perfomance off the bench. Came on against Cardiff and showed glimpses of talent and is looking like a great signing for the future so he has taken this award for the month of August.
Login to Quote

Arvind
10 years
Mediocre start in the league, but things will pick up! Tough luck on Williams but hopefully you should be able to buy a replacement with £6m.
Login to Quote

JasonRM
10 years
Ok start to the league, don't worry about the beating by Wolves, the wins against Cardiff and Chesterfield make up for it. Unluck against Peterbourgh. Still a great story!

You are reading "BORO: A Journey Into The Unknown".