Tranmere raced out of the blocks and dominated the early proceedings, hitting the post nd having a goal rather dubiously disallowed from Mark Yeates. 25th minute, free-kick delivered from the right and Bergkamp, doing exactly what I signed him for, rising like a 6 ft 5 salmon and smashing a header past the goalie. 1-0

This was short lived, 9 minutes later Mark Yeates let one go from 30 yards. Bouzanis just stood there, watching it soar into the top corner. 1-1

The game was too and fro in the second half, chances at either end. Baxter missed 2 one on ones, then Akpa Apro missed 2. Either side could have won it.

Then, in the 94th minute, infront of the tranmere fans, Kal Naismith fired a free-kick into the top corner from 25 yards. The crowd went beserk, I went beserk. It was a goal which Kal completely deserved, as he's been largely bit part for the last 3 years, but never once has he complained.

After the game and the messages of "astounding achievement" "name on the fan's lips" and " unexpected promotion.' The board informed me that they'd made an extra 750k available for transfers. After further discussions, they have agreed to attempt to buy the stadium, and expand the youth facilities, which 3 years ago were fairly basic, and after this expansion will be "good"
Login to Quote 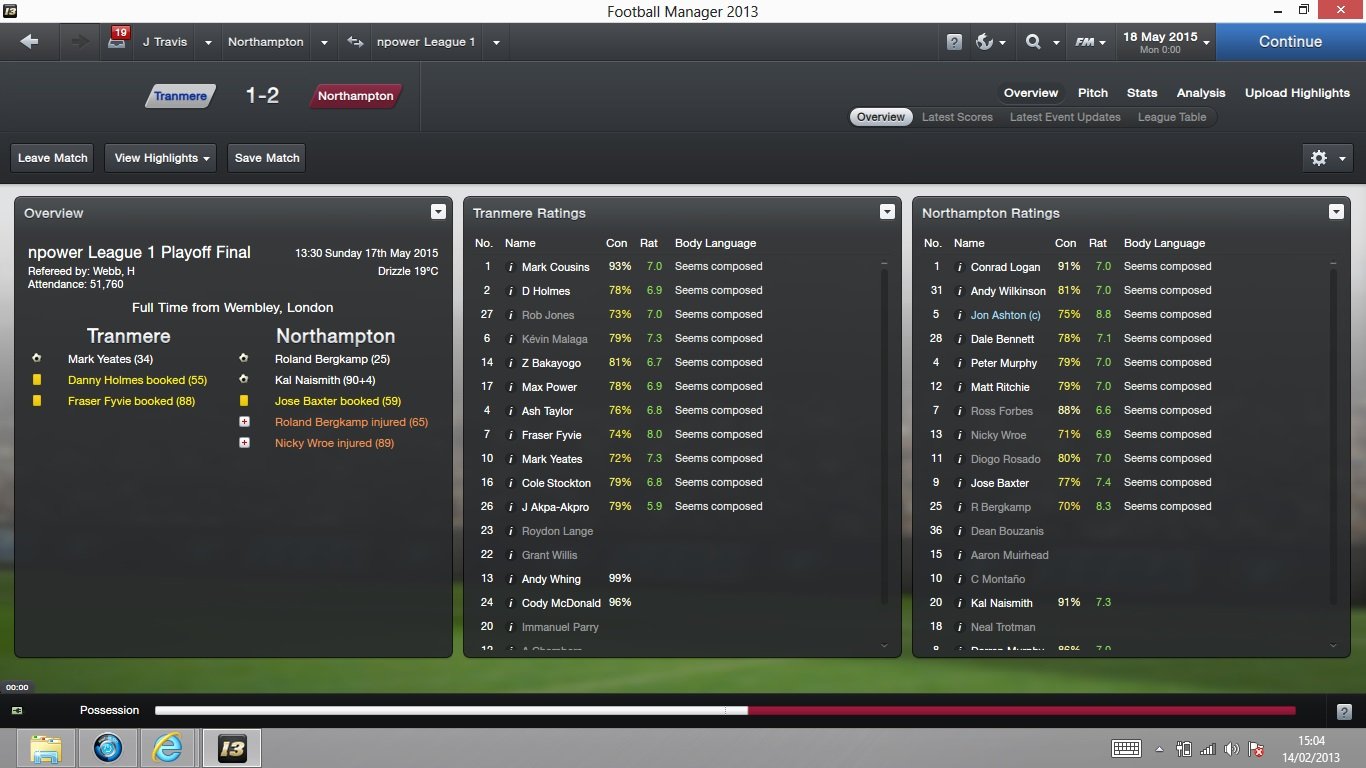 Out:
Roland Bergkamp - Blackpool -650k to b honest I knew in march Id made a massive error with him, he just wasn't of quality, so in the end I used his value hike after the promotion to make a tiny profit on him and call it quits

Jose Baxter - Southampton - 1 million this was a disaster, his release fee was a million, I forgot about this until the bid was made and despite me offering him as much as 12k a week he still chose to move. I wish him all the best.

IN:
John Flanagan - Liverpool - Free Fantastic! Potential to be a great right back, already solid, and a great example of using the big teams youth systems to further my own improvements.

Ryan Tunnicliffe - Man Utd - free another example of the above, in this league we're not going to miraculously start a play-off push and it's going to take time, for that we need a ball winning midfielder. Enter Tunnicliffe. Strong. Agile. Works hard. Passes the ball. Perfect

Nick Proschwitz, Alou Diarra, Diogo Rosado - Free Rosado returns, Diarra is a squad player, but I finally got my man in Proschwitz. (this may have been the reason Bergkamp was sold)

just strengthening really, Skarz took up 700k because he is a championship quality lft back and is only 26. Makombo is one for the future, Mackenzie and Collins are squad players, and Joe Newell was a massive one in the eye of Arch rivals Peterborough, who I stole him off on a free.

Pre-season began with dickings at Stoke and Ajax, followed by draws with Vale and Preston. Average at best.

Still looking for a centre-back, desperately.
Login to Quote

Hortensius
9 years
shaping up well by the looks of it. tunnicliffe is good at championship level. on the centre back front if you can get wootton then its worth it otherwise i'd have look at kalas or chalobah at chelski they can be available on loan and do a good job, Hard luck on losing baxter he was quality for me on my preston save.
1
Login to Quote

Travisio92
9 years
I did look for Scott Wootton, now at Ipswich. but despite being abackup they want close to a Million which I couldn't really afford. I settled upon Dan Burns from Plymouth, a 6 ft 7 tank who is defensively sound and young. Obviously predicted to finish bottom this season, I reckon I've got a squad to stay up comfortably,

first game was a 2-1 defeat to Blackpool at Bloomfield road.
Login to Quote

As you can see it's been a tricky start, pleased to get points on the board within this period, because I was only hoping to scav a few draws here and there. Reading we were horribly unlucky, we were 3-0 down at half-time and 4-1 down on 50 minutes but the response was magnificent.

Player of the month: Dan Burn
Login to Quote

The performances have been good, although I'm starting to realise how hard this league is. Sunderland still have Adam Johnson, who condemned me with 2 late goals. The Ipswich game was a bad one, we dominated and somehow lost, but the game at bottom of the league Birmingham City was massive, and thanks to Prostwitchz we got the points. Currently sitting 17th on 12 points, 2 above the drop zone.

League photo will be up from the end of October.
Login to Quote

What. A. Month. Everything clicked, we on the 3 home games (the target was 6 points) and then to win at Southampton was epic. The loss at Peterborough was the only black spot, where with ten left I led 2-1 only for Dean Bouzanis to drop two massive clangers, had he been able to catch a ball I would be well in the thick of the play-off scrap. 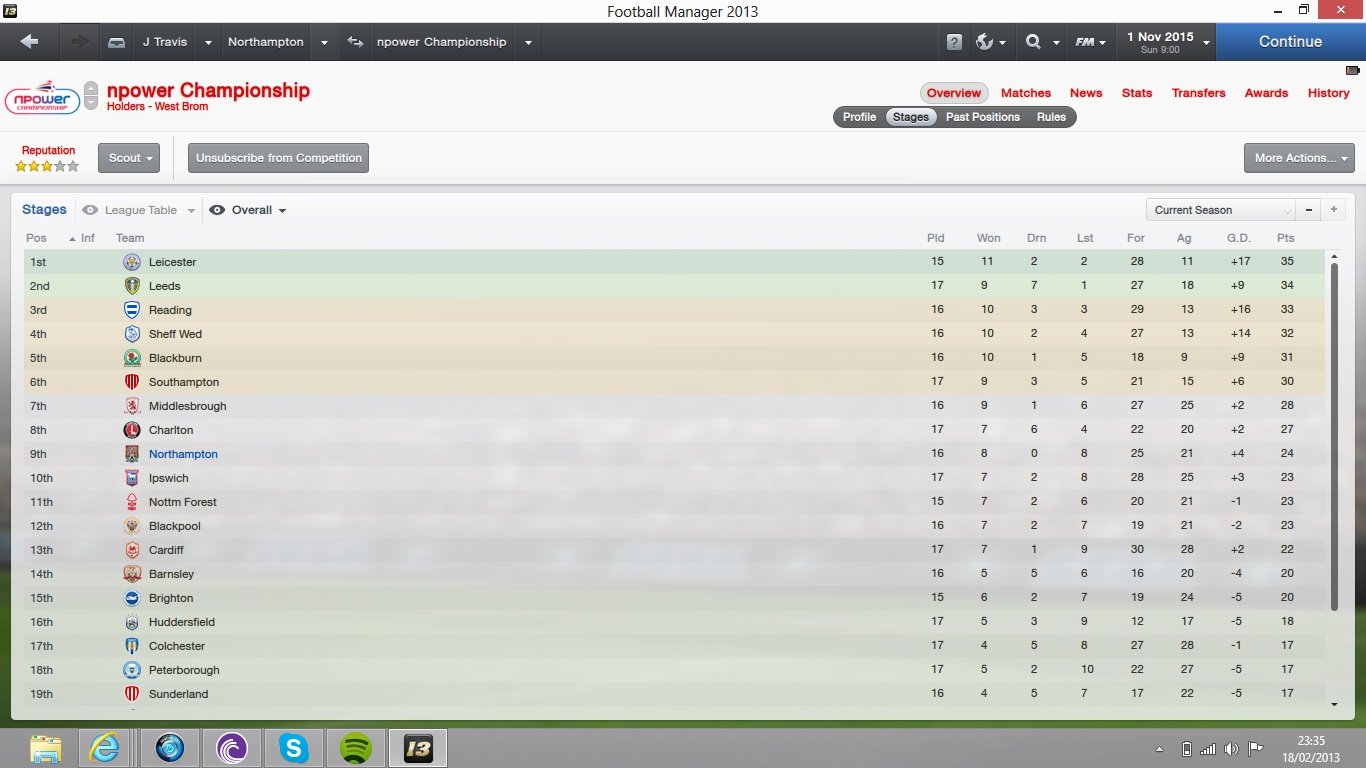 Pretty confident the mid-table finish I'm hoping for is more on the cards.

Player of the month: Nick Proschwitz
Login to Quote

The FM Rookie
9 years
That was a good month and you are looking comfortable in the Championship. Keep it up!

Cheers mate, at the November is going alright too, and there is some BIG news coming in the report at the end of this month.
Login to Quote

The first draw against Burnley was followed by 2 more. Another decent month, 3 games at the end where we were very poor but thanks to Proschwitz (Player of the Month) we managed to find the goal to stay alive in those matches.

Signing - Kenwyne Jones (Free Transfer): He only wanted 3k a week and I don't have a backup for Proschwitz, still awesome aerially and that's all he's really there to be used for.

Big News: Northampton undergoing takeover bid!: That's right! I've been under a transfer embargo for 2 weeks as the deal is thrashed out. It is a tycoon who is willing to put 2.8 million for transfers to availability if he takes over (According to reports.) However he may want a foreign coach in charge, meaning as exciting a prospect of having 3 millions worth of funds to attack the transfer market with, I will have to wait and see what happens regarding my job future.
Login to Quote

Travisio92
9 years
I must apologise for the last fewdays absence, as I enter January, I appear to have hit something in the game causing the "a serious error has occurred and the application needs to shut down" error to run. I am currentl making my last efforts to getting around it until I have to regretfully cut ties and try and find a new team
Login to Quote

Travisio92
9 years
The game is dead. And I will be beginning a new story in the next few days.

Absolutely gutted, but thanks for the 500+ views guys, really was fun to write, and will find a new challenge soon.
Login to Quote

You are reading "Northampton - The Climb".