I joined cardiff in July. Knowing the fans and board have high expectations of me to finish well.

My first game was against Fulham.

It ended 3-1 to them, but was a good chance for me to give my team a run out and spot my favorites.

Evans has recently took part in his first cup game for the bluebirds. But before that here are highlights of his first win agaisnt Dagenham & Redbridge


On the 28th July Evans was in charge of his first game agaisnt Argentinian side Olimpo. The game finished 1-1 with a goal from Joe Mason to put the Bluebirds level.
And then no change in score in extra-time ment George had to have his first penatly shoot-out just 3 games into pre-season to make pressure build, this game was even televised.

TheMS99
8 years
good start hopefully you will build on it

georgeevans
8 years
Thanks, i hope so too!
Login to Quote

Cardiff boss Evans has recently won his first majon game in charge of the Bluebirds, It came to shock when Leauge 2 Side Oxford took it all the way to penalties where George's men were unstoppable. 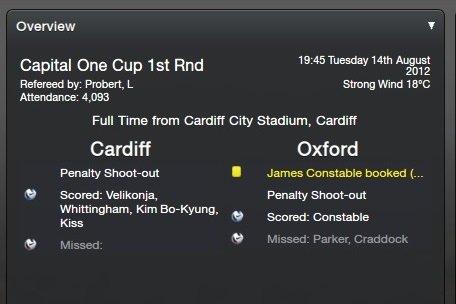 . The game kicked off at 15:00. 0-0 At half time, Cardiff where by far the better side. In the 68 min a penatly was awarded. Whittingham stepped up, GOAL!

1 touch football is the way Cardiff played most of the game, then the ball fell to Joe Mason who volleyed it straight into the top corner! 2-0 Cardiff .

. Cardiff had thought it was in the bag. With two quick injuries Joe Ralls and Kim Bo-Kyung had to come off

With Joe Mason. In the 86 min Derby scored, with a goal from D. Vassell.

Kane
8 years
Good to see the bbcodes being used early on. Good luck

k1rups
8 years
Good start mate take them to the top!
Login to Quote

You are reading "Cardiff City - nothing to something".