This story is using Pr0's update so Cardiff are currently in the Premier League. I feel this will provide a good challenge and a long lasting story. I have always enjoyed watching Cardiff play however i was never really sure or comfortable with the change of colours from blue to red. I hope i can lead them to bigger and better things.

Louis O.
7 years
I think the title should be changed to 'The Red Dragons Fly To The Top'

Jamesg237
7 years
I can't remember seeing a Cardiff City story so it will be interesting to see how this turns out. Good luck.
Login to Quote

The Bluebirds won England's second tier for the first time in their history by drawing at Burnley on Saturday. Cardiff have led the division since beating Barnsley away on 24 November. Their advantage stood at 10 points at the beginning of February before a slight stutter allowed Hull City to close the gap to four points by the end of March. But a six-match unbeaten run since then has proved enough for the Welsh side to be crowned champions with two games to spare. That result took Cardiff back to the top flight after a 51-year absence, having failed in the Championship play-offs in the previous three seasons.
Craig Conway gave Cardiff an early lead at Turf Moor, but the home side equalised in stoppage time to snatch a point that moved them four points clear of the relegation zone.
The winger said: "It's an important goal and it obviously gets us the winners' medal so I'm happy with that.
Malky Mackay has stated he is proud of the teams spirit and said that the lack of egos in his squad was a crucial factor in securing access to the top flight.

"This is a group of players who have consistency, a lot of togetherness and a lack of ego that will work for each other," said Mackay.
"To go up as champions is something we're very proud of." 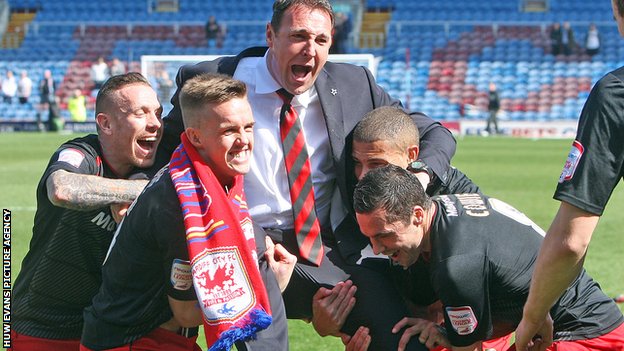 J - So, you two sit here for the first time in Cardiff colours as a Premier League club for a very long time. How does it feel?

MM - Fantastic. This club should of been here a long time ago with our recent seasons being so close to promotion, this one really is special
CB - IT feels great. My home club and long supporting team is finally here and I am delighted to be part of it.

J - It sounds like you'll be sticking around then Malky? Everton are currently looking for a manager after David Moyes' departure to Man United. Does that vacancy interest you?

MM - Not at all. This is just the beginning for Cardiff City and I want to be part of it. This club is destined to be great and I feel I can take them there

J - That's news Cardiff fans have been hoping to hear. Moving on, one game the fans are eagerly anticipating is the South Wales Derby versus Swansea. Can you win it?

MM - It will be an extremely tough game and hopefully the fans will remember that. Swansea are a top side and it is clear to see after their league finish last season and their Capital One Cup triumph. However we may be able to pull of a surprise. You'll have to wait and see.

J - Craig. You have forever loved this club. Do you see your career ending here?

CB - Well that all depends on how long Cardiff want me for. My contract runs out in 2014 and the way this club is going, I can't imagine I will be of much use however I will always love the club and respect any decision that they make regarding my future

J - Do you expect to make a lot of transfers in the summer?

MM - Unlikely, we have limited funds at the minute. However there are a number of good free transfers on the market. But I am not ruling anything out.

J - Thanks for your time guys. Good luck this season
Login to Quote

Inquisition
7 years
Will be following, good luck!
Login to Quote

Solid pre season apart from that dreadful loss to Derby. I feel a good season for Cardiff!
Login to Quote

Rablador
7 years
Really good start OTB, hope this story does as well as your previous ones

Titus Bramble was released by Sunderland at the end of last season. The English centre back has had 3 clubs in his career. He started off at Ipswich where he made 48 appearances. He then moved to Newcastle on a fee of £5m. In 5 years at the club he made 105 appearances scoring 3 goals. He then made a move to Wigan in 2007 for a free transfer. There he went to make 96 appearances in 3 years scoring 4 goals. In 2010 he made a one million pound move to Sunderland where he stayed for two years before being released.
Bramble is 31 years old and is on a 20k a week on a 2 year deal. His value is £1.5m

Sofian Chahed is a Tunisian right back arriving on a free transfer. The player started his career at Hertha BSC where he spent 9 years before making a free transfer to Hannover 96 where he stayed for 4 years then being released. He has made 8 appearances for Tunisia
He is 29 years old and valued at 700k. He is on a 14k a week deal for 1 year.

You are reading "The Bluebirds Fly to the Top".