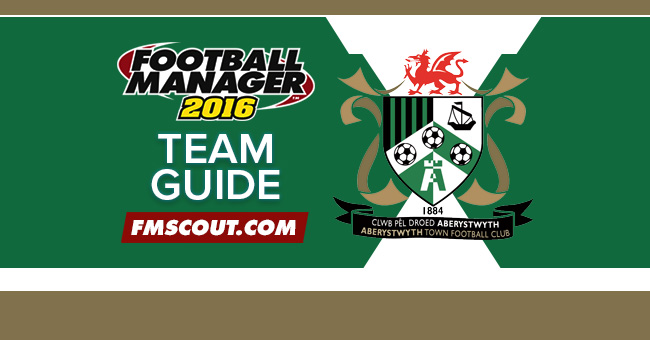 The club was founded in 1884 and plays at Park Avenue, Aberystwyth, where their ground accommodates 5,000 spectators with 1,002 of that capacity seated. Since the Welsh Premier League's inception, Aberystwyth Town are one of only three teams to have not been relegated from the division. Their best finish came in the league's first season, finishing in 3rd place in 1992/93.

In the summer of 2014 they rose to national attention when gloating qualifying for European football, when Manchester United failed to qualify. Sadly for Aber, their spell in Europe was short, going out 9-0 to Derry City on aggregate in the First Qualifying Round of the UEFA Europa League.

Achieving success as a Welsh Premier League is one of the hardest and most gruelling tasks in any Football Manager game.


Finances and Board Expectations

Aber are run by Chairman Tony Bates and Vice-Chairman Donald Kane. Tony Bates is a partner of a local solicitors and Donald Kane runs a local Pub.

As you look to help the club improve on last season's 4th placed finish, the starting budget for Aber is a tiny £10k with just over £1.5k freed up for wages, in which the board will expect you get a Mid-Table finish, which could prove to be the best option (Media Prediction: 8th/12). You can increase this budget by promising the board you'll get a 'Top-Half Finish' (£11.45k and £1.8k for wages) or 'Around Top Of League' (£12.54k and £2k for wages).

You can look to increase your budgets a little further by promising success in the JD Welsh Cup. If you promise to reach the final of the JD Welsh Cup and finish around the top of the league, your maximum budget will be £12.79k for transfers and over £2k freed up for wages.

If you hope to make some extra money through selling players, bare in mind that only 40% of the transfer fees will be available for you to spend.

The tactic you'll most likely see yourself playing with is either a 4-4-2 or a 4-4-1-1 with your star man, Chris Venables, in a Shadow Striker role playing just behind one of your strikers. The players in your squad fit this tactic, but bare in mind that you may be better off with a different tactic if you make some big signings.

To get the most out of your players, make sure you play them in a role which fits their style of play. Nearly all of the defenders in your squad prefer playing in 'Limited' roles so look to make sure they play to their best.

Goalkeeper
You have two near identical choices in goal with Mike Lewis and Chris Mullock, both having similar Current and Potential Ability and both preferring a Sweeper Keeper Role. Mike Lewis performs slightly better than Chris Mulllock who's on loan from TNS.

Right Back
At right back you only really have one choice, with 31 year old Stuart Jones, who despite preferring to play at centre back, is your best choice at the right side of your defence.

Left Back
The left back position is filled by one of the youngsters in your raging squad, 25 year old Cledan Davies. Cledan has a lot of experience for Aberystwyth at this level, having played in over 100 league games and nearly every league fixture for the last three seasons. You should hope he doesn't get injured as you don't have much cover for this position.

Centre Backs
Your player assistant manager, Wyn Thomas, and Lee Surman are your best centre back pairing, with Stuart Jones being available to come in if you acquire another right back. Both have a lot of experience, and should be able to do the job for you in defence.

Right Midfield
On your right wing, you have one of your only English players in the squad, Geoff Kellaway, who is equally adept on the left. His best attributes are his pace and acceleration and he will look to run with the ball when on the flanks. He has been at the club since 2003 and can also provide you with goals as he's scored 21 league goals in the last two seasons. You should hope he doesn't get injured as you have limited back up in this position.

Left Midfield
If you transfer in a player at right mid, your best option is to play Geoff Kellaway on your left, with Craig Williams and Luke Sherbon offering strong back up options.

Centre Midfielders
The middle of the park is one of the weaker areas in your squad with Antonio Corbisiero, Luke Sherbon and Ross Stephens offering limited options as ball winning midfielders. Your best option is in fact, star player, Chris Venables, who would be the best player in a number of positions, but it's normally best to play him as a shadow striker, providing you have players who can perform at centre mid.

Attacking Midfielders
You have strength in this department with Welsh Premier League star, Chris Venables, thriving as a shadow striker over the last few years in this position. He has played in the last 13 consecutive season in the league, playing for Aber for four of those. Venables scored more goals in 2014 than any footballer who struck 39 times, one more than Real Madrid's Ronaldo and four more than Barcelona star Lionel Messi. In the last two seasons he's scored 52 goals in the Welsh Prem, and should definitely be the star in your side. Luke Sherbon is also available as a strong cover option if you decide to play Venables in a different position or if he gets injured.

Strikers
You have three strong strikers that can fill the position up top, with Rhys Griffiths, Jamie Reed and Darren Thomas being your best choices respectively. As you only have one striker in the suggested tactic, make sure you play whichever striker is in the best form, as this can often be more important than the players ability.

Your priority should be to sign a new goalkeeper, centre mid and a full back. You could go on and make lots of signings to cover all your positions, but you must make sure you transfer shrewdly and budget wisely.

Some potential quality signings include:
GK - David Stulfhelder (No Club) - Free - A solid 39 year old keeper who you can grab up on an amateur contract
RB / RM - Mark Connolly (Bala) - Free - An experienced winger who will be one of your star players, if you manage to persuade him to join. Can also provide cover at right back and up front
CB - Alex Evans (Goytre) - Free - Young 22 year old centre back with bags of potential who will get in your starting line up immediately as well as being one of your best players
CM / AM - Kurtis March (Port Talbot) - £3k - Young 22 year old centre mid who will run the team from the centre of the park, can also cover at attacking mid. You will have to wait until January to sign him as he has only recently signed for Port Talbot
CM - Nathan Craig (Caernarfon) - £500 - A strong midfielder who you will be able to sign if you free up a large amount of your wage budget

Other signings worth a look at include, Jamie Tolley, Tom Roberts and Nathan Waters.

There are plenty of young Welsh players you can sign for free, just keep looking.

To summarise, with a couple good signings and a bit of luck, winning the Welsh Prem is a task you should be able to manage.
But success in Europe? Now that’s near-impossible.