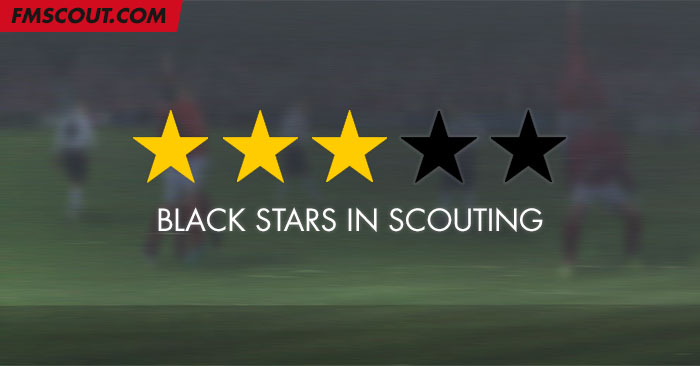 Black stars can be found on players who haven’t yet been fully scouted, or are at an age where the scout or coach doesn’t feel they can accurately state the potential of the player.

You will find the older the player becomes, the more accurate the scout or coach becomes with their rating of the player’s potential.

What are black stars in scouting?
Black stars is not a hint towards potential ability that a player can reach if managed correctly. Black stars indicate uncertainty.

You need to keep scouting the player until black stars disappear. It usually takes at least 2 weeks, but may require more time depending on the judging qualities of your staff.

An example
Let's see an example. You send a scout on a player and he says on the scout report that a player's Current Ability is 3 stars and his Potential Ability is 5 stars but with the last 2 stars in black. This means that the player's PA could be as low as 3 stars, but also as high as 5 stars or somewhere in between.

Remember that a player's Potential Ability is fixed, so no amount of training or tutoring will get him to be better than his actual PA.

Now let's assume you signed the player without further scouting. All your coaches agree that his CA is 3 stars, but his PA is just 3 stars he's playing to his full potential. Most likely that's true. Be aware that your scout or your coaches could be wrong, so make sure their judging (of CA and PA) attributes are high enough to rely on them.

The age factor in scouting
Black stars disappear if the player you're scouting is at least 25 years old, sometimes before if your scouts or coaches know the player well. 25 years old seems to be a cutoff point and you'll see from your scout reports that for every player over this age his PA stars match his CA stars. The player in question might have a higher PA but his chances of reaching it are much reduced as he gets older.

Questions for discussion
- Do you think black stars is a nice touch?
- How often do you encounter them in your saved games?
- What is the longest period you had to send your scout on one player until black stars disappeared?
- Do you trust your staff to assess players or do you have more confidence in your own judging skills?

Discussion: Scouting Reports: Why do some players have black stars?