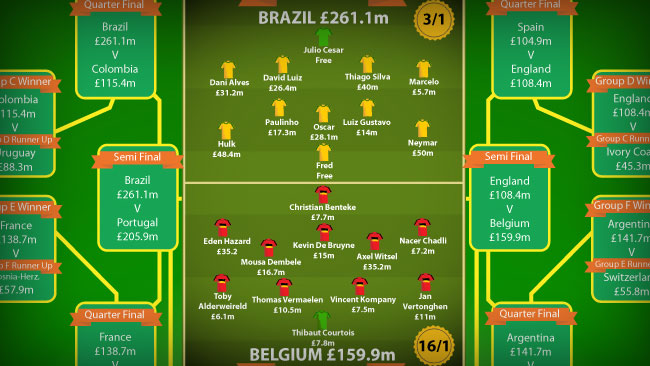 Is This The Best Way To Pick The World Cup 2014 Winner?

The World Cup is now just around the corner and the folks at World Cup Odds have come up with an infographic aimed at looking at alternative ways of ranking the World Cup teams. The main feature is a look at how the World Cup draw would be played out if the teams with the most expensive players won every match whilst other ranking criteria used includes the results of 100 independent World Cup simulations on the game we all know and love – Football Manager 2014.

Brazil come out on top of a World Cup decided by transfer fees and do so comfortably. The combined most recent transfer fees of their most used eleven players at the Confederations Cup total £261.1m and that is £55.2m more expensive than Portugal’s most used eleven in WC qualifying (£205.9m) and £101.2m more expensive than Belgium (£159.9m). In the infographic it is actually Belgium who reach the final of the World Cup rather than Portugal and that is thanks to the World Cup draw which sees Portugal meet Brazil a round earlier.

England hugely overperform in the infographic, eventually finishing fourth at the World Cup despite being only the eighth costliest team at £108.4m. This is due to a fairly kind World Cup draw should they win their group, which they would do if it was decided by transfer fees.

Transfer fees are factual whereas valuations are done on an independent basis and the two can differ significantly. This is mostly because players who are still at the clubs they started their careers at have to go down as having a transfer fee of £0. No team represents this difference more than Spain. Thanks to Sergio Busquets, Andres Iniesta, Xavi, Pedro and Iker Casillas all having never moved clubs Spain’s total transfer cost is just £104.9m whereas independent valuations in today’s transfer market suggest their team is worth £278.5m, more than any other team.

Argentina also suffer with transfer fees not representing their true worth. Lionel Messi was snapped up by Barcelona as a youngster so he contributes nothing to Argentina’s total transfer values of £141.7m. He alone is independently valued at over £100m and Argentina’s total independent value is rated at £265.1m which puts Argentina in second in terms of independent team valuations.

In 100 independently run Football Manager 2014 World Cup simulations Italy emerged as the most reliable team, winning 21 of those simulations. Argentina and Germany were very closely matched with 17 and 16 respectively whilst Spain and England were the only other two teams to reach double figures with Spain clocking up 14 wins and England winning the World Cup 11 times.

The biggest shock was perhaps Brazil’s poor performance. In 100 attempts they won just 4 World Cups despite being the hosts. That doesn’t really reflect their real life chances or odds, they are currently 3/1 favourites to win the World Cup. In the simulations they won only the same amount of World Cups as Uruguay and only twice as many as Mexico, who did extremely well to win 2 World Cups. Other shocks included Croatia and South Korea both winning a World Cup.

Will host nation Brazil win the 2014 World Cup? Check out the latest odds, stats and tips on the World Cup at WorldCupOdds.com.