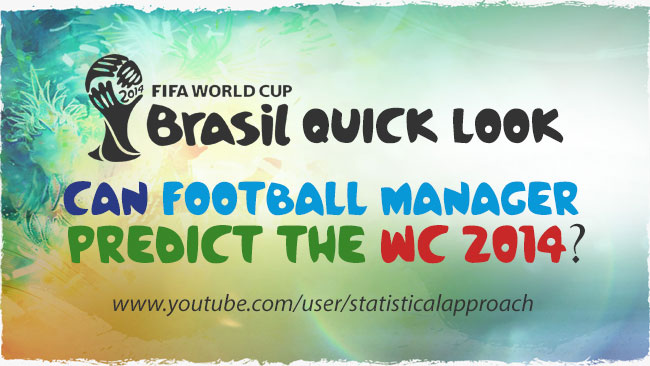 
The 200 winners provided very few surprises with 17 unique winners. Some of the more unlikely teams included -- Russia, Switzerland, Nigeria, Cameroon and Ivory Coast. Of course the perennial contenders all featured heavily -- Spain, Argentina, Brazil, Italy and Germany. Interestingly Football Manager 2014 suggests that Holland and England are much more likely to with the tournament than Belgium. Perhaps that is an indication that it values current ability over potential. The vast majority of the Belgium side are much younger in comparisons to Holland and England who are pinning their hopes on senior stars such as Robin Van Persie, Arjen Robben, Wayne Rooney and Steven Gerrard. Players like Thibaut Courtois and Romelu Lukaku are coming into the tournament after fantastic seasons out on loan. Please note - Football Manager 2014 can't account for player’s improvement past the January data update.

Essentially we are using 4 month old player stats as a guideline to how teams will perform at this year’s World Cup. Every team is in the same situation though, it simply hurts teams with young squads and potential stars more than it does sides with established players and well-known names. It’s worth noting that any players who have improved dramatically in the last few months wouldn’t see that benefit in Football Manager either, so that needs to be taken into consideration when looking at any results. 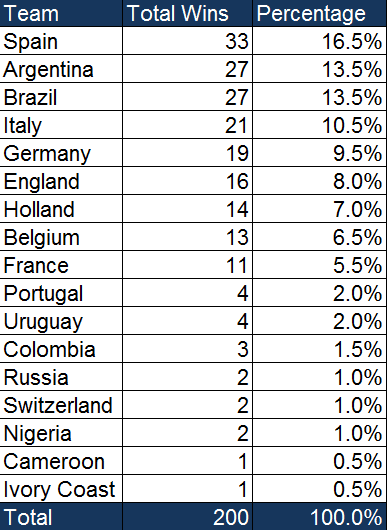 There are a few key takeaways from the above results table that I’d like to breakdown.

Firstly it goes against the current odds for the competitions with Brazil and Argentina holding favouritism with the bookmakers. Seemingly Football Manager 2014 doesn't take into consideration that the World Cup will be played in South America and no European team has ever won on that continent. Even when you compare sides such as Argentina and Italy there isn't a huge different in results with only 3% (or 6 wins outs of 200) splitting the sides.

There is a big jump from the two 11th placed teams, Portugal and Uruguay, both with 4 wins each (2.0% respectively) to sides in the top 10. This would seem to indicate Football Manager identifies a gap in quality between those sides.

The below graph illustrates the difference in likelihood between teams: 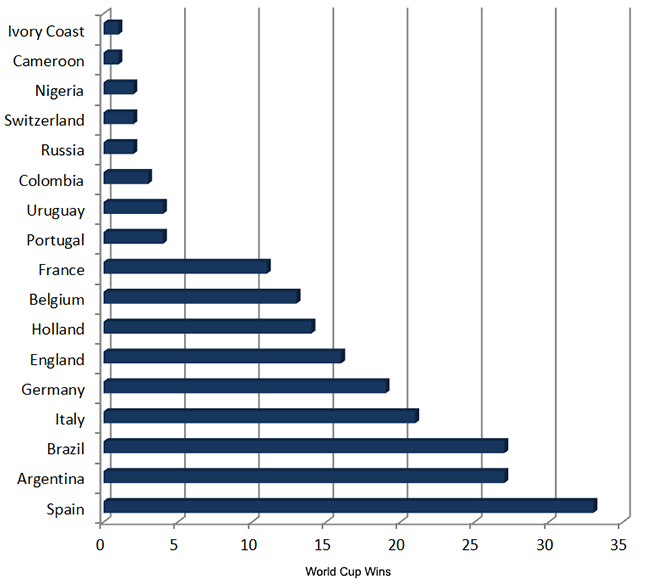 As a general comment it's worth saying that sides in the World Cup classed as "dark horses" haven't fared well in this simulation. Uruguay, Colombia and even Belgium would be expected to have more of a chance of lifting the trophy on July 13th at the Maracanã.

I'd be interested to hear people's thoughts on this but I'll provide a few topics of discussion. 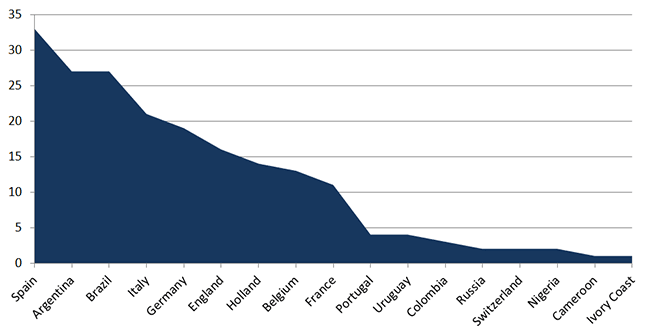 When analysing the data I, at least subconsciously, ignored the bottom 5 sides – Russia, Switzerland, Nigeria, Cameroon and Ivory Coast. I feel that the game is always going to through up some anomalies and if we ran this simulation 1000 times then many more smaller nations would feature at the very bottom of the list.

Mexico, Japan, Bosnia, USA and South Korea could easily replace the aforementioned 5 bottom ranked sides I don't think it would have much impact on the findings. As I said earlier, they are simply anomalies that are bound to happen when performing a simulation within a football management computer game.

Below is a sample of a dream team that was produced by one of the two hundred simulations.

It wouldn't be viable to post all of the dream teams that were created during the simulation but I felt the below team gave the best representation of what is likely to happen according to Football Manager 2014. 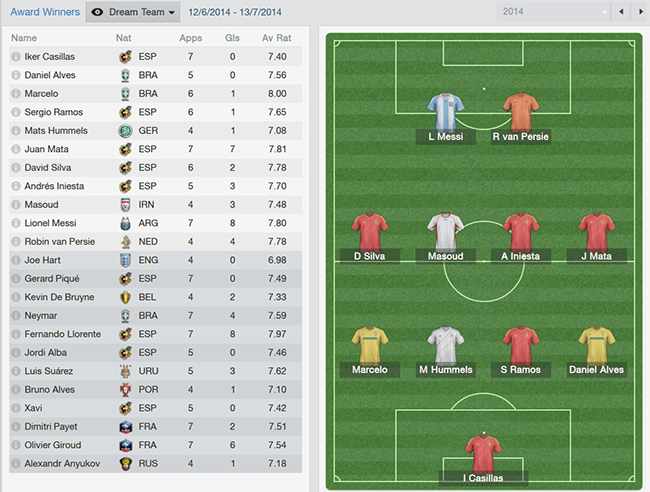 I think firstly I should mention the one exception from the "best representation" that I mentioned earlier. Masoud - I don't think I saw him feature in the best XI at any other point in the 200 run simulation. The rest of the players feature frequently though. Players like Iniesta, Llorente, Silva, Mata, Ramos, Alba and Casillas are nearly always included from Spain, Pique and Navas are others who often feature. It's seemingly a selection of around 5 or 6 Spanish players every time they do well in the tournament. I imagine part of this is based on in-game reputation and of course another part is related to average rating during the tournament.

Neymar is usually in the starting XI of the World Cup 2014 Dream Team. Brazil regularly reach the semi-final or final and he's practically always integral to that.

Luis Suarez, Uruguay won 4 of 200 World Cups during the simulation. Suarez won 3 player of the tournaments and Edison Cavani won it on the other occasion.

Kevin De Bruyne is quite often the only representative from Belgium in the dream team. I'd say on average he appears more than Eden Hazard or Vincent Kompany which of course seems slightly odd.

To only see one German player featuring is very unusual and to see no Italians is even rarer. As I mentioned above, I was forced to pick a sample World Cup so I could talk about specific examples of players. You'll see below the actual results of that World Cup. As a general rule Italy would do much better and therefore more players would feature. The same can be said about Germany but to a lesser extent.

It's a shame I couldn't find an example that ticked every box but I felt this was the best example to document the findings of the simulation. Teams like Spain, Brazil, Argentina, France and Germany very often get to the later stages and not to have a "random" team in the semi-finals meant it was much easier to show a good example of what usually happens at the World Cup in Football Manager 2014.

Firstly I'd like to state that I fully appreciate that this isn't in any way a predictive model or something other than an interesting idea based around a computer game. With that being said, I think some of the finding could spark debate and certainly make people think a little more about how teams are evaluated in the game in comparison to public opinion or a firm making odds for the World Cup.

The 200 team simulation has made me think a little bit more about some of the flaws in Football Manager 2014 but it has also made me appreciate that overall it isn't far short or what most people would expect to happen at the World Cup. Teams such as Spain, Brazil and Argentina to do very well and the potential to see a surprise team come from nowhere and have a very competitive tournament.

Regarding the actual result, Football Manager 2014 predicts Spain will win the World Cup! 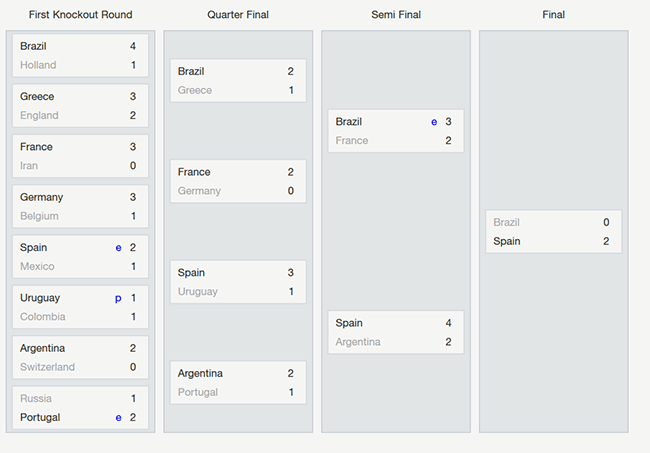 If you've enjoyed this article and/or video then please consider subscribing to my YouTube channel.

We've also recently started a "Quick Look" preview series on the World Cup.
Myself - @statisticalapp - and FM Scout - @fmscout - will also tweet out the links each day.