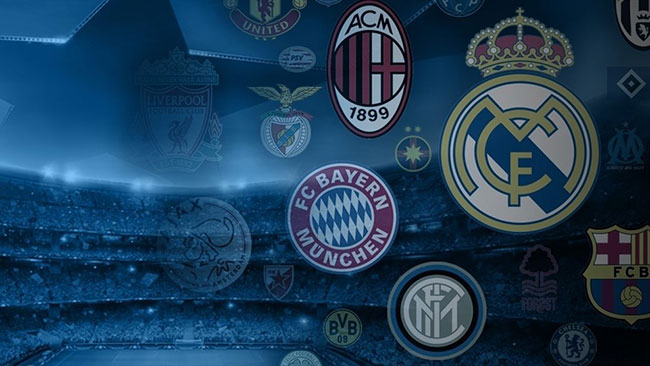 The 2016-17 UEFA Champions League kicks off next week as the finest teams across Europe begin their journey in hope to get the hands on the most sought-after trophy in European club football.

Real Madrid won it for an astonishing 11th time last season despite changing manager half way through the season. La Liga rivals Barcelona start the competition as the bookmakers' favourites as is the norm, but according to My Betting Bonus and other odds providers there are still a few other teams with a good chance of winning it all.

Here's a look at the five teams we think are the favourites:

The defending La Liga champions have a 100% record domestically this season - thrashing Sevilla 5-0 on aggregate in the Super Cup, and then hammering Real Betis 6-2 in the league, followed up with a 1-0 win Athletic Bilbao before the international break.

Luis Enrique's side are always hard to beat and it did come as a little surprise to see them beaten by Atletico Madrid almost convincingly in the quarter-finals last season - outplayed in both legs for two hours when it was 11 versus 11. Fernando Torres' sending off in the first leg was really what kept the aggregate score close.

Barcelona have splashed a bit of cash over the summer - they will be looking for Samuel Umtiti and Lucas Digne to strengthen the defence, something that the Catalan club haven't always been great at following the retirement of Carles Puyol. Behind them, Jasper Cillessen will compete with Marc-Andre ter Stegen for the goalkeeping slot following the sale of Claudio Bravo to Manchester City.

Reinforcements in the way of Andre Gomes, Denis Suarez and Cristian Tello have arrived in midfield whilst striker Paco Alcacer has joined from Valencia. The highly-rated Spaniard will be a useful alternative to Lionel Messi, Neymar and Luis Suarez, giving the fearsome front three a breather during the season.

Pep Guardiola failed to lift the coveted trophy with Bayern Munich during his three-year stay in Germany so will new appointment Carlo Ancelotti fare much better? The Italian tactician was responsible for Real Madrid's La Decima two years ago.

Bayern Munich have all the tools, and the signing of Mats Hummels from rivals Borussia Dortmund only strengthens their defence which was arguably their achilles heel in this competition under Guardiola.

Robert Lewandowski, Thomas Muller, Franck Ribery and co give the dominant Germans real fire power up front and it's going to take an elite team from this list to eliminate them from this season's competition you'd have to imagine.

Are their odds too short in comparison to some of the names in this list? Arguably so, but with a head coach in charge that has lifted this trophy a few times in the past, they will certainly be there or thereabouts come May.

Zinedine Zidane surprised many when he replaced Rafa Benitez in January and went on to win the Champions League a few months later, beating city rivals Atletico in the final on penalties.

Domestically, Real Madrid are actually on a 14-game winning streak in La Liga since losing at home to an Antoine Griezmann goal in the derby. Though they weren't overly impressive in beating Celta Vigo 2-1 before the international break courtesy of a late Toni Kroos strike. They are however awaiting the return of superstar Cristiano Ronaldo.

With Real Madrid's passion for this competition and Zidane's success last season Real Madrid can't be ruled out from being the first team to defend the trophy in the Champions League era.

Completing a Spanish trio are last season's runners-up Atletico Madrid, losing on penalties and reaching the final for a second time in three years. Diego Simeone's side have made a woeful start to the La Liga season with back-to-back draws, arguably putting them out of the title race already!

If they're too far behind Barcelona and Real Madrid in the title race come 2017 then one has to think the intelligent Argentine manager will switch focus to this competition in which he has proven himself over the past three years, falling ever so narrowly short in the final on both occasions to their big brother.

Atletico Madrid have kept Antoine Griezmann and their stars over the summer so they have both the playing personnel and tactical skills to be within a shout of winning this season's competition.

England's best representatives this season will likely be either Manchester City or Chelsea. We leaned towards the Manchester club as they have an experienced manager in winning this competition in Pep Guardiola.

Question marks still remain over the fitness of Vincent Kompany in defence - the Belgian will almost-certainly be required if they're to go all the way because the defence has looked fragile without him, both in the opening three Premier League games this season, and the previous years when he has been absent. With Sergio Aguero, Kevin De Bruyne and David Silva in attack they have some of the world's best, but they will need the likes of Raheem Sterling to step up in the big games, something he has yet to really produce so far in his career.

It's hard to make a case for City being good enough to beat the likes of Barcelona and Bayern Munich over two legs right now, but once Pep has his tactics in place perhaps he'll be able to pull it off.

Barcelona, Real Madrid and Robert Lewandowski are the key players when it comes to the Golden Boot. Three teams who are expected to go far. Luis Suarez and Cristiano Ronaldo are the bookmakers' 4/1 favourites and it is hard to pick between them. We'll lean towards the Uruguayan if you want a tip as Ronaldo has been out injured over the summer and potentially misses at least one group game. Suarez just scores goal after goal.

Real Madrid arguably have the favourable group to hand out a couple of thrashings in which Ronaldo could make a statement of intent in winning the Golden Boot.