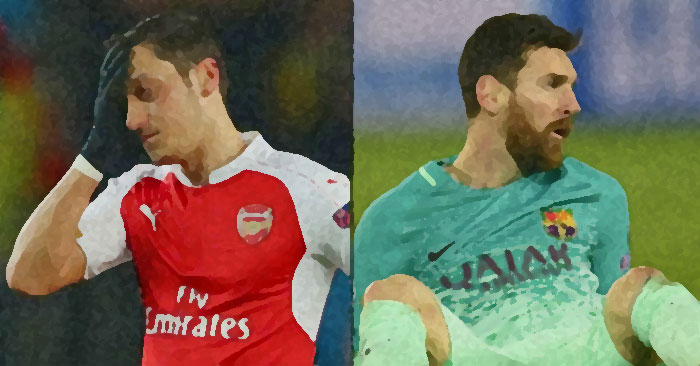 To have their Champions League dream cut short in the round of 16 stage is now the norm for Arsenal. The Gunners stare at another early knockout stage exit from Europe after folding at Bayern Munich last night, but they have an unlikely partner to share their grief with this time round: Barcelona.

To help matters, Arsenal and Barcelona aren’t unfamiliar with each other.

Last season, Barça handed Arsenal a 5–1 aggregate loss in the round of 16. This season, the Gunners are already 5–1 behind Bayern ahead of the second leg. Their run of early European knockouts isn’t stopping this season, for sure.

However, in Barça, Wenger can point to the fact that round of 16 mishaps tend to happen not only to his own club, but also to other clubs. Barça went to Paris as favourites to win the Champions League altogether and came back with a less than 10 percent chance to even make it past the round of 16 after a 4–0 defeat.

For Arsenal and Barcelona, the second legs of their last 16 ties come about in early March. Those games can be followed with live football scores at SBAT, but it is unlikely they will taste anything other than defeat at the end of those games.

After some incredible efficacy on Paris Saint-Germain’s part on Tuesday evening, Barça and Arsenal find themselves in the same boat a day later. One that will take them home after a failed Champions League campaign. There isn’t any coming back after four-goal defeats in this age, or any age. Even Super Depor in 2003/04 had a less daunting task.

While negativity isn’t in short supply at both Arsenal and Barcelona, there are worse things than being ousted inside the first leg of a two-legged European tie. Leicester City are facing relegation after winning the Premier League last term, Bundesliga ever-presents Hamburg are struggling to stay top-flight afloat, which is also the case with two-time Champions League runners-up Valencia.

With the scale of both Arsenal and Barça, the meltdown after their respective car crashes takes a far greater dimension, but there is still quite a lot to play for both clubs from now until the end of the 2016/17 season.

It is only mid-February now, while the season runs until the last weeks of May. Here is an assessment of what Arsenal and Barcelona have left of this season, as well as what lies ahead for them.

Arsenal trail the Premier League leaders, Chelsea, by 10 points with only a third of the season remaining. While challenging for the title looks unlikely, Champions League qualification might still rescue what has been a season riddled with inconsistency and mental breakdowns.

That, keeping in mind the overall strength of the top end of the league, should be an achievement in itself. Furthermore, there is also the matter of keeping Wenger’s record of securing consecutive top-four finishes intact.

Barça, who are hunting a hat-trick of La Liga titles, are better placed than Arsenal, yet in Spain, nothing but first position helps. Fierce rivals Real Madrid lead the Blaugrana by a point and two games, which can be loosely interpreted as six points since Madrid don’t drop too many points. Los Blancos have dropped 0.55 points per game this season, compared to Barça’s 0.81.

Arsenal have won two of the last three FA Cups. They are alive in the world’s oldest football competition, face Sutton United in its fifth round, and are among the favourites to finish as its winners.

Barcelona, meanwhile, have Deportivo Alavés, whom they beat 6–0 before their accident in Paris, standing in their way of a third straight Copa Del Rey triumph. Easy meat, presumably.

As it stands, there is quite a lot for both Arsenal and Barça to play for this season to be overly bothered by their respective Champions League humblings.

“Signings have not convinced and the ecosystem does not comfort,” wrote Sid Lowe in the Guardian in the aftermath of Barça’s defeat in Paris.

There are different ways to look at player recruitment, among them three factors stand out: initially, money spent and age of the player, and results in the final third of the season.

For Arsenal, Granit Xhaka, Shkodran Mustafi and Lucas Pérez represented a summer of good spending. People were led into believing that, with Xhaka and Mustafi’s addition in particular, Arsenal upgraded the spine of their team. But, come mid-February, it is Xhaka and Mustafi who fail miserably in the cauldron of the Allianz Arena, bringing about a collapse that seems all too familiar for Arsenal.

Likewise, Barça seemed to have freshened up with five new, young signings in the summer. Yet, six months on, none out of André Gomes, Paco Alcácer, Samuel Umtiti, Lucas Digne and Denis Suárez qualifies as a success.

The upshot now is that unsatisfactory results have rendered all those once-promising set of new recruits failures. At Barça, the pressure is far more than Arsenal, but its designs are similar. Humiliations in Europe will prompt more signings next summer, but new arrivals hardly guarantee immediate positive results.

What next for the managers?

Patience isn’t a trait that fans or boards of football clubs possess. Arsenal’s remarkable 20-year association with Wenger is an anomaly in the modern day, but we could be seeing the last vestiges of that association.

Arsenal have stood still for many a year now, as evidenced by their annual round of 16 exits. Treading a new path may be the best way to stop the rot that has set in. To be among the top eight richest clubs in world football and fail to break the last-16 ceiling in Europe is a significant blot on Wenger’s time at the club.

The 67-year-old Frenchman’s current contract ends at the end of this season. Whether Arsenal deem it safe to change direction by dispensing with Wenger remains to be seen, but their long marriage has become more inconvenient with each passing year.

Unlike Arsenal, firing a manager is what Barça have been known to do quite often. “This is the end for him,” was Lowe’s verdict on Luis Enrique. That suggests the Asturian’s race at the helm of Barça is run, which should ring true at the end of this season.

The increasingly estranged Enrique has nowhere to hide. Johan Cruyff and Louis van Gaal survived after 4–0 losses in Europe; the former because of his high regard at the club, the latter because of his Cruyffian blueprint and ideals.

Enrique has neither Cruyff’s aura nor Van Gaal’s direction of thought. With the names of Sevilla’s Jorge Sampaoli and Tottenham Hotspur’s Mauricio Pochettino being bandied around, the end is nigh for Enrique.

It still doesn’t feel like the end of an era for this Barça side, while Wenger increasingly looks like he has overstayed at Arsenal. Going forward, a retooling at the top is the onus for both clubs. They still have to play their round of 16 second legs, the results of which are almost foregone conclusions.

Discussion: Champions League aftermath and what the future holds for Arsenal and Barcelona