Search
On FM Scout you can chat about Football Manager in real time since 2011. Here are 10 reasons to join!
Home › Articles › Opinion › CM / FM Nostalgia ↓ 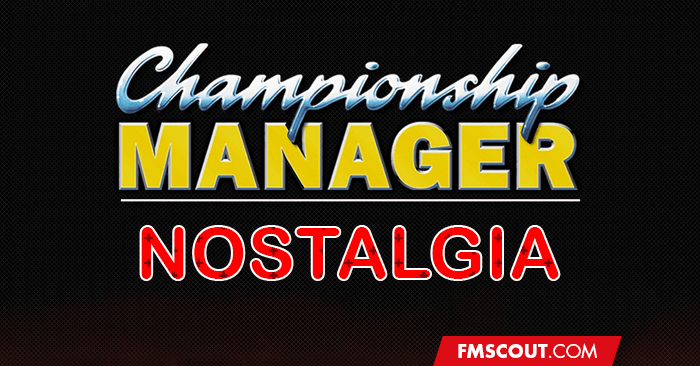 On September 1st, 1992, the football world had changed, right under the noses of every football fan alive.

Touted on the cover as "the most realistic football simulation ever," Paul and Oliver Collyer had brought life to what at first seemed like a crazy idea and a little bit of fun into a worldwide phenomenon in their university dormitory. Championship Manager had been born.

The game had initially been released on the Commodore Amiga and Atari ST (young people take note) and was initially turned down by Electronic Arts to release the game. Subsequently, the game's initial release was solid at best, but not outstanding. It wasn't visually pleasing and received a lot of criticism in its early days. In the 1993 game, the implementation of a real-life player database and a lot of other new features such as more match commentary, the introduction of the Premier League, player awards, injury time, foreign player restrictions, reported improved loading and saving times, and most importantly more background pictures!

These hadn't been implemented by rival management games at the time, and combining this with the ability to install the game on a Windows PC made this the breakout game for the Collyers.

Data update discs followed, and the game had gained a very large following in the UK. This version featured the first two "cheat players", a striker and a defender were implemented automatically at Cambridge United in Division 3 at the end of the first season.

The game continued to be released in series, with CM2 containing 96/97 and my personal favourite, 97/98 (I will be writing about this game a lot). CM3 followed, with 99/00 and 00/01 as well as the other game I will offer coverage on; the game considered to be the biggest Championship Manager game ever, 01/02. CM4 and 5 followed, but the games released never looked like reaching the hype that the final instalment in the CM01/02 reached. Eventually, the Collyers deemed the game unfit to be handled by current owners Eidos Interactive and they split off into their own department; Sports Interactive.

However, Eidos held onto the rights of the name Championship Manager, so SI was forced to name the game Football Manager. This decision sparked the most iconic football management game to date. Databases, patches, skins, tactics and the works followed, but most of all, FMScout.

The new FM games included press conferences, 2D and eventually 3D graphics, custom manager appearances, player profile images, a more in-depth tactics engine, the ability to use certain styles like the illusive “Gegenpress”, as well as seasons to take 50 times longer than the classic games. That is no exaggeration.

Meanwhile, CM0102 and CM9798 continued to purr along with the help of their respected forums; Wordpress blog cm9798.wordpress.com, and CM0102 vBulletin forum champman0102.co.uk, both of which I am a member.

One of the biggest things that drew attention to the CM0102 website was the fact that every 6 months or so, the dedicated update team released an up to date database. This has been a tradition since 2005, with some of the members registered back then still regular posters to this date.

The site and its members have been through many events, good and bad since its birth, including eBay content thieves. The Wordpress guys release tips and tricks, as well as their CM9798 Club World Cup-style competition, not to mention the two books written by server owner David Black.

As they say, one thing leads to another, and as I discovered the history of how the Championship Manager series evolved into Football Manager, I discovered FMScout.

Over the course of time, I will create a time capsule for those interested in reminiscing the past; what built Football Manager as we know it? I'm here to answer the questions you may have about the foundations of FM.

From technical support to whom to buy, where to scout, which tactics work best, tools to edit your game, tips and tricks, easter eggs and of course I'll help discover the hidden gems from the classic games.

Let's go back in time and investigate two of the most important games in FM History. Let's waste some hours again, fascinated by a bunch of flashing text. I hope that, under my guidance, you will enjoy a nostalgia session with Championship Manager.