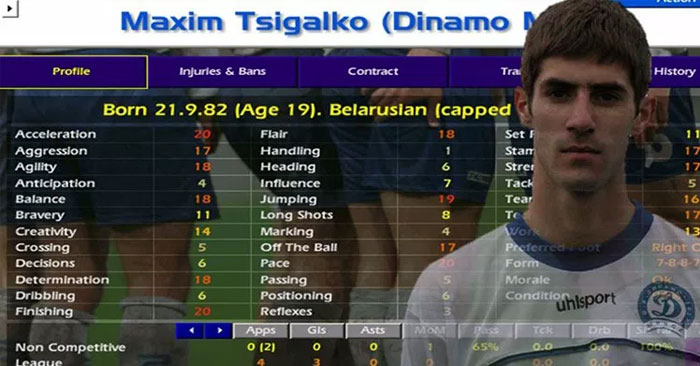 Maksim Tsyhalka (spelled Maxim Tsigalko on CM 01/02) is one of the most prolific strikers in the history of Championship Manager. The Dinamo Minsk wonderkid could score more than 100 goals per season and you could sign him for roughly £1M or thereabouts.

In real life, after a couple of promising seasons at Dinamo Minsk and 2 international caps (1 goal), Maritimo took an interest and invited him for a trial. Sadly in one of those training sessions, he suffered a very serious injury and was forced to return home. He made efforts to carry on playing, but the pain was too much. He retired 3 years later, aged 26.

Nowadays the ex-Belarusian international is struggling to get by with his family.

Here are some of his quotes from a recent interview (earlier this June).

Nobody informed me about the game, because nobody knew the game in my country back in the day.

I firstly learned about how good I was at the game, when a Russian journalist told me so, and I was really shocked.

I didn't know the game existed, so I just laughed. Later on, I realized that I could gain much money off it, but it was really late.

When I was 23, I had a serious injury, and I had to retire from football at the age of 26.

Then I started working as a construction builder for 5$ per day, and later for 20$ per day. I was really tired of struggling. My back and my legs couldn't withstand such a heavy job and I had serious health problems.

When I retired from football, nobody offered me a job. Nobody called me. I have 2 kids, and the only thing I want, is to have a job, so I can stand up, and be a good father.

Please inform the people that I really need your help.


Quotes were translated from Greek by Nikos Bovolos.
He has taken the initiative of starting a petition in order to help Maksim find a job at Sports Interactive if possible.

Important: We have no intention of laying any responsibility on Miles Jacobson and Sports Interactive to get involved in another person's life and give Tsigalko a job. We simply felt obliged to raise awareness of the situation, hoping this could be an opportunity for SI (or some other employer reading this).