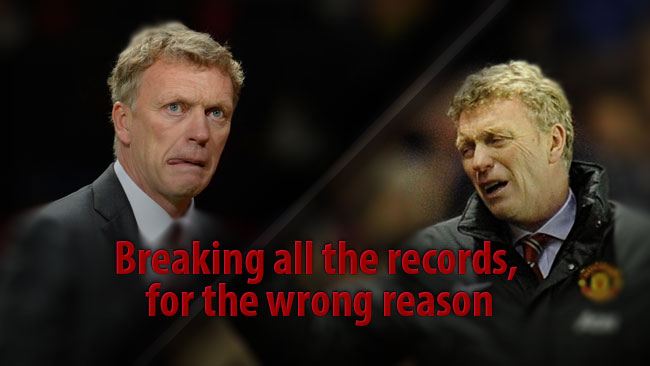 As a Manchester United fan, these past years have been absolutely insane. We had the best manager in the world and won many trophies. We were the best team in England and we were a force to reckon with.

Being a Manchester United fan back then was great, you'd watch every match expecting to win and see exciting attacking football, with many great players on show. You'd see so much confidence within the team that they would just play their own way against the best teams in Europe they were that confident.

We all knew the time would come to see a new manager at Manchester United with a new style of play, but not like what's happening now.

We had many options. Jose Mourinho was 'supposingly' interested in the Manchester United job, a man with many trophies and a hell of a lot of experience with the big teams. However, who did we choose, no other than David Moyes.

Now don't get me wrong, Moyes was great at Everton. I really admired how they played and how far they got with a budget no where near as close to Manchester City's budget, but Moyes had no experience with what many would say as the 'big teams'.

It was a gamble. A huge gamble. Manchester United, the 'biggest club in the world' gambled. Not something you would usually hear huh? When Moyes was appointed, I was optimistic. Could a man without that 'experience' bring us many years of success like Sir Alex Ferguson?

Look at our recent results right now and that pretty much answers my question.

So what went wrong for Moyes? He had a title winning squad which won the like by 11 points and yet he couldn't even beat Fulham at home. Here are my views on what's gone wrong.


With clubs like Manchester City and Chelsea strengthening their team much more in the summer, every United fan knew that we would have to strengthen our weak areas, with midfield really standing out.

We were linked with Ilkay Gundogan, Cesc Fabregas, Marco Reus, but we were just LINKED with them, we didn't pursue or interest in them expect a few low bids for Fabregas which were easily declined.

We almost had Herrera, but another 'complication' saw us lose him on deadline day. A disappointing summer rounded off with a panic buy. Maurouane Fellaini for a price twice as much as what he was valued at.

This took its toll.

Our midfield was exploited and when Carrick got injured, we just couldn't cope. Take the City game for example, they won as they exploited our midfield and were one and one with our defence, which with the players City possess, is suicide.

Moyes got it all wrong, a huge disaster for Sir Alex Ferguson's 'successor'.


So we had a bad summer yes, but we still possess many great players in our team. For example, Vidic and Ferdinand, our defensive rocks, had many clean sheets last season when they started together.

Moyes however, likes to 'experiment' and hardly ever started them together, causing bad communication in the back line allowing 'cheap' goals into our net.

Our midfield... boy where do I begin? TOM CLEVERLEY. Why is he even a United player?? My local team Stockport County (who are in the Skrill North) possess better players than him! And yet our friend Moyes likes to start him... A LOT. And yet Shinji Kagaws (#FREESHINJI) is left on the bench countless times. God Moyes, you need to learn.


A managers job is to encourage the team regardless on where they are in their league standings, whether it be in the changing rooms or in an interview, however Moyes doesn't do this and says things that as a manager you should never say, take this for example:

Post-match vs Stoke away:

"We created numerous opportunities, we must have got to the byline eight or nine times, and then we lost to a massive deflection and a world-class strike from nowhere. It was our own fault we didn't take our chances, we contributed to our own downfall there, but I felt there was not an awful lot we didn't do well."

I've made a few points clear from that interview, lets start with the quote "It was our own fault we didn't take our chances." After the stoke game, yeah we didn't take our chances, but after a loss like that you can't really say that about your team. We had bad morale and Moyes worsened it. He could have said that we were unlucky not to score or their goalkeeper played immense (which he did).

The clock is ticking.


After our loss in Greece, Moyes came under so much more pressure and as the sub title says, time is ticking and Moyes doesn't have a lot of time left to sort out our season. He needs to re-think his tactics and bring back Mike and Rene as they were vital to us.

Moyes doesn't have long left and if something isn't sorted out, this could well be the start of the downfall of Sir Alex Ferguson's legacy.

Thank you for reading this article. There may be some things you disagree with, and if so, please comment and let me know your view on this matter.

Discussion: David Moyes - Breaking all the records, for the wrong reason.