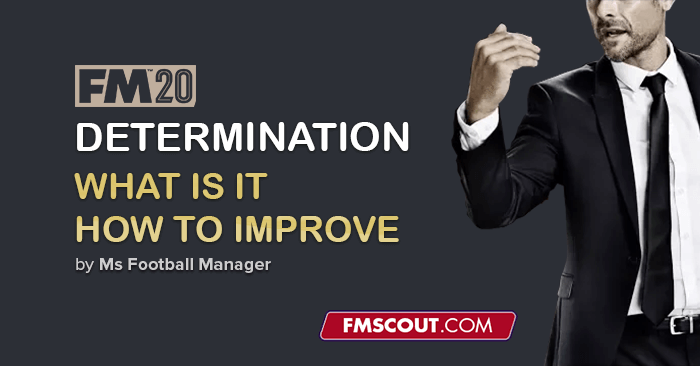 Determination in FM20 – What is it and how can I improve it?


There are certain attributes in FM20 that are still an unknown to many people. One of them is determination. It is one of those attributes that is, one could argue, one the most important attributes in the game.

For example, what point is there of having a team of wonderfully technical players if the just cannot be bothered to try hard when they go 1-0 down?

Wouldn’t it be better to have a team full of less technical wonders who will run into the ground and chase every single ball, no matter the score, until that final whistle sounds? I know which team I would rather manage.

So how do we measure determination, and can we influence it?

When I look at the most common questions to do with determination, they tend to revolve around two things:

No obviously these two points are two parts of one observation and question.

How do I manage my player’s determination attribute?


The answer is simple, if not somewhat straightforward. The simplest way to manage their determination is to play them in the First Team. Give them game time.

If you think about how you would feel sitting on the bench every week or worse being made to turn out for the reserve team, would you be inclined to show determination? This is a general statement and I expect certain players won’t be unduly influenced by not playing often.

But outside of playing them, what can you do to manage their determination levels? You cannot train for determination…. Or can you?

Mentoring plays a part. Stick your players into mentoring groups with on or two determined players and you may see improvements over a period of months. However, as with all things, bad habits can be mentored as well as good ones so approach with caution.

The truth is I don’t know, but I can’t see that it would be a negative. Better run training should lead to happier players who are hungry for success. And whilst I think of other factors, what about team talks and press conferences??

One last thing to consider with regards to determination, is where a player is in respects to their career.

If you have a young whippet joining who is hungry to play for your club and win trophies then their determination, given the right circumstances should improve. But if they are a 33-year-old who is simply finishing their career in the lower leagues, well I think it would be fair to assume that the old determination may not be what is was before.

Let me know your thoughts. Has anyone ever tested ways to see how, or if, determination can be affected by different factors?

Discussion: Determination in FM20 – What is it and how can I improve it?