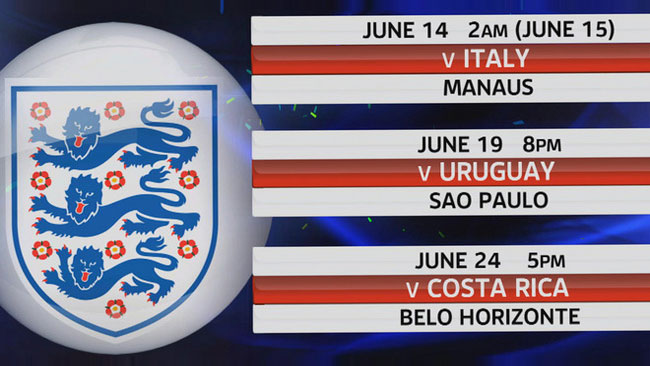 England are gearing up for what should be a fairly successful World Cup campaign this summer, but will have to get some good results and call on some of their better players in order to do so. It will be tough for them to progress from their group, having been put alongside Italy, Uruguay and Costa Rica in Group D.

The Three Lions' trips will take them across Brazil, with each stadium highlighted by leading car hire firm Hertz in their infographic below.

What a game to kick off their World Cup campaign - England will be plunged right into the action in their first game in Brazil. Roy Hodgson's men must outplay Italy in one of Brazil's most humid areas. Italy may not be used to the climates either, so it could be a great spectacle, or the exact opposite. The two teams will either go all out for a win, or be so taken aback by the humidity that they will run themselves out of steam. Both Hodgson and Cesare Prandelli will have tried to get the players accustomed to the climates, but only time will tell if this has worked. The last time these two sides played competitively, England were sent out of the European Championships (2012) in a penalty shootout.

England may have grown slightly more accustomed to the heat following their first match against Italy, but Uruguay will be a different level of challenge altogether. Not only will they be used to the South American climates, but they also have quality players such as Luis Suarez and Edinson Cavani who could put England to the sword even in a different climate. The stadium is home to Corinthians, where star midfielder Nicolás Lodeiro plays his domestic football, so he will really be in his own backyard. The last time the two sides met competitively was the year in which England won the 1966 World Cup - the match between these two sides ended in a 0-0 draw in the group stages.

These two sides have never met, but England should be confident of a comfortable victory, with the only real threat of Costa Rica being Arsenal's Joel Campbell, although I cannot see him threatening too often with the quality of the team alongside him. The Costa Rican may well be accustomed to the climates, but this should not matter, and England will be disappointed if they come away with anything less than a win.

If England are to progress from the groups, they will then go on to face either the winner or runner-up of Group C, depending on the position in which they finish. This means that they will be up against one of Japan, Colombia, Ivory Coast, or Greece.