Close your eyes. Think of the first thing that springs into your mind when I say the word Switzerland. Toblerone? Swiss army knife? That time you knew that they were the only European country with a square flag and won the local pub quiz?

For me, my mind is instantly drawn to the countless FM-hours spent trawling through the youth intakes of clubs like FC Basel, BSC Young Boys and FC Luzerne, amongst many others. I suppose if I had to think of the first thing that pops into my mind, it would be potential.

Whilst the Swiss don’t possess a particularly distinguished C.V. when it comes to international football, they have been inside the top 20 of the FIFA men’s rankings for the past decade (reaching as high as #8 between 2017-2018).

Considering that they have one of the smallest populations among the European teams of a similar ranking (only Croatia, #14 and Wales, #17, can boast a smaller populous), this is no small feat.

So what pedigree do the Swiss have when it comes to the Euros? Well in short, the answer is not a lot. In fact, they had never qualified for the tournament before 1996 when they were drawn in Group A alongside tournament hosts England, Scotland and Netherlands.

Their solitary point came by way of a 1-1 draw against the hosts at Wembley thanks to an 83rd minute Kubilay Türkyilmaz penalty after a Stuart Pearce handball. After failing to qualify for Euro 2000, the Swiss put together an impressive qualifying campaign only to be drawn with another tough group.

This time it was France, England and Croatia who they would meet in Group B. They left with the same points total that they had mustered eight years previous with their only point coming from a dull 0-0 against Croatia.

Euro 2008 would be a completely different experience for the people of Switzerland and its national team. They were awarded co-host status with Austria and, as such, did not need to go through the qualifying process.

After being drawn in Group A with Portugal, Turkey and Czech Republic, the final squad was announced and was full of more household and recognisable names such as Johann Djourou, Phillepe Senderos (both at Arsenal) and Gelson Fernandes (then at Manchester City).

Comparing this squad to ones that had come before them, it was clear to see that less players were being chosen from The Swiss Super League, with many of the squad being taken from across teams in major European leagues - a sign that Switzerland was beginning to produce players of a much higher quality.

With that being said, they again failed to make it past the group stage but did manage to win a game thanks to two goals from icon Hakan Yakin earning them a 2-0 victory against a very good Portugal team - clear signs of improvement, surely? Not exactly.

Despite a decent showing in the 2010 World Cup and beating eventual champions Spain 1-0, they failed to qualify for the 2012 European Championships after a disastrous qualifying campaign.

Fast-forward to 2016 and with new head coach Vladimir Petkovic at the helm, Switzerland were drawn in Group A with Albania, France and Romania.

They were unbeaten during the group stages after a 1-0 victory over Albania, a 1-1 draw with Romania and a 0-0 draw with France seeing them finish in second place and setting up an eventual defeat on penalties with Poland in the first knockout round.

The squad for this tournament would feature some stand-out names amongst the FM community with the likes of Breel Embolo, Ricardo Rodriguez, Granit Xhaka and Xherdan Shaqiri offering a bright future for the national team. 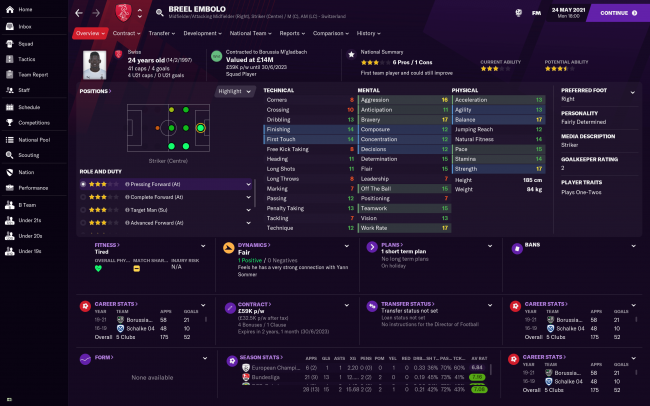 So what chance do Switzerland have of making a meaningful contribution to this summer’s tournament?

They are in Group A alongside Italy, Turkey and Wales and their primary goal will be to secure a first or second place finish but will be buoyed by the fact that even if they finish third, they could still progress to the knockout stages.

This Swiss squad will likely see themselves as more talented than Wales, around a similar level as Turkey and want to put on a good showing against group favourites, Italy.

With all this in mind, it would be fair to say that the minimum expectations of Petkovic’s men is that they progress out of the group and put in a good performance in knockout stages - a target that a squad of this quality should be easily be able to meet.

Writing this piece inspired me to take on the challenge of finally achieving European Championship.

I started a new save with the idea of choosing the same pool of players that Vladimir Petkovic has chosen (with the exception of Manuel Akanji, who was suffered an ACL tear just before the competition) and seeing how deep into the tournament I could take them.

The 12th of June arrived and I was ready to ensure we started the tournament by picking up three points against a Wales side lead by Gareth Bale. Sadly, we couldn't take all three points and had to make do with sharing the spoils after a 1-1 draw.

With our next game being against an extremely strong Italy side, we needed to regroup, dust ourselves down and give it our all. 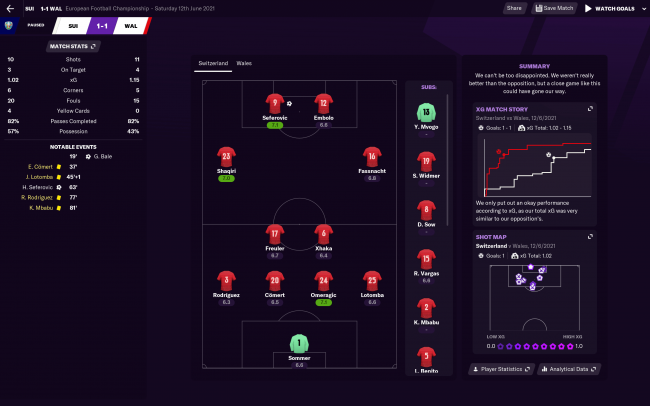 A frustrating 2-0 defeat by the Italians was coupled with Wales beating Turkey leaving us in third place and relying on results elsewhere and us needing to take all three points against a winless Turkish side during the final game of the group stage. 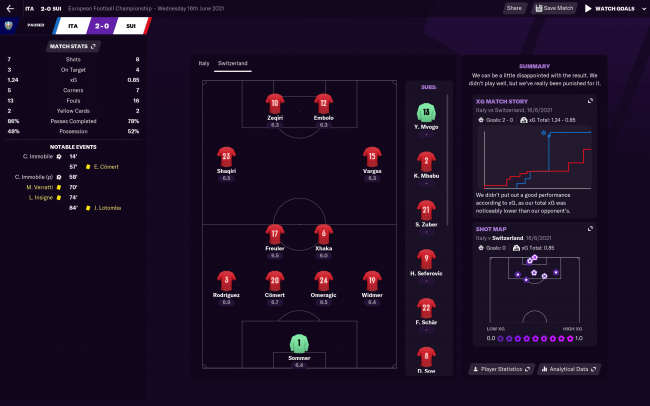 We put in a much-needed improved performance and got out with a 2-1 win against Turkey. Vargas picking up a red card after seeing yellow two times in the space of fourteen minutes being the only negative aspect of the game.

Finishing in third meant that we had a nervous wait while the other groups played out their final round of fixtures to see if we would qualify for the knockout round. We got the news through as soon was the full time whistle blew in the Group F fixtures.

We’d made it through and would be pitted against the winners of Group D, Croatia. The headlines would say that Croatia were victorious but that would not tell the full story. To have more shots, more possession and a higher xG against the runners up in the previous World Cup was a great achievement but, ultimately, we didn’t take the chances we had and were naively beaten on the counter.

Croatia, lead by the wily Luca Modric orchestrating from the middle of the park, would be moving on the the quarter finals to face the eventual winners, Italy. Thank you very much for taking the time to read this piece and if you would be interested in hearing me complain about being an Everton fan or if you have any writing opportunities then you can find me on Twitter (@OwenDeAsha).
I would also like to extend my thanks to The FM Network (@The_FMNetwork) for allowing me to cover this Swiss team.
Go ahead and make sure you check them out for some amazing quality FM content.