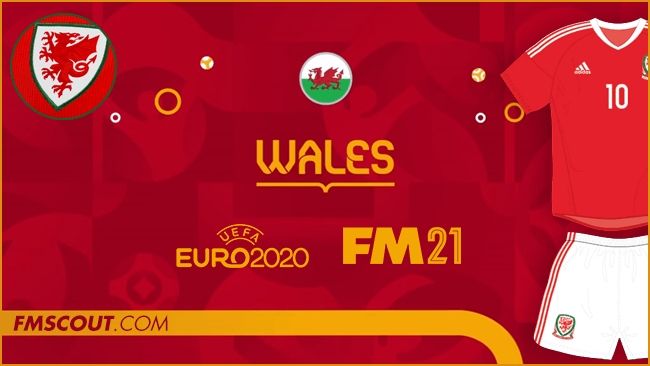 Good morning/afternoon/evening folks! As part of FM Database’s review of the EURO 2020 tournament, I’ll be doing an analysis of the Wales squad.

The Dragons had a terrific run last time round, marking their first experience in the knockouts with a joint 3rd place spot, sharing this with World Cup holders of the time Germany.

2020 will be their second consecutive EURO knockout qualification and they’ll be hoping with the help of some returning experienced players, along with a wealth of promising rising talent, they can reach these heights once more – if not improve on them.

Wales have a rich history in international football, and can boast having the 3rd oldest established national team in world. The passionate fans have a long-standing rivalry with England, and this year’s tournament provides another opportunity to better their fellow Brits.

Whilst The Cymru Premier is the country’s national football league, the higher profile teams have traditionally played in the English Football League, namely Swansea City, Cardiff City, and Wrexham; it’s within the EFL that you will find the majority of the national team playing club football.

Rob Page takes the team into the EURO’s continuing his role as caretaker manager, a position he took up back in November.

His 8 matches in charge so far (at the time of writing) have returned with 4 wins, 2 draws, and 2 losses – which will no doubt give him and fans alike some confidence heading into the Group stages.

Page’s preferred formation is a 3-4-3 – where he employs wing-backs and inside forwards down the flanks, and his preferred false-9 taking up the central role. I’m going to take a look at the key 11 he’d be expected to field in this formation, and also what we could see with an alternative 4-2-3-1 lineup.


One question that will remain regardless of the formation is who Page will choose as his No.1 throughout the tournament. Hennessey is Wales most capped goalkeeper, however faces competition this year from Danny Ward.

Ward has seen himself established as the first choice going into the tournament, after a solid set of performances since taking the gloves off the back of Hennessey’s October injury.

If Page is to go with his preferred 3-4-3 formation, it’s likely we would see a back 3 compromised of Davies, Rodon and Mepham, with Nico Williams and Connor Roberts taking the left and right wing-back roles respectively.

Equally with a 4-2-3-1 we could see a back four compromised of Davies, Rodon, Mepham, and Roberts.

The midfield boasts some options for Page to get creative – more experienced players like Allen and Ramsey will be looking to start, however the former could be pushed for his position by an in-form Morrell; Ethan Ampadu will also be one to watch, as if fit, he can really bolster the midfield’s defensive capabilities.

Where Page will really be spoilt for choice is his attacking options. With his likely 3-4-3 we would expect to see Bale taking the right inside forward spot, with Dan James occupying the left.

Through the centre, as mentioned earlier, Page will likely employ a false nine; a likely option for this role would be Liverpool’s Harry Wilson, although Ramsey could also make an interesting presence in this spot. Kieffer Moore and Tyler Roberts are there as well – providing Page with a wealth of options should he fancy a rotation.

Gareth Bale – The Wales captain was one of the heroes of the last tournament, and eyes everywhere will be on him to see if he unleashes the form we all know he can be capable of.

He enjoyed a return to regular playing time with Tottenham in the 20/21 season, where he enjoyed a 21 goal involvement from 38 matches. On his day, and indeed most others, Bale can be a match winner – Page will be hoping he can make all the difference.

Aaron Ramsey – The Juventus midfielder is now a seasoned pro, and will be looked towards to provide experience to the relatively young squad.

He can pull all the strings in the midfield when he is in his zone, and gives the midfield reliable offensive and defensive qualities – while providing the cool headedness that comes with his international experience.

There are a few other players I will be keeping my eye on through the tournament that are capable of something special given the right elements.

Daniel James, Tyler Roberts, Ethan Ampadu and David Brooks are all young players of immense potential, and hopefully with the guidance and influence of the more senior players, these will seize the opportunity to build their names on the world stage.

Bookies have Wales’ odds ranging anywhere between 125/1 - 235/1, meaning that they’re definitely considered outsiders for this tournament, which is likely a reflection of the tough group they find themselves in – with Italy, Switzerland and Turkey.

They were however 80/1 in 2016 and ranked outsiders that time to – showing that getting the best out of these players could see the Dragons pulling off another shock this year.

If you enjoyed this write-up, you can find me on Twitter @JDConnor93 where I’ll be planning some further writing on more things football in the near future.