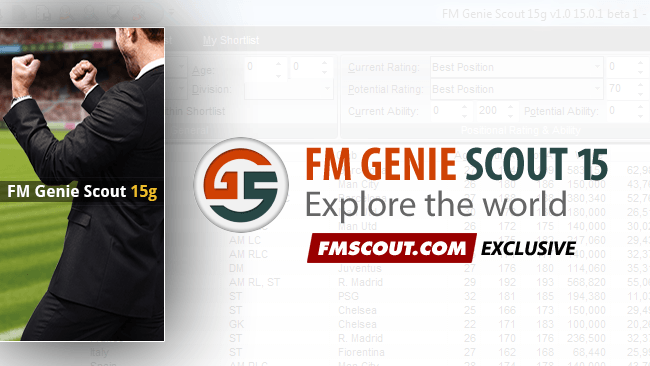 We are delighted to announce that we will be eventually releasing Genie Scout 15! Eugene is already working on the new version for Football Manager 2015.

We are honored to be exclusively releasing this awesome tool since 2009. We try our best to deliver Genie Scout to the world every year because your support to this project is outstanding.

The biggest change in Genie Scout 15 is the update of roles and duties (91 available in total), as well as the update of the rating system according to the important attributes for each role which have changed for FM15.

Here are a couple of screenshots:

Public edition
We won't make any promises on the release date of the public version, but most likely we'll be able to release it during November.
Update - 27 November: We're pleased to announce that the public version will be released this weekend, either on Saturday (29 Nov) or Sunday (30 Nov).

"g" edition
The "g" edition, which is the one for people who donate, is available since 27 October (beta 1). Current version (beta 6) is compatible with the latest 15.1.4 update.
Reminder: The "g" edition is ad-free and has a few extra features compared to the public edition.

You can now donate for GS15 "g" edition.
Do not report bugs in the comments below!

You will receive an email with the download link to the first Genie Scout 15 beta version of the public edition a bit earlier than everyone else. Why miss a single hour though? Signing up for our newsletter is free!

100 comments have been posted so far.