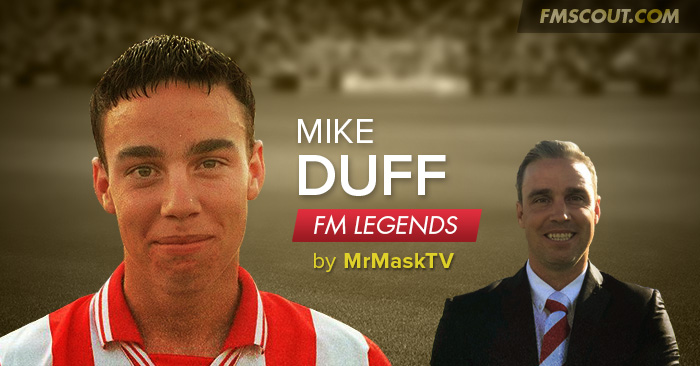 Michael Duff won’t mean much to football fans unless you are a Northern Irish Burnley or Cheltenham Town supporter. That’s because Michael is grown-up; for a manager, Michael is a name which begs to be taken seriously. Which is just as well because Mike or Mikey Duff had all the fun going on Championship Manager.


Duff was a rarity; a solid pro in a gaming world. As a right-back, he was as unfussy as his name suggests. He starred, if that’s the right word, for Cheltenham Town back in CM 01/02 with a price tag which doesn’t even cover a day’s wages for the elite players.

His key quality was an ability to play at every level, whether it was for the Robins or in the Bernabeu; Duff was unfazed and just got on with his job. Rather efficiently, as it happened. He consistently turned in averages of 8 and higher, leading by example in my RAM-driven mind’s eye.

He was a leader of men, with the key attributes demanding he be handed the captain’s armband. This was in the days when wearing the armband meant something. Acceleration, agility, jumping, marking, off the ball, pace, stamina, tackling and teamwork; all of them hit 20 with ease, giving longevity to Duff’s CM 01/02 career.

Not only was Duff a great defender, he chipped in with plenty of goals. If your budget didn’t stretch to a Neville or Lahm, Duff held his own and kept his head, taking an excellent penalty. 
Which pretty much mirrored his playing career. He never reached the heights of the elite clubs but played in the top six divisions of English football, from the Southern Premier division with Cheltenham Town through to League One and from the Championship to top flight in the claret and blue of Burnley.

720 club appearances underline the stalwart Duff was; 24 international caps confirm there was more to the Northern Irishman than just putting the ball or man into Row Z.

He never scored as frequently in professional football – 23 in total – as in CM 01/02 but I have no doubt he went on to have a great managerial career when he hung up his cyber boots. Duff took the first steps on that trail when he took over as boss of Cheltenham Town during the summer of 2018.