Search
On FM Scout you can chat about Football Manager in real time since 2011. Here are 10 reasons to join!
Home › Scouting › FM 2013 Best Players ↓ 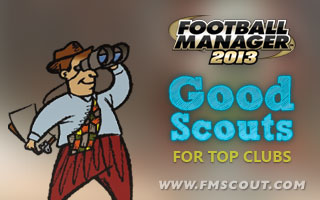 Scouts are one of the most important staff roles in Football Manager. Without them, you might never find those gems from Peru or other far-flung places, and miss out big time.

There are loads available, although obviously, this game being as frustratingly realistic as it is, some won’t come to you for whatever reason.

This guide will aim to provide you with a range of top scouts, and although there are loads of free agents who are brilliant, there are many other scouts who you are going to have to shell out for, but thankfully there are some real hidden gems.

These won’t always be scouts by trade, but will definitely have the required stats to be a good scout for your team (usually 15+ in judging CA/PA), and will also have interest in being a scout. I should actually mention that these scouts are for big clubs from about Newcastle-level upwards.

All of these scouts have been offered contracts by my Real Madrid team as scouts, so these are the wages they want, not just predictions.

Click on the table headers (name, age, etc) for easy sorting.
You can also sort by multiple columns if you press and hold Shift while clicking the headers.

To make this list as extensive as possible, we need people to contribute with suggestions, which will all be taken into consideration, and if it isn’t put on the list, I will tell you why not. The criteria to go on the list is that the scout has to be 60 or less at the start of the game, and has to have judging CA/PA attributes of at least 15 for unemployed scouts, and at least 14 for already employed scouts, although if you have a scout with slightly lower attributes, but a very high knowledge, that would be a very useful addition to the list. So, follow that criteria and your suggestion will more than likely be included.