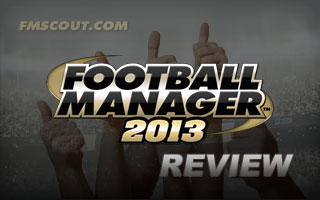 Football Manager 13 beta has been out since 19 October for select people (and those who have pre-purchased) and it's certainly an improvement from its predecessor. With the release of the full game on November 2nd, I will be reviewing this pre-release version with what's changed, the new additions and features as well as some flaws which should be fixed by Sports Interactive, come release day.


As Arsenal is my favourite team, I get subscribed to their news and if you noticed in FM12, they were always linked with Marouane Fellaini of Everton. In FM13's case, that special player is Guilherme Siqueira of Granada. Usually, most clubs are always programmed to be linked with that one player and FM13 is no different.

The first thing you see different is the black interface - the menu design is sleek and loading seems much faster. The home-screen (when you're a manager) is more organized and you can see all the important things in one spot.

On to the managerial parts, when you join a new club as a manager, not only do you get your expectations, a history of the club and the current transfers update but you actually have a meeting with the owner of the club as well as your assistant manager. There is a staff responsibilities option where you can decide which staff member does what ranging from making transfers to arranging friendlies to finding new clubs for transfer-listed players, though the user can do all this if they wish to as well by setting the option as the manager's job.

Some other new things I've found is now when you click on a player, there is a button which lets you "find similar players" which is quite handy and useful while along with the wages of a player in their description, there is also an "after-tax wage" shown. In backroom advice, rather than your assistants telling you to train a particular player in a position, they suggest to train the player based on their role such as a deep lying playmaker or box to box midfielder.

With loans, you can now decide the role you want given to the player you're loaning in order for him to get game time. I loaned Francis Coquelin to Aston Villa assigning him a first team role so he gets plenty of game time. When you sign a player, along with the usual bonuses, you can now offer an international cap bonus as well.

When you interact with the media, there are more conversation options to choose from as well as new questions from the media which is always nice, making the game seem more realistic.


In game – your assistant's thoughts and ideas will pop up on the side during the game and then fade out which is useful with him telling you which players are exhausted, whether the team needs to be more direct and much, much more.
Game-play has improved a lot - there are changes to the mechanics though one can't describe it clearly, it's noticeable; the movement, shooting and passing of the players are definitely different from FM12.

Transfer deadline day is more interactive as the manager can take part in it, answering media questions as well as his thoughts on certain signings and what not.

There are some flaws however such as when you're giving your reaction at halftime, some options might be shown twice or that the sound of the game might keep playing even when the game is over but these are well known bugs which as mentioned, Sports Interactive will take care off when the release of the full game is due. One other thing which annoyed me was in game, players choose to pass back to the goalkeeper on more than one occasion when there are better options sideways or up front.

All in all, FM13 is a step up - it will take some time to get used to the new layout but it's still enjoyable and as addictive as ever; here's to another year of sleepless night and work/classes being missed.