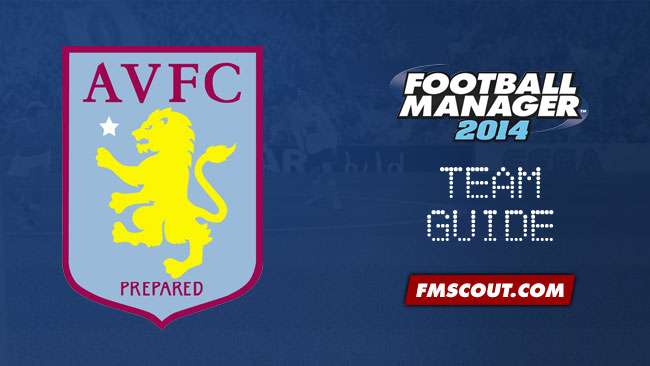 Aston Villa FC
Despite being classed as a 'mid-table team', Aston Villa are actually pretty successful in terms of staying in the top division. They have completed 102 consecutive seasons in the highest league in English football, and the 13/14 season being their 103rd. They fall just behind Everton who are now competing in their 111th consecutive season in the top flight. Throughout the 102 seasons, Villa have only managed to claim the title seven times, can you be the one to make it eight?

If you are looking for a team to start adding players to immediately, Aston Villa, is definitely not for you. The board offer you no transfer budget which ever objectives you wish to choose, as the wage bill is sky high. Offloading players will be the best, and probably only way of getting players in.

One of the most important things that you need for a successful career on Football Manager is a good tactic. Keeping one tactic throughout a whole save will not be very effective but here are just a few that should work ideally to start off with.

Tactic 1 - 4-1-2-2-1
This is the most 'fitting' formation for Aston Villa, as their best players slot in perfectly with the roles of the potions, as well as the formation itself being a useful one for a team of the Villains stature. With what could be a defensive midfielder in front of the back four, and two central midfielders above him, the midfield should be yours to dominate, however the two central midfielders will have to be hard working in order to work hard in the final third of the pitch, as well as back in your own.

Tactic 2 - 4-4-2
Nice and simple. This tactic used with the right team, which in this case is Aston Villa, can work wonders. Options down the middle and the flanks mean ultimate versatility in your attacks which can be a way to catch your opponent out. Definitely recommend against teams of the same quality.

Now that you have some strong ideas for tactics, you will have to make the tough decision of who to put into your starting squad. To make the decision, look at the tactic you have chosen and then take a look at the players position. However, do not rule out signing people because they do not fit the tactic. You may change the tactic and then the opportunity to sign the player may have passed. This is a brief analysis of all the roles you might wish to fill, and a look at your squad in general.

Goalkeeper- Stuck behind fellow American Brad Friedel is the other Brad, Brad Guzan. After Friedel's departure to Tottenham, Villa have had to look towards Guzan, and he gave them a huge response. The American has showed off his class in the net for Aston Villa on may occasions, and does so in goal. Being at the age of 28, Guzan still has a good 5 years left in the tank. Backing up Guzan, is Irish international Shay Given. Ex-Number one for Manchester City, Given has all the qualities of a solid goalkeeper. At 37 years old though, retirement will be right around the corner. Luckily Villa have got a gem in Jed Steer, 20 years old, and has potential to be a very good premier league keeper.

Left Back- The left back position consists of Joe Bennett, 23 years old, and Antonio Luna, who is 22 years of age. They are both first team quality, and young, so securing them both on long term contracts would be a way to go, before some other needy teams go in for them. Nathan Baker and Ciaran Clark are also versatile enough to switch to the left back role from centre back.

Centre Back- Moving on to centre backs, Villa have their clear back two. Dutch 28 year old Ron Vlaar and at only the age of 20, Danish international Jores Okore would be the best partner for Vlaar. As said before, Aston Villas defense are versatile and both Nathan Baker and Ciaran Clark can fill in for them both. Right at the back of the pile stands 24 year old Aussie Chris Herd. He can to play the centre half role, but would be mainly considered as a midfielder.

Right Back- Aston Villa only have two first team right backs. Their eldest is Alan Hutton Alan is your typical full back, strong, fast and an excellent tackler, but would only be considered replacement for the English international, Matt Lowton. At 24 years old he is best option for Aston Villa, and has a lot of time to progress.

Left Midfield- Andi Wiemann is the best choice for the Villains in the left midfield position. The Austrian is naturally a striker, but due to the lack of quality of actual left midfielders, Andi will have to make do. The same applies for English striker Gabby Agbonlahor as I said he is a striker, but can play in that left sided role very well.

Central Midfielders- 3 main central midfielders make up Villas midfield. Karim El Ahmadi is probably the outstanding playmaker for the midfield, with Ashley Westwood also a quality playmaker. However a bit of differentiation see's Yacouba Sylla being best working from box to box, these three midfielders work a treat in the advised formation '4-1-2-2-1'.

Right Midfielders- Over on the other side of the pitch should be Gabby Agbonlahor, again, not his natural position, but he is very capable of playing there. Finally we come to an actual winger, Mark Albrighton. He prefers playing out on the right side, and is a reliable back up to Agbonlahor assuming you start him.

Attacking Midfielders- Nicklas Helenius is the only player that is classed as an AMC in the game. He is a good player but a AMC role isn't the way forward for Villa. The likes of Agbonlahor and Tonev can also play there if necessary, but I advise a staying away from formations with attacking midfielders involved, unless you dig into the transfer market for ones that make it work...

Strikers- Aston Villa have arguably one of the most physical and pacey strikers in the league. Belgium Christian Benteke standing at 6"2' is the main striker in the team, ageing only at 22, he is a key player for any success Villa have coming their way. Libor Kozak, 24 years old, and can fill in Benteke's shoes if a break is ever needed for him. Andi Wiemann and Agbonlahor are also capable strikers upfront.

Position 1 - Attacking Midfield Having only Nicklas Helenius in the AMC role and a few others versatile playing there, delving into the transfer market will surely bring up someone who can fit in. If in trouble, a few players here may help. Alan Dzagoev currently contracted to CSKA Moscow would be a fantastic pick up by them club, 23 years old, determined and fast, a perfect fit for the Claret and Blues. If you prefer to look much much more towards the future, and don't like Alan's age of 23, then 17 year old Jon Williams from English side Crystal Palace will fit in brilliantly.