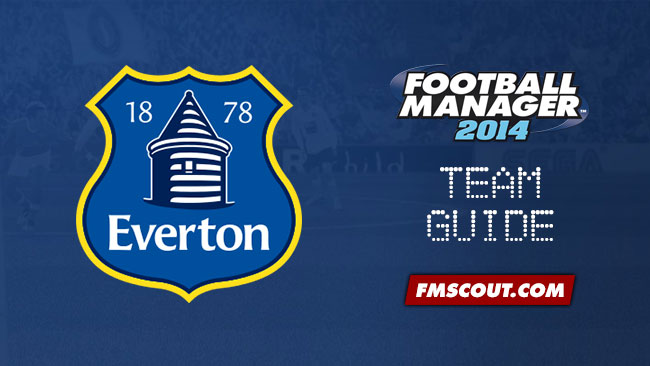 With Everton losing David Moyes to the mighty Manchester United, Everton soon appointed Roberto Martinez. The real question is can you better the job that Moyes did at Goodison Park. Everton are one of the few teams that could possibly challenge for top four on Football Manager 2014 if you go about the job correctly, this guide will hopefully help you achieve your goals with Everton.

Everton’s board will give you a healthy transfer budget from the beginning to spend on new players. The board offers you a £10 million transfer budget and a wage budget of £1million for a top half finish which is a good amount of money to work with for this goal. You can change the season expectations to a EURO qualification and get a transfer budget of £12.5 million or a Champions League qualification with a £13.75 million budget. For the 1st season, I would suggest going with the top half finish if you are new to football manager or have difficulties picking this game up. Remember on whatever achievement you choose you are judged on it.

Having tactics that work is the difference between being a good manager and a great manager. These tactics I’m going to list below are ideal to start off with but remember throughout a save you will not do any good by just using the same tactic.

Tactic 1 - 4-5-1 – Everton are not blessed with many forwards except for Lukaku who is on loan from Chelsea but he is definitely good enough and strong enough to start upfront on his own. Playing five in the midfield is solid for Everton as it crowds the midfield to your advantage with the likes of Ross Barkley and Gareth Barry in the centre of midfield. I would suggest using your two wide men in attacking positions this gets the best out of Kevin Mirallas who is a vital player for you.

Tactic 2 – 4-4-2 – The standard 4-4-2 is the second tactic suggested to you but using this tactic would need the signing of another striker to partner Lukaku as Steven Naismith is not up to standards. I would once again suggest using your two wide men in attacking mind sets and play with Gareth Barry and Ross Barkley playing in the centre of midfield but have Barry on a defensive mind set to help the back four.

Now you have some good solid tactics in place, you need to make the difficult choice of who you want to play in those positions, and where you may need to improve. Below I’ll list each position and give you a basic knowledge of each position.

Goalkeeper – The goalkeeper area for Everton is nothing to worry about when you start with Tim Howard being a very strong keeper in the Premier League and has been for many years. You have Joel, the 23 year old as backup for Howard. He is more than suitable for your second choice keeper.

Left Back –Leighton Baines probably the best left back in the premier league at the moment from the very start team such as Arsenal, Tottenham and Chelsea are all heavily interested in getting Baines signature. If you wish to cash in on him you will receive around £20/£25million and you will need a replacement instantly. Bryan Oviedo can also play at left back if needed throughout the season.

Centre Back – Everton Centre backs are also a strong point of the team with the likes of Sylvain Distin, Phil Jagielka and Antonio Alcaraz - all your main central defenders. You also have the likes of promising youngster John Stones. No need for new signings for this position, just do your best to keep your defence fit as you want to keep the back four the same as much as possible.

Right Back – Everton’s right backs are Seamus Coleman, John Stones and Tony Hibbert the strongest one being Seamus Coleman a proven solid right back with youngster John Stones being a good second choice for the position. I would suggest playing John Stones in as many cup games as possible to get him some important 1st team experience.

Right Midfield – Kevin Mirallas is the best right midfielder at the club by far play him in an attacking right midfield position and watch him get goals and assist he is a top player for Everton so play him to his advantages.

Centre Midfield – Centre Midfield is again full of solid players suitable, including on loan Gareth Barry and England’s upcoming superstar Ross Barkley. Use Gareth Barry in a defensive approach you will get better performances from this. You have a lot of talent still in this area including James McCarthy, Darren Gibson and Leon Osman all good cover for you.

Left Midfielder– Aiden McGeady and Steven Pienaar are the best choices for this position both good attacking players and should let them push forward whenever possible.

Strikers – Romelu Lukaku the ever so powerful and natural talent is by far your main striker and will score you a lot of goals if you’re giving him the chances. Steven Naismith for me is a must sell you will get around £3/£5million for him and I would put his sale fund towards a new striker that will replace Lukaku after your first season. Lacina Traore on loan from Monaco is a good youngster and can partner Lukaku well if you play two up front but again he will be gone at the end of the season so you should get a new striker early to break him into the team to replace them.

With every team, there comes weaknesses, and Everton are no different with the highly rated left back Leighton Baines targeted by the likes of Arsenal and Tottenham from the start you have a big choice of either cashing in around £20/£25million and find a replacement, or do all you can to keep him at the club. Romelu Lukaku is only on loan for the season but he is a great talent and a natural goal scorer but you need someone to partner him and someone who will take his place as the main forward after he returns to Chelsea. Steven Naismith is someone I would personally try and sell to get more funds for another striker.


If you have any questions, feel free to comment below.