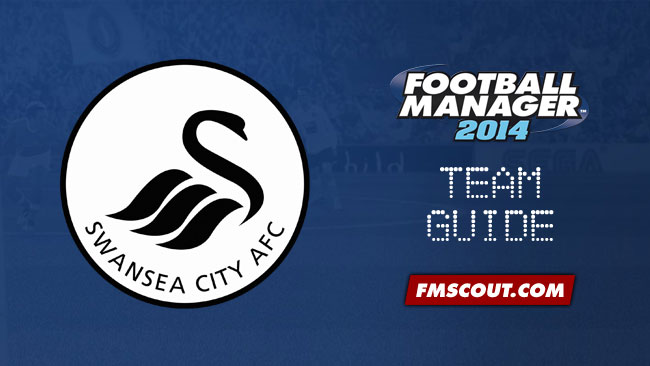 Before three promotions in eight years Swansea were on the brink of bankruptcy and nearly losing their league status.however a successful takeover since , has led them to the Premier League where they finished 11th place, missing out on a top half finish in their first season in the top flight.

They now lie in the top half of the premier league, and qualified for The Europa league by winning the Capital One Cup last season, and are the current holders.
They are a team that continue to push forward making vast amounts of progress.
League 2 football to Europa league football in just 10 years Is a fantastic achievement, and whether they can go further and take themselves to the next step... I.e. Champions league football, remains to be seen.

The minimum transfer budget you will get with Swansea is 3.9 million pounds, where as the maximum is 5.25 million pounds. So overall there isn't much to play with, maybe enough to buy one or two good little youngsters, but we'll move onto signings later. The wage budget you will get to play with should be around 30-45K maybe higher if you have told the board you can achieve greater things in the league.

I think the best way in using this budget, would be to sign current players onto new contracts (Preferably your best players) and try making some extra additions to your staff, in order to get better training for your first team and better products through your youth academy. At the moment, big name signings aren't important, youth should be priority at this point.

The goalkeepers department is fairly strong, Michel Vorm is a solid acrobatic goalie capable of saving almost anything put infront of him, while your main back up should be Tremmel who is a decent and experienced keeper although not good enough for first choice, Zabret, Cornell and Davis are the main young prospects for this area of the team although the three are all too young to enter the first team at this time.

Defence is also fairly solid area too, Chico and Williams should be your first choice centre backs they are the most experienced of them all, Vasquez & Amat are very good young backups and are a potential potential defensive pairing for the future.
Angel Rangel and Neil Taylor are obviously the first choice for the two fullback positions. Dwight Tiendallim is also another fullback who can be used for backup.
Ashley Richards, Kyle Bartley, Darnel Situ, and Ben Davies as the main defensive prospects, all of which should be loaned out to continue their development.

Midfield is probably the strongest part of Swansea's team, They boast the likes of Jonathon De Guzman, Jonjo Shelvey, Michu and Leon Britton. De Guzman should probably be used as a deep lying playmaker, he brings accurate passing and good vision to the side. where as Leon Britton would be a good choice for the defensive midfield role, the defensive minded player has a very strong tackle and isn't afraid to put a foot in. Jonjo shelvey can be given the responsibilities of attacking from within the midfield alongside Michu who should be played in the centre attacking midfield role just behind the striker. Henry Jones and Gogic are probably the only youngsters worth mentioning for this area of the team, though they're unlikely to become a first team regular.

On the wings (should you choose to use wingers) Nathan Dyer and Hernandez would be good options for the left and right side, the both bring speed and both know how to pass and hit the back of the net. Wayne Routledge is probably the best backup for Swansea.
Gwion Edwards is probably the only decent prospect on the wings in this Swansea side.

Up front, we don't really have any depth at all, although our main weapon would probably be in the form of Wilfried Bony who is able to feed off of the likes of Hernandez, Dyer and even Michu. He has a great strike and knows how to head the ball. If you are looking for a good backup striker, look no further, just see if you can bring back Danny Graham who is on loan at Sunderland. Rory Donnelly and Jamie Proctor are decent prospects.

My recommended formations would be as follows...

A, 4-1-2-2-1 if you are looking to use wingers and a defensive midfielder (recommended) I would use Leon Britton as your DM and have De Guzman and Michu in the centre of the park, but ultimately it's up to you.

Or, A, 4-1-2-1-2 if you're not fussed with wingers, but you want a defensive midfielder and an attacking midfielder. I would recommend using Britton in the DM role again with Shelvey and De Guzman in the middle, then leaving Michu in Attacking midfield who can feed balls through to the likes of Bony, Graham or anyone you sign.

Last but not least, Transfers! One transfer should be made to strengthen this team and that is if you cannot bring Danny Graham Back from Sunderland (as I said before, ultimately, it is up to you) to use him in the 4-1-2-1-2 formation, here is a list of players you could sign...

Swansea have many great talents, such as, Ashley Richards, Michu, Bony, Nathan Dyer and Vorm.
Maybe we could even include Pablo Hernandez and Chico Flores.
These are all very good players, all of which you should opt to have in your starting 11, if roles are set up right, these players alone will guarantee you a top half finish regardless of any signings.

- Alvaro Vazques, solid young centre back from Getafe should stop and scare many strikers off.

- Jernade Meade, is a left back who arrived from Arsenal on a free transfer, the 20 year old isn't the best Full back in the squad but should you find yourself with no option, he should be a good backup.

- Wilfried Bony, An Ivorian that arrived from Vitesse In the last summer transfer window, is a good, strong centre forward with a great header and powerful strike,. he should be your first choice striker, he is also good support for Michu as he was mainly up front on his own last season.

- Jonjo Shelvey, he is man many people will know, arrived from Liverpool for 5 million pounds, he is a good central midfielder and deep lying playmaker, he is a good option to start in the centre of midfield along with Leon Britton and Jonathon De Guzman.

- Alajandro Pozuelo, is a player similar to Jernade Meade, although not at all a defensive player, the central attacking midfielder is a decent young backup should you have no other option in his position.

- Alex Gogic, is a 19 year old versatile midfielder, he can play anywhere in the centre of the park, has potential to be a great player for Swansea.

- Gregor Zabret, is a young 17 year old goalkeeper, just like Gogic he has potential to be Swansea's first team goalkeeper in many years.

- Jordi Amat, another centre back from Espanyol much like Vasques from Getafe.
He is strong, young and will link up well with either Chico Flores, Williams or Vasques.

- Jose Alberto Canas, the oldest of Swansea's signings at 26 years old. He is an experienced defensive midfielder who came from Real Betis, he shouldn't be your first choice defensive midfielder should you choose to have one, that job should fall to Jonathan De Guzman.

Thank you for taking your time to read my guide to starting off with Swansea, hope this helped, any feedback is greatly appreciated