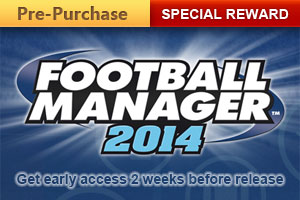 We are happy to announce that the pre-order for the digital edition of Football Manager 2014 (PC, Mac and Linux) has started on our official store.

Following the success of last year's pre-order reward, Sports Interactive decided to repeat the offer. So there's a very special reward for people who pre-purchase the game from our store – you'll actually get access to the beta version of the game 2 weeks upfront.


Pre-Purchase FM14 from fmscout.com to receive your special reward 2 weeks before the game releases!

What exactly is the FM14 pre-order?
Anyone who pre-orders (or pre-purchases) the game through our official store will be given a beta key which will allow early access to the game. The early access period will be around 2 weeks – so allowing people who pre-order to start playing the beta game two weeks before its actual release as a product.

What do I get from you when I pre-order?
Your code will be sent to you electronically via e mail.

How will I know when I can access it?
We expect the early access to be available 2 weeks prior to the actual release date of the game. Keep checking our news homepage to keep up to date with both release date information, and information about the live date for early access.

How long does the beta code take to install?
This will very much depend on your internet connection speed. For example with an average speed of 2mb/s it should take 20 minutes. Please note however this is only a guide and it will vary.

Can I play all game modes in the beta?
The career mode, and new Classic mode including Challenge mode will all be playable in the beta. However it is not the full and final version, so some elements will not be activated until the final version.

The price is set to £34.95 for Europe. If you live outside Europe, you will get a new price of just £30.39 due to the tax-free policy of our digital distributor for non-EU countries.

The screenshots below showcase how the price changes from £34.95 to £30.39 for non-EU residents.

Step 1: Click the "Pre-Order Now" button on our FM14 product page to be taken to the shopping cart. Then hit the "Start Secure Checkout" button.

Step 3: Before choosing your payment method, you will get the updated price.

Cheaper than the official Steam store
No matter what your local currency is, the price will remain the same and your currency will be automatically converted to English pounds at the time of payment.
For example if you live in a country where EUR is the local currency, you'll be charged the equivalent of £34.95 in EUR (should be €40.75) and so on.
At any case, the price you get on our store is actually cheaper compared to the official Steam store which has different prices for UK, Europe and rest of the world.
UK: Our price £34.95 - Steam store £34.99
Europe: Our price £34.95 (or €40.75) - Steam store €49.99
Rest of the world: Our price £30.39 ($47.35) - Steam store $49.99