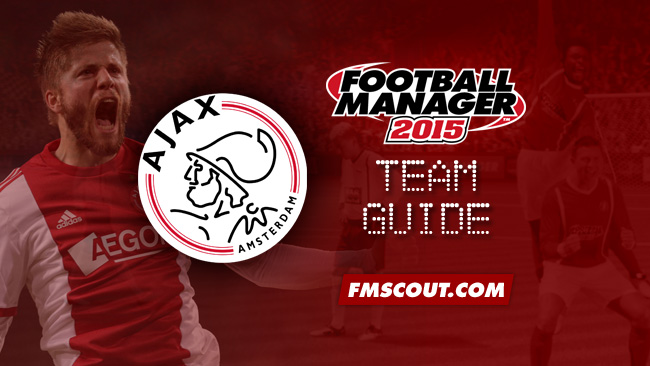 The board expects you to Win Eredivisie and reach the group stage of the Champions League. Johan Cruijff Schaal isn't high on their list of priorities. With these expectations you've been given a £12m transfer budget, and £279k per week payroll budget.

My personal favorite. Gives you allot of room when attacking and a solid defense as well. In my experience, not a very ball possession tactic, but a very fast and attacking tactic. Your squad will fit well with this tactic as you have many players who can play well in more then one position.

Possession tactic in my opinion. 3 central defenders, 2 wing-backs, 2 central midfielders, 1 attacking midfielder and two strikers. The team will play narrower and try to keep the ball just over the midfield. The wing-backs will run up and down the pitch making crosses into the box where 3 attacking players wait.

Counter attacking tactic used when playing the bigger teams in Champions League. It gives you a solid defense with the opportunity to get the ball up the pitch fast and efficient. Your DM will have a key role when using this tactic. He will work between the 2 midfielders and the defense, making interceptions and winning the ball.

Goalkeeper:
Your first choice should be Jasper Cillessen. He's a very good goalkeeper and he kept a clean sheet in 17 matches in my first season (Won Dutch Goalkeeper of the Year, first season). He's also in a good age, and will probably get even better with the years. The distance he can get from goal kicks is his weakness, and he will tend to walk out from the box with the ball. You have 33 year old Diederik Boer as backup, but it's also worth keeping an eye to youngsters Peter Leeuwenburgh and Xavier Mous.

Right Back:
Ricardo van Rhijn is your best option as a right back. He will perform evenly and keep a good form throughout the season. He only 23 years old and has allot of potential. His weaknesses is aerial abilities and he doesn't like big games. As backup you have Ruben Ligeon. Kenny Tete, Leeroy Owusu and Terry Lartey Sanniez are three youngsters also worth mentioning.

Central Defenders:
Niklas Moisander (c) and Nick Viergever. Niklas Moisander is a experienced CD and will keep a great form the whole season. He is also a good header and can score from set pieces. His weakness is his pace. Nick Viergever is 24 years old and plays very well as CD and LB. His weaknesses is also his pace and aerial play. As backup you have 22 year old Joël Veltman and Stefano Denswil. Mike van der Hoorn, Nathan Leyder and Jairo Riedewald are also talents worth mentioning.

Left Back:
22 year old danish Nicolai Boilesen. He enjoy big matches and has allot of potential. He's fast and performs evenly. His ability to position himself correct can be a problem, his marking skills are not great either. As backup you have Nick Viergever. If you choose to use Nick Viergever as LB Joël Vetlman is up for the task as CD.

Right Midfielder:
As right midfield I've chosen Lasse Schöne (Runner up Eredivisie Top Goalscorer (25)). I use him as OMR and player role raumdeuter. His best position is OMS, but I wanted to play Lucas Anderson in that position. Lasse Schöne have been my best player, scoring 25 goals in 32 matches. He can also assist (19). He's a bit selfish player, but he will deliver. You have youngsters Anwar El Ghazi and Sheraldo Becker as backup. They both have allot of potential and will become star players. It is also worth mentioning Robert Muric.

Central Midfielders:
Thulani Serero and Lerin Duarte. Serero is a hard working team player. He plays best as a roaming playmaker, but can also be used as a deep-lying playmaker. His weakness is his ability to position himself. 23 year old Lerin Duarte is a very good technical player, he's professional and plays well in a couple of positions. He's bad at marking and can have problems with his concentration. Niki Zimling is on loan from Mainz 05. He's a hard working player, but his intelligence made him my backup. Lucas Anderson, Lasse Schöne and Davy Klaassen can also play in midfield, but all of them are very attacking. 19 year old Sinan Keskin is also worth mentioning.

Left Midfielder:
Ricardo Kishna (Won Dutch Young Player of the Year, first season). Young and fast winger. Has the potential to become one of the best in the club. He will probably struggle with playing evenly due to his age, I found this to be a problem, but with Viktor Fischer injured I had to use Ricardo Kishna almost every game. Tobias Sana can also play left midfield, but I sold him due to his age and attributes ratio. Vaclav Cerny is 16 years old and will be to young to use regularly. Viktor Fischer would be my first choice, but he's injured 6-7 months.

Attacking Midfielder:
As OMS I've chosen danish talent Lucas Andersen (Runner up in Eredivisie Golden Boot, first season). Has allot of potential and enjoys big matches. He's also fast and can play in a couple of positions. This makes him my first choise. He can be a bit selfish, and sometimes this can be a bit frustrating. Davy Klaassen is also a good choice. He is not as technical as Andersen, but will still be a good pick if you choose to use Andersen as CMD. Lasse Schöne can also play in this position. Abdelhak Nouri will also become a star player in this position.

Striker:
You have three strikers, 17 year old Richairo Zivkovic, 24 year old Kolbeinn Sigþórsson, and 20 year old on loan Arkadiusz Milik. At the start of the season I didn't know who to play. I love playing young talents so after playing them all in a couple of matches I chose Zivkovic and sold Sigþórsson. He played a very good season, scoring 19 goals in 34 matches, but due to his age he had a problem keeping his form (9 consecutive matches without scoring when Milik was injured). 18 year old Queensy Menig is also worth mentioning.

The biggest weakness is all the young players who can't keep form and doesn't play evenly. At times this was very frustrating, but I did not deal with it. I kept on playing players like Zivkovic, Andersen, and Kishna, hoping they would find they're best game and develop into world class players.

The strikers. I did not feel that Kolbeinn Sigþórsson performed at my standards and I chose to sell him. If you choose to do so yourself it may become a problem if Zivkovic or Milik doesn't perform. If so, I would recommend getting a more experienced striker (Marnix Kolder from Go Ahead Eagles. Topscorer in Eredivisie in my first season).

Another weakness that I found was the midfield. Serero and Duarte are attacking players and will have a problem defending. I bought Lucas Romero, who will become a world class box-to-box player, to get some balance in the midfield.

To summarize, AFC Ajax is a great team to play in FM15. With a very good squad and exceptional youth academy, the club has potential to become one of the best in the world. I played a very good season (24W 10D 0L) and I will keep on playing with Ajax, hoping to someday win Champions League.

If you choose to play Ajax you will have to defend the 4 year on the row Eredivisie title, and at the same time compete against the very best in Champions League.
I won Eredivisie in my first season, and reached the quarter finals of Champions Leage.

Please comment this guide if you found it useful or if you had other experiences with this team. All feedback will be appreciated.