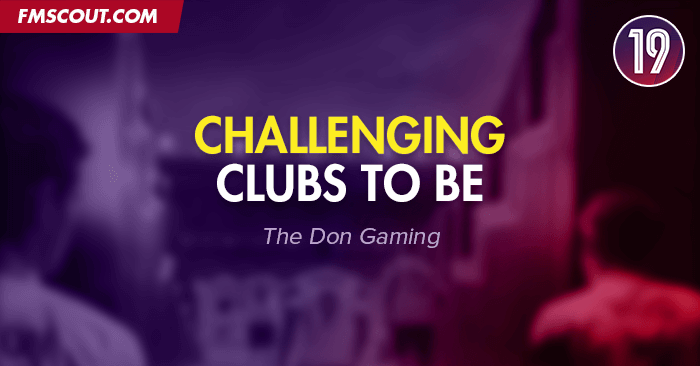 Welcome to a list I am putting together with clubs I think will offer great saves on FM19. Picking a team can always be hard so I’ve tried to balance having a good short term save with some good longer term saves.

From a Youth Development project to a side that needs an overhaul or even just a team that’s fallen on hard times, football can offer everything and in Football Manager 2019 we’ll see teams that offer all these different kind of saves and so much more.

I’ll update this article regularly as well as the playlist where I go into each team in detail over on YouTube.

Disclaimer: I'm planning to add more clubs outside the UK. Just started with UK as I was feeling most comfortable with.

Ajax are a club that’s pretty commonly played every year on Football Manager. And 19 should be no different. They suit just about every play style you can think of. They have one of the strong youth academies in world football and really do pursue developing their own talent, while also having the appeal to attract players from abroad.

Ajax like many other big fish in small ponds have suffered with not playing in one of the top 5 leagues over the last couple of decades. However with the right management in charge and a little bit of luck rebuilding them into a European Powerhouse really could be a fun and rewarding medium term challenge.

The former Premier League winners made history last year by being the first winner of the English top flight in the Premier League era to find itself in League One. Mismanaged Blackburn Rovers have found the last decade extremely hard. Fans being unhappy at how the club is being run is almost the smallest of the problems.

There is light at the end of the tunnel though, they’ve made some good signings since that relegation and bounced back on the first attempt. They now come back into the Championship with a strong spine and foundation, as well as several good youth prospects. You could play Blackburn in different ways but I think a good challenge would be to get out of the Championship within 2-3 seasons and start to push them back to title challengers.

The side finished mid table last season in the Championship and with the form of signings Martyn Waghorn and Joe Garner looked like they could push on and challenge for the playoffs this time around. However they lost both players during the summer and are now second favourites to get relegated.

With a decent side around them and a couple of good additions Ipswich could push on and still achieve that but they look like a very hard first season within the championship this year, getting them into the premiership and building them on could be a great save on this years game.

The sleeping giant of English football has struggled since their relegation and financial issues at the start of the century. They have an extremely high turnover of managers and a good appointment and some stability could be massive for Leeds.

As a challenge they have a very strong squad for the championship this year, one or two good signings could easily get them promoted first or second season, after that returning Leeds to their glory days will be the real challenge. This would be a good medium to long term save.

Since the clubs relocation to Livingston in 1995 its been an interesting couple of decades. With several promotions a couple of relegations, a few administrations and a liquidation it’s been very much a rollercoaster ride. This season after 2 back to back promotions the club once again has achieved top flight status.

In a much fitter and self sustaining state now Livingston offer an extremely difficult first season on FM19. Despite having some good prospects including Matthew Knox the squad is very much a championship squad. Staying in the top tier will be a big task and will need careful management from the Toni Macaroni Arena. Longer term challenging the old firm is possible but breaking them on a shoestring is always hard.

As a club Malaga had ambitions, after taking huge investment in 2010 they set their sights on becoming a dominant force in Spanish football, and for a while it looked possible. Under Pellegrini the club qualified for the champions league and even got as far as the quarter finals only knocked out in controversial fashion. After that however the club was banned from European competition for financial mismanagement, and a couple of years later starting a steady decline.

That decline peaked last season where they finished rock bottom of the top flight. Relegated to the second tier is where you’ll start your journey with Malaga and bouncing back on the first attempt will be a must. Once their a steady improvement can see them once again challenge for European football, although knocking the big two off their perch won’t be an easy challenge.

One of the oldest and most prestigious clubs and in many ways are respected for sticking to their principles of not playing players wanting to keep football at its roots as a play for fun sport. It’s that however that makes them a hard challenge.

One of the handful of clubs hard coded as Amateur status with no way to change it makes Queens Park an impossible task. Finding a gem getting him in and losing him on a free hurts the first time. Never mind when it will happen with every signing you make. This isn’t a challenge for the faint hearted but restoring Queens Park as one of the countries premier clubs would be one of the most rewarding achievements.

I’m not sure if Rangers still qualify for the sleeping giant category after consecutive third place SPFL Premiership finishes. On FM19 however, they look a much better save in terms of starting squad compared to 18. With a much improved squad and keeping a hold of star talents the initial challenge should be much easier.

The financial issues were brought about by the dream of winning the champions league, this is the challenge I’d take longer term with Rangers. Domestically they’re the most successful club there is, taking that to the world stage is the real challenge.

Owned by the class on 92’ makes Salford a attractive save on it’s own. However the real reason I picked Salford City for this list is due to this summers transfer business. Since 2014 the side has had 3 successful promotions to reach the National League. And their transfer business has sent a statement that’s the goal once again.

The club have raided higher leagues, embarrassing the Scottish Premiership signing Adam Rooney, and grabbing senior players from league one and two. You’ll inherit a squad with a spine ready for higher challenges and getting promotion should be you’re only target in the first season. Longer term getting to the Premier League will be the goal. Salford will be easy in the initial challenge, but testing later on.

The Premier League relegation battlers with a turnover of managers that could rival any side, at least that was the case 2 years ago. Back to back relegations and a wage budget that spiralled out of control have left Sunderland finding themselves in league one.

The Black Cats will want to bounce back at the first possible opportunity and will want as little time as possible in the championship. Building quick and fast and restoring Premier League status is a must. Even then the fan base won’t be happy and if you can moving them up the table would be the aim with Sunderland.

Eredivise winners as recently as 2010, winning the national trophy back to back in 2010 and 2011. The club have found themselves in a slump since and last season finished bottom of the top tier of Dutch football.

Getting promotion back to the top flight is the instant target and one looking at the squad should be capable of. Investing properly could see you propel them up back into European contention. Topping the Dutch big 3 being the longer term aim.

2 quick fire promotions and a hungry owner who’s willing to invest have made Wolves a very nice looking prospect as a Premier League save this year. Having made big signings relative to their current playing level in the championship they continued that after getting promoted.

With a strong spine and a good balance of experienced and young players Wolves offer a strong starting point. The owner has shown willingness to invest especially in the Portuguese market and with ambitions of adding Wolves into the top 6, it looks possible in a short to medium term save.

Discussion: Challenging Clubs to be on FM19