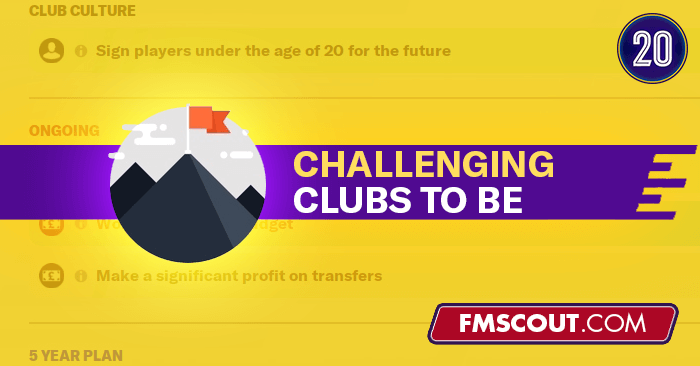 As another year of Football Manager is just around the corner, this article offers some different challenges to take on throughout the year for those who are looking for something other than the absolute giants of world football but also not wanting to venture all too far down the leagues.

Focused in Europe, this list will offer both long and short term challenges and gives you a large range of ideas of who to take on in your Football Manager 2020 save.

Bolton a team who over the past couple of seasons have had a dramatic fall from grace having endured financial difficulties. Once a side who’d regularly feature in the top half of the premier league, finishing at a high of 6th in 2004-05 season thus seeing them qualify for the now named UEFA Europa League they now languish in the third tier of English football. Due to their financial difficulties, Bolton were issued a points deduction of -12 and will start life in League One already at a major disadvantage. It will be up to you to overturn the initial points deduction and aim for survival in year one, before making your way through the league pyramid, with the ultimate aim of winning the converted Premier League and becoming the first Bolton manager to lift the top tier title.

The most successful team in Belgian history, Anderlecht are a side who have struggled of late, not winning the league title in two seasons and currently sit with two wins from ten games in the league this season. The first aim with the former UEFA Europa League winners, would certainly to ensure domestic dominance once again, before taking on Europe. With Vincent Kompany returning to the club as player/manager at the start of the season, he quickly stepped away from the job following a poor start. Question is, can you do any better than the legendary center back?

Again another giant of their domestic league, the club that developed Cristiano Ronaldo, have fallen into massive difficulties over recent years. With fans protesting at their training ground leading to stars such as former captain Rui Patricio attempting to terminate their contracts, the club has been in turmoil as of late. The 18 time Primeira Liga champions currently sit in 5th in the league and aren’t looking likely to be challenging Benfica and Porto for the title. But with a side mixed with experience and youth and led by the incredibly talented Bruno Fernandes, can you lead them back to former glories?

Chelsea are a save many an FM fan would of been considering as a potential save this year especially for the beta. Following a breach in registration rules, Chelsea will be unable to buy any players in the first two windows. This will give you a big challenge to ensure the expectations Roman Abramovich will set are met. With a young squad with talented English players in Tammy Abraham,Callum Hudson-Odoi and Mason Mount, you have a squad set to be developed and turned into world beaters. Once the transfer ban is over you will have a big decision on whether to go out and sign a whole new 11 with Chelsea’s inflated finances or to stick to the youth core you have been developing. Either way the expectations of adding to Chelsea’s single UEFA Champions League will need to be met to the Russian owner happy.

A team who once challenged Spain's elite, Deportivo La Coruña last won LaLiga in 1999/00 season and haven’t featured in the top three since 2003/04. Since then they have had a steady decline falling to their initial relegation in 2010/11, suffering another two relegation's since. Their final relegation came in 2017/18 and for the first time this century failed to get promoted back into LaLiga at the first time of trying. Finishing 6th last season, it will be a massive challenge in firstly getting promoted back into LaLiga before making your way up the league table. The biggest challenge will be breaking the three big teams, Barcelona, Real Madrid and Atlético Madrid, monopoly on the league and winning the clubs first title since the turn of the century.

A classic for FM players for many years with the Spanish side having a unique transfer rule in place. The team are only able to sign players produced in the Basque region and therefore that limits the level and quality of talent available. In competing with Real and Atletico Madrid as well as Barcelona, it will take years to build up a strong enough academy to begin challenging for Spanish titles, let alone European glory. Will you be able to complete this FM classic?

Following on our theme of FM classics, Paris FC is another challenge that has done the rounds over recent years. With oil rich Paris Saint-Germain the dominant force in French football with the likes of Neymar and Mbappe, Paris FC are stuck in the second division. Challenge one would be to seal promotion to the top tier before challenging one of the richest sides in the game and making the Paris derby the biggest in the country before eventually surpassing your rival.

With one of the most unwanted records in German football having suffered relegation nine times from the Bundesliga, Nürnberg are a team with very little positive history. Currently playing their trade in 2. Bundesliga the Germans would need a lot of work to turn them into potential top tier challengers. With Bayern and Dortmund holding a vice like grip over the league for a number of years and the rise of RB Leipzig, could you turn 1. FC Nürnberg history around and have them challenging for domestic titles every year?


With my list complete, have I missed any out?
Leave a comment if you have any other challenges to suggest and let us know if you will be taking on any of the teams listed above.

Discussion: FM20 - Challenging Teams To Be on Football Manager 2020