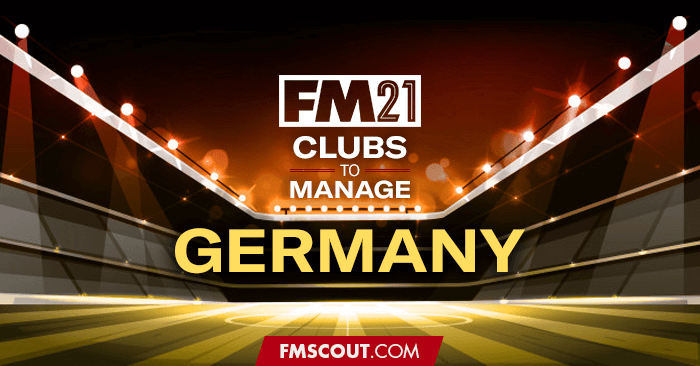 Looking into a potential destination within Germany for a FM21 save? This article can help guide you to select a club - with some reason - to manage and enjoy. This is the Germany edition of a series of articles posted here on FMSCOUT all of which can help guide yourselves to selecting a club for FM21.

The article is divided by league's; Bundesliga, 2. Bundesliga, 3. Liga - all three of which are playable in FM21.

The 1970’s was by far and away the most successful for the club. Winning five titles in nine seasons including a Champions League final appearance where they lost to Liverpool, two Europa League cups and a DFB-Pokal cup in that time frame. Ever since then… one DFB-Pokal title in 1994/1995. Most recently they just pipped Bayer Leverkusen to the final Champions League spot and will hope to capitalize on it by building to compete further in the future, especially after a poor Europa League campaign the previous season. Success of the 70’s seems a far-cry now, but a goal which may be met in the long term by you as manager.

It’s sad to say but Bayer Leverkusen are known as the “nearly-men”. Synonymous with Michael Ballack whom whilst playing for Bayer Leverkusen lost the league on the final day, the champions league final to Real Madrid and the DFB-Pokal final to Schalke. Ballack also lost the World Cup Final with Germany to Brazil that same season. All Bayer Leverkusen have to their name is a DFB-Pokal win in 1992/1993 and a Europa League from the 1987/1988 season. Just recently they missed out on what seemed like a good shot for a Champions League spot to Borussia Monchengladbach. Can someone change their fortunes and no longer deem them “Neverkusen”?

It doesn’t seem like that long ago where Werder Bremen were winning trophies and competing with the best for them and having names such as Deigo, Torsten Frings, Miroslav Klose, Mesut Ozil and Claudio Pizarro. However, now they just finished this past season by barely staying in the Bundesliga by beating Heidenheim in the Relegation Playoff. It seems a long ways-away to get them back to where they once were not that long ago.

What the hell is going on at Schalke? The instability of the club is extraordinary with a high level of debt and recent poor finishes taking place. Insane how just a few years ago they were regulars to compete for the title and regulars in the Champions League. Recently they finished 12th in the Bundesliga and went on a 16 game run without a win in the league, plus with Coronavirus it looked like the financial troubles would pit them into the second tier – but they remain in the Bundesliga. They have 5 DFB-Pokal’s with the last one in 2010/2011 and 5 German Championships (before the Bundesliga formation). Schalke at one point looked like they would be direct competitors with Bayern Munich for years to come, but that fell to Borussia Dortmund their archrivals instead under Jurgen Klopp.

Another club which has fallen heavily from grace but now back into the Bundesliga after being in the second tier. Bundesliga champions in the middle 2000’s and regular European competitors after the turn of the decade, Stuttgart were on a steady decline which resulted with them being in the 2. Bundesliga for the first time since the 1970’s. For being one of the largest clubs in Germany, this form despite promotion is unacceptable, and being back in Europe is an eventual must for the club.

For the first time in their history, Heidenheim were so close to being promoted to the Bundesliga, losing out in the playoffs to Werder Bremen. What makes this more miraculous is that Heidenheim were promoted to the third tier for the first time at the turn of the 2010’s, and even though they were there in the 60’s and 70’s – the third tier then was a full amateur league. They’ve done brilliantly last season and hopefully this coming up season, they can get an automatic promotion spot, bringing them to the Bundesliga for the first time in their history.

Hamburg are what people deem to be a “sleeping giant”. Champions League winners and 6 time German Champions, Hamburg are one of the most successful sides in Germany but they were relegated to second tier for the first time in their history after the 2017/2018 season. Bringing them back to the top and regularly competing in Europe is the challenge set on ones shoulders when taking this massive club back to “where it belongs”.

Similar to Heidenheim, SV Sandhausen have never been promoted to the Bundesliga – but rather than getting close, they have settled in recent years for mid-table finishes. No major honours to their name, SV Sandhausen are prime for taking over and bringing success to a side which has never tasted anything other than one 3. Liga championship which earned them promotion.

FCN have been relegated from the top tier the most times in Germany, nine to be specific setting the record and are the German definition of a yo-yo club. Alongside other yo-yo clubs VFL Bochum and Karlsruher SC in the second tier – Nurnberg have been struggling to stay in the second tier since they were relegated from the Bundesliga in the 2018/2019 season. They won their relegation playoff 3-3 against Ingolstadt to stay in 2. Bundesliga. Nurnburg look set to continue to struggle in the second tier and potentially drop down to the third tier which happened only once before in their history during the 1996/1997 season. Can you turn this traditional yo-yo club who have one Bundesliga title to their name into a more permanent main stay in the top flight?

Majority of their life, Kickers have been in amateur football, even reaching as low as the seventh tier of German football. At this point however, they began a recovery and a mission to get back to reach professional football status. In 2014-2015 they did so by reaching the 3. Liga and the following season were promoted to the 2. Bundesliga. Now they seem to be yo-yoing between the two divisions, just recently being promoted to the 2. Bundesliga. Establishing this club in the second tier and kicking on to the Bundesliga is a dream… plus who wouldn’t want to do so with a club named Wurzburger Kickers… like seriously best name ever.

One of the more infamous sides from East German football, Dresden was the most popular and successful side before the reunification of Germany from behind the Eastern side of the wall. Regular appearances in Europe with respectable campaigns made them well known throughout Europe, despite the heavy corruption in the league from other clubs back in East Germany. After reunification, Dynamo struggled in the Bundesliga and were relegated in the 1994/1995 season dropping between the second and fourth tiers since then and now recently being relegated to the 3. Liga.

It’s quite sad to see the state that Kaiserslautern are in. One of the founding members of the Bundesliga, they stayed in the top division for 33 years. They have the unique award of winning the Bundesliga as a newly promoted team – the only ones to do so – for the 1997/1998 season. It looked like the relegation was a meagre blip which ended up to not be the case. Despite impressive Champions League and Europa League performances following their last title win, Kaiserlsuatern were on the slide and now find themselves in the third tier of German football.

1860 Munchen have a weird sort of cult status amongst the football community. They were one of the founding members of the Bundesliga and won it during the 1965/1966 season. However, what they seem to be most known for is their once shared use of the Allianz Arena with hated rivals Bayern Munich. Financial mismanagement for years after their relegation from the 2003/2004 season and several near insolvencies leave them languishing in the third tier after being in the fourth tier not too long ago. A lack of willingness from the upper management leaves this club in severe disrepair.

Magdeburg were the main direct competitors with Dynamo Dresden during East Germany’s existence. However, unlike Dynamo Dresden who were more successful and arguably the bigger club, Magdeburg have the now unchangeable honor of being the only East German club to have won a European title where they won the Cup Winners’ Cup in 1974. During German reunification, the club fell into very difficult times thanks to massive mistakes by club’s management. They only recently entered back into professional football in 2015 where they were promoted to the 3. Liga.

Saarbrucken are a rather unique club where they were the Saarland’s representatives for the first edition of the Champions League back in 1955/1956. Also majority of their team represented the Saarland which was a German state occupied by the French after the war where they competed in the 1952 Summer Olympics and were in qualifications for the 1954 World Cup where they came second in a group of three with West Germany and Norway. Most recently during the 2019/2020 season they reached the semi-finals of the DFB-Pokal being the first club from the fourth tier to do so and are now in the 3. Liga.

For the first 50 years, Verl with nothing but completely insignificant before 1970 where they reached the fourth tier. Since then, Verl have been relegated only once and played promotion for the second tier and if they had won that – SC Verl would have been the smallest town ever to field a German pro football team. They are one of the most consistent top teams of Germany’s amateur football by playing in the Regionalliga West and consistently getting midtable finishes until recently being promoted to the 3. Liga. Uniquely them and SC Wiedenbruck operate completely under amateur conditions without any liabilities – making them financially stable compared to other teams in the third and fourth tier.


Best of luck in your FM21 saves. Stay safe and stay healthy.