Search
FM Scout is the only community you can talk Football Manager in real time. Here are 10 reasons to join!
Home › Articles › Opinion › Editorial ↓ 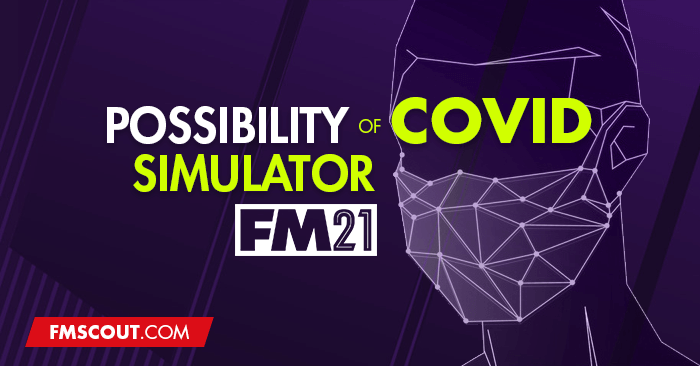 Football Manager is well known for making it’s simulations as realistic as possible. In recent years we have seen the introduction of the Brexit simulation – which depending on the outcome can severely impact your saves.

There is some possibility then that FM will have inputted a COVID simulation to display the impact it has had on the economy and world football within simulation. This was denied by Miles himself for FM20, stating; “Just to let everyone know that we will not be doing an update to #FM20 to reflect this or postponed leagues as we want it to be an escape from Covid-19, not a reminder of it.”

This is understandable of course as the timeline for FM20 did not occur during the pandemic – but the possibility is still there for FM21. We at FMScout take a look at the potential of FM21 having a COVID simulator and the impact it may have within the game and your saves.

Similar to the Brexit simulation in recent editions – COVID will most likely be unavoidable, unable to be disabled at the start up of a save. The only way for it to be removed would be using the Database Editor. In time most likely there will be downloads on the Steam Workshop and/or FMScout allowing people to completely remove COVID sometime after FM21’s release.

While many may be upset about COVID most likely being unchangeable within FM21, keep in mind that FM is built to be as realistic as possible. In fact, the Brexit simulations done by Sports Interactive were used as data and presented to the British government to present the possibilities of the impact it would have on football and the economy as such. COVID simulations would be built within the same light.

Another thing to remember is that you do not have full control over the world as you would in FIFA or PES, you are dumped into a simulation where it can be ruthless. If this is not to your liking, then fiddling with the database editor is your best solution.

Like Brexit simulations, there is the possibility that different outcomes per save would be possible for COVID simulation. The different outcomes would rank from COVID lasting for several seasons and impacting football accordingly – or COVID being simulated as not having such a lasting impact and finished within a season.

Realistically, nobody knows how long the pandemic will last nor the outcomes and dates of its impact on football such as having fans back in stadiums. The other possibility is that COVID may impact some countries more than others within the simulation. As we know in real life COVID has impacted certain countries harder than others and therefore impacts the sporting environment differently then a country which is ahead in the pandemic.
As we know that this is all speculation, but similar to Brexit – there most likely will be different severities of COVID per save and the according impacts would happen as you continue on with your save. The percentages of getting a specific scenario compared to another would be calculated by Sports Interactive as they discuss and study from professionals all real life scenarios.


What Exactly Would COVID Impact?

We’ve already seen several ways COVID has impacted football and all that encompasses it. But there is more than meets the eye during this pandemic in ways that COVID can impact your save – let’s outline several possibilities.

The financial impact is the obvious part of football which has been most hit by the pandemic. From transfer fees being impacted to lack of income from match-day revenue and player wages dropping across the board or being differed – all of these issues would be simulated within the game.
Other potential financial impacts could be less merchandise sales due to majority of the population having an impact on their income, ticket prices dropping, tax rebates or rebuttals, less sponsorship income and clubs repaying TV income over several seasons or in chunks.
Club and domestic competition money would also be impacted as already majority of competitions have reduced their prize money for reaching certain places in a league or rounds in a competition.
Depending on the severity of the simulation – the financial impact would very from save to save but no matter the simulation there would be an impact on finances.

COVID is infectious; clubs, players and leagues have taken multiple steps to ensure the safety of all involved to limit the spread of the virus. However, people still get sick and make stupid decisions which has been well documented on the internet, social media and news media. The COVID simulations can impact your players specifically – having to quarantine if showing signs of the illness and slowing down your club and keeping out players to prevent spread within the club.

It could also affect coaching staff and an outside shout of affecting yourself, meaning that you can not attend training sessions (be in charge of them) or attend matches. Deaths within the game would be highly unlikely – as legal action would take place. There is the possibility though that longevity of obtaining the illness could affect a player for longer periods of time. Not just quarantine but possibility of the player being out a week or two compared to maybe a month could be apart of the simulation as they cope to get over COVID.

COVID could have an impact on your training schedules. Players in quarantine after being suspect in potential contact with others who obtain the virus. Also players who do stupid things such as party for example not only miss training but could be sent to quarantine.

On a day-to-day basis, less training would take place and be more difficult as social distancing guidelines and rules still need to take place. Also regular testing would be required of players and staff – taking away time and potentially a day away from a normal training regime.

The big note COVID has had is messing up the football calendar. A condensed schedule is now being witnessed with almost now pre-season available for most clubs and players. On top of that – many tournaments have been adjusted, qualifying rounds for competitions have been reduced to one leg rather than two such as the Champions and Europa League.

Other competitions have been delayed and have as yet been able to be properly rescheduled. If by the time of FM21’s release tournaments have not been rescheduled – FM will reschedule the tournaments in the simulation.

There is the possibility of matches being postponed due to the impact COVID may have on a club or squad. This may seem unlikely as it may force individual players out but it could impact enough that some matches may be delayed.

Within FM are “political” simulations. Brexit was the biggest and most recent one but there are simulations which involve countries leaving or joining Unions such as the EU or other alliances. This has an impact on player transfers and impacts squad registration rules and regulations.

When in the EU it is easier to sign players than outside it for example. However, COVID can now have an impact on player transfers. First off there are quarantine regulations for players transferring between countries. This means that last minute deals or signing players in the middle of the transfer window – which will be during the season may not be available for another week or two until after they have been signed. This of course varies between countries’ regulations on quarantining.

Countries have “no travel” countries and other nations on lists with specific rules to those visiting or coming home to quarantine and do specific medical tasks for a set amount of time. Over the COVID simulation within FM, this will impact incoming players and will need to be noted by you.

The one that as individuals we all relate too – we want to go back to watching football in stadiums. It was discussed earlier the financial impact this will have in your FM saves and its just an extra note that over time fans will slowly come back into stadiums. The exact impact and amount varies on the COVID simulation and is even dependent on stadium sizes. This is something to keep in mind if you want to expand your stadium or build a new one.
First off there is the financial impact of COVID in potentially building or expanding a stadium and secondly the ability to house fans in your stadium. This is an issue which could delay your plans and the board’s plans for several seasons if potentially following with their plans at all.

This as of written is still just a hypothetical scenario that there even would be a COVID simulator within the next rendition of the game. However, it is important to consider that there very may well be one or at least some impact such as finances and scheduling within the game and how that impacts your game.

As we sit here and watch the world go on, the impact of COVID is long lasting and the exact impact of it will not be seen till decades from now. True we may not see a simulation for FM21 but there is a very real possibility of their being one in FM22 or beyond.


For now, please stay safe and healthy – and enjoy your FM saves.