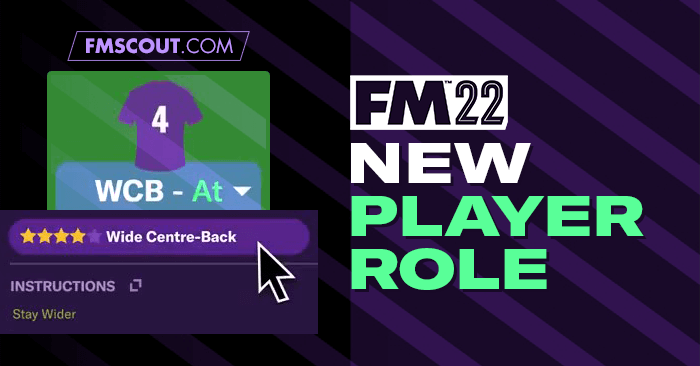 Sports Interactive unveiled one new player role which is being introduced in Football Manager 2022 on their feature reveals videos showcasing some highlights behind the whole tactical revamp they've worked on.

The new role is situated in the defensive area. It's the Wide Centre-Back.

The Wide Centre-Back role can only be assigned on the DCR or the DCL spot, not the middle DC spot. It can have Defend, Support or Attack Duty.

Here's the official description of the role: 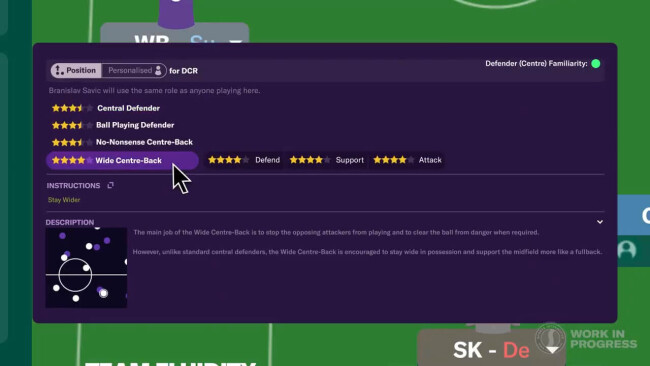 With Defend duty, WCB is more like a traditional centre-back in a back five. They provide support in wide areas at times, but from deep. Less likely to overlap and more likely to provide a diagonal backwards passing option.
Instructions for this duty: Cross From Deep, Hold Position, Stay Wider

With Support duty, a WCB is willing to make overlapping and underlapping runs to create 2 vs 1 situations.
Instructions for this duty: Stay Wider

With an Attack duty, the WCB is willing to do the same, while also having a higher tendency to dribble with the ball.
Instructions for this duty: Cross More Often, Cross From Byline, Dribble More, Stay Wider

Players who would be a good match for this role:
Lucas Hernandez, David Alaba, Aaron Cresswell, Kyle Walker

In a nutshell, any technical wing back who can play as a central defender should be able to do a pretty good job in that position.

This gave the then, primarily defensive, full backs more support in defensive situations and the team as a whole more coverage against opposing attackers.

Fast-forward to the 21st century and in some formations the full-back and half-back have almost switched positions vertically on the football pitch, with some modern formations such as Sheffield United’s 3-5-2 from their successful 2019/20 campaign, employing wing-backs in the midfield and centre-backs centrally and, well, back.

In possession, the wide centre-back would have license to simply run past or overlap the wing-back creating overloads on that side of the pitch while the defensive midfielder would cover or makes himself available for a pass.

Crucially, these attacking movements must be timed correctly, triggered by a lack of opposing pressure on the ball or an used when an obvious opportunity to create a 2v1 arises.

Relentless pursuit of an overlap by both wide centre-backs would obviously be a hugely risky strategy and leave your remaining centre-back, or hastily vacated midfield, dangerously exposed to a counter attack.

How Can We Expect Football Manager to Change as a Result

Roles are actually a relatively new feature in Football Manager and as such are continually evolving and trying to keep up with the dynamism of modern football positions.

The false nine, defensive forward and complete wing-back have all been introduced fairly recently to the mix.

Some are used more than others and as with real life, an individuals strengths and weaknesses will determine what role or position you chose to play him in and ultimately what formation and tactics you choose to employ.

So will we see a mad rush to 3-5-2s, wing-backs and overlapping, attacking centre-backs when the game comes out in late October/early November? I’m not convinced.

The addition of the new role is, for me, a welcome one, the more FM can simulate and replicate the real life tool kit a football manager has at his disposal the better, but there's nothing sexy about a centre back is there?

And having three of them in my team ultimately means one less flair player, right?

"It's going to be a really, really enjoyable role for our fans.

They've been wanting this for a while and we could have rushed it in and just put in a role, but that is really never our intention.

We want to simulate the role accurately and so we wanted to see it and watch it in different systems and setups, and we've seen the evolution of the role.

Managers have been so creative with how they've used their Wide Centre-Backs, so we've added that realism with different duties as well to suit whatever tactical style you want to perform.

But it isn't just the role itself. That role, it performs a number of duties. It attacks, so it overlaps and it underlaps.

Previously, in other iterations of the game, we have had those instructions of underlap and overlap, but they're saved for your Full-Backs, your Wing-Backs, your Inverted Wingers, for your Wingers; they're not necessarily used for your Centre-Backs. 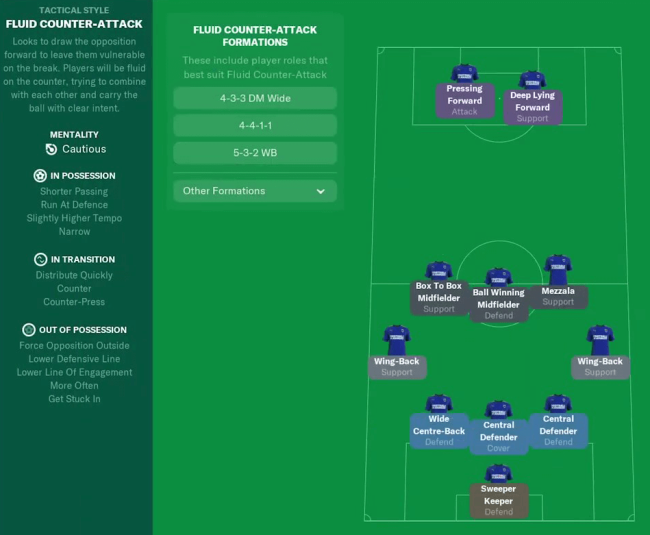 So for us it was about modifying those tactical instructions and making sure that we not only included the Centre-Back in there, but looked at how does your Full-Back or Wing-Back move off the basis of that Centre-Back?

So, it was about the movement of the player on the ball, what they do with it, and movement off the ball.

Where are they when you lose the ball? That's going to be fundamental for the whole system.

It's up to us to do a bit more education as well of how you can use that role in the system because there's going to be a lot of managers, as soon as the game goes out, who go "right, I want both my Wide Centre-Backs on Attack duty".

They're going to go forward but they don't have a DM in there!

Then there's going to be no cover and they're going to get hit on the counter so it's also about us doing it right, and this is one role that the whole system needs to be supported around it."