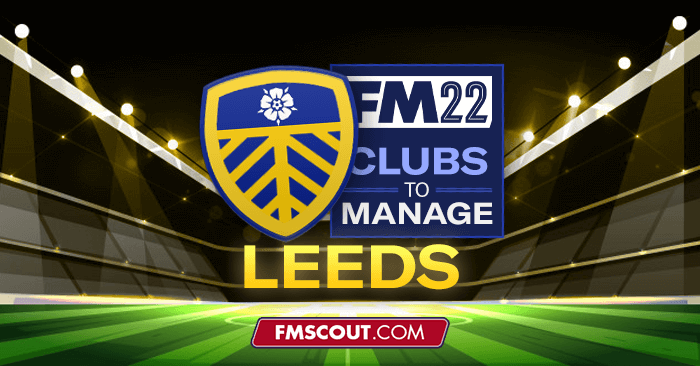 A bit about Leeds

Founded in 1919
Play at Elland Road (37,792 Capacity)
Club badge features the 'White Rose of York' a symbol of Yorkshire
Have their own original anthem called 'Leeds, Leeds, Leeds (Marching on together)'
A book and film have been produced about Brian Clough's stint as manager called 'The Damned Utd/United'

A successful club in their own right with 3 top division titles to their name, including the last top flight title before the introduction of the Premier League which we now all know and love.

There are several other trophies in the cabinet and Leeds could well be considered one of the most storied teams in England.

Their best spell of success came between 1961 and 1974 under Don Revie, a former Leeds United player whom transformed the club from being a yo-yo side to challenging and winning multiple honours during his reign.

In fact whilst he was in charge Leeds won 8 of the 13 trophies they have showing just how impressive that era was for the club.

They could have had even more as they reach numerous other finals; 3 other FA Cup finals, 2 further European and they came runners-up in the league on 5 other occasions and could consider themselves unlucky not to have added more silverware to the cabinet.

Onto more modern times, the initial start to the Premier League did not go well for Leeds following the previous season's league win they crashed out of the Champion's League early on and barely survived relegation finishing 17th.

Tides changed under George Graham and then David O'Leary – Leeds returned back into the European places in and reached the semi finals of both UEFA Cup and Champion's League.

Unfortunately behind the scenes then chairman Peter Ridsdale had taken out large loans expecting Leeds to continue reaching the Champion's League and bring that vital revenue into the club – they did not and repayments escalated into severe debts crippling the club.

Mass sales of players followed as well as their eventual relegation in 2003/04. The financial ruin affected them further with the squad being decimated and eventually Leeds were relegated again in 2007.

Due to the financial mess Leeds have quite possibly had the highest turnover of players, managers and backroom staff of any other club in the last 20 years.

Squads have had to be rebuilt time and time again and at short notice in some seasons as per varying situations the club found themselves in – when issues like these occur providing stability is vital and this was not stable this played the most part in why they found themselves in League one.

Owners have changed and granted they probably did want Leeds back to where they felt they belonged – The Premier League but there has been 18 different managerial changes since initially being relegated in the early 2000's and their return to the top flight after winning promotion in the 19/20 season.

What was and still is considered a coup for the club, Leeds United managed to bring in experienced manager Marcelo Bielsa to the club in 2018, he currently is still their manager.

Bielsa or 'El Loco' as he is nicknamed is famed for his Bielsa/Murderball style of play which is extremely fast pace, short efficient passing but working extremely hard out of possession- a highly demanding way which requires enormous reserves of stamina.

It was a stark change but the players took to it quickly enough and in this time Bielsa has developed some 'lesser' named players into vital cogs of the Leeds machine – Kalvin Phillips and Patrick Bamford have been transformed into consistent performers and have earned call ups to the England squad, especially Kalvin who played a vital part in England's run during the past Summer's Euros.

It tooks 2 seasons, but finally Leeds United returned to the promised land of the Premier League – in their first season they won over plenty of admirers for the high octane style and finished 9th and recorded the most points won by a newly promoted side since 2001.

A key area of their attack last season and this is probably the main man Raphinha, big money spent on the Brazilian last season but he has an absolute wand of a left peg and will be high on the radar of many bigger clubs – keeping him has to be a priority at least until Premier League safety is once again secured.

So Why Manage Leeds?

Leeds already have a storied history and a fair amount of silverware in the bank on the back of their successful periods, they are a big club with unwavering support so could be considered a fallen giant?

Definitely there is work to do to get them competing regularly towards the top of the table once again but the fans will feel like this is where they should be – adding to their glory days is a must.

As they have started their second season back in the top flight in less convincing style perhaps it is a case in FM22 also to avoid the second season blues and stay in the division first - once you have it will be onwards and upwards.

Another clubs for a recreation style – getting the Bielsa style of play to translate into the game will not be easy however if you can achieve it the football would be incredible and so much fun to watch.

Like other teams there are players to improve to get the most out of, there are several players in the academy on loan whom are decent prospects and worth keeping an eye on. In the main squad for the time being you have Jamie Shackleton rising through the ranks he is getting more game time – getting his role sorted and giving him more game time you'll certainly have a good engine to work with.

Leeds finally managed to sign Daniel James this season after missing out on him previously. The goals/assists have not flowed so far but perhaps you can get the best out of him, he has pace to burn and should be a key asset in the side.

Joe Gelhardt has made a couple of appearances this season and played a vital role for Leeds getting a point in their recent game against Wolves – he is a decent prospect in the forward positions he could prove to be useful alternative to Bamford/Rodrigo. His development may make a big difference in tight games.

So a definitive style, a reputation which precedes them but foundations to rise from the ashes and create a bright young group of players to out run the opposition.

Transfer dealings will be key for this FM save – Bielsa favours a smaller squad in real life but in game this could prove problematic if injuries strike.

So far this season Leeds have been without their two expensive defensive signings Koch and Llorente and they are far more frail at the back when these two are not present and when Kalvin Phillips is missing also keeping them fit or adding backup could make or break your season.

Whomever you sign will need stamina to take the strain so why not pick Leeds, you'd be crazy not to.