Every year, the developers review tactical instructions to ensure they are evolving with the modern game, which involves speaking to people in football and leaning on their expertise to keep refining the game.

One of the main things that has been improved is the defensive side of the football. As much as everyone loves to go forward and press high and attack, you also need to be able to sit in a low block and soak pressure and counter attack as well, so you have the tools to be able to defend as well as attack.

There is an evolution of language when we talk about football and FM are a huge part of that in terms of understanding how things work.

For FM23, the biggest change surrounds the Out of Possession instructions, in terms of simplifying the terminology but also the actual instructions. There are a lot more instructions to the defensive side.


The Line of Engagement instruction has changed to better reflect the way that coaches relay information to their players.

Previously, the instruction had ‘Higher, Much Higher’ options, which in turn was impacted by your team’s mentality and defensive line, making it tough to know exactly where you were telling your team to engage the opposition. 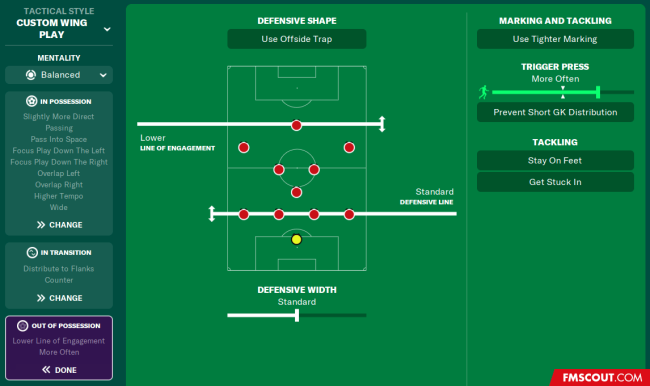 Out of Possession Team Instructions on FM 2022

Now, the instructions are more straightforward – Low Block, Mid Block and High Press. As a result, this gives you a greater understanding of your team’s shape, while reflecting real-life tactical selections.

As a result, the wording is more football specific and closer to the language you’re hearing on television by real life managers in interviews. 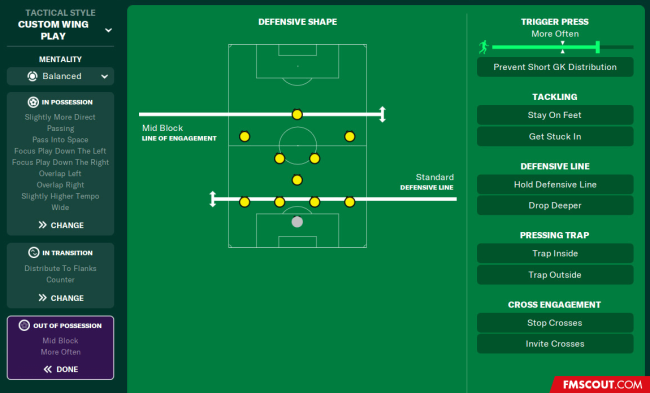 Out of Possession Team Instructions on FM 2023

Elsewhere, the Offside Trap option has been revamped based on research of current systems and how much the offside rule has evolved. Instead, there will be two new instructions at your disposal, giving you the option to tell your defenders to Drop Off or Hold the Line.

All defensive lines will drop off or step up at times, but this instruction will affect those close-call situations – do you want your team to aggressively hold their shape, or are you content for them to give up the space in front to defend the space in behind?

Defensive Width has been replaced, too, with four new Instructions, all of which will help you better set up your defensive shape in different zones of the pitch.

Outside of your own defensive third, you now have instructions to tell your team to set up a pressing trap out wide or in central areas, affecting the way your team positions and presses when defending – this can be used as an attempt to funnel the opposition into the area of your choice.

Previously, Defensive Width was based around stopping or inviting crosses, but now they are stripped back and presented as their own instructions; you can set your players to be narrow and defend the cross, or ask your full-backs to stop the cross at the source.


The new tactical instructions for FM23 will help empower defensive managers. By paying attention to the defensive mentalities and instructions in the game, the Match Engine now better reflects real-life football.