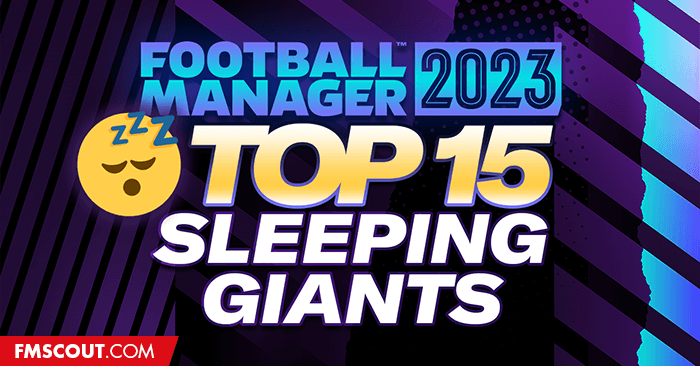 FM23 is on its way. All of us are excited to start our new saves - but sometimes choosing a club to manage is difficult.

One of the best stories in FM is bringing back a club from obscurity or mediocrity when there is so much potential available.

A ‘Sleeping/Fallen Giant’. Plenty of these clubs exist and I’ve put together 15 clubs in FM23 that could be brought back to their former selves.

The raposa are one of the biggest and most successful clubs in Brazil, also being one of only two Brazilian clubs to complete the Domestic Treble. The club also has produced many famous players - contributing to the successes of Brazil’s national team; Piazza, Ronaldo, Tosstao, Jairzinho and others just to name a few. They only just recently got promoted back to the top flight at the end of the 2022 Serie A season and being the biggest club in the nation again is a far off challenge.

The Toffee’s have a very respectable trophy cabinet, and are a massive club in the English game - at one point going toe-to-toe with eternal enemies Liverpool in the mid-80’s. Now though, Everton are just a main-stay in the Premier League with limited European football and a near threat of relegation in the 2021/22 season and no trophy since 1995. It’s difficult with the ‘Big 6’ but there is no reason why a club of Everton’s stature could force themselves into such a conversation and become a ‘Giant’ of the game.

Another massive club in the English game, The Black Cats were one of the biggest clubs in the early years of English football in the pre-world war years - in fact all but one of their major honours came before 1938. The stadium, support and historical successes should see Sunderland in the top flight rather than in the second tier. Problems are closer to home though as Newcastle and their new owners are set to see The Magpies become a real force in English and European football. The challenge with Sunderland is rising back to the top and dealing with Newcastle United.

One of the most successful clubs in France, but recently relegated after dealing with a financial crisis and placed into administration. This was a massive deal in France and even European football with the club regularly competing in Europe just a few seasons ago. Les Girondins are also renowned - especially in the 1990’s - for emerging prominent young talents. Challenging PSG seems impossible, but becoming one of the biggest in France again is something which should be achievable with this club.

Until PSG win one more league title (which should happen sooner rather than later), Saint-Étienne are joint-record holders with ten (10) Ligue 1 titles. Similar to PSG, they also have been runners up in the European Cup during their peak in the mid-1970’s. But this once-grand club was recently relegated to Ligue 2 after a dismal season which included 12 consecutive matches without a win in Ligue 1 and a penalty shootout loss to Auxerre in the relegation play-offs.

While not necessarily considered the biggest club in France, Reims are viewed still as a legendary and well respected club within the country. Their domestic accolades made them one of the leading clubs on the continent post-WW2 while also winning the Latin Cup (an international tournament pre-Champions League era and viewed as one of the forerunners to it), and being finalists to the said Champions League on two occasions within its first few seasons. They also contributed heavily to the first golden generation of France football as they provided the majority of the talent to the national squad who reached third place in the 1958 World cup with the likes of Kopa, Fontaine, Vincent and others just to name a few.

Despite not having the most grand of trophy cabinets, Kaiserslautern are historically one of the more successful clubs in Germany and rank a very respectable 11th on the All-Time Bundesliga table. The story of the club in more modern times is well known - one of the only clubs to gain promotion from the 2. Bundesliga and then defying all odds and winning the Bundesliga the following season. For reference they also won that 2. Bundesliga title too. However the wonderful story didn’t last and have spent the last four (4) seasons in the third tier before promotion last season.

Hamburg were known for being the only team who continuously played in the top tier since the formation of the Bundesliga - and even before its formation in the early regional years. They also have multiple European accolades with a Cup Winners’ Cup medal and a European Cup medal too. All this proud tradition and history collapsed though at the end of the 2017/18 season when they were relegated - and still remain in the 2. Bundesliga to this day.

One of the most popular football clubs in Germany, Schalke has over 160,000 members which makes it the second-largest in Germany and fourth-largest club in the world in terms of membership. Despite this, the majority of the club’s success has come in years past and most recently were just promoted back to the Bundesliga after a stint in the second tier. In recent years the club have fallen well short of their competitive level and have been overtaken by other German clubs.

I wouldn’t consider Ferencvaros to be a fallen or sleeping giant from a domestic perspective - however from a European perspective that is definitely the case and you could consider that case for the whole of Hungary. The Hungarian football machine is well documented including all their clubs with many of them being some of the best in the world - it is also documented their fall from those heights. The challenge now is to elevate the slow rise in recent years of the Hungarian national team and their clubs on the European stage.

The oldest football team in Italy and the oldest Italian football club still active - Genoa are one of the most successful sides in Italy. It is not Roma, Lazio, Fiorentina or any other large names which follow Inter, Milan and Juventus - but rather it’s Genoa with 9 titles to their name who prop fourth in the league title table. They also were included in the International Bureau of Cultural Capitals and the Club of Pioneers which emphasises their cultural and historical importance to Italian and European football. All that success and heritage came in the pre-WW2 era, and they most recently find themselves relegated to Serie B.

The oldest club in Scotland and the oldest outside of England and Wales - to say Queen’s Park is a historical club does them a disservice. They were a giant of the early years of Association Football, easily being one of the biggest clubs in the World while also being pioneers of ‘combination’ football - or better known as the passing game. They have the third most amount of Scottish Cup’s (behind Celtic and Rangers) while also being FA Cup runners up twice, and participated in one of the earliest ‘international’ competitions in the Football World Championship winning that on 4 occasions.

Athletic Club are one of the giants of Spanish football; fourth most successful club in La Liga (behind… guess who), the second most number of Copa del Rey titles behind Barcelona, one of the founding members of Spain’s top flight and alongside Real Madrid and Barcelona - never relegated. The issue is, in modern terms they do not compete with the Big 3 in Spain nor with other successful sides such as Sevilla with their European exploits. The last La Liga and Copa del Rey came in the 1983/84 season - and while two Supercopa’s are nice, they aren’t the main trophies. The potential of this club is still much larger despite their impressive trophy haul and unique policies.

I’ve always questioned if Deportivo are a sleeping giant but they are one of only nine (9) clubs to have won La Liga with being one of three to only win it once - the other two clubs (Sevilla & Real Betis) won it from WW2 and earlier which makes their win more intriguing as it was during the duopoly of Barcelona, Real Madrid and Valencia’s peak. It feels like the club could have achieved so much more, hence the reason for a potential “Fallen/Sleeping Giant” status. The club have had a rough time, falling down to the third tier recently where they remain.

I am definitely including Valencia on this list of a Sleeping Giant. Behind Bilbao and the Big 3, Valencia rank fifth for La Liga titles, have a respectable Copa del Rey tally (eight) and are one of Spain’s more decorated clubs with European trophies. Winning the Cup Winners’ Cup, UEFA Cup, UEFA Super Cup, Inter-Cities Fairs Cup, other precursor European tournaments and being Champions League runners-up on two occasions. The club is also one of the biggest in the world in terms of number of associations (registered paying supporters) and have over 20,000 season ticket holders on the waiting list. Along with all this, they also have a global reputation of being an excellent youth academy - but rather than competing at the top of Spanish and European football, they’ve been performing well under what they are capable of.


That’s it from myself, of course there are other clubs I could have selected so let me know in the comments below who you feel are a fallen/sleeping giant of the game.