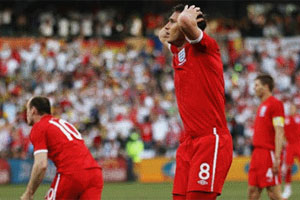 One of the biggest footballing debates over the recent years is the involvement on goal line technology. We've seen it work in ice hockey, we've seen video replays in rugby, and hawk-eye in tennis and cricket. But would it work in football? If you asked the question 'Should goal line technology be used in football?' you can guarantee most England fans would have said 'yes' immediately after the decision which denied Lampard a clear goal against Germany. However, it could be argued that there after other alternatives, that would be better to use, or that goal line technology could ruin the game.

Take the incident that occured between England and Germany at the 2010 World Cup. After the ball clearly passed the line, the goal was still not given. The goal couldn't have affected the game directly, but could have made the nation push to get the win, or another goal, which would make all the difference. It could be argued that a world class referee should have recognised that the ball had crossed the line or that his assistant should have done even though he was not in line with the goal but had a clear enough vantage point. But it seems now in the modern game that linesmen rarely give any assistance to the referee, perhaps that is because the refere has told them 'look ater the offsides and leave the rest to me.' They even give way to being overruled dubiously by referees on throw ins. Refeeres often that an attitude of superiority into the game now, which would probably rule of placing officials behind the goals for big games, even if tried in some games now.

FIFA now defend it's views regularly on the use of goal line technology, and their objection to it. One of the main arguments is universality, the need for the technology everywhere. In theory, the technology could only be afforded at the top level of football, but they feel it should be available even at the park football level if it is to be used at all. On the other hand, this issue doesn't have to go as far as goal line technology. At top matches the fourth official is in radio contact with the referee and could easily have access to television replays, so ruling could still occur throughout the match.

Others agree with FIFA but for different reasons. An argument, which I do agree with to some extent, is that television already controls the game too much, changing match times just to be televised and similar occurances. With goal line technology in place, television would entrench itself even more into the beautiful game. If players had to keep going to a video replay to see penalty, free-kick, and even corner decisions, which would be pushed even more than currently, then we may see exciting end to end football as a thing of the past.

To many fans though, this wouldn't matter. Sure, the games may last a bit longer, but the video replays could be crucial for all teams. As a Manchester United fan, I remember many of the incorrect calls given. Some for us, unfairly affecting the opposing team. This may be bad for them, but discussions after can be issues as a result of this. If a referee gets a call wrong, it is not the referee that takes wrath of the opposing team, but the fans. Take a look at Howard Webb. Due to one or two previous mistakes, other fans mock him as a Manchester United twelth player, being unbias. However, Nani's red card against Real Madrid was a game changer, and was shown to be incorrect. With video replays, the referee would have realised the sending off shouldn't have occured. It's not just goal line technology now, but technology in general.

FIFA like to emphasis the use of quality referees, something we have heard for years. Nevertheless, there is nothing they can do. Provide excellent training, but they can't three hundred and sixty degree vision, make them call everything correctly. Just like local sunday team referees, they are only human. And humans make mistakes, that can't be stopped. So as long as decisions are totally down to referee's, mistakes will be made. Goal line technology has been proven to work. It would make the game fairer, and more enjoyable for the players to be involved in. Simulation, or diving, has become a massive problem now, and could be stopped with technology. Goal line technology is the important though, and is needed soon in football, for the game to survive.

Recently FIFA have seen to take the idea that the incidents were referees are unsure in fun for the fans, getting them discussing the incidents, becoming part of the game. The Lampard incident will be discussed for years to come, but won't include fond memories. Technological changes in football are sure to be slow, but soon, surely, the use of technology in big games has to be introduced, to save the game.

We have seen technology used successfully in other sports, and more incidents like the Frank Lampard goal have occured since. Without action taken, it will be only be a matter of time until a vital goal is allowed or disallowed, say the winning goal of the World Cup Final. Imagine the drama that would cause, becoming a big issue for football. Sepp Blatter may have decided to re-open the issue of goal line technology, but that's not the same thing as accepting it. The use at the Confederations cup could be brilliant for football, being the breakthrough needed for technology.

I feel Sepp Blatter needs to take serious action in looking into the matter, as goal line technology could well be, the savior of football.